Revitalized with new ownership, the German speaker manufacturer started to rebuild its worldwide business in 2015, when it started to invest in a new team and organization, and the development of new products and an expansion of its US subsidiary, ADAM Audio USA, headquartered in Nashville. With the recent nomination of David Angress, first as CEO ADAM Audio Worldwide and now as Chairman, we have seen a reinvigorated brand presence at shows, but only now we could learn more about the company's plans.

With the introduction of the S Series, ADAM Audio reenters the highly competitive studio monitoring market with a new flagship range of nearfield, midfield and main studio monitors for audio recording and production professionals. The series shows a combination of classic ADAM craftsmanship and design, combined with a complete reengineering of the original AX and SX series, using modern materials and advanced DSP. This new 3rd generation S Series range of monitors is said to offer improved clarity and lower distortion, featuring completely new woofer and mid-range driver designs and the debut of the S-ART tweeter, a newer, even more precise version of ADAM’s remowned X-ART hand-built tweeter. 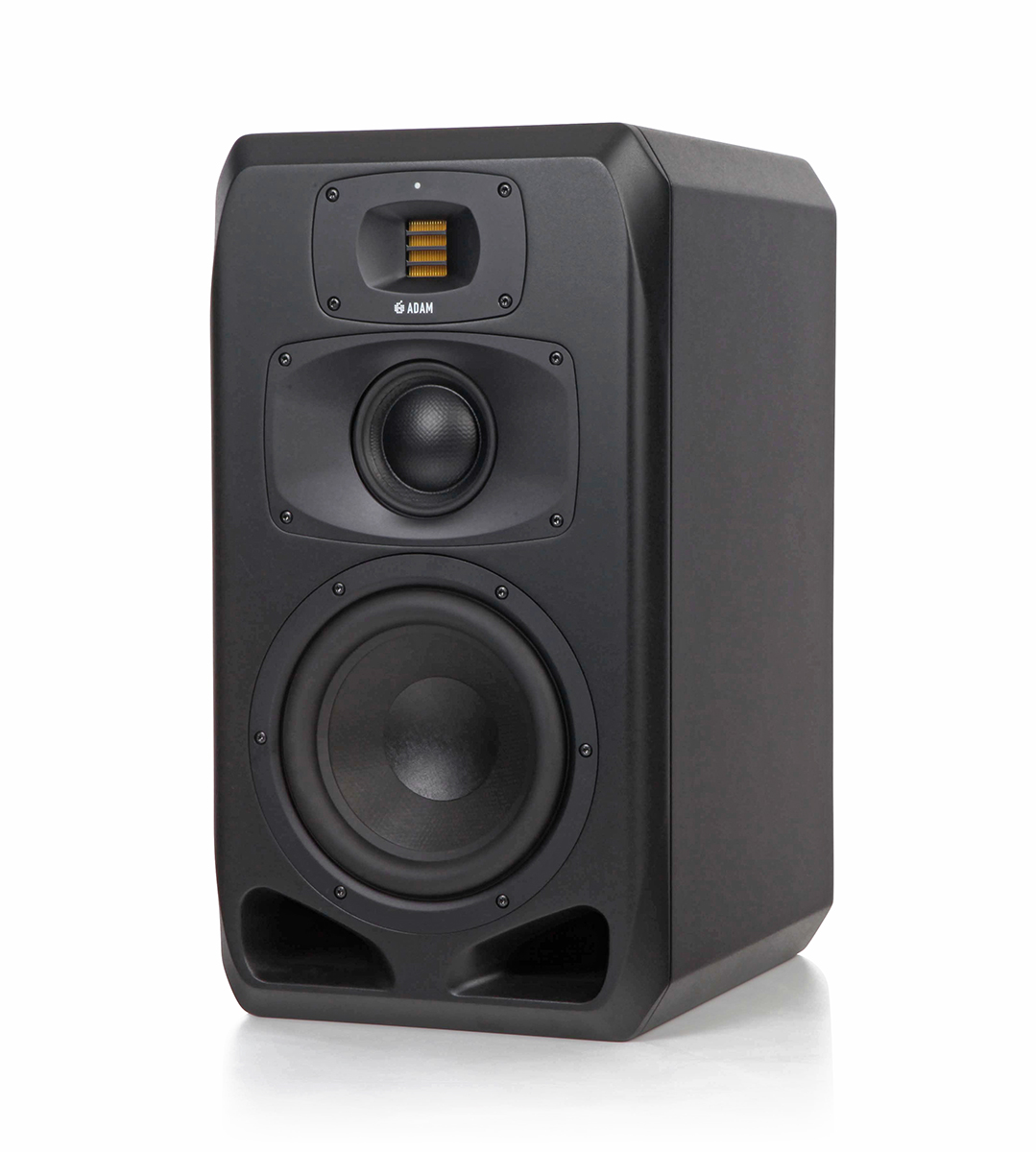 The DSP engine provides a comprehensive array of options for in-room optimization, complemented with an intuitive OLED display on the back panels to allow control over overall level, two parametric shelving filters (one for the bass, the other for the highs) as well as six further fully parametric EQs with variable Q that may be assigned to boost or cut level at specific frequencies. Five memories are also provided to store voicing presets, including two factory default configurations: ‘Pure’ for accurate frequency response; and UNR (Uniform Natural Response), a dynamic, more natural-sounding response curve. The remaining three memories are available to store users’ own personal voicing presets. A USB connector allows software upgrades and facilitates connection to computer-based editing software, so that voicing adjustments or preset selection can be carried out without the need to access the rear panel of the monitors.

The mew S Series ELE bass driver was created especially for and in parallel with the S Series cabinet and bass-reflex system, combining low weight, optimized inner damping and a highly rigid honeycomb cone, in conjunction with a basket which has been developed to eliminate unwanted resonance and distortion. Another notable feature of the ELE driver is its mechanical suspension, which operates optimally even over large excursions in either direction, allowing bass frequencies to be reproduced without distortion at high SPLs. The newly created long-throw speaker surround was also carefully engineered to be considerably more resilient than competing modern designs.

The new DHC 100mm (4 inch) mid-range driver, also custom designed by ADAM Audio’s engineering department for the S Series, is a hybrid design: part cone and part dome driver, audibly improving transparency in the critical mid-range even with high output levels. The DCH’s output extends down an octave further than competing mid-range drivers (as far as 200 Hz), ensuring a clean and consistent dispersion without tonal coloration. This new driver is manufactured using a specially laminated carbon composite material and behaves as a piston up to 8 kHz (one and a half octaves beyond its operational frequency response), avoiding unwanted vibrations. According to ADAM, the DHC design also allows it to be placed nearer to the S-ART treble driver, creating a more coherent sound source.

Several features resembling those from the ELE bass driver also appear on the DCH, suitably adapted, such as the linear magnet assembly and suspension and damping systems, vented pole piece, the heat-dissipating chassis/basket, and the large 65 mm (2.5 inch) voice coil. There are a few differences: for instance, the mid-range driver surround is manufactured from a specially formulated foam material. 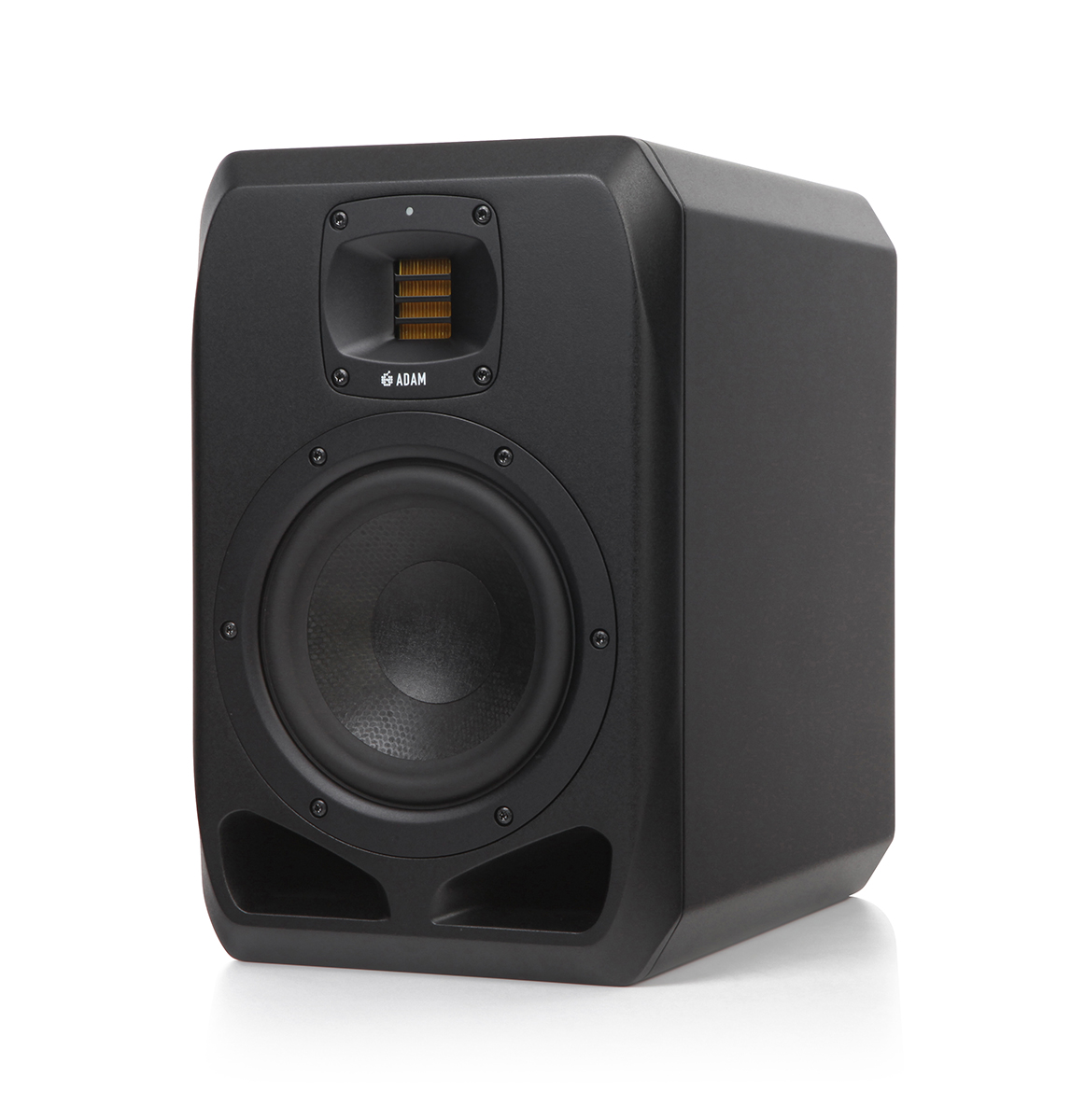 The S Series also marks the debut of ADAM Audio’s S-ART tweeter, the latest iteration of the renowned accelerated ribbon design for which the company is famous - details of which are still to be revealed. The company mentions "tighter tolerances than ever before," combined with a "newly designed, solid aluminum waveguide (HPS - High-frequency Propagation System), which makes dispersion more consistent and imaging more stable over a wider area." This HPS waveguide is milled from a solid block of aluminum, providing an even, uniform consistency, broad in the horizontal axis but tightly focused in the vertical plane. The S5H and S5V models feature an additional waveguide on the DCH mid-range driver.

The cabinets of the entire S Series Line are solidly constructed from thick, vibration resistant material to reduce unwanted resonance and coloration, even at the highest listening levels. The design also features large-radiuses rounded edges, which help to minimize unwanted edge-diffraction effects. The robust finish of the S Series line is built to offer extra protection to withstand the stresses and strains of daily life in a recording environment.

The S Series line is scheduled to be available in February 2017, but during NAMM 2017 ADAM Audio was conducting only private demo sessions, which points to a later release.
www.adam-audio.com
related items