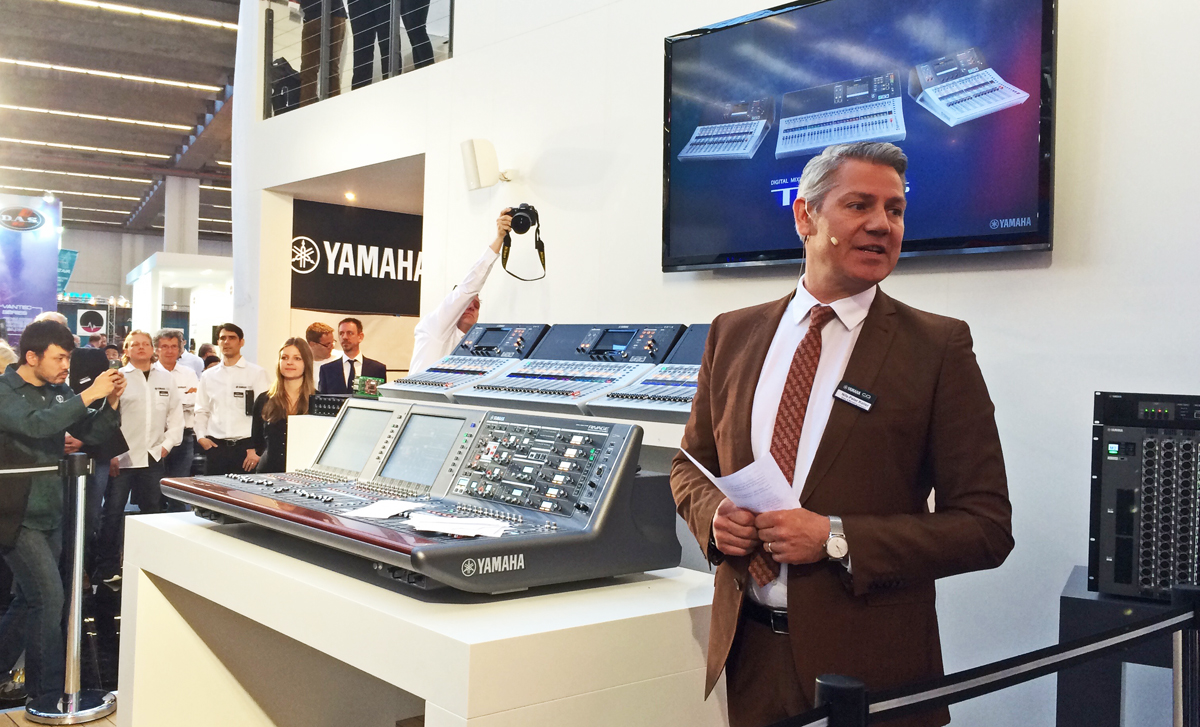 The launching of the compact and affordable TF Series mixers at the Prolight+Sound 2015 show has somehow reduced the attention deserved by the new flagship Rivage PM10 large scale digital mixing solution, which also significantly increases the quality and versatility necessary in a live sound environment, and inherits features from the renowned PM Series Consoles.

During the InfoComm 2015, the same will probably happen and certainly the TF Series deserves all the attention. But for all those rental and touring companies which have to deal with large scale productions, the Rivage PM10 with its evolved features and performance will be the one to consider. After all, the new PM10 is undoubtedly another major milestone for Yamaha sound reinforcement consoles.

The PM10 system is comprised of the CS-R10 control surface, DSP-R10 DSP engine, RPio622 I/O rack, three types of RY cards, and two types of HY cards. Together as a system, it provides the flexibility to configure and ideally match the scale and functional requirements of any audio application. 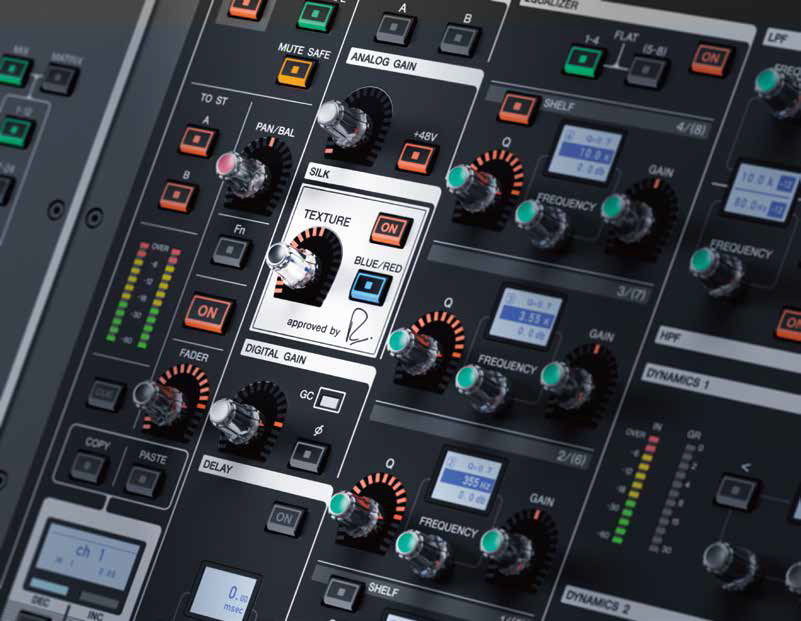 Under the fundamental philosophy of Yamaha live sound consoles, Hybrid Microphone Preamplifiers have been newly-developed, as has the analog section both in terms of components and overall design, achieving an extraordinarily pure, natural sound. Impeccable models of the Rupert Neve Designs (RND) transformer circuitry and acclaimed SILK processing have been created utilizing Yamaha’s VCM (Virtual Circuitry Modeling) technology. The SILK processing feature even includes selectable “Red” and “Blue” characteristics, and a continuously variable “Texture” knob that facilitate sonic shaping right at the input stage, adding musical sparkle or power as required.

The channel EQ and dynamics have been significantly upgraded with three newly developed algorithms plus the classic Yamaha “Legacy” algorithm. The new “Precise” algorithm includes Q parameters on the low and high shelving filters that allow filter overshoot to be flexibly controlled for added musical impact. An “Aggressive” algorithm has been designed for the most musical response, and the “Smooth” algorithm offers smooth, natural control while retaining the fundamental character of the source. Two Dynamics stages are provided, each functioning as a gate, compressor, ducker, or de-esser as required. Two compressor types are included: “Legacy Comp” features standard Yamaha digital console compressor characteristics, and “Comp260,” a VCM model of a popular analog comp/limiter from the mid-70s.

A total of 45 plug-ins are available for creative processing, with substantially increased processing power. New and noteworthy are plug-ins created in collaboration with Rupert Neve Designs, TC Electronic, and Eventide.
Collaboration with Rupert Neve Designs has resulted in the “Rupert EQ 773,” “Rupert Comp 754,” “Rupert EQ 810,” and “Rupert Comp 830,” all VCM models of Neve designed outboard devices from the 70s and 80s. All four models deliver the gloriously musical vintage outboard sound still favored by many discerning engineers. The alliance with TC Electronic has resulted in the inclusion of two new reverb plug-ins: the “VSS4HD” room simulation reverb that offers a multitude of reflection settings with musical-sounding reverb processing capabilities, and the “NON LIN2” plug-in that can function as an envelope-filtered gate reverb without requiring a trigger. With Eventide, Yamaha will add the H3000-Live Ultra-Harmonizer as a future standard inclusion. 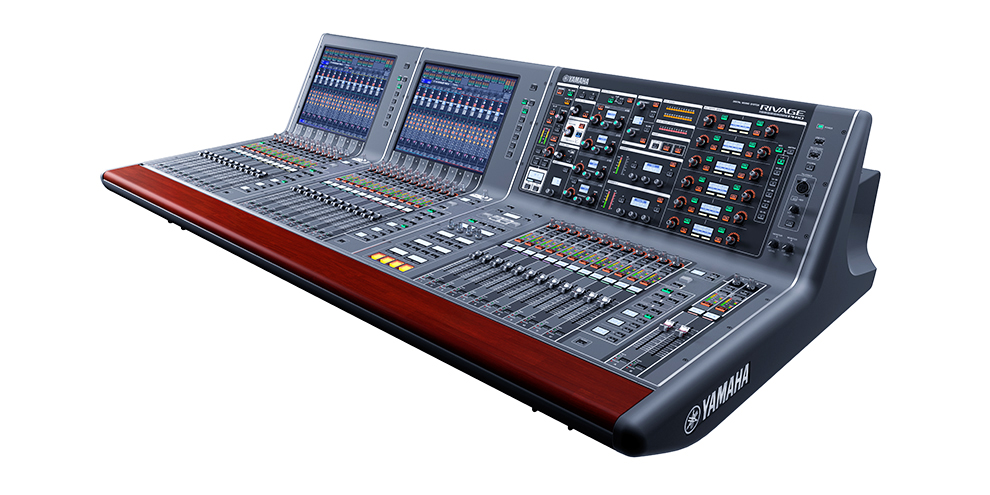 Console operation has been given the utmost attention with the Yamaha-familiar Selected Channel section implemented in full, allowing all parameters of the selected channel to be directly and intuitively controlled. There are also two large LCD touch screens that provide logical continuity with the faders, offering the same operability as the highly regarded Centralogic interface in 12-channel groups. In addition to this dual interface hybrid operation style, horseshoe-ring encoder position indicators, refined panel layout, and several other details contribute to significantly improved overall operability.

New features extend the usefulness of the scene memory: “Isolate” enables the engineer to specify entire channel modules including EQ and dynamics libraries, etc., that will be protected from recall operations without altering the Recall Safe settings; significant for situations where scene memory is heavily used. The Overlay Filter can be “overlaid” on a current mix to apply temporary offsets to fader and mix/matrix send levels independently from Scene Recall - valuable in situations that require sudden changes and the ability to easily revert to the original settings.

The CS-R10 control surface and DSP-R10 DSP engine are connected via a dedicated CAT5e ring “Console Network.” The DSP engine connects to the RPio622 I/O racks via the newly developed TWINLANe ring network using multi-mode optical fiber. The fact that both networks use simple ring connections facilitates redundancy and the highest possible reliability. TWINLANe is an original Yamaha protocol that can handle up to 400 96kHz audio channels over distances of up to 300 meters with low latency and redundancy for high reliability. Up to two DSP-R10 DSP engines and eight RPio622 I/O racks can be connected in a single ring.

Connection to a computer for multi-track recording, connectivity to the Nuage Advanced Production System, Yamaha CL and QL Series Consoles, as well as other external equipment is possible via a Dante network. Dante, designed for simple setup with an extremely wide range of professional audio devices, works ideally with TWINLANe to create an exceptionally flexible, reliable system overall. 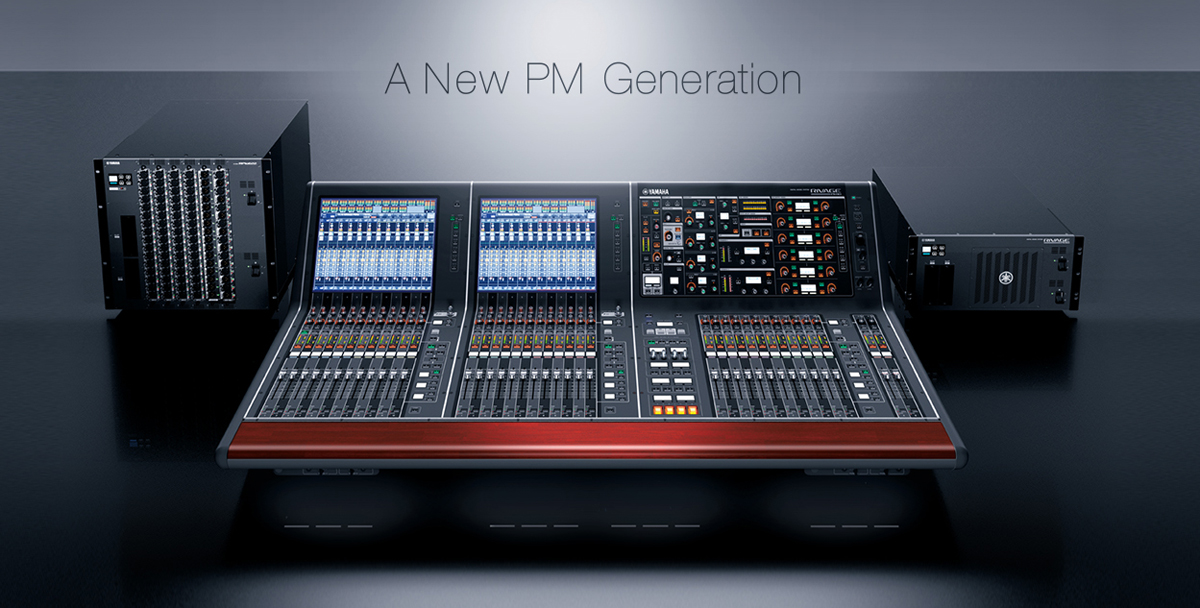 The RPio622 features six of Yamaha’s new RY card slots, into which can be inserted three different types of I/O card, providing up to 96 mic preamps per rack. A new, optional HY-Dante card can also be used to integrate multitrack recording or other hardware, including other Yamaha digital consoles. In addition, the RPio622 and DSP-R10 feature the new HY card slots (two and four respectively) for further I/O, while all three hardware components of the system feature two of Yamaha’s familiar MY card slots. As a result, a fully-expanded Rivage PM10 system can accommodate over 2000 I/Os.

Other new features of Nuendo 7 to assist with day-to-day workflow include an updated user interface, with a new workspace organizer for free window placement on any display, a redesigned Track List and Inspector for better readability and a new Rack Zone to the right side of the Project window.

Also provided are a number of new and updated plug-ins, as well as a new plug-in manager which allows users to arrange, sort and group effects/instruments and create plug-in subsets. Meanwhile, faster, simpler handling of content is facilitated by audio track import from other Nuendo projects from within an opened Nuendo project, while improved performance through ASIO-Guard 2 technology delivers vastly improved project loading times and advanced automatic latency management, even on CPU-demanding projects.

With updated support for Yamaha’s Nuage integrated audio production system and enhanced integration with EuCon-based consoles, Nuendo 7 will be available Summer 2015.
The new Rivage PM10 will be available this year.
www.yamahaproaudio.com
related items