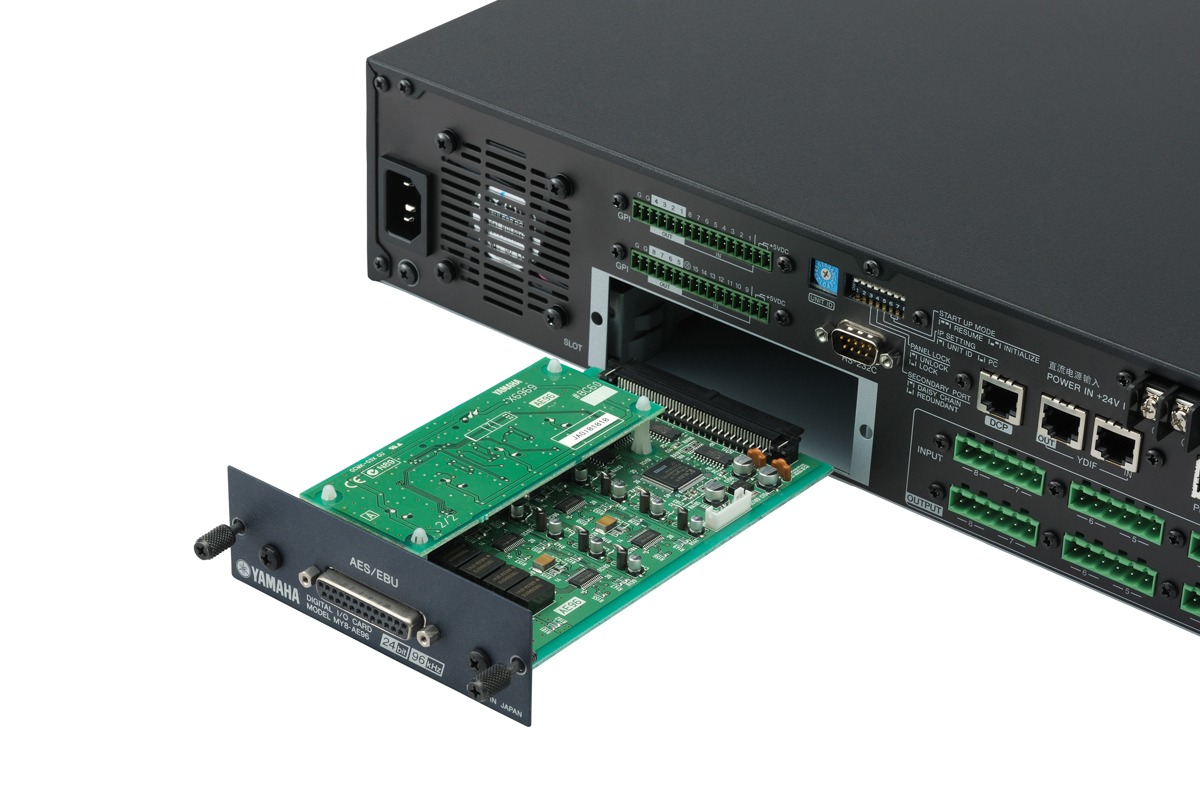 Scheduled to ship in the summer of 2015, the MRX7-D features eight mic/line analogue inputs, eight analog outputs and two stereo RCA inputs, with an onboard mini-YGDAI card slot allowing local I/O expansion and connection to other digital audio products. Also featured is 16 channels of Yamaha’s proprietary YDIF I/O and 64 channels of Dante I/O. The MRX7-D can feature a total simultaneous I/O count of up to 110 inputs and 104 outputs.

Yamaha’s proprietary YDIF delivers 16 bidirectional channels of audio and word clock transmission via standard CAT5e cable over distances of up to 30 m. It allows cascading of multiple MTX processors as well as signal transfer to CIS series XMV power amplifiers via connections that are fast and simple to set up, significantly reducing installation times for contractors. In addition, the inclusion of Dante on the MRX7-D allows straightforward integration with a wide range of Dante-enabled products in larger system applications.

The MRX7-D delivers significant benefits for conference applications, including onboard Dan Dugan automated mixing and newly-designed Acoustic Echo Cancellation (AEC), which will be capable of being controlled from Revolabs Executive Elite boardroom-ready wireless microphones via a future software update. Revolabs is now a member company of the Yamaha group.
Dan Dugan auto mixing has been a hugely popular feature of recent Yamaha digital mixers and it is included as standard on the MRX7-D, delivering the de facto standard of auto mixing available today.

A further key feature of the MRX7-D is Yamaha’s patented Speech Privacy system. The first pro audio product to include this technology, it addresses the growing need to protect privacy in conference rooms and meeting areas, using an original sonic masking technique created from human voices to mask the intelligible content of speech. The MRX7-D includes the ability to generate this unique proprietary algorithm, and then to control and distribute it.

“We have been very excited to work with Yamaha on the MRX7-D. Clear, understandable speech in audio and video conferencing has always been a challenge for users. The combination of the Dugan Speech System algorithm with Revolabs microphones will make the MRX7-D an unbeatable voice processing system in the commercial market,” says Dan Dugan, CEO of Dan Dugan Sound Design Inc.

“The new MRX7-D will open up a new market opportunity for Yamaha,” adds JP Carney, CEO of Revolabs, “Yamaha has a vast wealth of technology and the introduction of this state of the art product will deliver yet another best in class solution.”

Featuring RS232C and Ethernet connectors to facilitate connection to a variety of external controllers, including those by AMX and Crestron, the MRX7-D can also be controlled by Yamaha DCP series control panels, the Wireless DCP app and Yamaha’s new ProVisionaire Touch app. Fast, straightforward setup is available via Yamaha MTX-MRX Editor software.
Ken Hiraoka, Yamaha Pro Audio Department Manager comments, “After we launched the MTX Series, we received many requests for open architecture products. The MRX7-D answers the need for open architecture DSP design and adds another significant element to the CIS series of processors, amplifiers and loudspeakers. In addition, the collaboration with Revolabs and Dan Dugan Sound Design helps Yamaha to realise a new era for conference applications. We will further enhance this area with additional products in the future.”

ProVisionaire Touch iPad App
At the 2015 InfoComm show in Orlando, Yamaha also announced the launching of its ProVisionaire Touch application for iPad, available via download on iTunes. This application enables wireless remote control of MTX/MRX series signal processors via custom control panels that can be easily designed by the user to meet the needs of individual commercial spaces such as conference rooms, retail stores, restaurants, banquet halls, and more.

Completed control panels can be exported as data files. The exported data files can be used as templates for multiple iPads at the same installation, or when setting up a new installation at a separate location, while making a notable difference in set up speed and efficiency.

Since MTX/MRX devices are controlled via Wi-Fi, the iPad can be mounted on any convenient wall surface for use as a wall controller, or handheld, for maximum remote control freedom and convenience.

“MTX and MRX installs can take advantage of this great tool without adding any significant cost for a control system, states Marc Lopez, Marketing Manager, Yamaha Professional Audio. The design is created from within the App, so no PC or Mac software is required, and customers’ logo, artwork, and photos can be incorporated to create a truly custom control environment.”
www.yamahaproaudio.com
related items