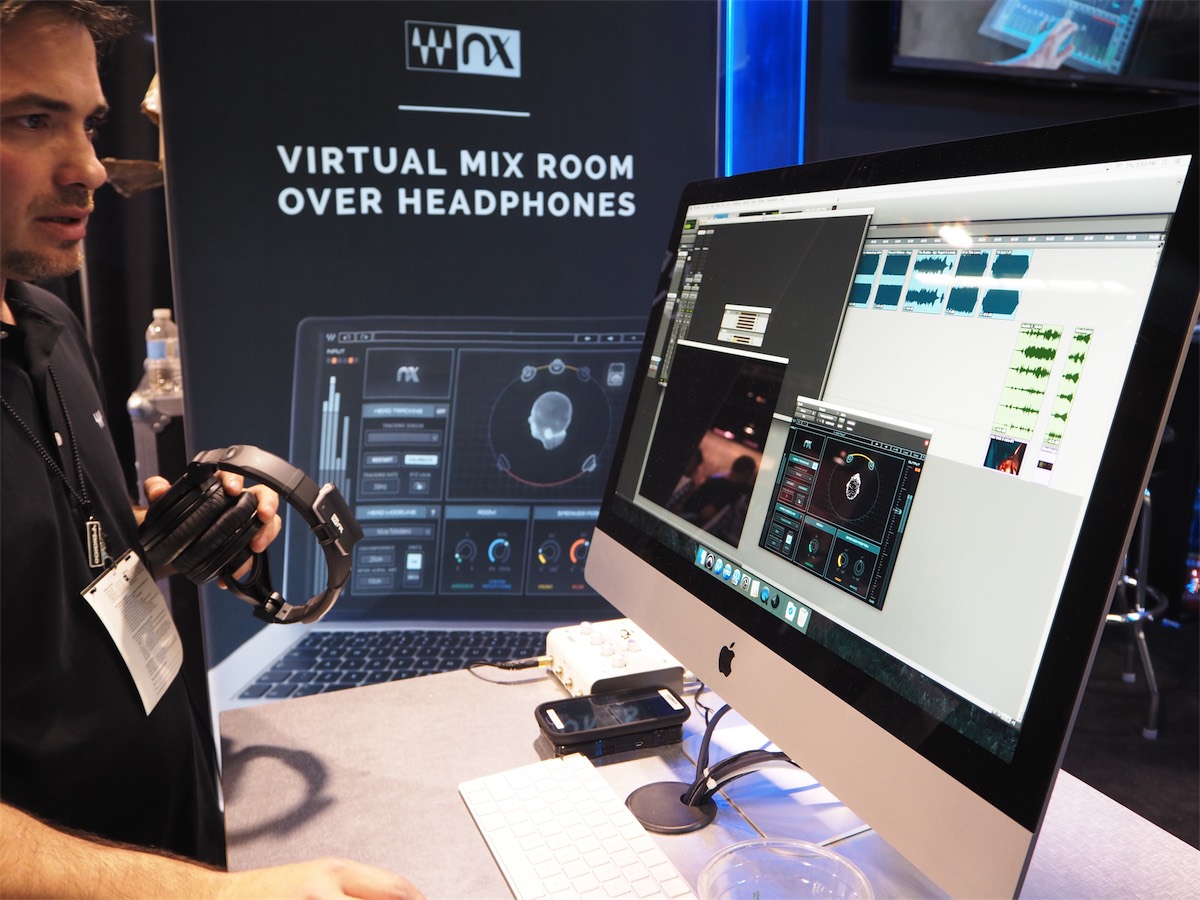 According to Waves, Waves Nx offers the optimal acoustics of a great mix room – right inside standard headphones. Powered by Waves’ Nx technology, this plugin allows the user to hear, on headphones, the same natural depth, natural reflections, and panoramic stereo image generated from speakers in an actual, physical room. The company says the software offers all the advantages of headphones, such as portability, affordability, and privacy, with “all the acoustic benefits of a great-sounding, fully professional mixing facility.”
Acoustics simulation is not new, but Waves states that this technology turns headphones into “a more reliable mixing and monitoring tool” and that Waves Nx “unmasks” headphone sound, “letting you hear everything with real-world dimension, rather than flat in your head. This way, you can hear all the elements of your mix accurately laid out in space, just as you would in the sweet spot of a beautiful-sounding room.”

Now, the strange part is that many headphone manufacturers, including some of the brands selling professional monitoring headphones claim their products allow exactly that: to hear all the elements of a mix accurately laid out in space, because direct headphone reproduction doesn’t suffer from the inaccuracies of acoustic environments, no matter how good they are.

Waves also describes the benefits of its Nx plugin as bridging “the gap between monitoring on speakers and monitoring on headphones: no longer do you have to worry that what you’ve mixed on headphones will sound different once you switch to speakers. By letting you hear on headphones the same natural depth and stereo spread you would be hearing on external monitors, Waves Nx puts an end to constant cross-referencing between the two.” That makes a little more sense. That is, mixing with headphones and being able to actually hear a mix sounding in different acoustic environments to detect eventual masking effects, for instance.
Waves states that by delivering the natural listening experience of a physical room, Waves Nx makes the headphone experience comfortable and ear-friendly over long periods of time. So effectively, this allows spending more hours working with headphones without getting tired. And to Waves credit, the company certainly holds a great record regarding audio DSP solutions, psychoacoustic signal processing algorithms and other key technologies in this area. Waves technologies are used everywhere to improve sound quality in virtually every sector of the audio market, from recording, mixing, mastering and post-production to broadcast, live sound, and consumer electronics.

The intriguing part about Waves Nx comes when the company asks: “Want to mix for 5.1 surround on your regular stereo headphones?” Apparently, Waves Nx lets you do exactly that. Mixing 5.1 surround information over headphones and, most important, “without coloring the sound in any way”. According to Waves, what we hear in the mix, is exactly the way we want it to sound – only now we have a more accurate way to monitor it on headphones. And to help support spatial positioning, the bright minds at Waves have combined visual tracking using any web camera on the computer to do real-time head tracking. Taking advantage of the computer’s camera or the Waves Head Tracker hardware unit, the user is able to “follow” the sound positioning when moving the head, like we would do in the real studio. The difference is that we are using a Virtual Mix Room.
This type of head tracking feature for surround sound experiences was previously implemented by beyerdynamic in its Headzone system, used mainly for gaming. But the beyerdynamic Headzone was intended for entertainment, while the Waves wireless device is intended for professional applications. According to the company, the Nx Head Tracker for Headphones tracks head movements in 360 degrees in order to enhance the realism of the Nx Virtual Mix Room plugin for headphone monitoring. The compact device latches on to the headphones and enables the Nx Virtual Mix Room plugin to follow head movements in real time with full accuracy. Used in conjunction with the plugin, it allows hearing the acoustics of a professional mix room and sense of space – with headphones. Waves says this enables to “make better decisions about depth, balance, panning and stereo image while mixing on headphones”.
Waves is into something here, I am certain that companies like Oculus Rift will love this concept, coupled with their VR goggles.

The question regarding this Waves Nx concept has to do with the notion of “great acoustics” and how beneficial it is simulating the acoustics of a “professional mix room” on headphones. In reality, Waves simply claims this type of simulation helps to create a “natural depth and real-world stereo image” over headphones, bridging the headphone/speaker gap to “put an end to constant cross-referencing between headphones and speakers”. Mixing for 5.1 surround on regular stereo headphones could be seen as a “creative bonus”.

And creative is certainly Waves’ promotion of the Nx concept. See their videos here and here.
www.waves.com/plugins/nx
related items