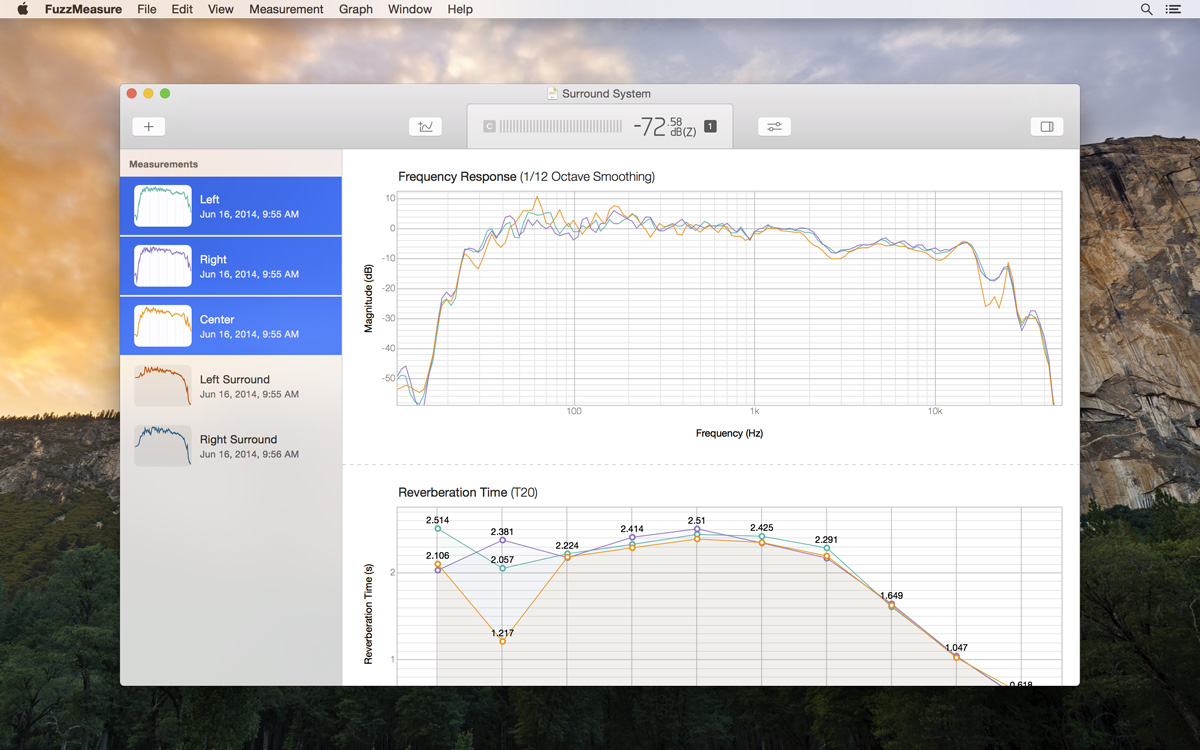 “When customers first experience FuzzMeasure, their initial reaction is to the design and approachability of the software,” says Chris Liscio, SuperMegaUltraGroovy’s President and FuzzMeasure’s chief developer. “I have a deep respect for FuzzMeasure users’ time and expertise, and feel that they deserve a product that is as enjoyable to use as it is powerful.”

FuzzMeasure is known industry-wide for its easy-to-use, stunning interface offering one-click measurements with extensive Core Audio hardware support for multichannel devices and sample rates up to 192 kHz. Now FuzzMeasure 4 greatly improves  on the software’s most valuable asset with its all-new graphing interface.

18 Graphs Displayed in any Combination
FuzzMeasure 4 allows users to combine any of its 18 powerful graphs with any other—enabling thousands of different ways to visualize measurements in ways that were never before possible. Even FuzzMeasure’s more advanced Waterfall and Reverberation Time (RT60) graphs can now be viewed and printed alongside the others. 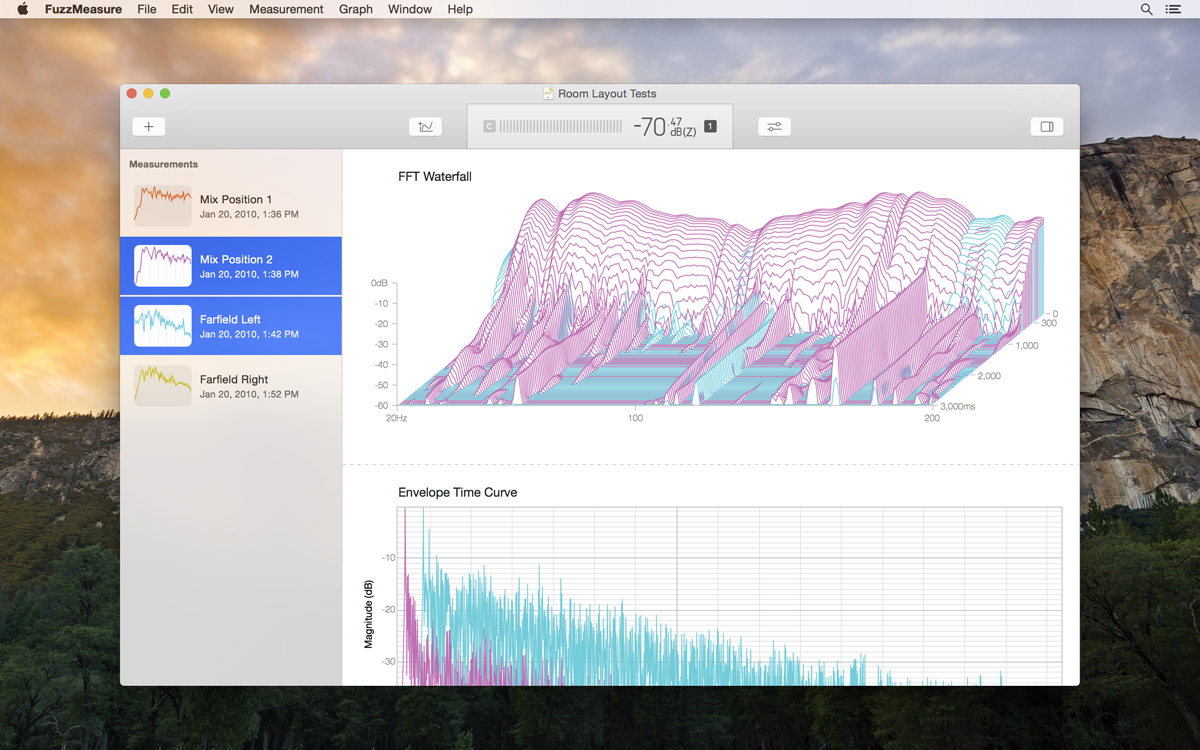 The changes in FuzzMeasure 4 that led to greater flexibility in its graphs also brought about an improved environment for the development of new ones. In this release, users will now also find additional acoustics graphs such as Clarity, Definition, as well as an improved Reverberation Time (RT60) calculation and separate Early Decay Time (EDT) graph. Furthermore, all fractional octave graphs can be visualized as filled line graphs as well as the classic bar style, enabling comparisons between measurements.

The popular Waterfall graph has also been completely redesigned to enable improved printing support and the ability to compare multiple records—something that was never before possible. In addition, more controls are offered to allow modifications to both time- and frequency-domain resolution in this highly valuable plot.

Over 10 Years of FuzzMeasure
FuzzMeasure first launched in 2004, and to celebrate its 10-year anniversary SuperMegaUltraGroovy reached out to its diverse user base that includes professionals in the recording, pro audio, AV integration, R&D and manufacturing industries to gather a collection of testimonials and case studies for their product website.

“At Flux Studios, we use FuzzMeasure to check and tune our current rooms regularly[…] After much tweaking by ear, we needed to confirm what we felt with real data. FuzzMeasure does it for us. It’s part of our life long fanatic quest for the perfect sounding room.” — Fab Dupont, Producer and Mix Engineer (Shakira, Jennifer Lopez, Bebel Gilberto, Toots & the Matals, Kirk Whalum, and more)

“To be able to show both the Waterfall and RT60 graphs at the same time, without having to close one and then open the other, will save a lot of time as far as clients grasping the scope of problems in the space.” — Chris Owens, Studio Designer and Room Acoustician (Diplo, Atlantic Records, VICE, Disney Studios, Jerry Cantrell, Dillon Francis, Justin Warfield, DJ Frank E, and more)

“I’m not a trained acoustician, I’m an audio engineer. I’m not the guy designing rooms on a piece of paper, but I can tell you if a room sounds good or not. And I can usually tell you why, and how to improve the room… Every piece in the room makes such a difference in the sound of the room. That’s why I like FuzzMeasure. A lot of clients just want you to tune the room fast and FuzzMeasure has definitely expedited the process.” —Tony Terrebonne, Studio Designer and Grammy-nominated Chief Engineer at ZAC Recording (Akon, Oteil Burbridge, Modest Mouse, Prince, Usher, Outkast, and more)

“The response to our outreach was heartwarming. With such a product that appeals to busy professionals and does its job so well, we rarely hear from customers seeking support,” says Chris Liscio. “Once we put the call out, we were so pleased with all the positive words of encouragement and support.” 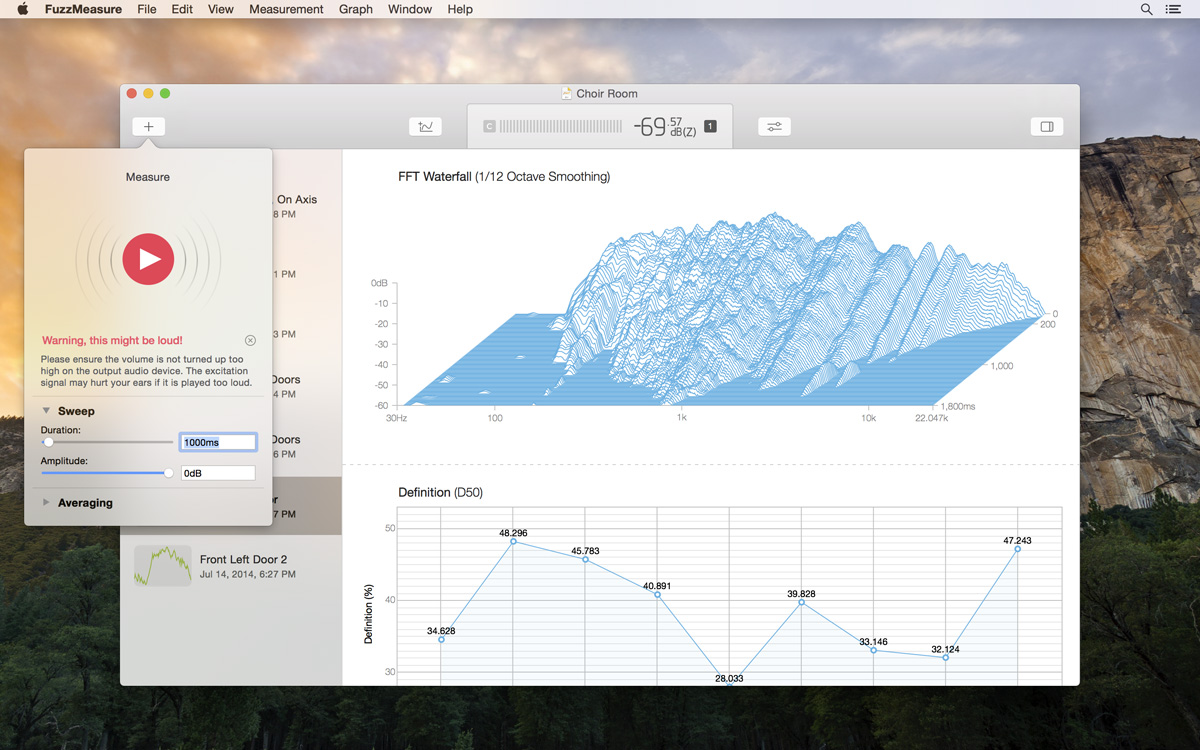 New Personal License Pricing
In addition to professionals, FuzzMeasure has become popular among audiophiles and home theater enthusiasts around the world. To address this segment of the market, SuperMegaUltraGroovy has introduced a lower-priced personal licensing option to address the needs of hobbyists. “FuzzMeasure grew out of a need that I discovered while building a set of loudspeakers for myself, so making it easier for more people to pursue their audio-related hobbies felt like the right thing to do.”

In 2006, Apple first recognized SuperMegaUltraGroovy’s work by awarding FuzzMeasure with an Apple Design Award in the Scientific Computing category. “When I found out that FuzzMeasure received Apple’s praise for outstanding design and innovation, I knew that I was on the right track by striving to make this technology more approachable,” adds Liscio. “FuzzMeasure 4 represents a major leap in FuzzMeasure’s design and underlying technology, paving the way forward for the next ten years.“

Making Swift Technological Leaps
Almost a year ago, Apple introduced a new programming language called Swift that was designed for safety and performance while also allowing for integration with existing Objective-C code. By leveraging the Swift programming language for new UI features, FuzzMeasure 4 rapidly gained new functionality while minimizing the potential for crashes and other common programming errors.

“By allowing me to leverage FuzzMeasure’s existing Objective-C code base, I was able to safely test the waters with new feature additions while still relying on existing, proven code,” says Chris Liscio.

As FuzzMeasure’s development cycle moved on, Swift’s expressiveness led to even more improvements behind the scenes. “Once I warmed up to the language and hit my stride, I wrote almost all of FuzzMeasure’s new code using Swift, including an all-new multithreaded calculation engine for the Waterfall Graph that speeds up its calculation significantly,” Liscio adds. “I’m really excited about what the future holds for FuzzMeasure given the foundation I built for 4.0.”

Pricing & Availability
FuzzMeasure 4 requires OS X Yosemite and is available for purchase at fuzzmeasure.com. FuzzMeasure pricing starts at $99.99 for personal use, and is $499.99 for commercial use including a one-year Software Maintenance Subscription. Educational pricing information and an upgrade offers can be found at fuzzmeasure.com/buy
supermegaultragroovy.com
related items