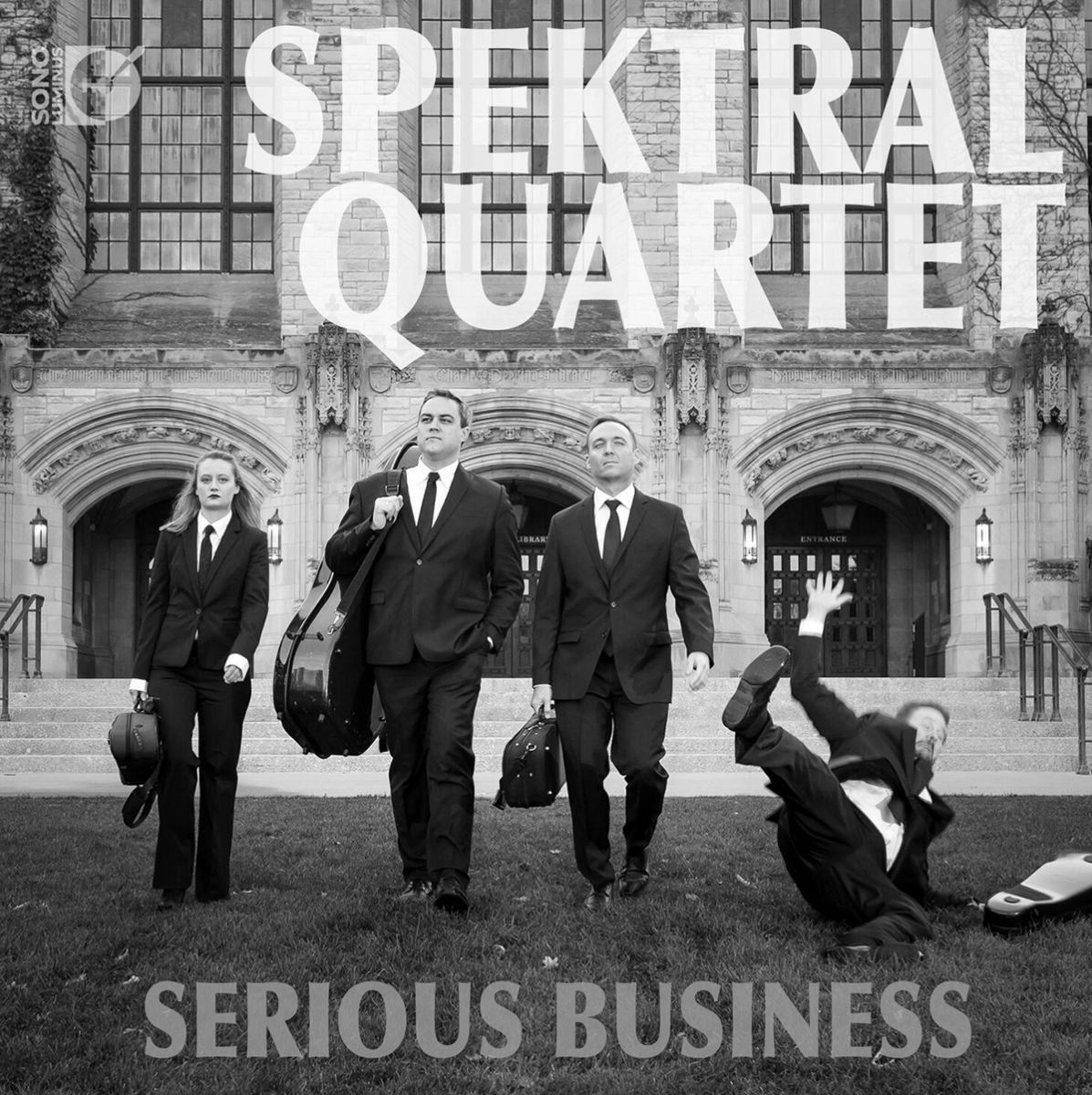 Sono Luminus and Auro Technologies announced the upcoming release of the new Spektral Quartet album called ‘Serious Business’. The album is recorded in Auro-3D and will be released with an Auro-3D mix alongside traditional Stereo and 5.1 mixes. The Auro-3D mix creates an exciting three-dimensional soundscape thanks to the addition of a height layer above and around the listener.

“Serious Business” by Spektral Quartet is an album comprising four different perspectives on humor through the lens of classical music – a flavor of music that could use a little more funny, in general. According to Sono Luminus, this is an album about what makes something funny, and more importantly, “a clever collection of music, unequivocally worth entering the cave for.” Furthermore, the album includes world premier recordings of works by Sky Macklay, David Reminick and Chris Fisher-Lochhead.

As the record company states, “Since its inception, the Spektral Quartet has sought out the discourse between the great works of the traditional canon and those written this decade, this year, or even this week. Creating connections across centuries, the group further invites its listeners in with charismatic deliveries, interactive concert formats, and bold, inquisitive programming. Spektral Quartet is considered one of the most dynamic and forward-thinking quartets in the US and beyond, and with great reviews, it appears that the Spektral ensemble has a special knack for finding a satisfying balance of style, soul and seriousness.”

“The ensemble is regarded for its forward-thinking endeavors and frequently works with new composers as well as expertly performing standard string quartet repertoire, whilst finding vehicles for bringing classical music into everyday life. The Spektral Quartet prioritizes immersion and inclusivity and this is where the ensemble’s music and Auro-3D fit together so beautifully. The Auro-3D format is able to achieve the up-close atmosphere the Quartet is striving for with their music.”

According to Collin J. Rae, CEO with Sono Luminus, “after launching the first three albums with Auro-3D included, we were convinced of the potential behind the format. After the Immersive Audio Listening Experience, organized together with Auro Technologies, 2L, Pure Audio Blu-Ray and PMC Speakers during the 2015 AES Convention, we had a whole community confirming the creative possibilities that are still ahead. Launching yet another album with Auro-3D just felt as a natural extension.”

Wilfried Van Baelen, inventor of the Auro-3D format and CEO of Auro Technologies, states: “We feel fortunate that many partners and more particular music labels see the added value the Auro-3D format can bring to music in all genres and its audience. With this album, and many more recordings and movie titles to come, we are looking forward to 2016.”

The music was recorded in Auro-3D, delivering a natural immersive sound experience, capturing the music’s true emotion and bringing it alive via the Auro-3D mix. Auro-3D is an exciting move from two-dimensional surround sound formats to three-dimensional sound, achieved by adding the missing dimension in sound ‘height’ (in front of and all around the listener). Auro-3D is the only sound system on the market that has both 5.1 Surround and Auro 9.1 in just one standard PCM delivery file with high resolution audio in each channel, making easy distribution on any system in the world possible.

Thanks to this fully backwards compatibility, Auro-3D mixes of film or music are released on standard Blu-ray discs. The new Spektral Quartet album will become available on Pure Audio Blu-Ray via Sono Luminus and will become available as of January 29th 2016. These will be available via Naxos through all major physical retailers worldwide as well as via online channels such as Amazon.

About Sono Luminus
Sono Luminus is an ultra-high fidelity record label and recording studio focusing on stereo and surround recording. They feature an eclectic mix of classical music ranging across centuries from early music to the contemporary avant-garde. Allowing for natural ambient acoustics to determine optimal microphone placement with minimal processing, Sono Luminus has become a first choice for a variety of dynamic musicians, both established and emerging. Sono Luminus boasts over 100 titles and owns the Dorian label archive. Sono Luminus and its artists have been nominated for 17 GRAMMYs, with 2 wins, and its studio clients include Steinway & Sons, Hännsler, Bridge, and Naxos.
www.auro-3d.com | sonoluminus.com | sonoluminusstudios.com
related items