According to Sennheiser, the successor to the legendary Orpheus electrostatic headphone and tube amplifier system will not be a limited edition. The new 2015 Orpheus will be hand-crafted in Germany from next year onwards, as long as there are pending orders. Available from mid-2016, the company will be able to produce one unit a day, each costing around 50,000 Euros or 55,000 USD. The new HE 1060 headphones and HEV 1060 amplifier masterpieces combine the most innovative technology with carefully selected, luxurious materials and highest quality craftsmanship.

In 1990/1991, Sennheiser took the audio world by storm with an engineering masterpiece that exceeded all previous ideas about the performance limitations of headphones. The Orpheus, an electrostatic headphone system with an impressive 500 V tube amplifier, became an icon of the audio industry and was recognized as the best headphones in the world. Almost 25 years later, Sennheiser is now opening up a new chapter in audio history with the successor, one that shares its famous name: “With the new Orpheus, we once again push the boundaries and show that we can repeatedly set new benchmarks in excellence and with that shape the future of the audio world,” says Sennheiser CEO Daniel Sennheiser. A team of Sennheiser experts spent almost a decade continuously working against the limits of what is technically possible to create the best headphones in the world. The new Orpheus uses an innovative amplifier concept that combines the advantages of a tube amplifier with those of a transistor amplifier. The marble that Sennheiser chose for the amplifier housing comes from Carrara in Italy and is the same type of marble that Michelangelo used to create his sculptures. “The properties of the marble optimally protect the amplifier’s core and its unique optics and structure turns each Orpheus into an individual work of art,” says Maurice Quarré, Director of Select & Audiophile at Sennheiser.

The details
Improving on the original Orpheus experience, the new 2015 system intends to impress even before we start listening. When the system is inactive, the components are all retracted and the Orpheus has the serene beauty of a marble sculpture. Gently pushing the on/off-volume control brings the sculpture to life: the control elements, each of which are crafted from a single piece of brass and then plated with chrome, slowly extend from the marble housing, before the vacuum tubes enclosed in quartz glass bulbs rise from the base and start to glow. Finally, a glass cover is raised, allowing the headphones with ear cups finished in genuine leather to be removed. 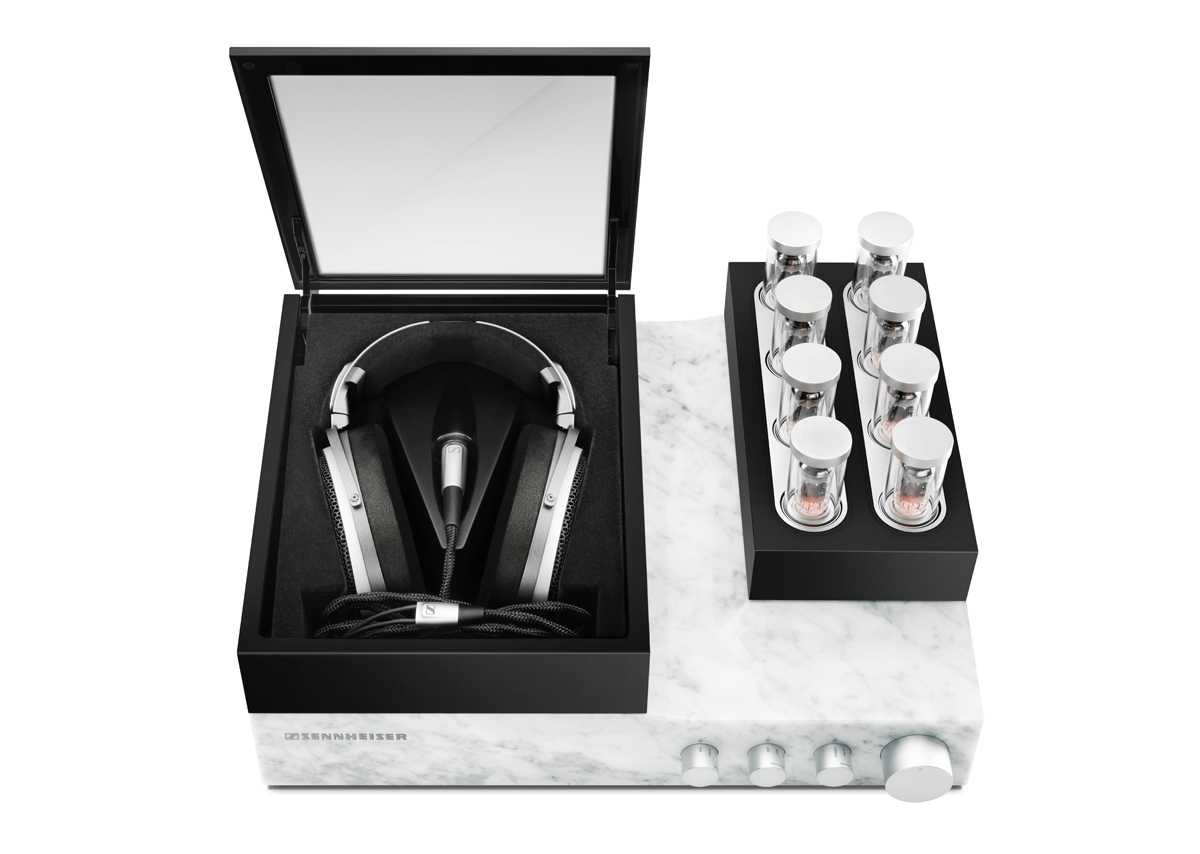 At the heart of the amplifier are eight vacuum tubes that process the incoming signal. “The advantage of tube amplifiers is their superior impulse processing,” says Axel Grell, Portfolio Manager Audiophile at Sennheiser. “However, one challenge is their sensitivity to air-borne-noise.” For this reason, the amplifier housing was crafted from granular, inhomogeneous Carrara marble and is freely suspended with the amplifier. The decoupling of the tubes in combination with the damping properties of the marble has the effect of reducing structure-borne noise to an absolute minimum. The tubes themselves also have a high-quality patent-pending enclosure consisting of quartz-glass bulbs that perfectly shield them from their surroundings.

The tube amplifier stage is followed by a patented ultra-high impulse amplifier stage that is directly integrated into the cups of the headphones. The result is impressive: a 200 percent rise in efficiency compared to other products. “In electrostatic headphones, most of the amplifier power is lost in the cable between the headphones and the tube amplifier. Only around one third of the power generated is actually used to produce sound waves,” explained Axel Grell. “Our approach was therefore to amplify the alternating voltage to high voltages not at the beginning of the cable but at the point where it is really required – directly at the gold-vaporized ceramic electrodes in the headphones themselves.”

The great advantage of this design is the extremely short distance between the amplifier and the diaphragm, which is less than one centimeter in the new Orpheus. As a result, the headphone system requires far less power for charge reversal, as the current capacities are much lower. At a voltage of only around 5 Volt, the music signal is transmitted balanced to the high-voltage amplifier integrated into the headphones and is amplified there. This ensures extremely high impulse fidelity with relatively low power requirements. Just like the tubes of the tube amplifier, the system’s MOS-FET transistors have a square characteristic curve to prevent the hard distortion that occurs in amplifiers with bi-polar transistors.

Sennheiser places the new amplifier concept in a class that the audio specialist calls Cool Class A. In the low-frequency range, Cool Class A provides Class A power at any volume. In the high- and ultrahigh-frequency range, the amplifier switches from Class A to the usual Class AB operation. That will, however, only be the case when listening to a very unusual frequency spectrum. “Cool Class A is a brilliant idea: the music signal is reproduced without distortion and the headphones remain cool,” explains Axel Grell. “We carried out extensive signal analyses and listening analyses as well as detailed tests to find out how much current we need at which frequency in order to achieve this unusual result.” 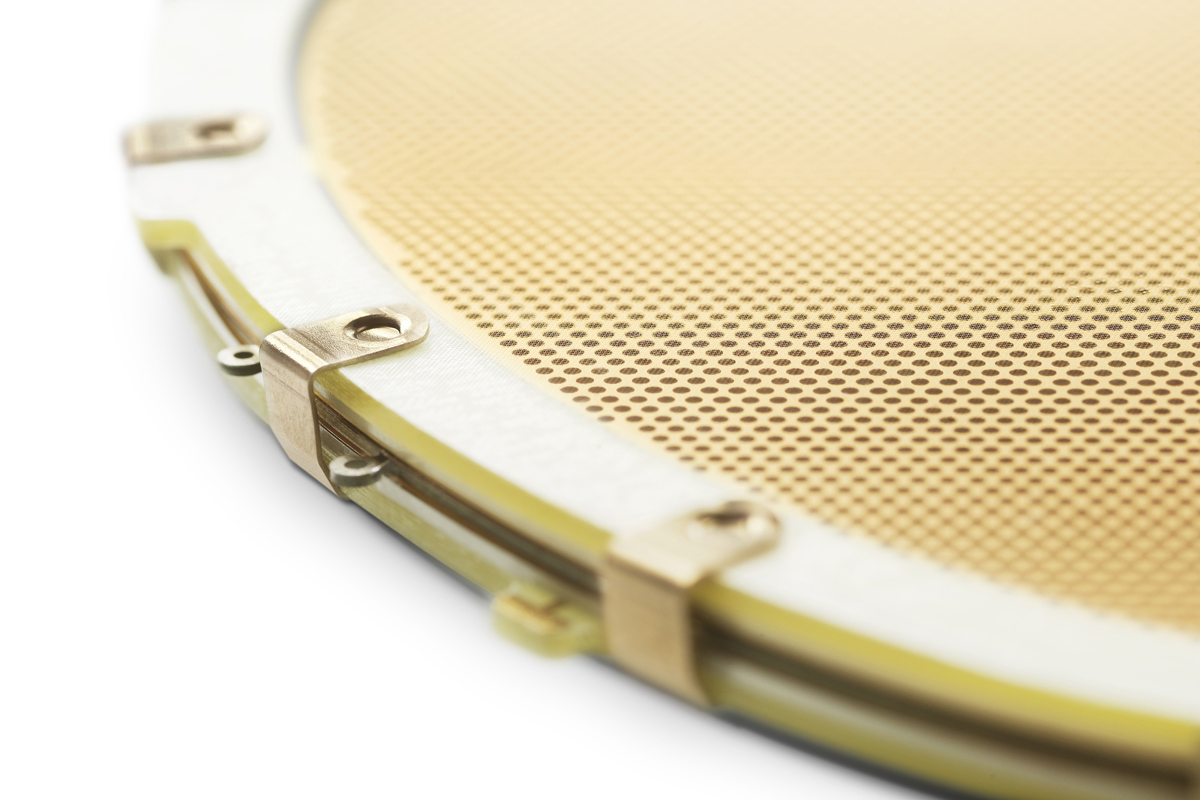 Meticulous attention has also been paid to every detail of the material selection for the Orpheus in order to fully exploit the sound potential of the reference headphones. Each of the more than 6,000 individual components was carefully chosen, their acoustic characteristics were evaluated and finally the optimum combination was put together. After all, it is the interaction between all components that is ultimately responsible for the audio quality of the headphones. For example, to ensure the outstanding performance of the acoustic unit, Sennheiser uses gold-vaporized ceramic electrodes and platinum-vaporized diaphragms.

“When developing the electrodes, our aim was to find a material that is absolutely rigid in order to avoid the possible occurrence of distortion peaks at frequencies in the range of three to four kilohertz,” explains Axel Grell. Against this background, the engineers finally decided to use ceramic – a material whose internal damping and granular structure make it much more resistant to resonances than, for example, glass. However, producing such ceramic electrodes is a complex task: ceramics can neither be etched nor suitably drilled. For that reason, Sennheiser crafts the electrodes using a sophisticated spraying and grinding process. Subsequently, a layer of gold is vapor-deposited to guarantee optimum electrical conductivity. 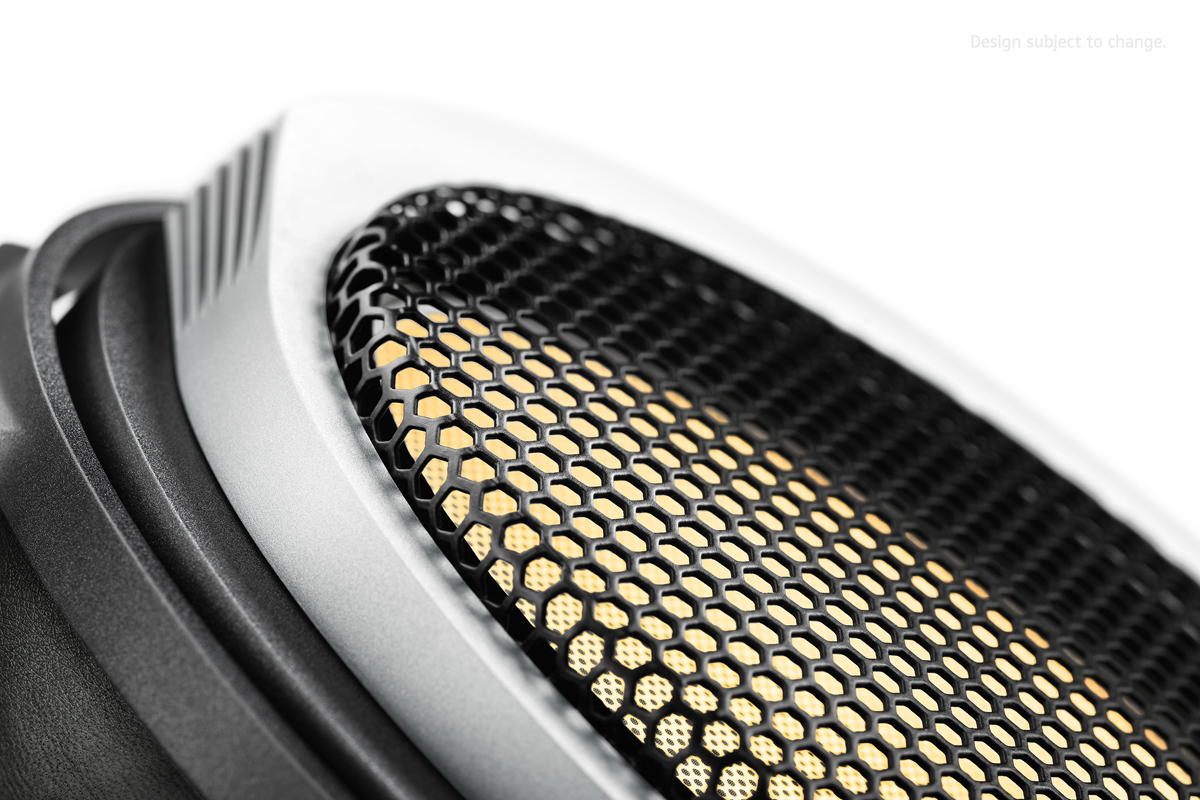 Material selection and processing are also decisive when it comes to the coating for the diaphragm. After intensive tests, the choice was made in favor of a vapor-deposited coating of platinum. The thickness of the entire diaphragm is precisely 2.4 micrometers. With regard to the ratio of the diaphragm thickness to the coupled air mass, 2.4 micrometers was found to be the optimum for allowing controlled vibration of the diaphragm – the result of extensive testing by the team of developers. “In this case, it's not a matter of ‘the thinner, the better’ but of finding the absolute optimum,” says Axel Grell.

Even the cables have been specially designed and built. The eight wires of the high-performance cables are made of oxygen-free copper and plated with a coating of silver, which provides optimum conductivity for perfect transmission of the audio signal. The wires are sheathed in an insulating layer that has a mixture of differently structured materials which eliminates the sound waves acting on the cable.

With its unique transducer system, the new Orpheus has a frequency response of 8 hertz to more than 100 kilohertz. This is a frequency range which far exceeds the limits of human hearing ability. Nevertheless, this extremely wide frequency response does have an effect on the sound experience, as it ensures that, in the audible range, the sound of the headphones is virtually free of distortion: 0.01% THD at 1 kHz, 100 dB SPL.

Therefore, in terms of sound purity, Sennheiser is venturing into areas that have never before been measured in a sound reproduction system. Even the slightest nuances of the music become audible. “In some music pieces that I had known for years, I suddenly became aware of details which I had never perceived before,” said Axel Grell, describing the listening experience with the new Orpheus. “I found this really moving – and every other listener will also be overwhelmed by this unique audio experience. After all, music is all about emotions.”

The new Orpheus was also designed considering all kinds of contemporary audio sources, from vinyl to high-resolution audio files. Apart from balanced inputs, the headphone system also has unbalanced input sockets; the incoming signals are balanced before being further processed. Digital audio sources are connected via S/PDIF (optical and coaxial) or USB. To convert the digital music data into analog signals, the Orpheus uses the ESS SABRE ES9018 chip – a reference in the field of digital-to-analog converters. In the Orpheus, its eight internal DACs convert audio data with a resolution of 32 bits and a sampling rate of up to 384 kHz or DSD signals with 2.8 MHz and 5.6 MHz into balanced analog signals. For each stereo channel, four DACs are connected in parallel for noise reduction. As a result, the entire frequency spectrum of high-end audio sources is reproduced without distortion. The circuit was optimized for the fully symmetrical design of the Orpheus.
The rotary switches for the source and the volume controls are milled from a single piece of brass and chromium-plated. The positions of the four switches are controlled by a microprocessor and activated by high-quality relays. Each element can be remote-controlled and will follow any adjustments that the listener makes. For example, if the input switch is changed by remote control from USB to Balanced, the respective button will also rotate.

The combination of technology, design and the highest-quality materials is also continued in the headphones themselves. The genuine leather ear cushions are crafted in Germany and ensure the highest possible comfort even over several hours. At the inner side of the cushions, hypoallergenic, breathable microfiber fabric provides additional acoustic absorption.

“The new Orpheus surpasses every other headphone system in the world by offering the ultimate in reproduction precision, exceptional spatiality and a frequency response that extends far beyond the range of human hearing ability. It is able to deceive our senses in a completely unique way, creating the perfect illusion of being directly immersed in the sound,” states Daniel Sennheiser.
www.sennheiser-reshapingexcellence.com
www.sennheiser.com
related items