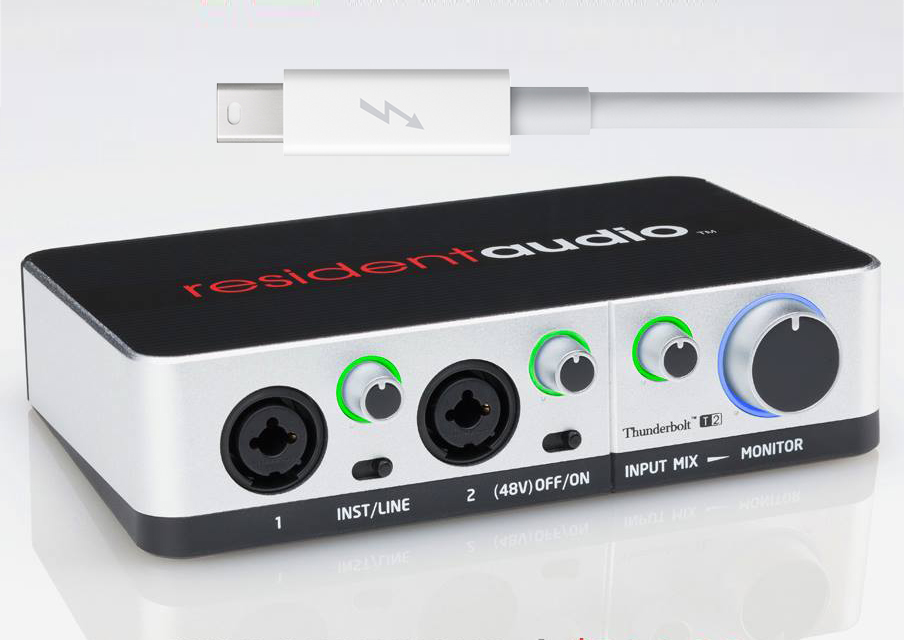 Resident Audio is a new company, based out of a newly renovated, eco-friendly facility on Long Island, New York. But the while the company itself might be new; its engineering team already has a long history in creating cutting-edge hardware and software for musicians. In fact, Resident Audio engineers have developed many well-known products in the audio industry and, as they stated, the T4 Thunderbolt interface is “just the tip of the iceberg.”

Resident Audio intends to introduce “a whole line of innovative audio tools that not only help musicians improve their craft, but make the experience of recording music simple and enjoyable for all. Our goal is to design products that not only sound amazing, but look and feel great too. We share the same passion for music as our customers.”

The new Resident Audio T2 Thunderbolt interface was designed for performers using a laptop computer onstage or for anyone doing recording at home or on the road. The T2 provides two channels of I/O with near-zero latency in a lightweight, portable package, with support for high-resolution audio, all the way up to 24-bit/96kHz.

The T2 is fully bus-powered – no AC connection or batteries required – so it can easily be integrated into any live system, or portable/home studio. It provides two combo XLR/¼” inputs with switchable phantom power for the connection of microphones, instruments and line-level devices, as well as dual balanced TRS outputs and a dedicated headphone output. The T2 can also serve as an ultra-stable MIDI interface, ensuring precise synchronization between audio and MIDI tracks. 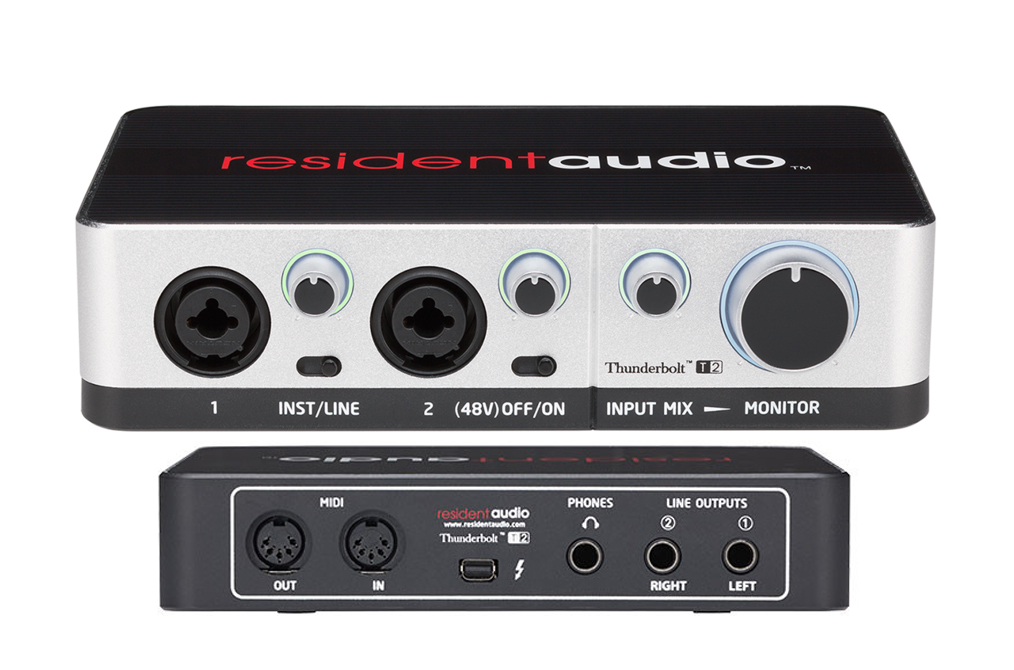 From the basic description it might sound the T2 is basically like any other audio recording interface available. But as the company reinforces, Thunderbolt technology, developed by Intel Labs in collaboration with Apple, makes a whole world of difference without increasing the price. Thunderbolt is the most advanced input/output (I/O) protocol available today. Twice as fast as USB 3.0, twenty times faster than USB 2.0 and twelve times faster than Firewire 800, it provides unparalleled audio performance with near-zero latency.

The result allows the T2 to record and playback audio with full 24-bit resolution, at sampling rates up to 96 kHz, using high-end electronic components that would be unusable with USB. Unlike USB devices, which can only carry a maximum of 2.5 watts / 5 volts of bus power, Thunderbolt allows for 10 watts / 18 volts of power to be carried over the same wire as the audio signal. This allows higher quality electronic components (such as preamps and A/D/A converters) to be incorporated, resulting in greater sonic detail and extended frequency range.

Also, the software drivers for the T2 have been programmed by some of the best engineers in the industry and have been specifically designed to ensure rock-solid performance and minimal CPU overhead, allowing the host computer to focus on things like effects processing and monitoring.

All T-Series interfaces support ASIO, CoreAudio, and Windows Audio Session API, allowing them to be used with most Macintosh and Windows computers that provide a Thunderbolt port. On their website Resident Audio provides a list of current compatible Windows computers. The speed of Thunderbolt, combined with the rock-solid T2 driver, ensures that audio and MIDI tracks always line up perfectly with no delay, as required in live performance and music applications.

The T2 chassis is made of sturdy aluminum/acrylic in a 1/3U rack mountable format designed to withstand portable and desktop use.  Tactile gain controls with three-color wraparound LEDs allow optimum levels to be set quickly and easily, while the Big Knob volume control sets the level of connected headphones as well as overall monitor level. The T2 also has a Smart Monitoring feature, which allows easily switching between stereo and mono monitoring.

The T2 knobs not only glide smoothly, but also face slightly upwards, making them easy to access in low-light onstage environments. There’s also an Input Mix control, with its own three-color wraparound LED, to blend a live input signal with the playback coming from a computer. The dual-function Instrument/Line control can switch the headphone output from stereo to mono.
www.residentaudio.com/t2-thunderbolt-interface/