Billed as the “Synthesis of Technology, Art and Music,” Moogfest is a fabulously quirky celebration of electronic music, geekiness and the legacy of synthesizer legend, Bob Moog. For the first time, two DirectOut MADI systems were used for the live recording of two of the main festival venues.
Moogfest—which combined performances from top acts like Kraftwerk, Flying Lotus, Pet Shop Boys, and M.I.A. together with instrument workshops and seminars on everything from sci-fi futurism to Sonification and Cybernetics—was held during five days in April 2014, in Asheville, NC. Asheville is the city where Moog spent the last 30 years of his life.

Moogfest documentation producer KamranV (CEO of CyKiK) and recording producer Nick Tipp (Soniferous Inc) were responsible for overseeing the multitrack recording of the entire festival. Together they created a MADI setup based on equipment from German company DirectOut Technologies as main recording systems and broadcast mix systems of the Diana Wortham Theater and The Orange Peel venue. Each system included one 32-channel ANDIAMO.MC preamp, several BREAKOUT panels, an EXBOX.UMA, one MA2CHBOX and finally a JoeCo BBR64MADI which acted as a backup recorder using the second MADI signal from the ANDIAMO.MC.

The preamps were controlled via MIDI by a recording/broadcast mix engineer who used using ProTools’s EXBOX.UMA as the audio interface. The DirectOut Ma2chbox provided an analog connection to the engineers’ monitoring equipment as well as easy monitoring of broadcast mixes being sent to the web broadcasting partners TechZulu. 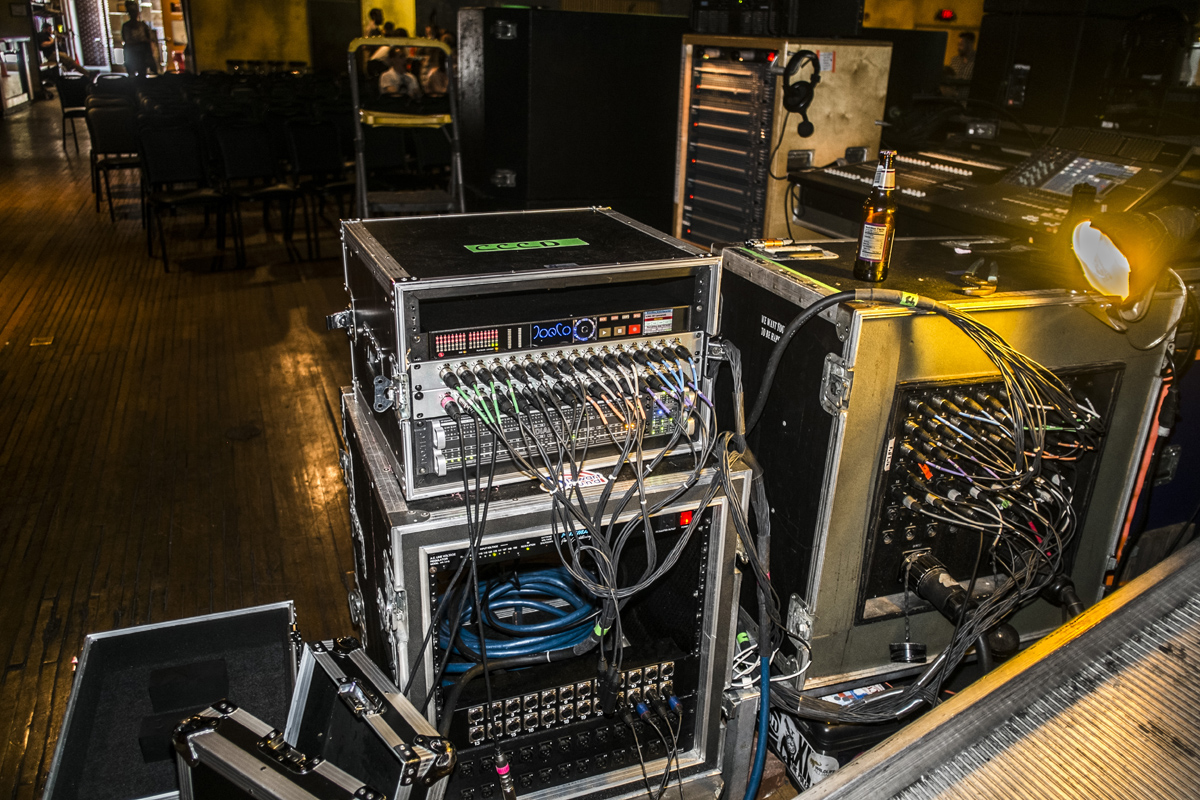 Recording producer Nick Tipp was more than satisfied with the performance and ease of use of the DirectOut gear: “The multitrack recording required a 32 I/O interface with preamps included,” he explained. “Andiamo.MC is the only device on the market that allows 32 mic preamps, outputs for our broadcast feeds, a MADI signal to get our mix engineer far enough from the PA to allow him to mix, plus an additional MADI signal for a backup recording, whilst still being such a small package – at only 2RU it enabled our onstage footprint to be incredibly small, which is critical for staying out of the way of the live sound production on a festival with many acts using each stage.”

“In addition to the ANDIAMO.MC being the only product that met our requirements, I was also delighted to discover how easy is it was to set up, especially as this was my first time using a MADI system,” continued Tipp. “All the engineer laptops were very easy to set up with the control software – my own laptop, being steam-driven, took a little longer, but once everything was in place it was quite simple to operate. The MADI signal was just there and the devices all saw the incoming MADI signal and clocked to it automatically. It was all wonderfully painless and the quality of the preamps is excellent. In fact, I was so impressed by the whole thing that I decided to purchase the same setup for my own productions.”

DirectOut GmbH was founded in 2008 by a team of professional sound engineers headed up by Stephan Flock, an award-winning classical music sound engineer with more than 20 years experience in digital audio signal processing design. The company specializes in developing essential pro audio connectivity, networking and bridging solutions for broadcast, studio, live and installed sound applications. Unique in that all members of the DirectOut development team are still active professional sound engineers, the company is fully focused on real-world demands and problem solving. The product range, marketed under the brand of DirectOut Technologies, offers solutions that build bridges between different audio worlds and make systems and formats more flexible. Audio formats supported include MADI, AES3, AES67 and RAVENNA.
www.directout.eu
related items