This year’s IBC will see UK manufacturer DiGiCo show its range of broadcast application specific consoles and demonstrate a new and innovative three-way network communication solution. Live demonstrations, will connect the DiGiCo booth to the Optocore and Clear-Com booths via an Optocore loop for audio, intercom and data connectivity with a BroaMan Route66 core router providing video.
A leading force in digital audio solutions, DiGiCo’s broadcast application specific software has seen the company make inroads into the broadcast market, with high profile events including the Sochi Olympics and The Championships, Wimbledon 2014, companies such as mobile production and satellite service company Sure Shot Transmissions in the US, Canada’s Eastlink TV and Prolink TV in the UK, and television shows such as The Voice of China and The Voice of Germany taking advantage of the plethora of features and the superior audio quality offered by its SD Series of consoles. 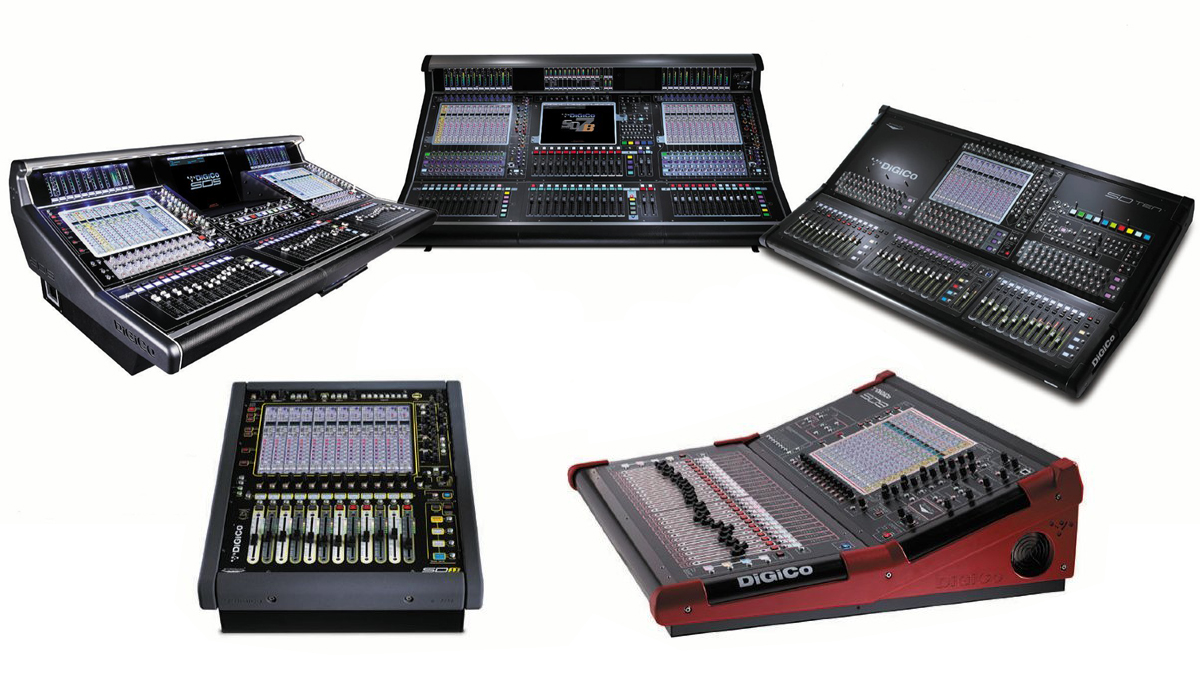 The SD Series is based on the power of FPGA technology and Stealth Digital Processing and adopts a multi application approach. It is this that has enabled DiGiCo to develop application specific feature sets, resulting in dedicated broadcast versions of its SD7, SD5, SD10, SD9 and SD11 consoles.

The SD7B, based on the flagship of DiGiCo’s console range, has the routing capacity, processing ability and user interface to form the heart of the most complex broadcast audio productions.

The SD7B’s feature set has been created to manage the extensive and challenging work of the broadcast market. In addition to the standard console’s impressive feature set, it handles up to 996 simultaneous optical plus 224 MADI, 24 analogue and AES/EBU connections. It can run two high speed Optocore loops, with any combination of 448 inputs and outputs on each loop and all at 96KHz, while the local I/O connections are ideal for fast outside broadcast setup before setting up the racks. Backstop PFL is available on every channel, while 256 dynamic EQ processors are available on any input or output on each band of EQ, as are 256 multiband compressors, also available on any input or output. 48 simultaneous internal Stealth digital effects, from a palette of 33, are also provided.

The SD10B has a broadcast specific feature set that includes such innovations as multi-channel ‘folding’ under a single fader allowing users to configure stereo, LCR, 5.1, or up to eleven mono channels under a single fader strip that can be unfolded for individual control, or neatly folded up for convenience and efficient work surface use, making it an exciting, cost-effective option for any broadcast project. Amongst its many features and benefits are 37 x 100mm touch sensitive faders, providing fast access to the console’s large number of channels, which include 96 with full processing, 12 of which can be configured as full Flexi Channels - and outputs that can be assigned across the surface. All inputs have dual mono inputs for fast ‘Main’ and ‘Alt’ channel switching.

The SD11B is designed to be equally at home as a desktop console or mounted in a 19” rack, it is set to be the most powerful broadcast console yet for its size.

All consoles are compatible with DiGiCo’s SD Rack, which serves as a multi-sample rate signal splitter that also allows the ultra smooth DiGiCo microphone preamps to replace the standard mic preamps of an analogue or other digital console. DiGiCo HD-SDI cards allow the user to de-embed and re-embed any combination of up to four of the available eight AES3-compatible streams per I/O module. Gain Tracking and splitting is also available.

First demonstrated at Prolight+Sound 2014, and following the development of new software that enables Optocore devices to be connected directly to the Optocore-DiGiCo fibre loop, DiGiCo will show how easy it is to add professional video signal layers on top of the Optocore technology and to create high-bandwidth and high-channel count systems.

Users can now simply add an Optocore 16-channel X6R-FX interface to the DiGiCo network to provide additional I/O connectivity together with Ethernet and RS485/422 and can also use Optocore cost efficient DD2FR-FX and DD4MR-FX MADI interfaces to increase the number of MADI ports available on the console. Even though Optocore partners with multiple console manufacturers, only DiGiCo has OEM Optocore and is running the native 2.21 Optocore protocol.
Live demonstrations, connecting the DiGiCo stand to the Optocore and Clear-Com stands via an Optocore loop for audio, with a BroaMan Route66 core router for the video will take place during IBC providing video, audio, intercom and data connectivity between all booths.

For video transmission they will provide a combination of the Route66 core router, from sister company BroaMan, at the Optocore stand, and BroaMan Mux22 satellites at Optocore, DiGiCo and Clear-Com.
www.digico.biz
related items