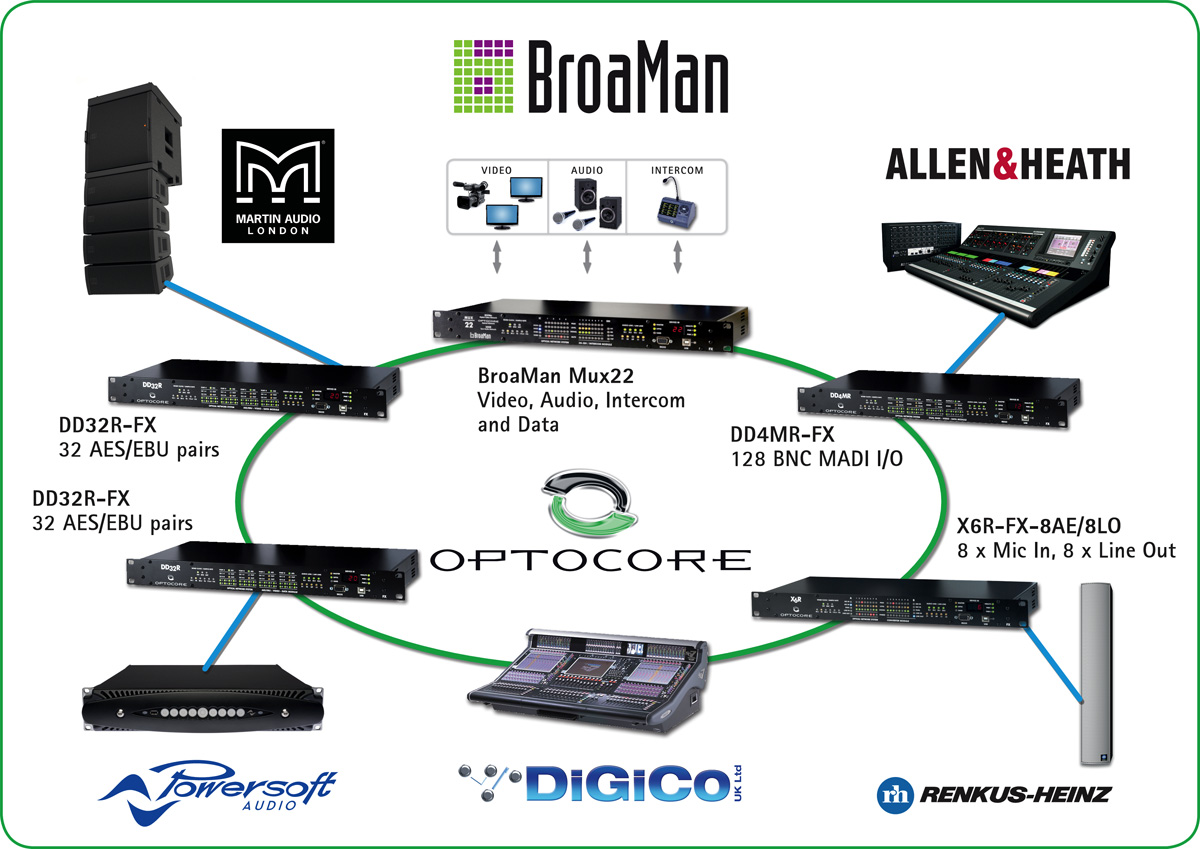 Multiple DiGiCo consoles will connect to a number of different locations, with the SD7, SD5 and SD10 together on an Optocore loop. “We will have a laptop with multitrack (simulating a live band) connected via a DiGiGrid MGB coaxial MADI interface to the SD10, which in turn will connect via Optocore to the SD5 and SD7,” explains TM Audio’s Jaap Pronk.

This ring starts at the three DiGiCo consoles and continues to the Martin Audio booth, which forms another zone within the TM Audio hub, where an Optocore DD32R-FX digital interface will connect the company’s loudspeakers via AES EBU.

An Optocore DD4MR-FX will be located on Allen & Heath’s booth to copy the multi-track via the MADI protocol, with an Optocore X6R-FX-16AE AES EBU unit on the Renkus-Heinz booth. A second DD32R-FX AES EBU unit will be placed on the Powersoft booth and finally, on the Optocore booth itself, the ring will connect to a Broaman MUX22 unit which will link to another MUX22 unit on the DiGiCo booth to close the ring.

“The multi-track on the DiGiCo booth can be mixed on the SD10, the SD5 and the SD7,” Pronk continues. “This simulates, for example, FOH, monitors and on-air broadcast, all taking place at the same time.” The mixes will be sent to Powersoft’s new X-series amplifiers, Martin Audio and Renkus-Heinz loudspeakers in different locations, while the multi-track is copied to an Allen & Heath mixing system, which can do a separate mix for another room.

DiGiCo is the only console manufacturer to benefit from OEM Optocore and is running the native 2.21 Optocore protocol. Users can see each Optocore interface as a part of the DiGiCo/Optocore network, showing how their X6R mic preamp can be controlled directly from the console and how console can be easily extended with multiple remote AES/EBU and MADI I/Os. Using the fibre connection between the DiGiCo booths, all visitors will be able to see the real remote preamp application.

“Together with Optocore, DiGiCo provides a connected system that can now be found in many installations such as multi room theatres, multi room studios, Houses of Worship, sports and live venues,” says Jaap. “The key advantage is a non compromised, fully redundant and synchronous network without any added latency for every extra unit on the network. Latency and clock problems belong in the past with a network like this.

“The system is really easy to use and having this extensive network on show at ISE will enable our customers to experience just how simple it is first hand.”
www.optocore.com | www.broadcastmanufactur.com
related items