Italian company IK Multimedia not only designs some of the imaginative and affordable hardware devices for studio and mobile production, but also creates surprising software applications for both Mac/PC and smartphones/tablets. T-RackS is one of the most affordable processing plug-in suites based on the company’s Sonic Character Cloning (SCC) mathematic algorithms coupled with IK’s unique Dynamic Saturation Modeling (DSM) technology, developed to accurately emulate the non-linear interactions between components in an analog circuit, including accurate emulations of tube driven devices.

All T-RackS processors are available as individual plug-ins with   with native support for 64-bit operating systems and up to 192 kHz sampling frequencies for high-quality audio processing through the entire signal path. Available plug-ins support all major formats, including VST, RTAS, AAX (32- and 64-bit), and Audio Units.

With the new T-RackS Mic Room for Mac/PC, IK Multimedia offers a powerful new microphone-modeling module, including a collection of over 20 classic and contemporary models to choose from. Each of Mic Room’s microphone models has been meticulously recreated for accuracy and detail and boasts the true frequency response, nuanced character and specific sound of its physical counterpart. There are harmonically complex tube condensers, aggressive dynamics and velvety smooth ribbon mics plus an assortment of creative and unusual options chosen to inspire new ideas in the studio.

The way Mic Room works is simple. It effortlessly changes the sonic profile of recorded audio to match the signature of the chosen microphone. Since it’s a T-RackS module, it’s easy to place onto an individual track - it can be used either inside T-RackS or as a standalone plug-in. T-RackS Mic Room was designed to be placed on individual tracks in a larger mix that contains recorded audio from a microphone source, like vocals, acoustic guitars, miked electric guitar amps, drum tracks and more. 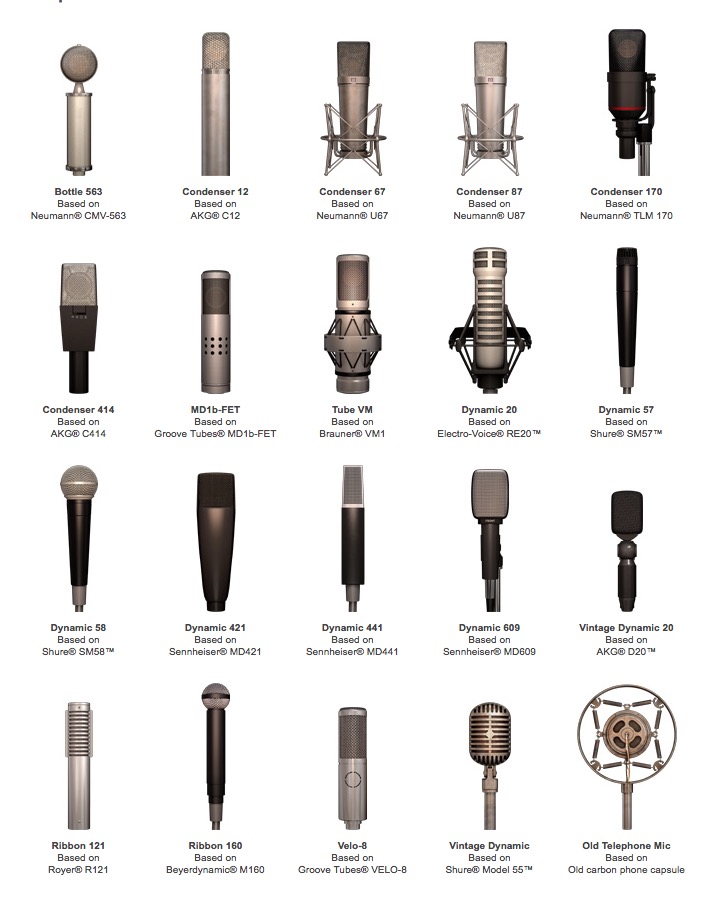 Once placed on the track, T-RackS Mic Room lets users choose the “source” microphone that was actually used to capture the original audio from a list of all the available models in the module. They can then choose a new microphone to re-mike the character of their original recording to match the specific nuance, color and tonal character of the mic they’d like for their mix. Each microphone model can be tweaked to deliver the best sound possible thanks to an intuitive graphic interface that provides an easy-to-read level meter and a touch-and-drag gain knob.

T-RackS Mic Room also comes equipped with some extra tone control features that allow an even greater amount of sonic customization. The proximity control lets users emulate the proximity effect that naturally occurs when a source is near a microphone. By dialing this control, users can make it sound like they’re right next to the mic for a rich and bassy sound. Or, alternatively, they can digitally scoop out the low frequencies for a completely different sound. On the other hand, the harmonic content adjustment effect provides control over the rich harmonic complexity of a tube condenser. It adds a kind of saturation, texture and warmth that works especially well for adding some zing to lackluster vocal tracks.

Mic Room is both useful as a creative tool to give character to recordings made with cheap microphones - sometimes the only one available at the moment of recording… - and as an educational tool for those home-studio users who don’t have the chance to experiment a full collection of classic microphones in a commercial recording studio. The solution is also a great solution to complement IK Multimedia own collection of affordable microphones and interfaces, like the iRig Mic Studio, iRig Pro DUO, iRig PRO, iRig Mic HD and iRig Mic.

Mic Room is available in the T-RackS Custom Shop. The T-RackS Custom Shop for Mac/PC is a free DAW plug-in and standalone app that gives users 24/7 access to browse, audition and purchase the different plug-ins. Each model can be tested as a fully functional demo for a period of 14 days.