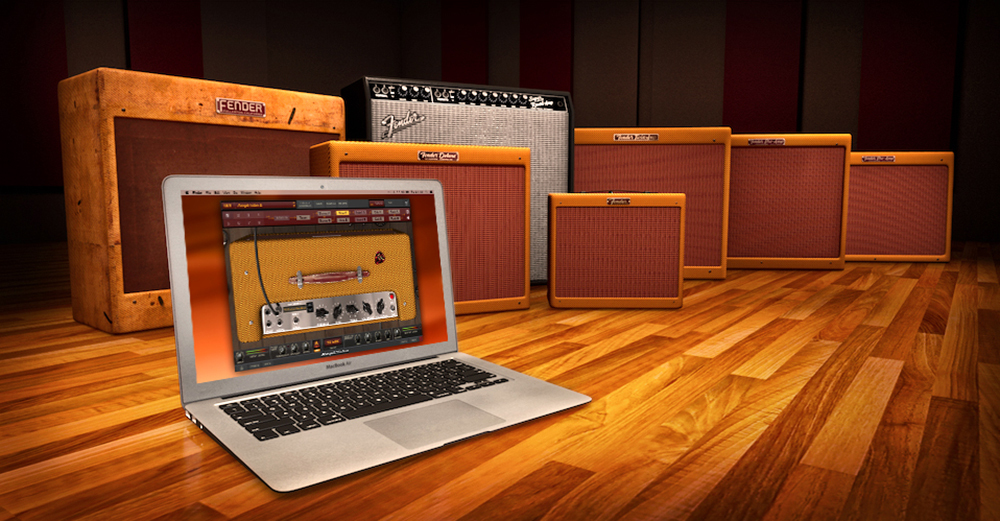 Fender Collection 2 is available as an add-on collection inside AmpliTube 3 and AmpliTube 4 from the Custom Shop feature and takes full advantage of all of the advanced tone-crafting features introduced in AmpliTube 4 like the post amp “effects loop”, 3D mic placement, room selection and room mic adjustment, the cabinet room mixer and more.

Now guitarists, producers and engineers wanting that classic Fender tone and power “in the box” can easily inject that unmistakable vintage vibe of classic Tweeds and more into their recordings with the ease and convenience of the world’s most popular guitar and bass tone studio. And, like all AmpliTube virtual gear, Fender Collection 2 models have been meticulously crafted to sound, look and perform just like their hardware counterparts; each model being scrutinized, worked and tweaked, then sound-certified and approved by the tone gurus and R&D Team at Fender.

What allows the Fender Collection 2 for AmpliTube to provide spot-on tone is the evolution of IK’s industry-leading modeling technology. Fender Collection 2 utilizes a completely new technology, Dynamic Interaction Modeling, to recreate not only every individual physical component in the amplifier’s design from the preamp input to the speaker cone and beyond, but also recreates the nonlinear behavior between each component and its effect on other components in the amp, providing a new level of realism, touch and feel never before realized in any other analog modeled product.

Fender Collection 2 for AmpliTube recreates the historic and diverse Fender legacy in virtual form. IK software engineers worked painstakingly with the Fender engineering team to ensure that each amplifier and cabinet has been rendered with the same degree of integrity and attention-to-detail that goes into the company’s physical products — all controls and operation have been replicated to provide exacting performance and function. The amplifiers and cabinets available in Fender Collection 2 for AmpliTube include:

’57 Custom Pro-Amp
The ’57 Custom Pro is based on the original Pro of the 50s, known for its rich harmonic content and it possesses a legendary flexible and vintage sound. The creamy overdrive and smooth presence are perfect for all vintage tones, and incredible for modern sounds.

’57 Custom Deluxe
One of the most loved Fender tweeds of all time, this amp has it all – virtually everything from sparkling cleans to major crunch and everything in between. The hand-wired all-tube 5E3 circuit is pure magic at all volume levels.

’57 Custom Champ
Probably THE most recorded amp of the time, the Fender Champ provides an amazingly diverse tone palette for a small, one-knob amp. The ’57 Custom Champ is the perfect companion for those who love dynamic overdriven tones and crisp, classic cleans.

’57 Bandmaster
Vintage blues tone with a 3x10 set up and hand-wired all tube construction. Designed as a “plug straight in and turn it up” amp, the sound is flexible and fills the room with its vibe, giving the impression of a 3D surround sound.

’53 Bassman
This model is based on an original Fender Bassman 26-watt 1x15” speaker bass amp, the first Fender bass amp ever created.  It features an “aging” switch that lets you toggle between “new-old stock” or “worn” vintage for that well-aged, broken-in sound.

‘65 Super Reverb
The ’65 Super Reverb is another classic collectible workhorse amp that has a special place in tone history and in the hearts of players everywhere. With shimmering tone and vintage overdrive, this legendary blackface amp is a medium output stage-filling sound machine.

Built for AmpliTube
Fender Collection 2 works inside of AmpliTube for Mac and PC giving players the ultimate guitar and bass tone studio for their recordings.  While Fender Collection 2 sounds amazing in AmpliTube 3, it is also designed to take advantage of all the additional new and improved tone-tweaking features inside of AmpliTube 4 — features like the effects slot between the amp and speaker cabinet and the hyper realistic speaker “Cab Room”.

In the “Cab Room”, players have access to a complete locker of highly sought-after microphone models to mic up Fender Collection 2 cabs with two individual mics that can be placed in 3D in front of the cabinet. Plus, users can select and position 2 room mics, change the room type/style, swap out individual speakers in the cabs (12” models), and use the new mixer to blend the cab mics, room mics, DI signal and overall cab room master volume.

AmpliTube 4 works as a plug-in inside of all popular DAWs, or as a standalone application that also features an integrated 8-track recorder and 4-track looper for developing ideas quickly and intuitively. With IK Multimedia's range of interfaces for Mac, PC and mobile devices, getting tone from AmpliTube is as simple as plugging into an amplifier. iRig Pro Duo, iRig PRO, iRig HD 2 and iRig 2 and are IK’s latest generation of interfaces that allow players to plug in and get pristine, pure sound quality from their Mac or PC (or iPhone or iPad).