During the 2015 Prolight+Sound show in Frankfurt, DiGiCo revealed its new S21 compact digital mixer. The official presentation at the show was not complemented with the usual press release and full specifications were not disclosed. Only now, after the show closed, the company revealed more details. 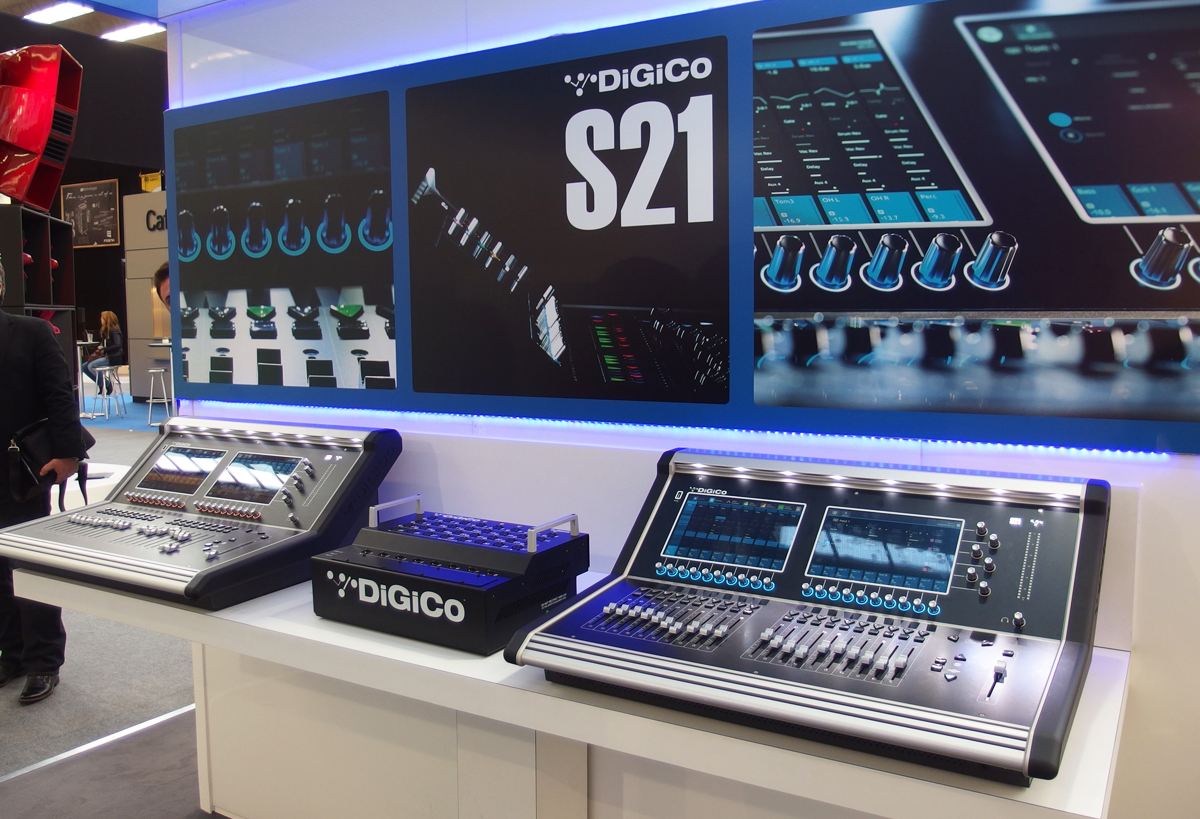 During the 2015 Prolight+Sound show in Frankfurt, DiGiCo revealed its new S21 compact digital mixer. The official presentation at the show was not complemented with the usual press release and full specifications were not disclosed. Only now, after the show closed, the company revealed more details.

DiGiCo has already made a tradition of using creative marketing for the launching of new products, either using smart teasing campaigns prior to shows, or disclosing major products, without prior warning, at the end of press events. This time, DiGiCo’s managing director, James Gordon, decided to focus attention on its distributor network, revealing its new compact live sound console exclusively to agents and distributors, prior to the Prolight+Sound and NAB 2015 shows. 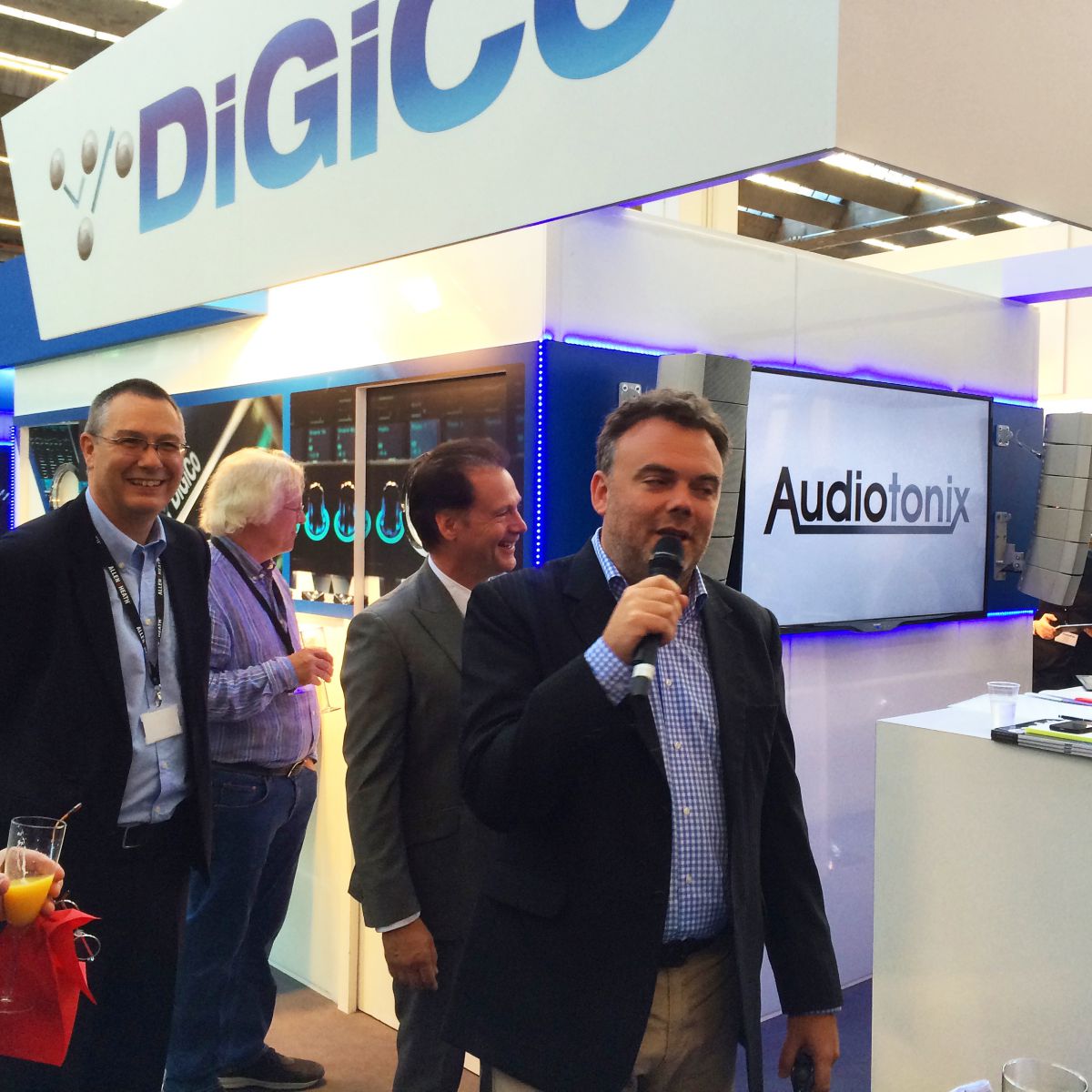 In fact, the company’s press event at Prolight+Sound started with a corporate announcement, confirming that the new group of British audio companies, bringing together DiGiCo, Allen & Heath and Calrec, with direct investments from Electra Partners and ISIS, two of London’s top Private Equity houses, was officially named Audiotonix (see picture).

Visitors and press alike where therefore surprised to find a second DiGiCo booth exclusively filed with the new S21 consoles available to try out, without much information available. As James Gordon explained, “with the S21, we wanted to re-write the rulebook. To test the conclusions we previewed at Prolight+Sound without publishing or unlocking the full software potential, or even the intended release specifications,” says James Gordon.

“This different approach makes perfect sense when you take on-board that the core of S21 is DiGiCo’s Stealth Digital Processing. This FPGA based technology is the key that unlocks the flexibility that the R&D designers need to specify and deliver the ultimate console. This has been demonstrated to existing clients, as every console in the SD range has benefited from complimentary advancements in core processing and software since their launch.”

During the press event, adjacent to Yamaha’s booth and immediately following the presentation of the newest digital live sound mixers from the Japanese company - see here - DiGiCo basically showed an amusing video of the distributors “extravaganza” event, where DiGiCo’s Technical Director, John Stadius, made an appearance dressed as “Doc” Brown from the “Back to the Future” movie trilogy, driving to the stage on DeLorean sports car to reveal the new S21. 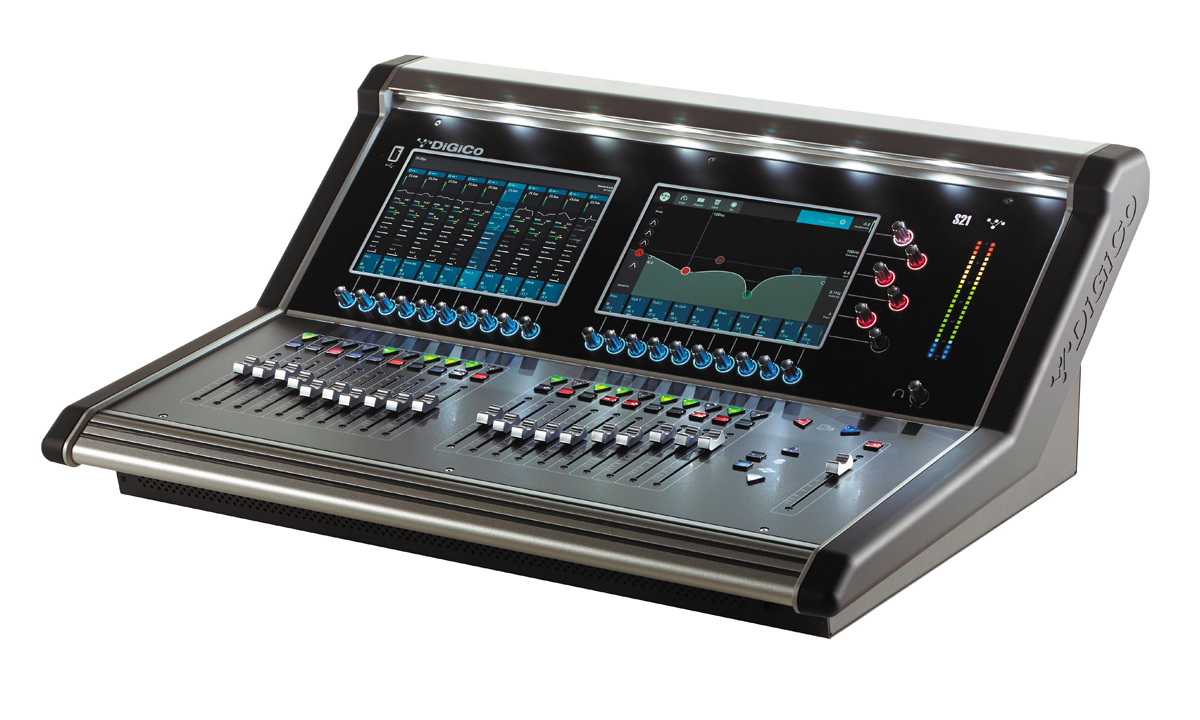 “We wanted to design an entry level console that retained all the features and values DiGiCo is known for in terms of quality, ergonomics and style, and one we could be truly proud of at a price point that allows even more audio engineers to join the DiGiCo family. In fact, that was the condition John Stadius put on his design team. It is also why the console has been hidden in development for close to three years,” explains James Gordon.

“When you walk up to the console you can instantly tell it is a full member of the DiGiCo stable. The build quality and design takes on all DiGiCo’s core values such as aluminium extrusions, RGB switch encoders with HTL (Hidden Til Lit), Polycarbonate overlays and two large multi touch screens that allow the operator to get an unrivaled overview of what is at their finger tips.”

“The challenge we faced in R&D was providing a true pro ‘high-end’ console at the desired price point,” John Stadius adds. “The brief we got was very strict, we had to develop a console that gave the operator all the sensations they would get when stood behind the SD7.

“This requirement really motivated the team and S21 is the result. The worksurface design speaks for itself, but in terms of audio, you have the same FPGA algorithms as the SD7 and the Mic Pre design is lifted from the 192kHz SD-Rack. The audio statistics on this console are very much high end; it should surprise a lot of new to DiGiCo engineers. Oh, and its 96kHz with no processing limitations from day one like all the other DiGiCo consoles. As I said, no compromises were allowed!”