Facts and Projections on Music Services, Hardware and Content

Futuresource Director, Sarah Carroll, opened the conference telling the assembled audience that audio hardware is one of the bright spots of the CE industry, with 76% global growth in shipments of wireless speakers forecast for this year. Growth in soundbars, wearable fitness devices and media adaptors are also in the frame, at 49%, 45% and 39% shipment growth respectively.

“The audio industry’s renaissance has arrived,” said Sarah. “There is a groundswell of innovation in the device space and stabilization across the breadth of the music industry.” 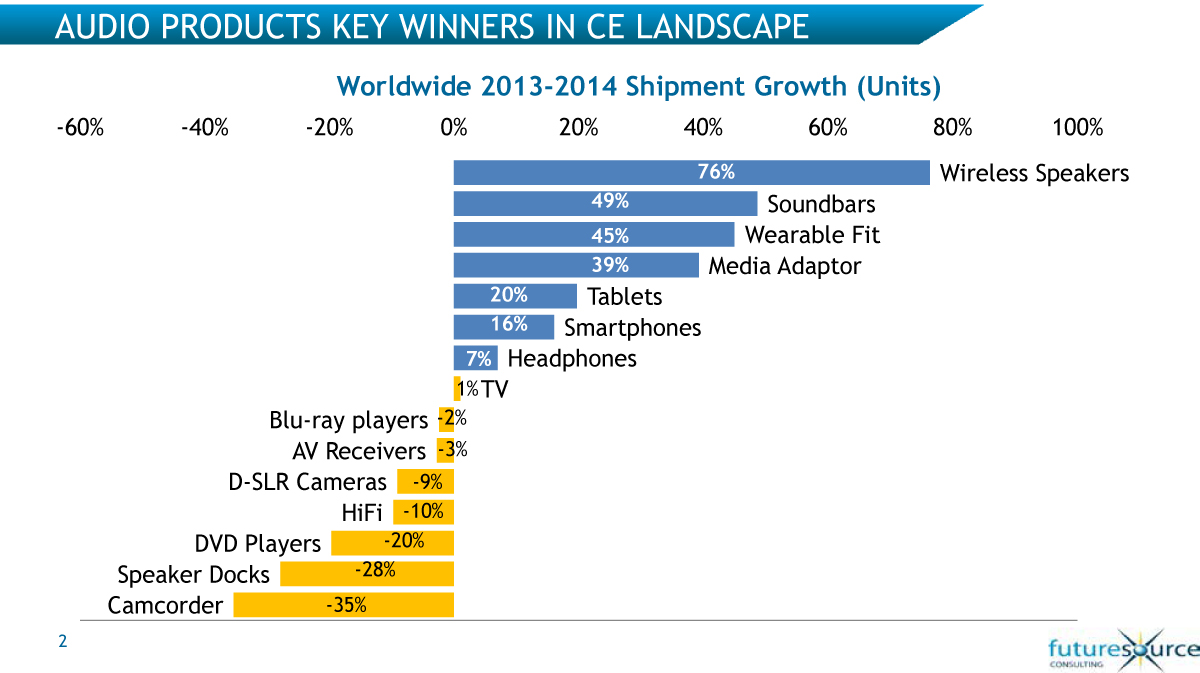 Sarah also highlighted that the path to digital music varies considerably across the globe, with Swedish consumers leading the way, allocating 87% of their total music spend to digital purchases, followed by the USA and UK, at 67% and 55% respectively. At the other end of the spectrum, France Germany and Japan each allocate less than 30%

Music Subscription Services On The Rise
David Sidebottom, Senior Market Analyst at Futuresource, set the content scene by announcing that music subscription services in Europe will account for 20% of consumer spend on music by the end of this year, rising to 57% in 2018. Conversely, he warned that packaged music would begin to fade out, on track to account for 59% of spend at the end of this year and declining to 28% in 2018. 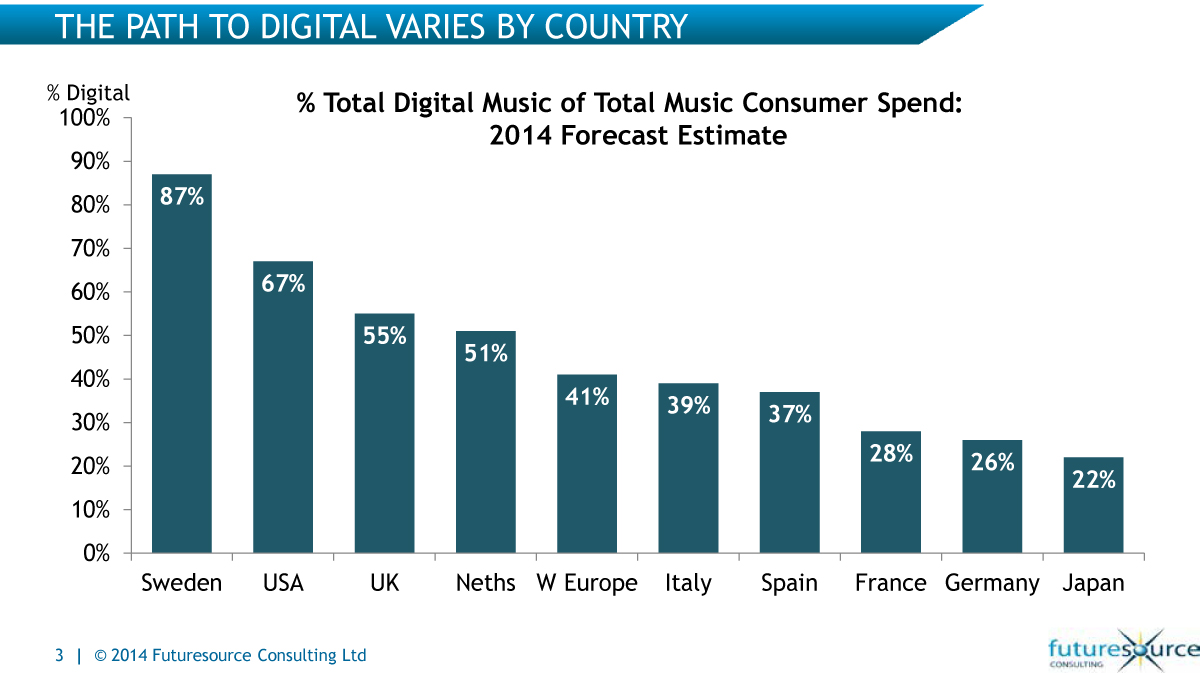 In a world exclusive, Sidebottom announced results from wave nine of the Futuresource Living With Digital consumer survey. Carried out in the UK, USA, Germany and France with more than 4,000 recipients, the survey showed that 36% in the UK bought a CD in the last six months and 18% listened to a paid music service. Looking to the USA, 27% downloaded a music track or album in the last six months and 47% listened to internet radio. When asked whether they buy music in any form, 51% of people in the UK and 62% of people in the USA confirmed that they did, demonstrating the purchasing pull that the music industry continues to exert upon its audiences. 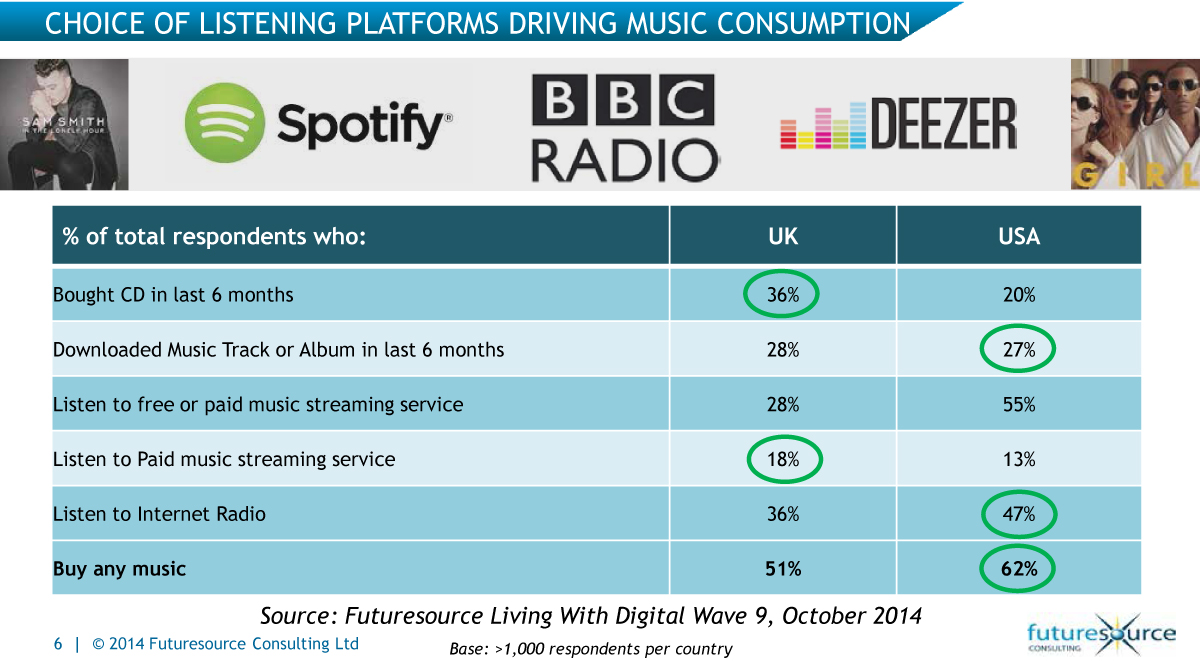 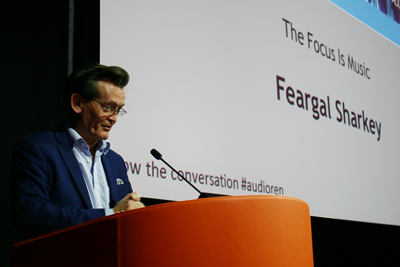 A Warning From Feargal Sharkey
In his opening keynote, Feargal Sharkey - musician, music industry executive and supporter - explored how the decade of digital has brought about many changes -in consumption, in tastes and in attitudes towards music. He looked at how far the industry has come in these years and how record labels are embracing new opportunities in this era of digital. However, he also delivered a warning to the conference delegates, telling them that online music services could be squeezing the life out of musicians, providing them with a paltry slice of the revenue that comes into the industry. Sharkey warned that revenues coming into the industry needed to be more fairly apportioned, and he re-emphasized that without the musicians there would be no industry.

Does High Quality Audio Have A Future?
The first panel of the afternoon - ‘Quality Vs Convenience and Lifestyle’ - was chaired by Simon Bryant, Associate Director at Futuresource, and explored the wants of different customer segments, whether packaged audio has a future and if new propositions like high resolution audio hit the mark and find a niche, as well as the role of smartphones and tablets in the new audio environment. 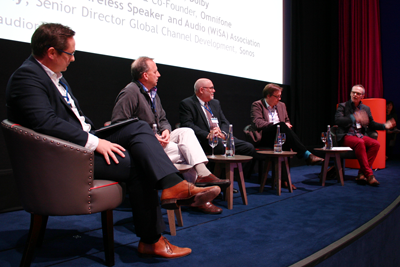 The panel consisted of Jonathan Jowitt of Dolby, Thomas Lee of the Wireless Speaker and Audio (WiSA) Association, Phil Sant of Omnifone and Pat Murray of Sonos.

The panelists agree there was consumer appetite for better quality audio and that people will pay more for it. Although it’s not for everyone - with students being given as an example - the panel agreed that the appeal of high quality extends beyond audiophiles.

Defining ‘better quality’ remains a difficult task, with the panel agreeing that ‘Higher Resolution’ needs to be standardized; questions were raised about the validity of the standard recently announced by the CEA, DEG and others, which won’t include many important labels. In terms of naming, panelists generally preferred the term ‘High Definition’, due primarily to it being a term understood by consumers, through video.

Panelists argued that the industry should strive for lossless formats, certainly not settling for a second-best solution, though the biggest challenges will be storage and bandwidth.

On the subject of multi-room audio, home size is not a factor driving consumer demand. It is linked to other aspects such as music and media consumption, a penchant for entertainment content and disposable income. Touching on smart home control, the panel felt this is not for audio purists, but that it is more of a distraction.

Home Audio: The Future is Wireless
“Home audio hardware demand is on the rise, and our forecasts show a 12% uptick in both units and volume this year,” said Wetherill. “Legacy products such as CD-based Hi-Fi systems and dedicated speaker docks are in decline, but are more than outweighed by demand for wireless speakers and soundbars - two of the fastest growing products in the entire CE market. 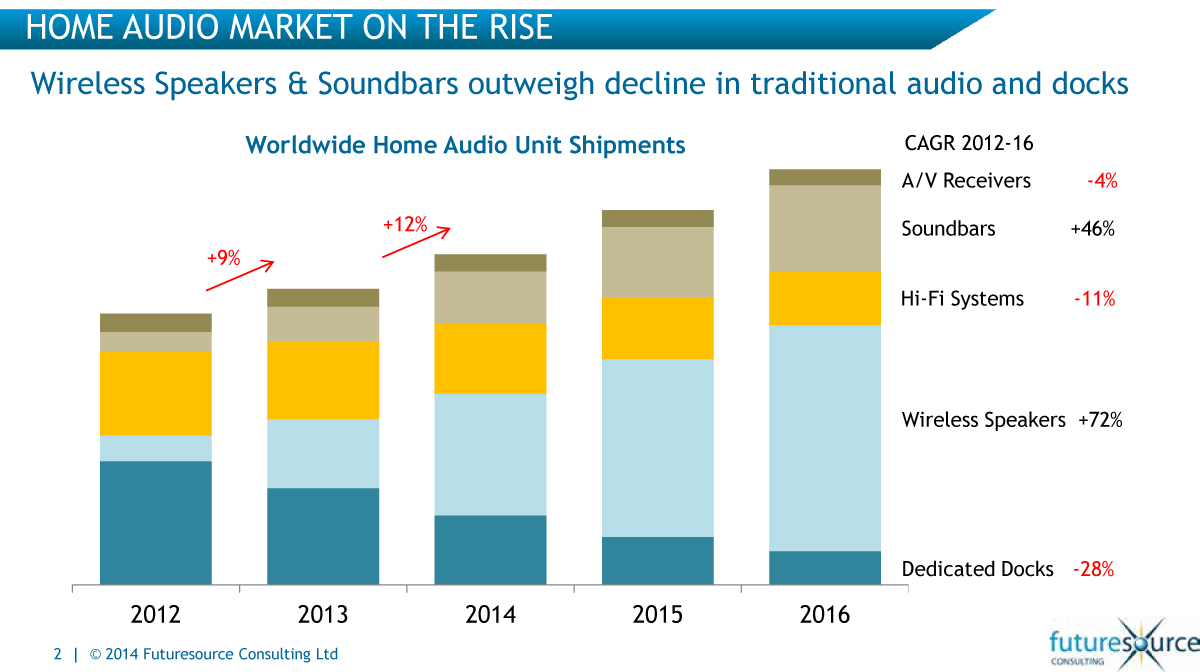 “Demand for audio products with wireless features is up 62% in 2014. This is driven by an increasing user base of smartphones and tablets, plus the growing popularity of streamed audio services. According to our latest round of Living With Digital consumer research, 54% of smartphone owners use their device to listen to music.” 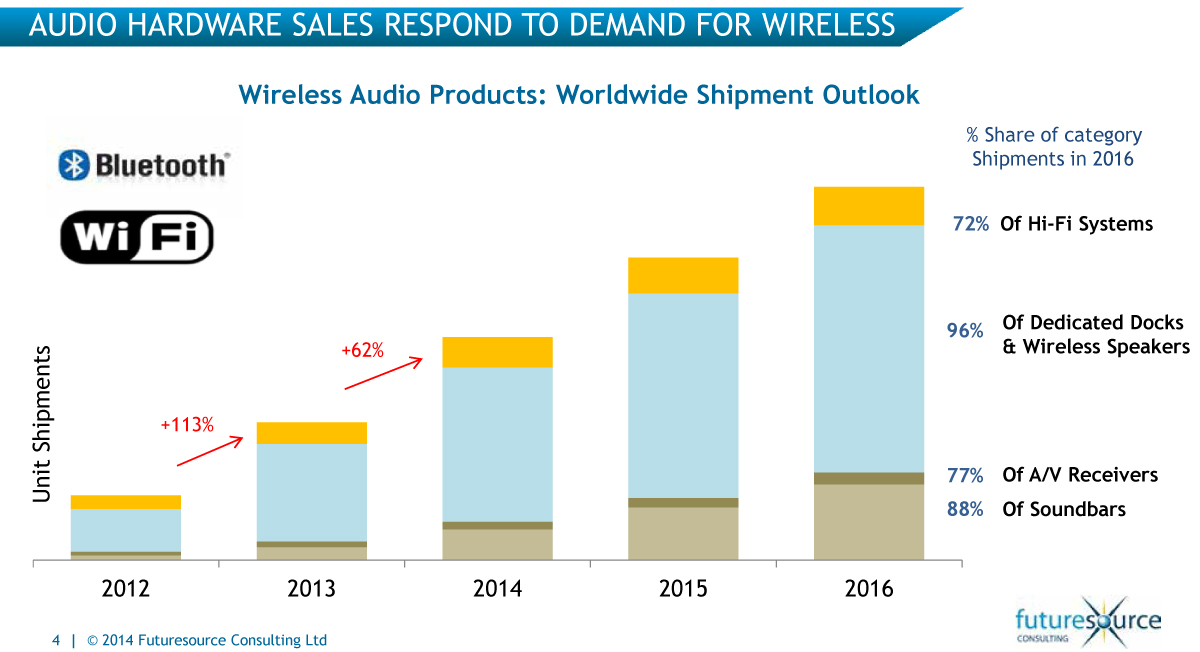 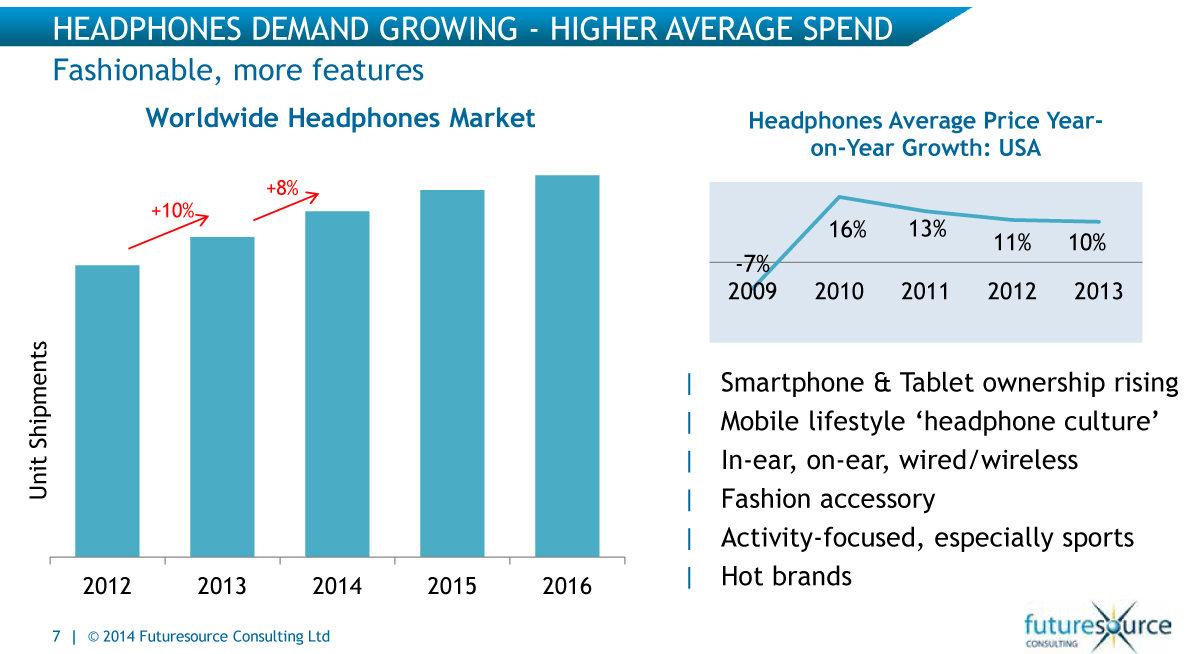 From Ownership To Access
In the final panel session of the day, David Sidebottom of Futuresource chaired a debate on streaming services and how they can be monetized and differentiated. The panel consisted of Pete Downton of 7 Digital, Sophie Goossens of August & Debouzy, Daniel Green of Tidal and Frank Taubert of 24-7 Entertainment (a Media Saturn company). 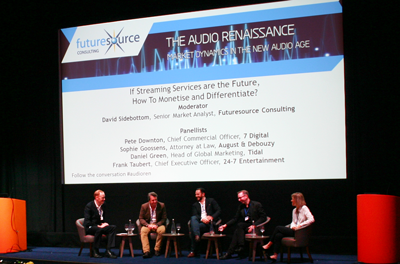 “It’s a brave new world for music, revived by fresh hardware and innovative services,” said Sidebottom. “Service providers are testing new business models and services, enabled by broadband access, and subscription services will eventually win out, accounting for close to 60% of music consumer spend by 2018.”

With all-you-can-eat being the name of the game, the panel agreed that upsell packages are crucial to longevity, and high resolution audio subscriptions are a potential gateway to this. The panel also highlighted the importance of maintaining the value of music, and remarked that quality is a key element of this. With the shifting dynamics in the music industry (to reach the number one slot, artists now only need to sell tens of thousands of units, compared with hundreds of thousands previously) the ubiquity of connected devices, combined with new methods of content distribution and consumption, is driving the public’s desire for access to music content anywhere and at any time. Ownership is becoming less valued in many consumer segments and the focus is shifting to accessibility.

Showcasing Innovation
The day was wrapped up with an innovations showcase from Jabra and Disciple Media, demonstrating the best of hardware and content creativity.

Benji Vaughan and Leanne Sharman of Disciple Media demoed their software platform that allows artists to create deeper relationships with fans. The technology enables artists to easily publish exclusive content through artist-branded apps to the mobile devices of subscribers. By converting fans into subscribers, Disciple allows artists to turn content delivery and social interaction into revenue, creating two-way channels between artist and fans on all iOS and Android devices.

Of particular note was the broadcast function, which allows an artist to live stream video from their phone to subscribers at any time, allowing fans to watch behind the scenes of a gig, a chat with the artist or watch a studio session.

Charlie Henderson, vice president of the headphones company Jabra concluded the event with a demonstration of Jabra Sport Plus Wireless earbuds. Described as an all-in-one training solution with a precision biometric in-ear heart rate monitor, the earbuds wirelessly connect to Jabra’s Sport Life app to play music and manage fitness activity to ensure the wearer is always training in the correct heart rate zone.
www.futuresource-consulting.com

All pictures and graphics courtesy of Futuresource Consulting
related items