With the transition to immersive audio formats which are object-based, Dolby is promoting its new AC-4 audio coding system to bridge both conventional channel-based audio and new immersive formats on next-generation broadcast and streaming services. The solution is available now for product development and is targeted for consumer availability starting in 2017.
The market is going to face more choices in terms of audio formats in the transition to next-generation broadcast and streaming services. With the evolution to new immersive audio formats, which are object-based, there is also a need to support the distribution of both legacy audio formats, from mono and stereo to conventional multichannel surround and multiple codecs. At the same time, there is a need to evolve toward production infrastructures that support the personalization options opened by object-based audio formats, while also maintaining compatibility with previous investments in multichannel audio distribution, including Dolby E. 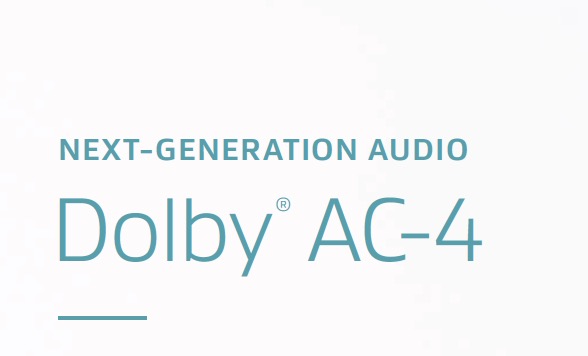 Understanding the needs of the market from content production to distribution, Dolby Laboratories developed the new Dolby AC-4 audio delivery system in order to combine the possibilities of modern high-efficiency audio coding, a flexible transport syntax, and powerful system-level features that optimize delivery and playback on a broad range of devices.

In fact, Dolby describes AC-4 as a “new audio standard” and an “elegant architecture”, designed on the brand’s experience with Dolby Atmos, the world’s first commercial object-based audio system.          The AC-4 bitstream can carry channel-based audio, audio objects, or a combination of the two. The Dolby AC-4 decoder combines these audio elements as required to output the most appropriate signals for the consumer — for example, stereo pulse-code modulation (PCM) for speakers or headphones or stereo/5.1 PCM over HDMI.

When the decoder is feeding a device with an advanced Dolby renderer — for example, a set-top box feeding a Dolby Atmos A/V receiver (AVR) in a home theater — the decoded audio objects can be sent to the AVR to perform sophisticated rendering optimized for the listening configuration.

The architecture of the Dolby AC-4 decoder enables powerful audio processing to be performed efficiently in the playback device, reducing the computational and power requirements compared with separate, independent processing stages. This is especially important on portable devices with limited processing and/or battery capability. This is achieved by implementing many of the core coding tools in the quadrature mirror filter bank (QMF) domain, enabling powerful QMF- domain audio processing to be integrated with the decoder without the computational cost of additional transforms to and from the audio-processing filter bank.

The Dolby AC-4 decoder incorporates multiband processing in the QMF domain to tailor the dynamic range and output level to the playback device, which is guided by optional metadata embedded in the bitstream by the service provider or content creator. It also provides the capability to add audio optimization for the type of device—such as spatial enhancement and speaker optimization — directly in the QMF domain without need for additional transforms.

On the encoding side, Dolby Audio combines a set of robust technologies for content that is broadcasted, downloaded, streamed, played in cinemas, or enjoyed via disc. The core elements of Dolby AC-4 have been standardized with the European Telecommunications Standards Institute as TS 103 190 and adopted by DVB in TS 101 154, and they are ready for adoption for next-generation services and specifications.

Apart from supporting conventional multichannel and object-audio formats, the Dolby audio solution combines encoding of both descriptive audio and immersive surround sound, including audience personalization with delivery of individual audio program elements with metadata (crowd mics, alternative language track, announcer mics, music, and sound effects) all the way to the playback device, where those elements can be mixed based on the preferences of the viewer.

On the production and transmission side, Dolby AC-4 also provides state of the art audio compression efficiency; ITU-R relative and speech-gated loudness control and regulatory information for automated loudness management throughout the delivery and playback chain; multichannel and multiband dynamic range information and control, including downmix and rendering loudness control; and enhanced metadata with program identification/synchronization, and interactive control. Another very important aspect for production is the fact that Dolby AC-4 makes encoded audio frames the same length as video frames to facilitate seamless content splicing. By adding a video sync input to the Dolby AC-4 encoder, the system aligns the boundaries of the audio to the video frames.

Dolby AC-4 is already proving itself in broadcast environments around the world. Broadcast and streaming codec specialist Envivio has been using Dolby AC-4 encoding in broadcasts including the 2015 UEFA Champions League final and the 2015 French Open tennis tournament. Harmonic is another broadcast and IPTV equipment manufacturer which conducted successful trials of Dolby AC-4 at a much lower bandwidth than other audio formats.