If any proof was needed, against all odds, the original stompbox effects format continues to be extremely popular amongst musicians, either keeping original analog designs alive or introducing completely new digital tools for guitar, bass or even keyboards.

DigiTech’s Envelope Filter 440 is a classic analog “auto-wah” effect that makes guitars “speak” with vowel-like sounds. The new Envelope Filter retains the unmistakable voice and touch sensitivity of the sought-after original while adding improvements like true bypass, a 9-volt power adapter jack and a choice of Up or Down effect settings. Along with its singular sound, the reissue respects the pedal’s retro-cool graphics and bright green paint job.

“An envelope filter is one of the funkiest and most expressive sounds ever created for guitar, bass or even keyboards and our Envelope Filter 440 delivers all the ‘quack’ and swept filter tones of the original and then some. There’s really nothing else like it and once you’ve tried one, it’s hard not to resist the way it makes solos and rhythm guitar parts stand out and groove,” stated Tom Cram, marketing coordinator, DigiTech. 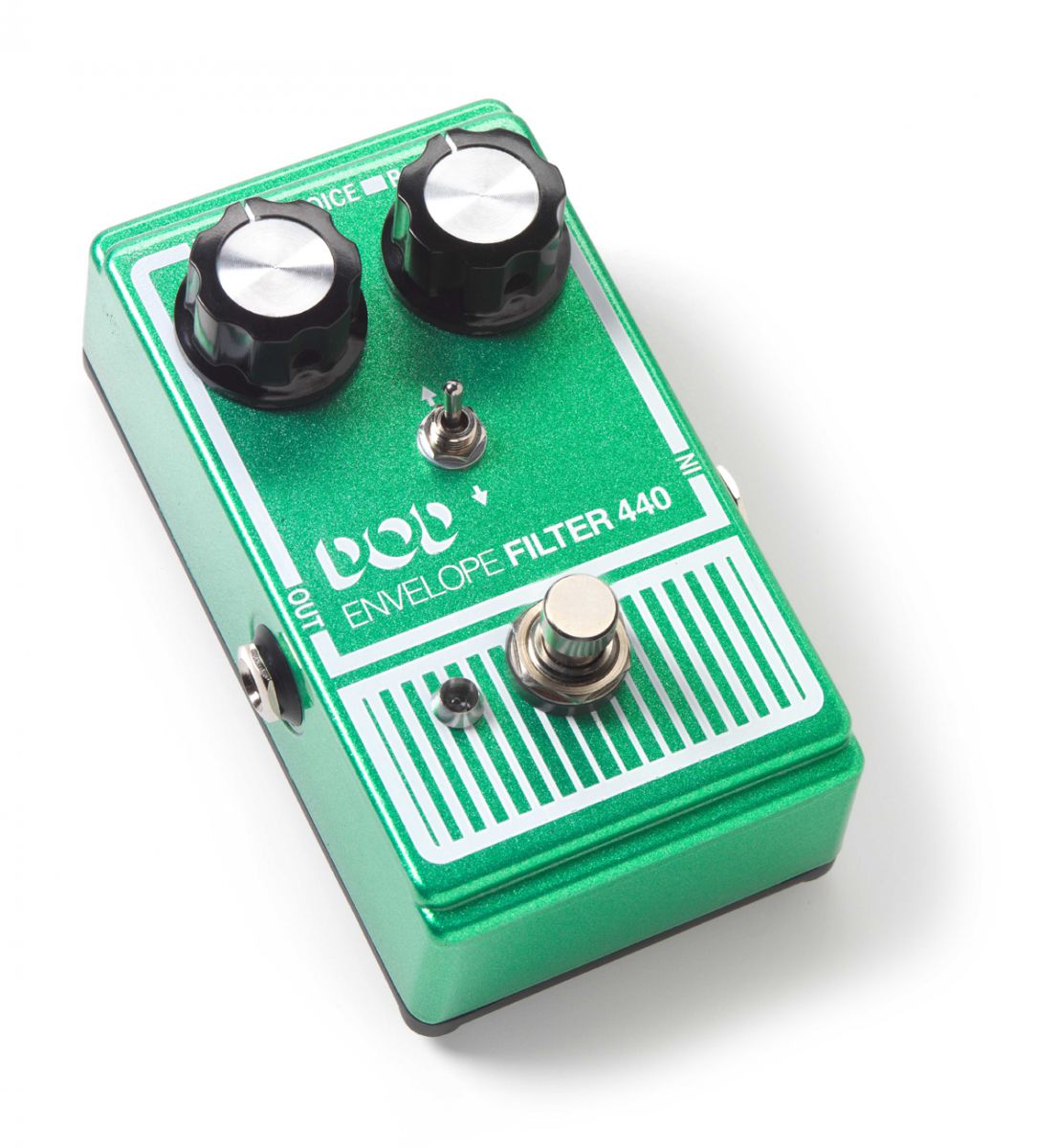 As DigiTech’s designers explain it, “the DOD Envelope Filter 440’s Up setting delivers that classic quacking envelope filter “wah” effect, while the new Down setting emphasizes the lower frequency range – great for bassists who want to rock a room with huge, thundering dub bass. The Level knob adjusts the sensitivity of the envelope to tailor the response of the pedal based on pick or finger attack. With a higher sensitivity, a player won’t have to hit the strings as hard to trigger the effect and vice versa. The Range knob controls the frequency range of the envelope’s sweep – turning it counter-clockwise sweeps more low frequencies and turning the knob clockwise sweeps more of the high frequencies. The Voice switch toggles between the Up and Down settings to choose which part of the frequency spectrum the player wants to emphasize.”

The new Envelope Filter 440 feature’s true bypass operation, which keeps the tone of the instrument pristine when the effect is not in use – unlike the original, which would color the tone even with the effect switched off. The 9-volt DC power supply input makes the Envelope Filter 440 far more pedalboard-friendly and its bright blue LED indicator is easy to see even on outdoor stages in bright sunlight.
The DOD Envelope Filter suggested retail price is $149.95.

Drop Everything!
The DigiTech Drop Pedal is a dedicated polyphonic drop tune pedal that lets guitar and bass players instantly lower their tuning from one semitone all the way down to a full octave. With the Drop, guitarists can get down-tuned chunk without having to change guitars or re-tune between songs and bassists can delve into deep bass depths even lower than a five-string low B. This new pedal features polyphonic drop tune algorithms drawn directly from Digitech’s Whammy DT pedal.

“Our new Drop pedal makes down-tuning and changing keys literally as easy as stepping on a switch,” said Tom Cram, marketing coordinator, DigiTech. “But the Drop also has cool dynamic performance capabilities by using the switch in momentary mode to add accents or trills with your feet.” 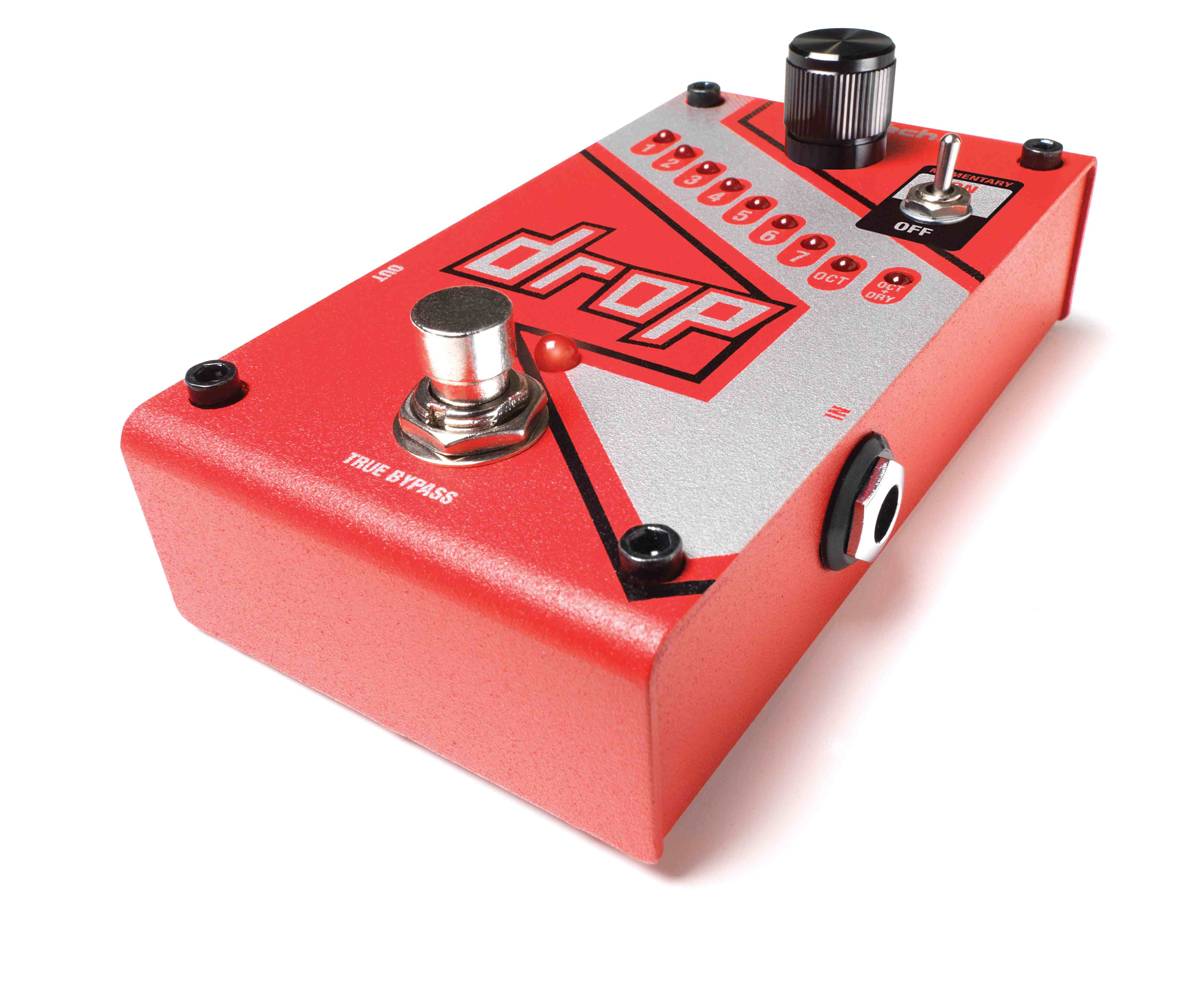 One look at its bold red, black and white graphics and its clear the DigiTech Drop shares its DNA with the iconic Whammy DT. The Drop offers a choice of eight drop tune and pitch-shifting intervals from one semitone (half-step) to a full octave down, plus an Octave + Dry mode that blends the original signal with another note an octave down. The Drop incorporates the same polyphonic pitch-shifting algorithms as the Whammy DT, to perfectly track notes and chords for precise drop-tuning performance with no glitching or lag.

The Drop features a Momentary/Latching switch to create dazzling hammer-on and pull-off type effects. Players can instantly get a drop in pitch of the notes they’re playing by stepping on and holding the footswitch – then releasing it to instantly go back up to pitch to add dramatic musical impact. This pedal also features true bypass operation and is operated via its 9-volt input and included power supply.
The DigiTech Drop suggested retail price is $249.95.
http://digitech.com | www.harman.com
related items