Eventide has released the H9 Max, the ultimate addition to the acclaimed H9 Harmonizer stompbox line. Within the same physical hardware as existing H9’s, Eventide now ships all 45 currently-available processing algorithms pre-loaded, plus any new H9 exclusive algorithms in perpetuity, at no additional charge.
Since the original launch of its powerfull H9 stomp box processor, Eventide gave musicians all over the world good reasons to be excited. Basically because it brought the famous Harmonizer effects, heard on hit records spanning over four decades, available to anyone in a stompbox format. And Eventide’s H9 is able to run all of Eventide’s effects in three available models: H9 Core, H9, and the new H9 MAX. 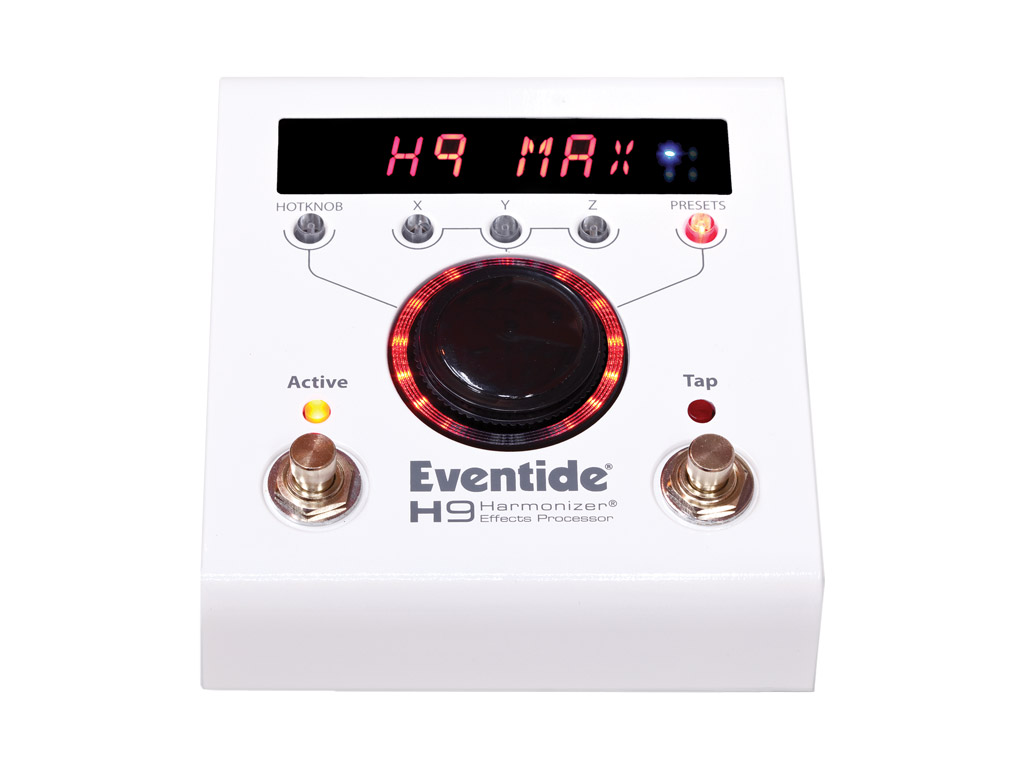 The H9 combines high-quality modulation effects with time and pitch manipulation and the superb collection of Space reverb algorithms, all in one compact stompbox. And with the availability of the H9 Core, a user could put together a multi-H9 processing chain in a remarkably cost-effective way.

While the H9 is fully controllable via its front panel, a free editor/librarian, H9 Control, can be downloaded to a Mac, PC, or iOS device. The H9 Control app can be used for live editing, creating and managing presets, and changing system settings. H9 connects via Bluetooth to iPods, iPhones and iPads for wireless live control and H9 owners can even share the algorithms with up to four additional H9s on a single Eventide.com account.

The new H9 MAX, now available, comes pre-loaded with all the effects from each of Eventide’s acclaimed TimeFactor, ModFactor, PitchFactor, and Space stompboxes, including the new Looper, plus all H9 exclusive algorithms in perpetuity at no additional cost. With a total of 45 effect algorithms and over 500 factory presets, the H9 MAX is an amazing valuable studio quality processor shrunk down to fit into a stompbox.

“The H9 MAX is the ultimate bundled H9 for those who want it all,” says Ray Maxwell, Eventide’s VP of sales and marketing. “H9 MAX is a perfect combination with a couple of H9 Cores for a killer Eventide rig that packs maximum flexibility and the huge Eventide sound in a compact, cost-effective set-up.”
An upgrade path to H9 MAX from H9 or H9 Core units will be announced in early 2015.

A leading developer and manufacturer of digital audio processing products, Eventide was founded in 1971 in New York City. Headquartered in Little Ferry, NJ, Eventide invented the H910, the first Harmonizer effects processor in 1975, followed in 1977 by the H949, the first de-glitched Harmonizer with additional delay.
eventide.com
related items