Clear-Com has confirmed it will be introducing its latest FreeSpeak II Wireless Intercom System, using an enhanced DECT-based version of its duplex digital wireless technology. The new intercom solution uses multiple license-free bands from 1.897-1.933GHz, ideal for a large number of users and multi-zone production areas in live events.
At the IBC 2014 (September 12 –16 ) in Amsterdam, Clear-Com will announce the launch of FreeSpeak II wireless intercom system, an enhanced DECT-based offering that operates in multiple license-free DECT bands from 1.897 to 1.933 GHz. The solution enables highly intelligible 7 kHz “commentator” audio bandwidth with greatly improved radio clarity, reducing the strain on the user’s ears after extended usage. 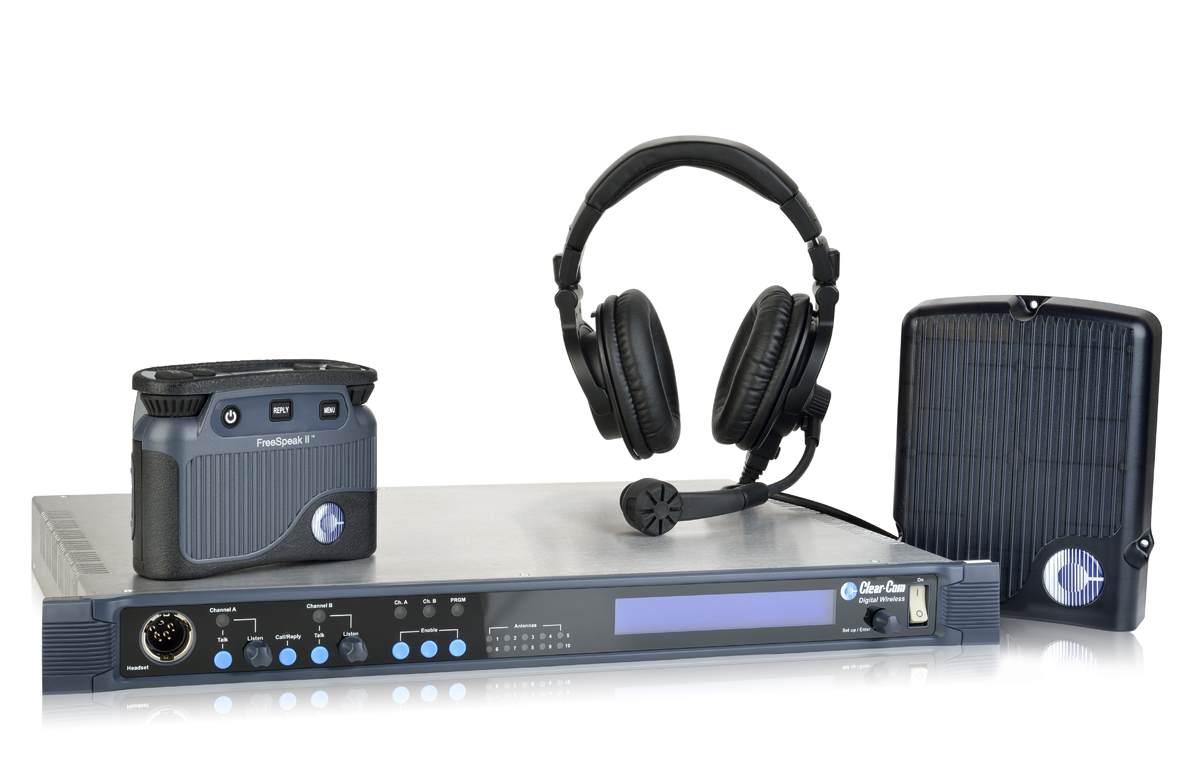 According to the company, FreeSpeak II delivers improved roaming capability for reliable wireless connections and clear intelligibility with innovative intercom features that make it a high-performance wireless option. The system features  redesigned FreeSpeak II Beltpacks and Antennas and is ideal for deployment across large-scale, multi-zone production areas, typically required in live events, broadcast and sports production.

FreeSpeak II enables several wireless beltpack users to simultaneously roam across an expansive production area without compromising on performance. Similar to its predecessor, FreeSpeak II can be implemented as a standalone base station wireless system or as an integrated wireless solution within Eclipse HX matrices, known as FreeSpeak II Integra. When using the base station, up to 20 full-duplex wireless beltpacks can be connected; in an integrated matrix setup, as many as 50 full-duplex wireless beltpacks can be used at the same time by strategically placing 10 or more distributed remote antennas to create an expansive coverage zone. These beltpack users are then able to directly communicate with any other remote or local matrix panel or other wireless or wired beltpack user who is on the Eclipse HX Matrix System network.

FreeSpeak II leverages the existing base station from its predecessor that has been updated to work with the new beltpacks and new active antennas. All-new five-channel, full-duplex FS II-BP wireless beltpack was uniquely designed for the rigorous demands of large-scale operations and continuous communication use. Ergonomically positioned controls, intuitive operation and rugged housing make the beltpack ideal for extended use under harsh conditions. Beltpacks are IP-65 rated for water and dust resistance for mobile productions. The Li-Ion battery for the beltpack can last more than 18 hours on a full charge. Beltpack operations including battery health, RF status and Antenna link can be monitored in real-time via the base station or Eclipse HX version 7.6 software.

The newly-designed Active Antenna provides the cellular roaming capability that keeps wireless users connected to the base station or to the Integra Solution. Enhancements to the antenna systems now offer a much improved wireless performance and thereby delivering a reliable wireless connection for mobile intercom users. Locally-powered Antennas can be positioned up to 3,200’ away, or 800’ away when centrally powered from the base station. Five way Antenna Splitters extend the base station to create an expansive coverage area with up to 10 antennas.
www.clearcom.com
related items