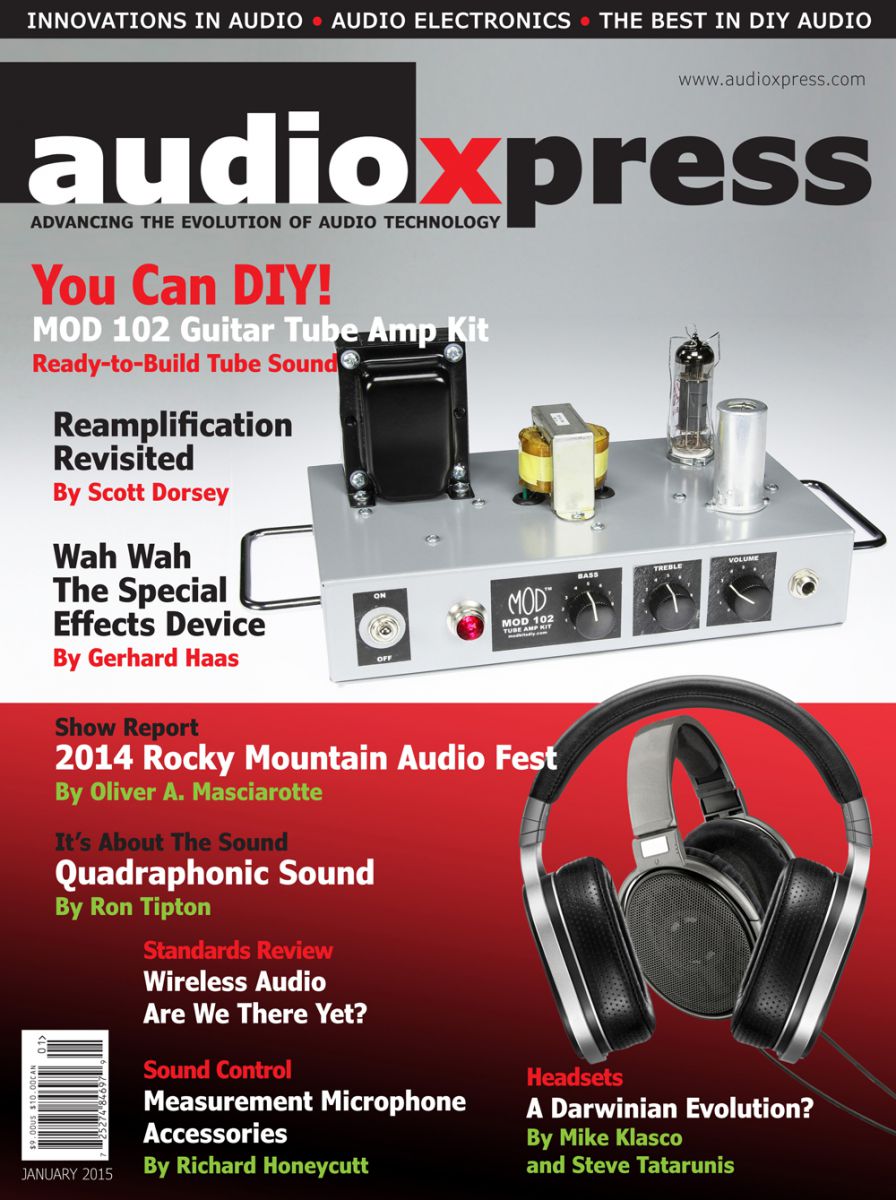 This January edition includes our exclusive report of the Rocky Mountain Audio Fest (RMAF) 2014—a three-day show that includes the CanJam showcase for the headphone-obsessed. Oliver A. Masciarotte details some highlights and trends in high-resolution audio, in-ear monitors, tabletop DACs, amplification, small speakers, and hi-fi furniture. “This year, RMAF also offered a glimpse into the fickle audio mind as well as the less well-heeled average music consumer. From headphones to lifestyle and analog chic, current trends and future directions for the audio industry were all on display,” he explains.

Highlighted on our cover is the MOD 102 Guitar Tube Amplifier Kit, designed for anyone who is interested in building a tube guitar amplifier head. This nice 5-W practice tube guitar amplifier kit is a fun and rewarding build experience that provides a great introduction to warm tube sound at an affordable price. The MOD 102 is sold by MOD Kits in the US and a non-US version using a worldwide power transformer was assembled and tested by our friends at Elektor-Labs (in The Netherlands).

audioXpress also invited Scott Dorsey to update his reamping project that modeled the source impedances of a couple typical guitar pickups. He wrote the original article more than a decade ago for Recording magazine. In “Reamplification Revisited,” Scott brings us an updated version of his Kludge reamplifier box with added detail.

Another great DIY project is detailed by Gerhard Haas, explaining how to build a Wah Wah effects device. The Wah Wah is a kind of formant filter that is installed inside a pedal and affects the frequency response, depending on the pedal’s movement. This extremely interesting effect was invented in the early/mid 1960s and had its heyday in the 1970s. The Wah Wah is currently experiencing a comeback.

In Standards Review, we continue to discuss the latest technologies in Wireless Audio. This time we look at the Wireless Speaker and Audio (WiSA) Association technology in more detail. We also reflect on ongoing efforts toward wireless high-resolution audio and the benefits to other applications, such as immersive audio experiences.

In Ron Tipton’s article series about the continuing quest for realistic recorded sound reproduction, we discuss quadraphonic design and formats. Ron also looks at how to we can still playback existing quadrophonic recordings by simply using available decoding software. He also shares a few options if we want to create new recordings in quad mode.

From speakers to headsets, Mike Klasco and Steve Tatarunis explore the “Darwinian” evolution of earphones and headphones from an audio engineering perspective. In this month’s article, the authors discuss a bit of history, the various types of headsets, headphone design techniques, and testing.

In our Sound Control column, Richard Honeycutt describes a variety of useful accessories available to measurement microphone users, including some required for special measurement conditions. In his Hollow-State Electronics column, Richard Honeycutt explains the challenges of moving from Paper to Prototype and the potential fun of experimenting with new circuits.
Your new issue of audioXpress is now available at www.gotomyxpress.com To become a member, visit www.audioxpress.com/page/audioXpress-Subscription-Services.html. You can also buy a single printed issue at /www.cc-webshop.com
related items

Get Ahead on Cones, Woofers, Compression Drivers and More with Voice Coil February 2020!

Capture All the Excitement of Audio with audioXpress February 2020!