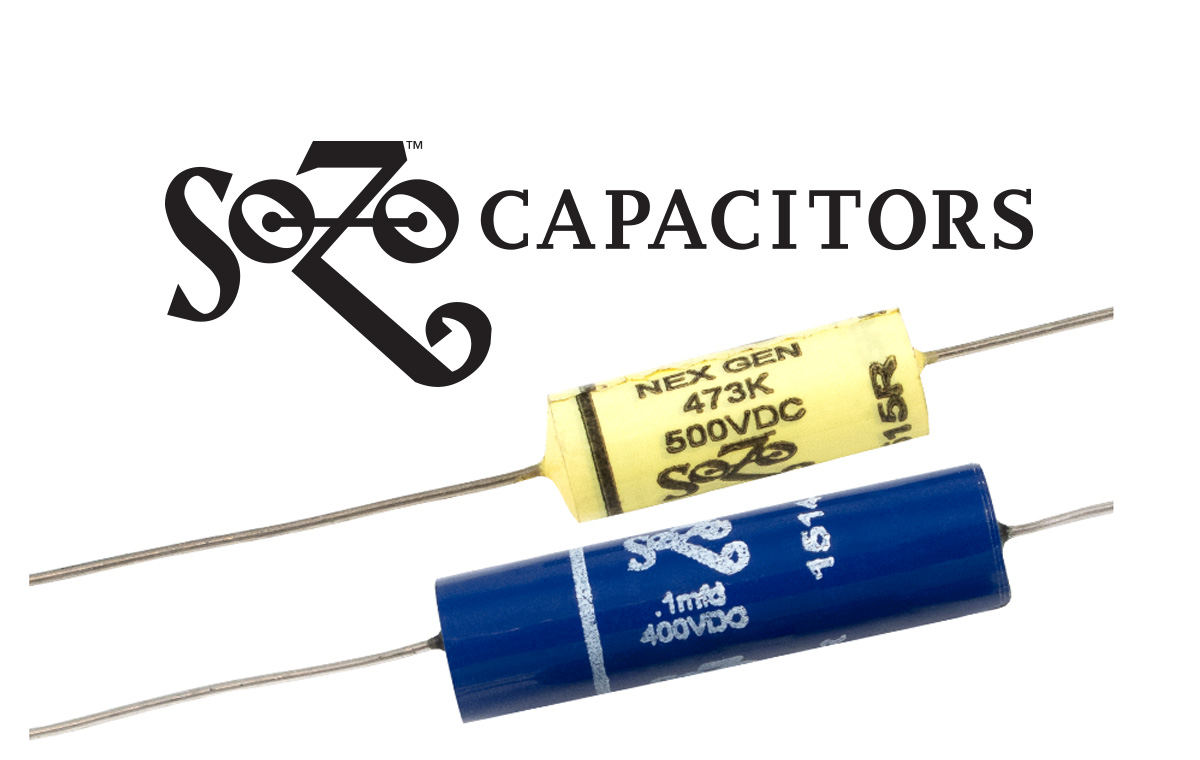 As CE Distribution explains, “SoZo caps are superbly built, excellent-sounding caps. When one considers the audio signal can pass through as many as ten capacitors before exiting the amplifier, you can see how these components play an extremely large role in the tone of an amplifier.”

SoZo Capacitors are the result of the work and extreme dedication of John Gaynor, a guitar player who started buying vintage gear in the early 80’s. He loved the sound of the original point to point wired amps but he soon understood that it was very difficult to find parts to restore the originals. John Gaynor worked on the restoration of old Vox, Hiwatt, Marshall, and many other guitar amps and he noticed how hard it was to find the right capacitors.

With the Internet, John Gaynor understood he could create a business out of developing and offering replacement parts for vintage tube amps. Focusing on capacitors, he started working with custom filter capacitors for Marshall and Fender amps, based on the same material used in the Phillips caps in the 60’s, like polyester (Mylar) and aluminum foil.

Out of that effort with vintage capacitors, SoZo Capacitors was born (SoZo is the Greek word for Salvation). After years of painstaking research and development, in 2003 he began manufacturing the SoZo Mustard Cap capacitors, which quickly caught on among discriminating musicians and amp designers. Now, SoZo has engineered capacitor product lines optimized for different products, including amps by Marshall, Fender, Vox, HiWatt, and others, as well as professional audio equipment from Neve, API, Neumann, Universal Audio, Urei, and virtually any quality gear from the 1950’s on.

SoZo Capacitors are currently used by some of the world’s best amp builders and designers, DIY amplifier enthusiasts, DIY tube audio aficionados and guitarists looking for a specific tone. Released in February 2014, SoZo’s new NexGen Vintage Mustard Capacitors are the latest and the most accurate Mullard/Philips replacement available. These NexGen capacitors are derived after years of listening, testing, research and development and are the latest in the evolution of tube amp capacitors. SoZo’s BlueMolded line of capacitors are also retrofits for Astron or Blue Molded caps used in vintage tweed, brown, and blackface Fenders.

CE Distribution is a wholesale distribution specialist of parts for guitars and amplifiers. CE has been supplying music stores, repair shops and OEMs for seventeen years, offering an extensive variety of products for guitar and guitar amps.
www.cedist.com
For retail sales, visit amplifiedparts.com
related items