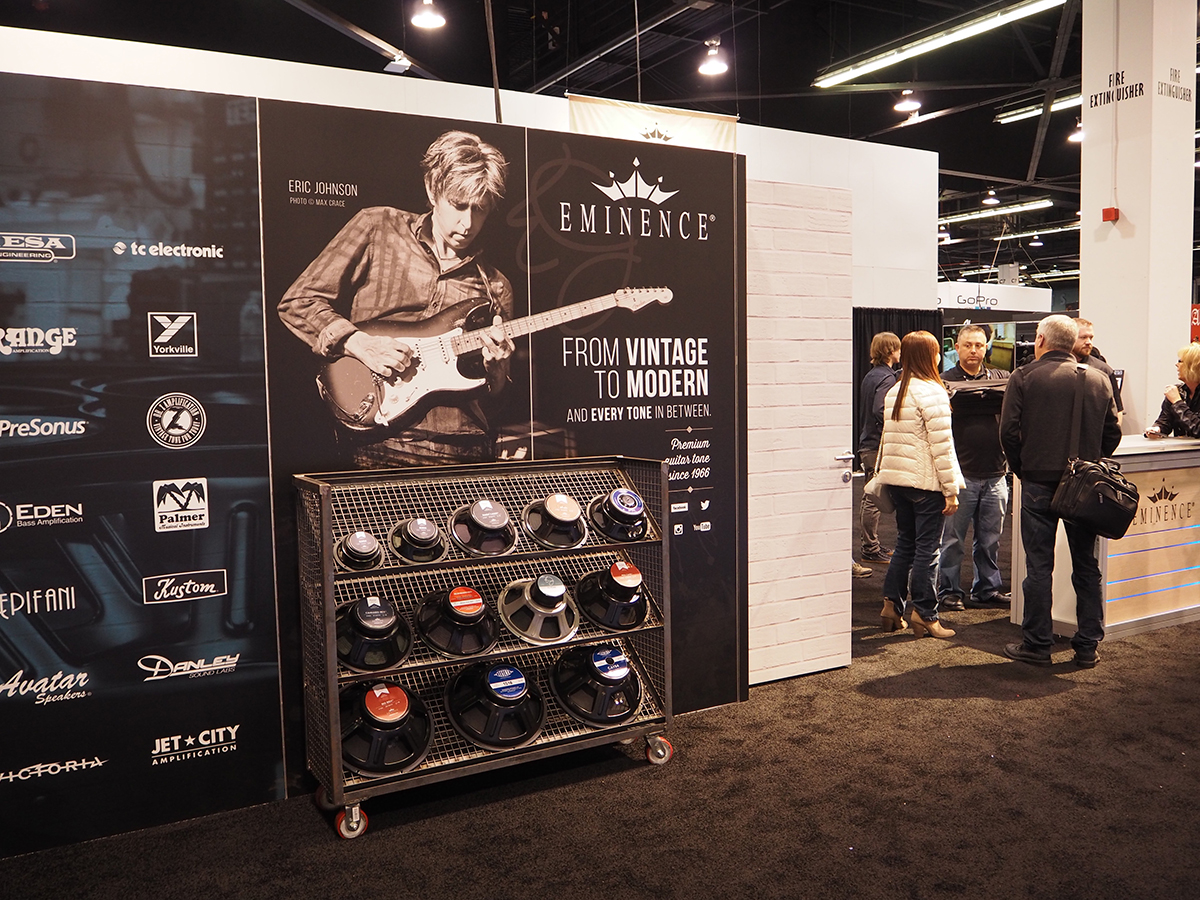 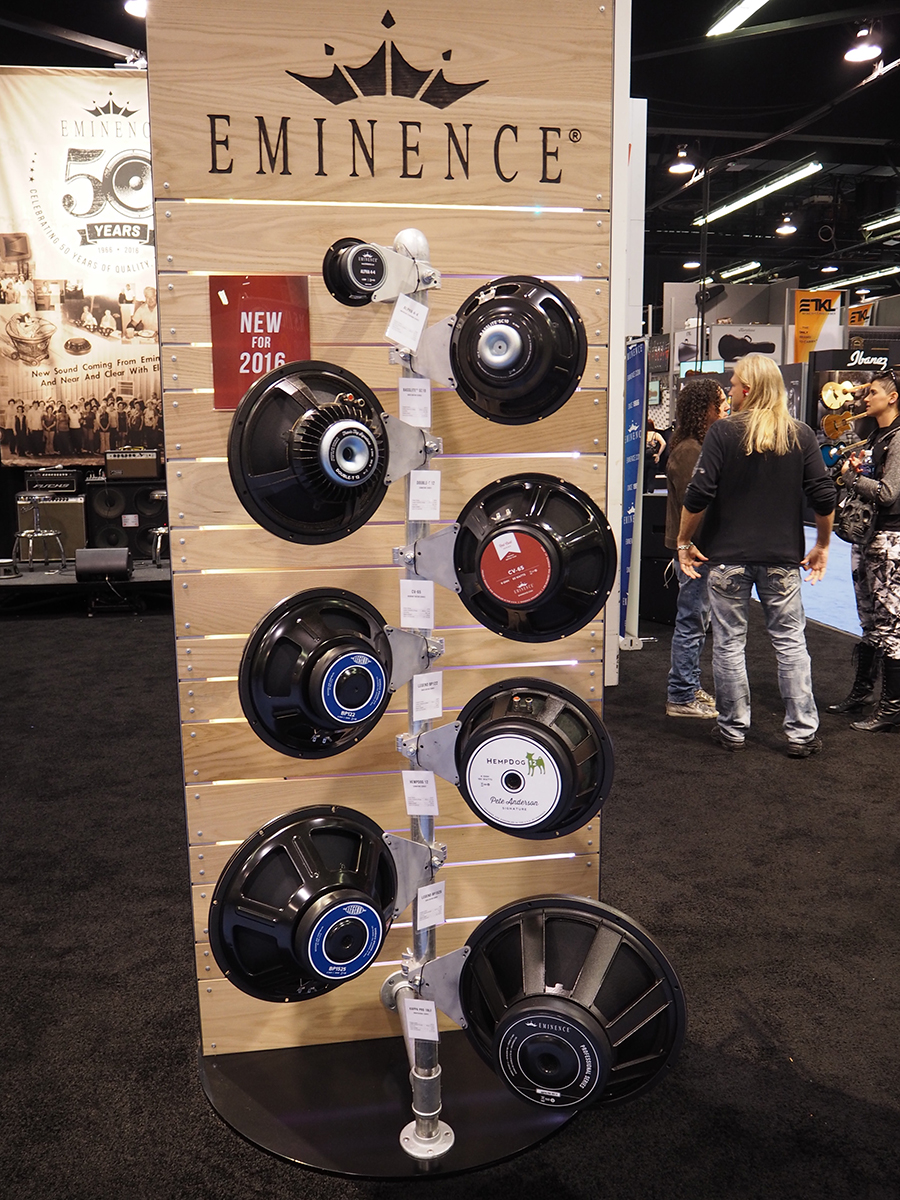 NAMM 2016 was an unforgettable show for Eminence and the loudspeaker industry in general. To celebrate their 50th anniversary, on Friday January 22, Eminence promoted a memorable party with amazing live music kindly provided by a remarkable line-up of artists and brand endorsers like Josh Smith (throughout the night his band - Nick Campbell on bass, Jaydon Bean on drums and an amazing Hammond organ player (Sorry we didn’t get the name) - provided the solid foundation for all the guest artists), Kirk Fletcher, Eric Gales, Gary Morse, Joshua Ray Gooch, Dave Baker, Tomo Fujita and Matt Schofield, Mark Letierri (from Snarky Puppy). Extraordinary artists and a great demonstration of talent from a younger generation of Blues and country-blues guitarists which can be seen and heard in some videos we did and have been meanwhile shared. An important note to praise the sound of the Morgan Amps (morganamps.com) with Eminence speakers used on stage.
See some extraordinary musical moments of the Eminence 50th Anniversary party @ NAMM 2016, here, here, here and here.
Rob Gault, Chris Rose, Shannon Rose, Gary Morrison and many others in the Eminence family welcomed distributors, press and friends in the best way. Live music, great food and two open bars provided the perfect environment for a night of celebration, attended also by many representatives of Eminence’s clients, from Fender to Yamaha, QSC, Peavey, Ampeg, Klipsch, Aguilar, PreSonus, Orange and so many other companies. The celebration also included awards for Eminence’s best clients and distributors in 2015, including Fender, QSC Audio and Adam-Hall (Eminence’s European distributor).

A little recap on 50 Years
In 1966 Bob Gault founded what was to become the world’s largest loudspeaker manufacturing company after working as an engineer for Magnavox and CTS (Chicago Telephone Supply). Gault started Eminence building only three 18” speakers per day, based on a commitment from Ampeg’s Everett Hull. Gault was the president of Eminence from the company’s inception until 1992. He officially retired in 1993, but continued to make valuable contributions to the company. Gault passed away on October 4, 2002. Under the leadership of Gault and most recently his son, Rob, the company’s capacity grew to over 10,000 speakers per day, employing nearly 200 people.

Eminence, Kentucky (population 3000) is centrally located in the heart of Kentucky, between Louisville and Lexington, Kentucky and Cincinnati, Ohio. Bob Gault chose this location as it was ideally situated for shipping products all over the USA. The Eminence and Henry County community could also provide the labor needed to manufacture products on a large scale. And after over 45 years, Eminence, Kentucky continues to provide ideal conditions for the design, assembly and distribution.

The first Eminence facility, located in downtown Eminence, employed around thirty people. The building was less than 6,000 sq. ft. and production was often less in one week than it is in one hour at our present facility. In 1972 Eminence Speaker moved to a new location in Shawnee Industrial Park on Mulberry Pike where it remains today.

Originally a supplier to OEM manufacturers only, Eminence began distributing its own line of branded products in 2000, and currently distributes to over 90 countries. In 2006, Eminence expanded its worldwide operations with the addition of Eminence Dongguan Enterprise Ltd. The 96,000 sq. ft. facility was part of the international Eminence effort to provide loudspeaker manufacturing capability in areas strategically located near manufacturers of musical instrument and professional audio products. In 2009, Eminence further expanded its Asia operations with the addition of the Eminence Cabinet Shop, providing turn-key solutions for professional audio enclosures, finished systems and components, and guitar and bass amplifiers.


Nw products for 2016
At the 2016 Winter NAMM Show Eminence announced the following new Pro Audio and Musical Instrument Loudspeakers for 2016. 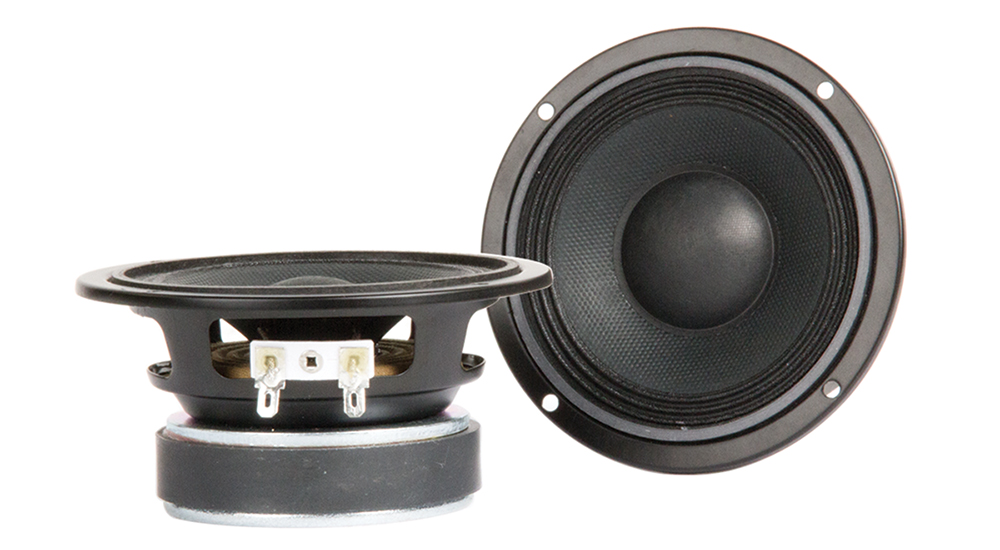 Alpha 4
Perfectly suited for line arrays, car doors and side panels, and other tight fitting applications, the Alpha 4 is a very versatile 110 watt driver that can be used full range, as a midbass, or as a midrange. They can be stacked by themselves in a column for vocal applications, or in conjunction with a tweeter and a sub for compact, high performance PA or MI applications. Available in 8 and 4 ohm.
$29.99 MAP/ Sold in Pairs 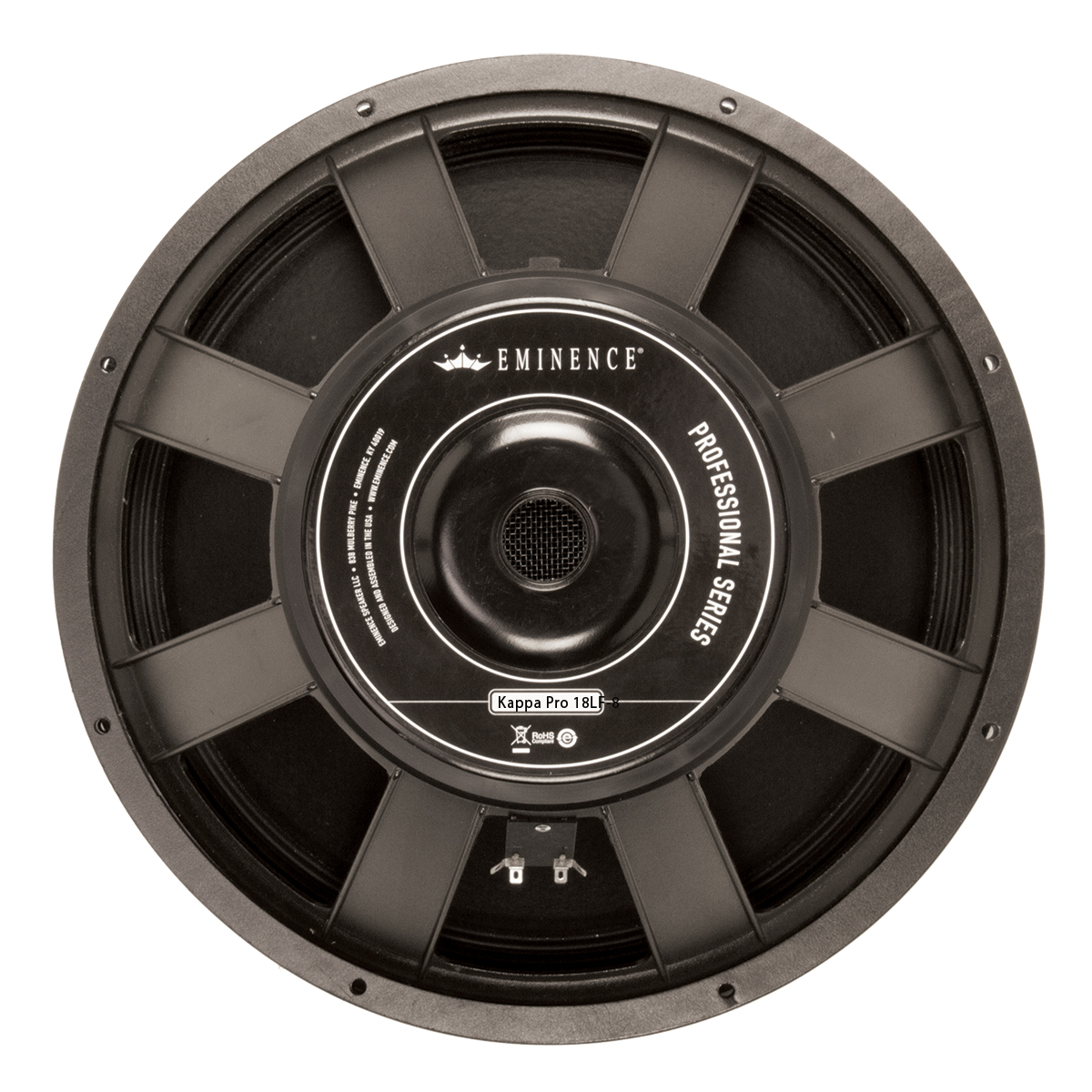 Kappa Pro 18LF
The Kappa Pro 18LF provides tons of low frequency output in a lightweight, durable cast aluminum chassis. Featuring a 3” voice coil and a usable frequency range of 38 Hz – 700 Hz, it can be used as a subwoofer in small to medium sized boxes, a woofer in large three-way PA enclosures, or as a high-power bass guitar woofer. "The 1,600 watt program power rating will give you the confidence to crank them up," said Jerry McNutt, Product Design Manager at Eminence. "The Kappa Pro 18LF is well-suited for new projects, and works well as a replacement for many single and double subwoofer cabinets." Available in 8Ω, the Kappa Pro 18LF offers 98 dB of sensitivity.
$174.99 MAP

CV-65
The Redcoats have not fired their last shot in the revolutionary war of guitar tone. New from Eminence is the CV-65, a continuation of their ceramic vintage style British-voiced guitar speakers. The 8Ω CV-65 offers classic British tone with modern power handling, and features warm, throaty mids, sweet, articulate highs, and nice, detailed harmonic complexity. Handling 65 watts of power, the CV-65 utilizes a 34 oz. ceramic
magnet and a 1.75” voice coil. Compared to the 75 watt model, the CV-65 is more round and full in the lows, less aggressive in the mids, but warm and throaty, and is more focused and articulate on the highs.
MAP: $99.99 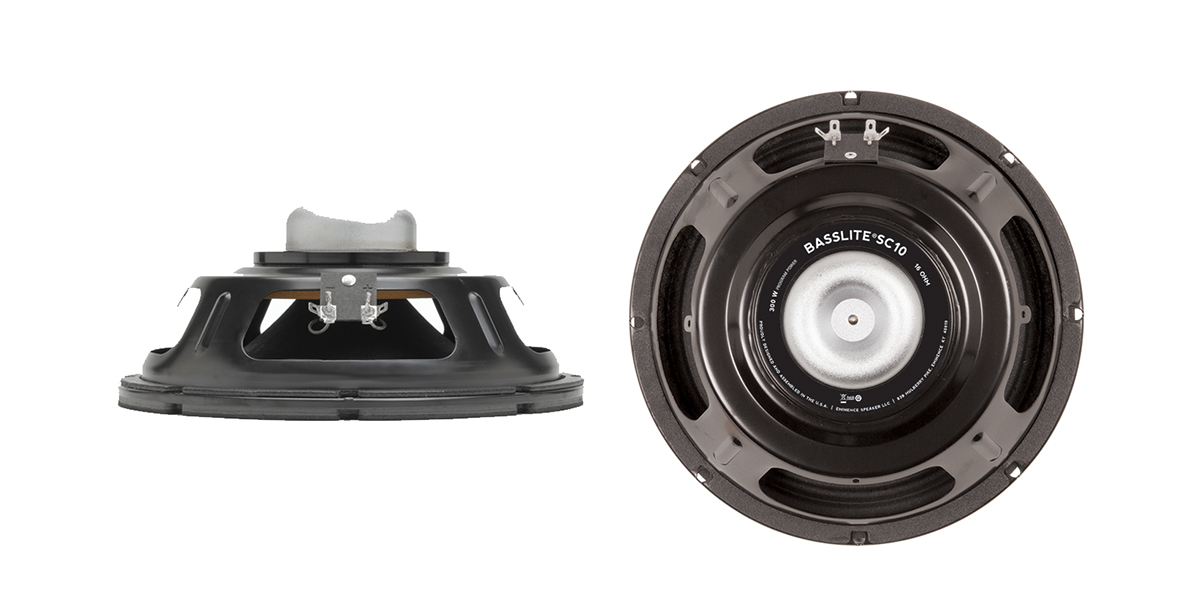 Basslite SC10
The Basslite series continues to be a popular choice for bass players who are looking to reduce the weight of their rigs without sacrificing performance. The new Basslite SC10 is a 10” speaker optimized for sealed bass cabinets, and features an ultra-lightweight 4 oz. neodymium magnet and a 2” voice coil.
“We wanted to design something that was designed specifically for sealed 4x10 and 8x10 cabinets.” says Anthony Lucas, Design Engineer at Eminence. “We’re offering them in 16 ohm and 32 ohm options as we envision them for multispeaker configurations. The 16 ohm model has a program power rating of 300 watts, and the 32 ohm is rated at 200 watts.”
$89.99 MAP

HempDog 12 – Pete Anderson Signature
Eminence has teamed up with multi-platinum, Grammy Award-winning producer/guitarist Pete Anderson to create signature guitar tone. The 8Ω HempDog 12 offers a more neutral voicing with clarity and full, round lows, but with the added warmth only a hemp cone can provide. Housed on a rugged cast aluminum chassis, the 80 oz. ceramic magnet and 2.5” edgewound voice coil provide higher efficiency and 150 watts of power.
“Pete was interested in experimenting with two of his favorite Eminence speakers: the Cannabis Rex for it’s warmth, and the Legend EM12 for its neutral, clear tone.” said Anthony Lucas, Design Engineer at Eminence. “When I finally settled on the EVM12L guitar speaker earlier in my career I thought I was set” said Anderson, “But with Eminence allowing me – or should I say encouraging me – to reach beyond that, the creation of the HempDog has exceeded my expectations. It has the hi-fidelity I require plus the warmth of hemp, an outstanding combination that covers all genres of music. I can not think of any other speaker company that encourages this type of dialogue with musicians. I couldn’t be happier. “

Legend BP122 and 1525
Eminence’s 10” Legend BP102 has been a favorite among bass players because of its rich, warm tone and the fact it can play really low in sealed cabinets. Expanding the offering, Eminence has developed a 12” and 15” model with the same versatile skill set. With a program power rating of 500 watts, the BP122 features a 2” voice coil and a usable frequency range of 35 Hz – 2.3 kHz. The 15” model is rated at 700 watts, utilizes a 2.5” voice coil and has a usable range of 35 Hz – 2.1 kHz.
“The new BP122 and BP1525 will work great in small sealed enclosures and deliver rich, warm tone and deep bass from your instrument.” said Jerry McNutt, Product Design Manager at Eminence. “They will also be at home in many professional audio and home hi-fi applications, just like the 10” BP102 does now.”
Legend BP122 | $84.99 MAP
Legend BP1525 | $99.99 MAP
www.eminence.com
related items