Definitely a first. English brand Bowers & Wilkins was never a conventional speaker manufacturer, always venturing into new areas, from being a record company, with its B&W Music label, to sponsoring music festivals and, in recent years, trying multiple digital lifestyle product segments. Now, B&W decided to create a Sound System for music events. Not for sale, at least for now…
As the Bowers & Wilkins marketing initiative states, “although concerts and live events are often fantastic, all too often something is missing from the experience: sound quality. It’s a problem that got us thinking: what if we could take the hi-fi experience and scale it up to fill a gig venue? From that idea, the Bowers & Wilkins Sound System was born. The Sound System will not be commercially produced but you can experience it at Bowers & Wilkins music events.”

This statement alone makes us wonder, what type of live events have the B&W folks been attending lately? We are not so certain that taking “the hi-fi experience and scale it up to fill a gig venue” is how you can describe the experience of a live event these days – at least not for popular music. Maybe if we were describing some concert hall installation, but definitely not with the type of music the B&W marketing people have chosen to demonstrate its “Sound System”.

The result of this unusual initiative will be seen and heard at the Primavera Sound festival, in Barcelona, where the Bowers & Wilkins Sound System will debut to a mix of DJ sets and live acts in a large igloo tent with 360° video projection. It’s not exactly the main stage, but the B&W Sound System will at least be “public addressing” a live music area with the acts being streamed live on the Internet. Obviously B&W will also organize exclusive listening sessions inside the “igloo”.

But how do you combine “true hi-fi sound” with live electronic, dance and rock music? Especially since the B&W Sound System design is more reminiscent of a seventies main monitor studio system (think UREI) than anything close to a PA system (from the last 30 years, at least). 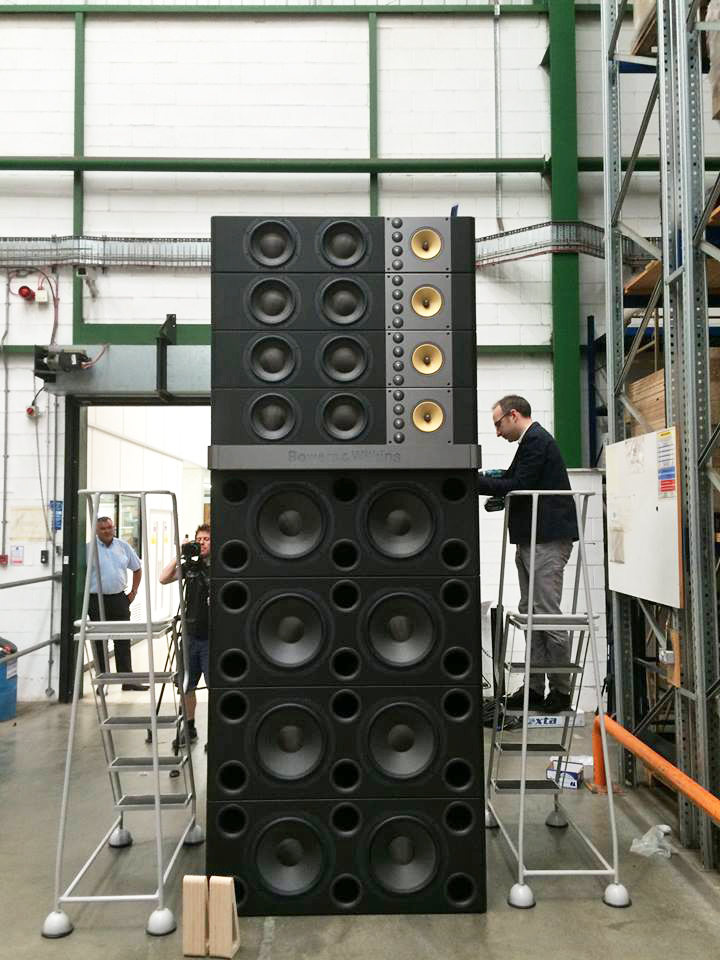 According to Bowers & Wilkins, the Sound System overcomes the problems of dynamic compression inherent in traditional PA systems by adapting the acoustic design of four flagship hi-fi and studio speakers in a massively enlarged format. “The foundation of each Sound System stack is its four rock solid, fully braced low frequency enclosures, which incorporate tried and tested Bowers & Wilkins bass driver technology”.

Another highlight in the Sound Systems are the specially made cabinet enclosures, which the brand says are “unlike anything else ever manufactured by Bowers & Wilkins. However the internal Matrix bracing system and Flowport technology are key Bowers & Wilkins innovations from our production speakers”.
www.bowers-wilkins.eu
related items