AudioControl hosted a press conference at the ISE 2015 show to introduce its most recent line of U.S.-made home-theater and installation processors and amplifiers. The highlights included the European debut of the compact amplifier/DAC, Bijou 600, recently awarded CEA Audio Product of the Year at the CES 2015 show.
Seattle-based AudioControl, made the European debut of its Bijou 600, the recently announced Consumer Electronics Association’s Audio Product of the Year, at Integrated Systems Europe 2015. The CEA Mark of Excellence awards recognize the best in custom integration and installed technology and the winner is selected by a panel of industry experts and honored at the CEA TechHome Mark of Excellence awards at International CES 2015.
The Bijou 600 won the prestigious Audio Product of the Year, recognizing it as “the industry’s best performance partner for adding additional audio zones to the home and boosting the output of TVs, soundbars, streaming audio and gaming environments.” This high-power slimline TV/zone amplifier and DAC is rack-mountable and also compact enough to hide behind the latest thin displays or in any additional zone in the home.

The Bijou 600 is tailor-made to improve demanding audio system requirements, offering custom installers 2x100 watts per channel at 8 ohms to power better performing speakers within a convenient 1U, ½ rack chassis measuring just 1.7” tall. Also capable of outputting 200 watts at 4 ohms or acting as a 400-watt mono-block that is stable down to 3.6 Ohms, the Bijou 600 can optimize audio output for TV zones, digital streaming systems such as Sonos, or audio configurations including low impedance speakers. The Bijou 600 features a renowned Wolfson DAC and is equipped with a number of bass management features including a subwoofer mono out, AudioControl’s patented AccuBASS equalization as well as selectable high-pass and low-pass crossovers. 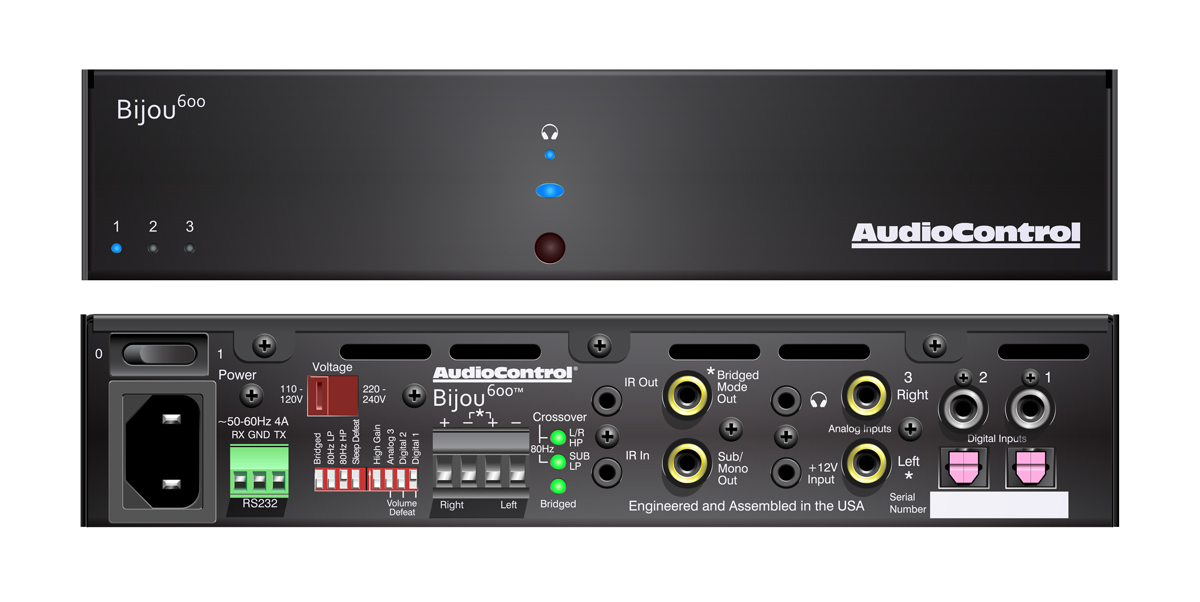 “With the tremendous vote of confidence bestowed on the Bijou 600 by CEA and its members, we continue to offer integrators solutions that make the difference in Making Good Sound Great”, commented Alex Camara, CEO for AudioControl. “Distributed audio and secondary zones don’t have to experience a huge quality drop-off, and our Bijou and Rialto models make sure that the industry can now fix that problem without contributing disruptive size to the equation. AudioControl’s 2015 lineup offers even more outstanding analog and digital audio system performance right across the entire home.” 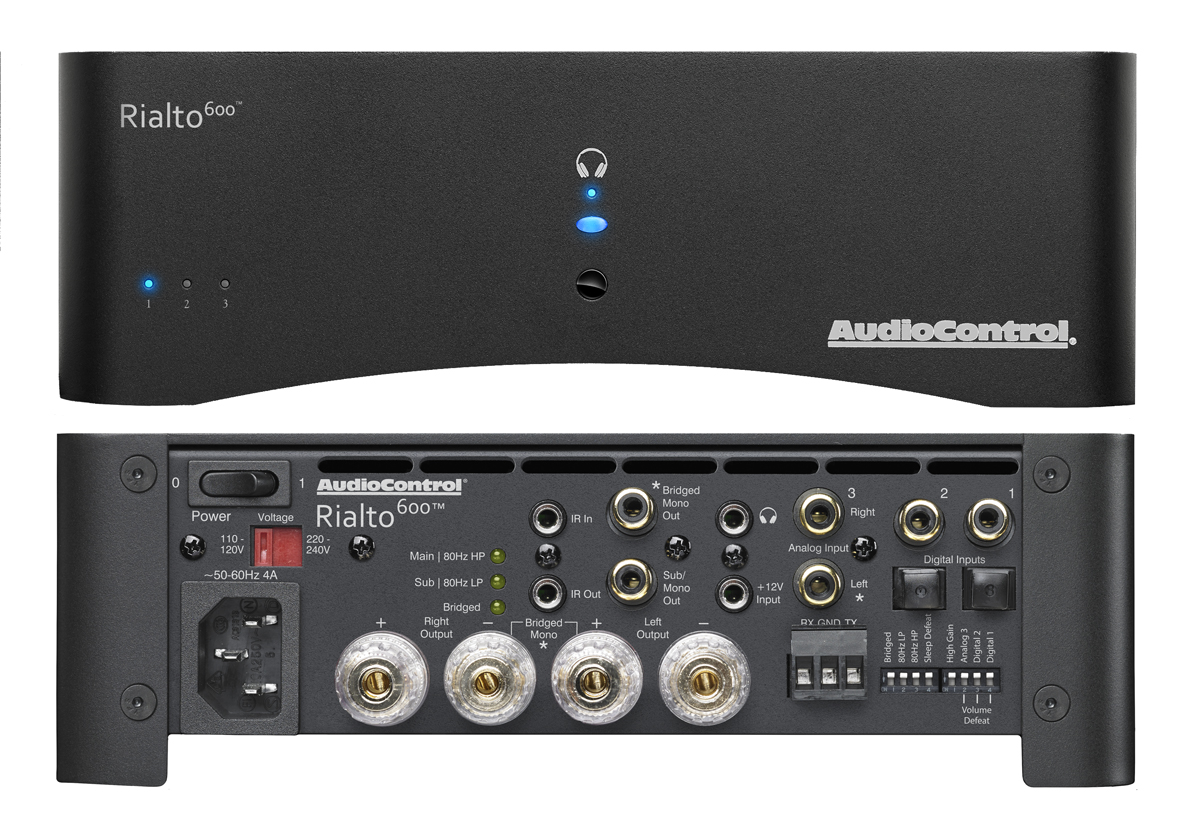 Since the release of the Rialto 400, AudioControl has led the way in high-performing compact zone-amplifiers. Concurrent with the new Bijou series is the new Rialto 600, which incorporates powerful key features in the compact Rialto form factor. Both the Rialto 600 and the Bijou 600 offer installer-friendly features including switchable inputs (including analog, digital COAX, digital Optical), combined with variable volume control circuitry controllable via discrete IR or RS232 commands. Both models add the ability to control source selection, volume functions, and AccuBASS via the included remote control or automation commands. Committing to the long-term performance users require, both products carry AudioControl’s renowned five-year warranty.

New Custom-install Solutions
Based on a 12-month market analysis and more than 60 custom integration companies, the AudioControl Engineering Sound Lab developed the new Bijou and Rialto series products to satisfy the needs of the audio marketplace. But AudioControl also made the European debut of its new Architect Multi-Room Amplifier, The Architect Model 2660. AudioControl Architects are amongst the world’s best selling multi-zone amplifiers ranging from 2 channels up to 16 channels of cool-running, high performance amplification, manufactured in the USA exclusively for the custom-install market.

Another new product being introduced to the European markets was the Director Model M6400 network, multi-zone matrix-amplifier.
Part of AudioControl’s new Matrix M-Series, the Director Model M6400 builds upon the success of AudioControl’s ‘The Director’ D-Series driving sixteen channels of high-power amplification in a 2U chassis that delivers 65 watts per channel at 8 Ohms, 100 watts per channel at 4 Ohms and 175 watts at 8 Ohm bridged, all channels driven. The M6400 features on-board digital signal processing, graphic and parametric equalization by zone, network monitoring, and programming plus the addition of Volume Control, channel/zone grouping and zone audio presets. It also allows individual channel and zone selection via standard TCIP, the ability to bridge into low impedances while delivering incredible power and AudioControl’s audio performance.

The Director Model M6400 harnesses the power of DSP processing to enable full matrix flexibility of any input to any output. The matrixing capabilities of the Director M series allow any of eight analog or two digital inputs to be routed to any zone output. The Director Model M6400 includes two digital SPDIF inputs plus two SPDIF outputs that are included in the matrixing so that any one of the input sources can be routed through the digital outputs. These digital outputs can be connected to Director M series digital inputs so that multiple amplifiers can receive any signal from any inputs from any of the amplifiers. The Director Model M6400 has the benefit of operating either as a standalone matrix-amplifier or as part of a 3rd party control systems from companies including Crestron, Savant or Control 4.
www.audiocontrol.com
related items