Korean company Astell&Kern (iRiver) has managed to forge an interesting niche market by developing and manufacturing portable high-resolution audio players. The company announced their latest-generation flagship portable HRA Player, the AK380, with 32-bit/384kHz PCM and DSD support. At the same time, Astell&Kern launched the much more affordable AK Jr.
Not a single manufacturer in the world has been able to become even remotely close with the exquisite industrial design and seamless hardware/software integration of Apple’s products. And since the iPhone, there was little else the Chinese and Korean companies could do but to copy details - such has the packaging.  Other companies, like Astell&Kern followed a slightly different approach, since they didn’t exactly need to compete on the same level as the iPhone (and knowing they couldn’t, no matter how much they would try). Their target is to serve demanding users which are looking for higher resolution audio quality, not supported by Apple’s iPhone, iPod Touch or iTunes, but expecting a similar level of robustness, reliability and seamless experience. 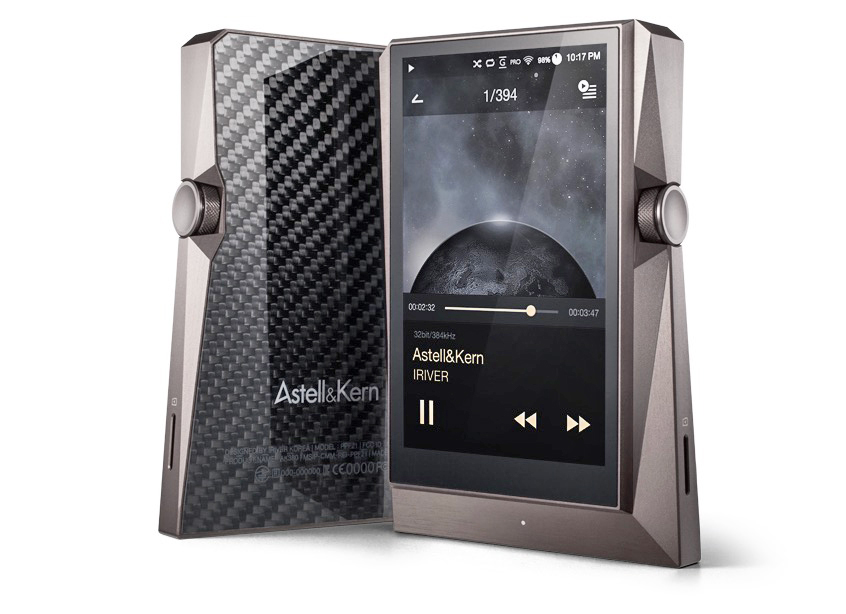 The high-resolution audio craze and the booming headphone market offered Astell&Kern the opportunity and the company developed a series of “hybrid” mobile players - in the sense that they focused on the values of the high-end audio market for the electronics, while adopting technology and innovations from the smartphone industry (touchscreen interfaces being the most obvious similarity).

The result is certainly not something for the masses, especially considering the price, but Astell&Kern’s first mobile music players were original because their design looked like something inspired by science fiction movies. Still, the user experience was not better than what you have with an iPod, especially because of the screens and interface (but basically we could say the same from all the early Android devices…). Apparently, the company has now managed to improve their designs and the latest products improve things considerably.

Encouraged by their relative success in the last two years, Astell&Kern now introduced the new AK380 player, adding support for native 32-bit PCM playback, introducing new optional docks and expanding the features. This is now their flagship portable hi-res audio player, which made its worldwide debut at the High End Show 2015 in Munich.

At the same time, in April 2015, Astell&Kern launched their new AK Jr player, which looks a much more reasonable device, thin and elegant in design, with a large touch screen that resembles any smartphone and that, above all, provides everyone the opportunity to listen to high resolution audio because it costs essentially the same as any standard smartphone. The AK Jr fits comfortably in any pocket and the full aluminum body and textured aluminum volume wheel offer an efficient operation with one hand. 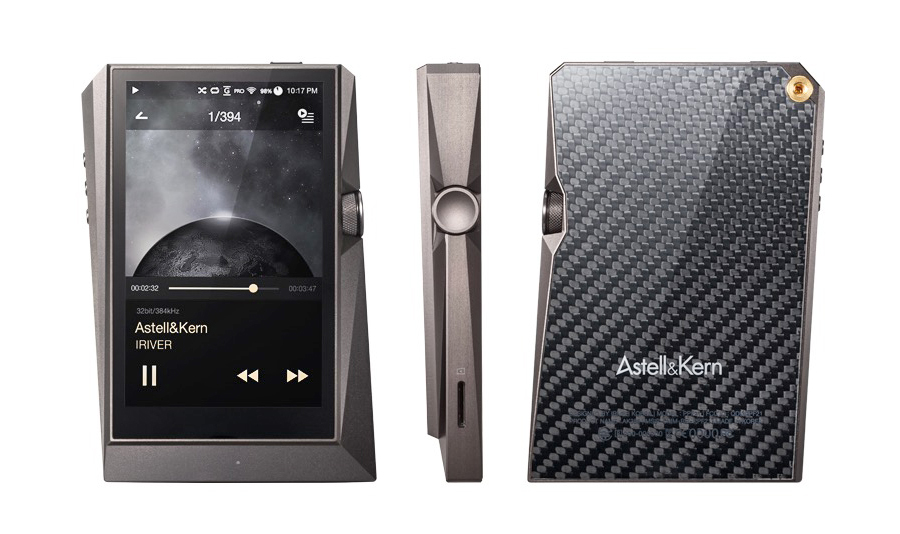 Forget portable. It’s a media player
The first impression we had with the Astell&Kern AK380 is that, it doesn’t matter if it’s portable or not. In fact, for the hefty price, features and power, it sounds much more reasonable to think of it as a compact media player and DAC, that happens to be something we can actually take with us on holidays.

New to the Astell&Kern portable player line is the AK380’s ability to add features and functionalities with the addition of separate docking-stations. Utilizing the microUSB jack (being such a new device one would expect the company to adopt already the new USB Type-C connector, but apparently the high-end audio market remains stuck with USB 2.0, in contrast to the professional audio industry) and new 4-pin balanced out jacks on the bottom of the player, the AK380 slots into the expansion docks, providing a better connection to external equipment without adding additional bulk to the player.

According to Astell&Kern, expansion docks and accessories available for the AK380 will include an external portable amp to drive a wide variety of inefficient headphones and IEMs, a docking cradle to charge via USB or using the player as a USB DAC and an external CD-ROM drive to allow users to rip music from discs directly to the AK380, without the need for a computer (really?…).

To justify the investment on the AK380, there’s a 4-inch high-resolution TFT-LCD screen, 256GB of internal memory with one microSD card slot supporting up to 128GB for a total of 384GB of storage and Bluetooth 4.0 support. The device uses aircraft grade aluminum, like previous Astell&Kern players and features unbalanced AND balanced analog outputs. It also features Wi-Fi connectivity to download and stream music wirelessly. More importantly, the AK380 can be used like any other USB DAC, allowing connecting the player to a computer to bypass their internal sound card and get high resolution sound from any PC or Mac music player with support for those file formats.

Otherwise, the AK380 has built-in DLNA 1.0 support and there’s an AK Connect app for iOS and Android-based smartphones and tablets, which basically controls playback and streams music directly to the AK380. Price will be $3,499. Yes… 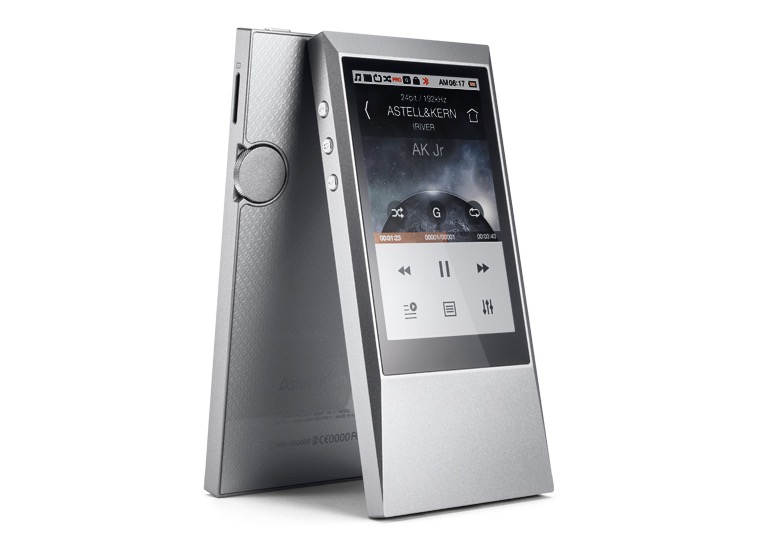 A smartphone for HRA
Much more reasonably priced (nine times less than the AK380, in fact), the new Astell&Kern AK Jr player looks and feels like a real portable audio player, robust and usable. I guess that iPhone users will struggle with the user interface (yes, the bar was set pretty high…) but any Android user will feel perfectly at home.

The new AK Jr also supersedes previous players from the brand, like the original AK100, by providing similar or better specifications at a much more affordable price. The output level of 1.95 VRMS and the 2-Ohm output impedance is one of the improvement areas, allowing the new player to support various types of earphones and headphones without a separate amplifier.

In terms of formats, the AK Jr supports DSD up to 2.8 MHz but it converts those files to PCM on playback. Nevertheless, for a reasonable price, we get 24-bit up to 192kHz PCM and support for all major file formats. Also, the AK Jr can be used as an external DAC (sound card) when connected to a PC or Mac via USB and features a Wolfson WM8740 chip for that purpose. 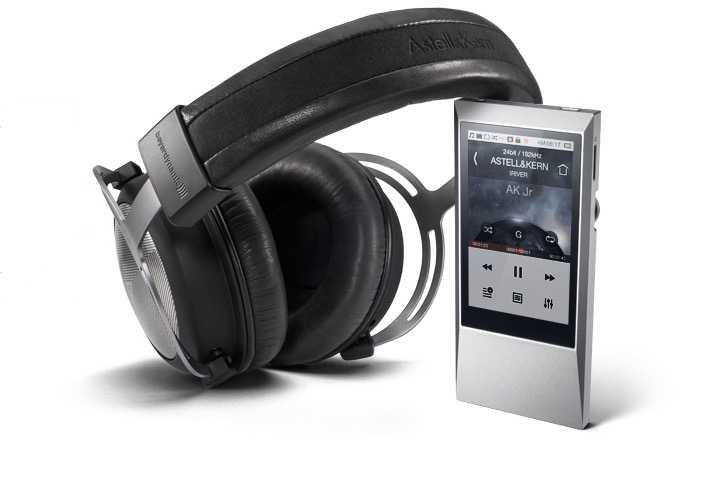 The main argument for the AK Jr is the nicer 3.1” LCD touchscreen with smartphone-like full touch capabilities. Contrary to the company’s earlier players, the AK Jr is able to display full album covers. In terms of storage, the AK Jr is limited to 64GB of internal memory and supports microSD cards up to 64 GB - enough to store 1,250 24/96 high-resolution audio files.

The most surprising about these devices - and the AK Jr in particular - is how much pre-iPhone and pre-iPod they still feel and one wonders what would happen if Apple decided to introduce HRA support in the near future. Clearly there is a niche market begging to be disrupted.
www.AstellnKern.com
related items