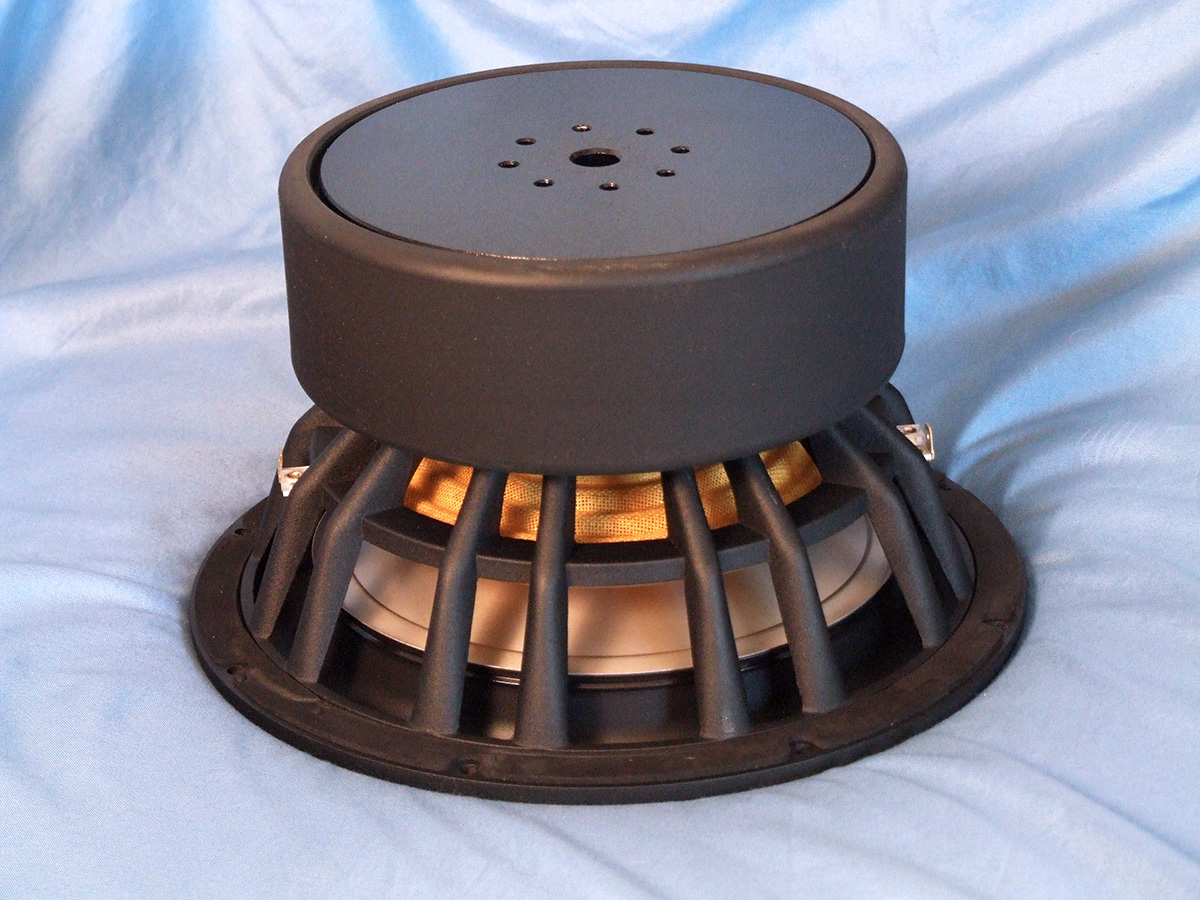 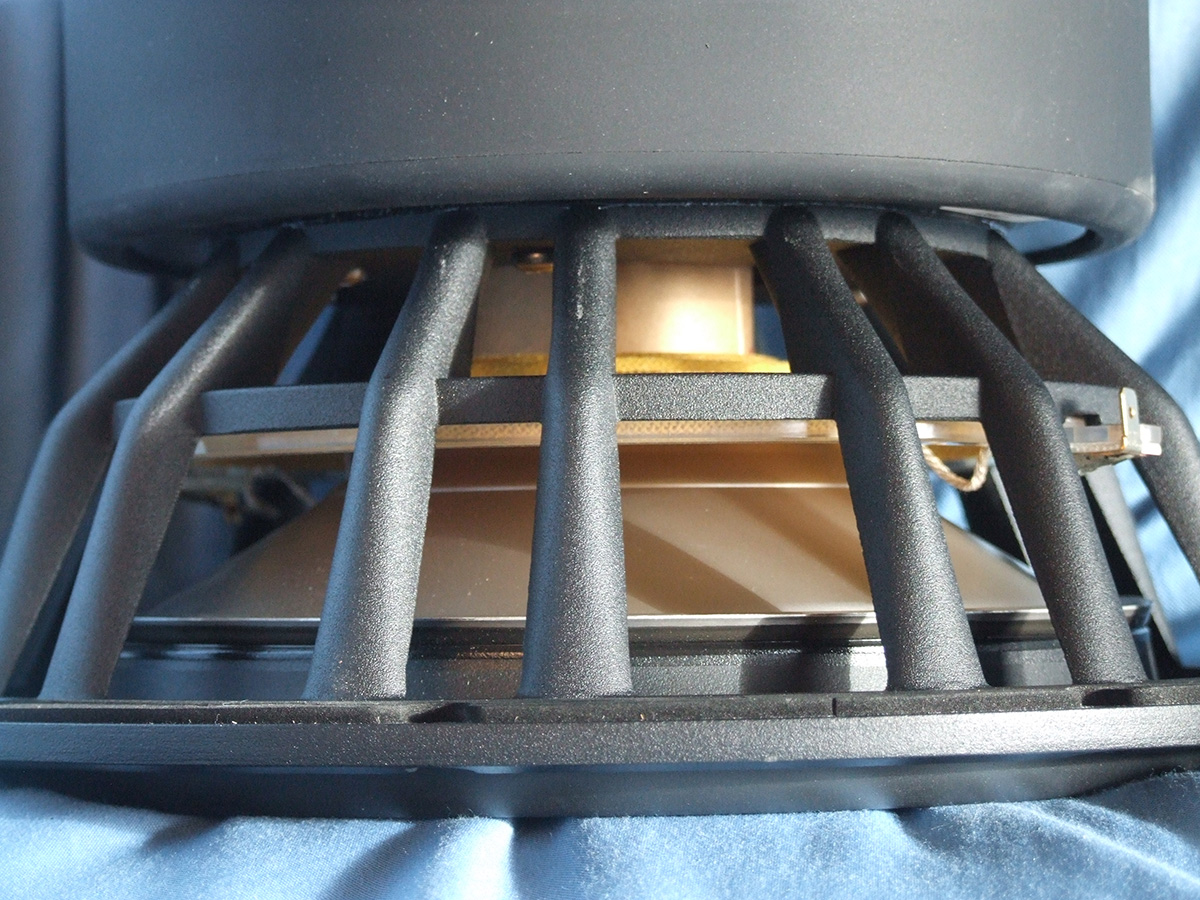 The Taiwan versions were the D1004 (four layer) and the D1001 (two layer), while the new Extreme series made in Norway updated versions are the XM004-04 L26RO4Y four-layer versions, and the XM001-04 L26ROY. SEAS’ L26ROY has a well-appointed feature set that includes a proprietary cast 16-spoke (eight twin spokes) cast-aluminum frame that has minimal reflection surfaces and is completely open 1.5” deep space below the spider mounting shelf (see Photo 1). Other features include the incorporation of a very stiff and rigid aluminum cone with the outside edge of the cone turned down, further stiffened by an inset 4” diameter concave aluminum dust cap. Compliance is provided by a finite element analysis (FEA) optimized low-loss (high Qm) NBR surround plus a 6” diameter flat conex spider (damper). Tinsel lead wires are stitched to the spider and attached to gold-plated terminals located on opposite sides of the frame to prevent rocking modes.

This format drives a substantial amount of air out the gap area and across the front plate below the spider mounting shelf for enhanced cooling of the motor system. Additional cooling is accomplished with eight 7 mm diameter vents in the cone below the dust cap. The L26ROY further incorporates a copper cap on the pole piece as a shorting ring (Faraday shield) that reduces distortion caused by eddy currents.

I used the LinearX LMS analyzer and VIBox to measure both voltage and admittance (current). Sweeps were generated in free-air at 0.3 V, 1 V, 3 V, 6 V, 10 V, 15 V, 20 V, and 30 V. The measured Mmd provided by SEAS was used rather than a single 1 V added (delta) mass measurement. It should also be noted that this multi-voltage parameter test procedure includes heating the voice coil between sweeps for progressively longer periods to simulate operating temperatures at that voltage level (raising the temperature to the first and second time constants). The 16 sine wave sweeps for each woofer were further processed with the voltage curves divided by the current curves to produce impedance curves.

Phase curves were generated using the LEAP phase calculation routine, after which the impedance magnitude and phase curves, plus the associated voltage curves were then copy/pasted into the LEAP 5 Enclosure Shop software’s Guide Curve library. This data was then used to calculate parameters using the LEAP 5 LTD transducer model. Because most manufacturing data is produced using either a standard transducer model or in many cases the LEAP 4 TSL model, I also generated LEAP 4 TSL model parameters using the 1 V free-air that can also be compared with the manufacturer’s data. Figure 1 shows the 1 V free-air impedance plot. Table 1 compares the LEAP 5 LTD and LEAP 4 TSL Thiele-Small (T-S) parameter sets for the L26ROY driver samples along with the SEAS factory data.

From the comparative data shown in Table 1 for the 10” 4Ω SEAS subwoofer, you can see that all four parameter sets for the two samples were nearly identical and correlated well with the factory data. Following my normal protocol for Test Bench testing, I used the Sample 1 LEAP 5 LTD parameters and set up two computer box simulations: one in a 0.71 ft3 Butterworth-type sealed enclosure with 50% fill material (fiberglass) and the second example in a QB3 quasi second-order Butterworth) vented alignment in a 1.14 ft3 box with 15% fill material and tuned to 27 Hz.

Figure 2 gives the results for the L26ROY in the sealed and vented enclosures at 2.83 V and at a voltage level sufficiently high enough to increase cone excursion to Xmax + 15% (16.1 mm for the L26ROY). This resulted in a F3 of 46.2 Hz (-6 dB = 38.5 Hz) with a Qtc = 0.72 for the 0.71 ft3 closed box and a -3 dB for the QB3 vented simulation of 39.4 Hz (-6 dB = 31.6 Hz). Increasing the voltage input to the simulations until the approximate Xmax +15% maximum linear cone excursion point was reached resulted in 114 dB at 60 V for the sealed enclosure simulation and 115 dB also with a 60 V input level for the larger passive radiator box. Figure 3 shows the 2.83 V group delay curves. Figure 4 shows the 60 V/60 V excursion curves. As with all vented enclosures, a steep active filter high-pass would limit excursion below 20 Hz and allow for a somewhat higher maximum SPL.

Klippel analysis for the SEAS L26ROY (our analyzer is provided courtesy of Klippel GmbH), which as usual was performed by Patrick Turnmire, Redrock Acoustics, produced the Klippel data graphs shown in Figures 5–8. If you read the MISCO MS-10W report in the February issue of Voice Coil, the Klippel data was provided from Warkwyn. In this report, I explained that the Klippel software has dropped the Kms symmetry range curve in favor of a single number Akms figure of merit. Warkwyn was using the latest update. At this point, we have not yet updated the Klippel software, so this change will not be reflected in this month’s report (this report will include the Kms symmetry range curve, as in the past), so I hope this not too confusing. (If you do not own a Klippel analyzer and would like to generate this type of data on any transducer, Redrock Acoustics can provide Klippel analysis. For more information, visit www.redrockacoustics.com).

The Bl(X) curve shown in Figure 5 is broad and reasonably symmetrical, typical of a driver with a relatively high Xmax. This also comes with a small amount of coil-in (rearward) as a small amount of “tilt” in the Bl curve. The Bl symmetry range curve provided in Figure 6 shows a fairly consistent offset throughout the operating range. Maximum offset is 1 mm, so this is likely due to just coil position and is probably within production tolerance.

Figure 7 and Figure 8 show the Kms(X) and Kms symmetry curves for the L26ROY. Like the Bl curve, the Kms stiffness of compliance curve shown in Figure 7 is also rather symmetrical, but with a small amount of coil-out (forward) offset. The Kms symmetry range curve shown in Figure 8 exhibits no more than 1.1 mm of forward offset throughout the driver’s operating range.

Displacement limiting numbers calculated by the Klippel analyzer for the L26ROY using the subwoofer criteria for Bl was XBl at 70% (Bl dropping to 70% of its maximum value) are greater than 7.4 mm for the prescribed 20% distortion level (the criterion for subwoofers). For the compliance, XC at 50% Cms minimum is also greater than 14 mm, with both numbers being greater than the physical Xmax of the L26ROY. Obviously very good performance.

Figure 9 gives the inductance curve Le(X). Motor inductance will typically increase in the rear direction from the zero rest position as the voice coil covers more of pole, however, the influence of the copper cap installed on the pole piece of the L26ROY mitigates that. It’s easy to see the benefit of the copper shorting ring with inductance only varying a maximum 0.40 mH in either direction, which is very minimal inductance change for such a large motor and certainly good inductive performance.

Generally speaking, I do not provide SPL and time domain measurements on subwoofers, as their upper range is generally not greater than 100 Hz to 200 Hz. However, in the case of the L26ROY with its two-layer voice coil, I went ahead and performed the complete SPL sequence that I normally do in a Test Bench report.

I mounted the L26ROY in a foam-filled enclosure that had a 15” × 14” baffle and then measured the device under test (DUT) using the Loudsoft FINE R+D analyzer and the GRAS 46BE microphone (courtesy of Loudsoft and GRAS Sound & Vibration) both on and off axis from 200 Hz to 20 kHz at 2 V/0.5 m normalized to 2.83 V/1 m using the cosine windowed fast Fourier transform (FFT) method.

Figure 10 shows the L26ROY’s on-axis response indicating a smoothly rising response to about 2.3 kHz followed by the 13 dB break-up mode peak at 3.6 kHz and second 7 dB mode at 6 kHz. Figure 11 displays the on- and off-axis frequency response at 0°, 15°, 30°, and 45°, showing the typical directivity for a 10” woofer with a two-layer voice coil. Given the location of the break-up mode at 3.6 kHz, an upper crossover frequency would likely be around 1.5 kHz or so, making this driver a good candidate for a three-way design. Figure 12 shows the normalized version of Figure 11. Figure 13 shows the CLIO polar plot (in 10° increments and 1/3 octave smoothing). And finally, Figure 14 displays the two-sample SPL comparisons for the L26ROY, showing a close match within less than ±1 dB throughout the operating range (up to about 5 kHz).

Next, I used the Listen, Inc. SoundCheck analyzer with AudioConnect hardware, SoundCheck 16 software, and the Soundcheck SM3 1/4” microphone (all courtesy of Listen, Inc.) to perform distortion analysis. For distortion measurements, I set the voltage level with the driver rigidly mounted in free-air and increased the voltage until it produced a 1 m SPL of 94 dB (5.9 V), which is my SPL standard for home audio drivers. I made the distortion measurement with the microphone placed near-field about 10 cm from the dust cap. This plot is shown in Figure 15.

I then used SoundCheck to get a 2.83 V/1 m impulse response for this driver and imported the data into Listen’s SoundMap Time/Frequency software. Figure 16 shows the resulting cumulative spectral decay (CSD) waterfall plot. Figure 17 shows the Wigner-Ville plot (for its better low-frequency performance).

SEAS is certainly one of the premiere high-end home audio driver manufacturers in the world, with a long history of providing excellent sounding transducers. Looking through all the data on the Extreme L26ROY two-layer voice coil subwoofer, this definitely looks like a high-performance edition to SEAS product line. For more information, visit www.seas.no VC