November 2013 was the first issue of the redesigned audioXpress in its current form, featuring several new sections, including the first of its R&D Stories series, focusing on engineering and product development - independently of the audio application field. This article by Stuart Yaniger on QSC’s Flexible Amplifier Summing Technology (FAST) was a reference for many to follow.
QSC Audio Products in Costa Mesa, CA, is a global professional sound company with a reputation for making solid, reliable gear. QSC rarely leads the market, but it always seems to fill customer needs in a cost-effective and efficient way. QSC is successful because it does things just a bit better than the first players out there. This has resulted in consistent growth and market acceptance over the years, with QSC remaining a solid competitor even against companies with significantly more resources. A survey of review sites shows extremely high customer satisfaction, with almost no negative comments and many glowing endorsements. 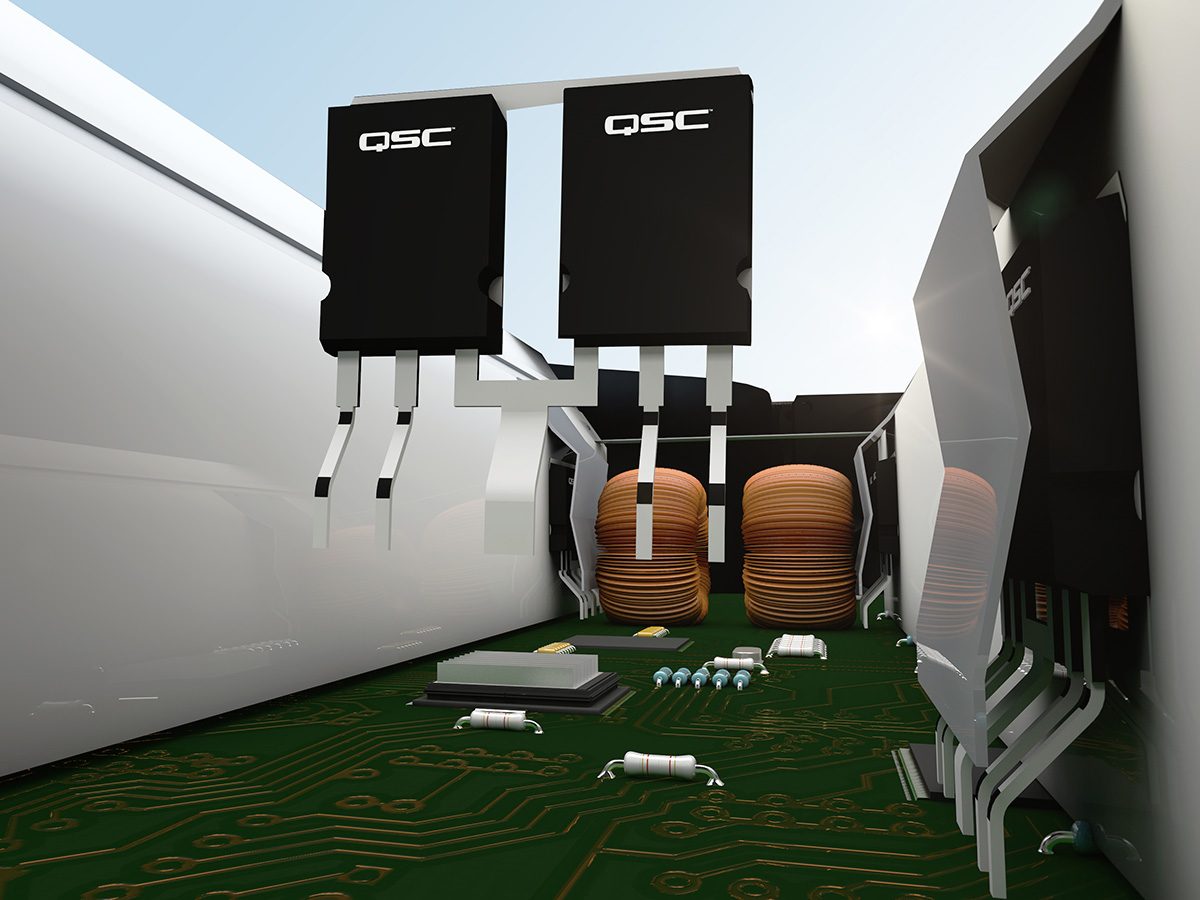 QSC’s amplification product platform is based on an approach invented by founder Pat Quilter, who has been associated with reliable and well-accepted analog amplifiers for many decades. When designing his Class-D amplifier line, Quilter used conventional circuitry and added a few twists to it. In Quilter’s circuits, an amplified version of the input signal is compared to a constant frequency triangle wave. The triangle wave is generated by a simple RC integration of the clock, which has a typical frequency of about 400 kHz. The comparator’s output then drives the gates, which control the output MOSFETs’s switching. This is all conventional but done with a particularly simple triangle wave generator.

Normally, the amplifier’s distortion performance depends on the accuracy of the sawtooth — its frequency and linearity. Quilter’s amps can use the simple triangle circuit and still realize low distortion because of two feedback loops, a traditional global loop from the output to the first stage’s inverting input, and a second loop that applies a current proportional to the switched (i.e., pre-output-filter) output voltage to the summing point of the clock voltage and the amplified analog input voltage at the comparator input. By choosing the right ratio of the three source resistances (and hence currents, with clock signal current being larger than current from the local feedback resistor), the PWM output is linearized, locking the switching frequency in synchrony with the clock. Quilter claims that this circuit trick reduces distortion of the unfiltered PWM signal by an order of magnitude, linearizing everything up to the output filter. His patent shows half- and full-bridge implementations.

A Class-D amplifier’s output is also modulated by the power supply rail for the output stage. Quilter’s patent addresses that issue as well, using a novel combination of an output-controlled regulator and rectification via an envelope detector. The combination of a tightly regulated low-noise supply and the multiple feedback loops is supposed to reduce overall amplifier distortion levels to figures comparable to analog amplifiers, but with greater simplicity and efficiency than other Class-D approaches. None of this is revolutionary, it’s evolutionary. 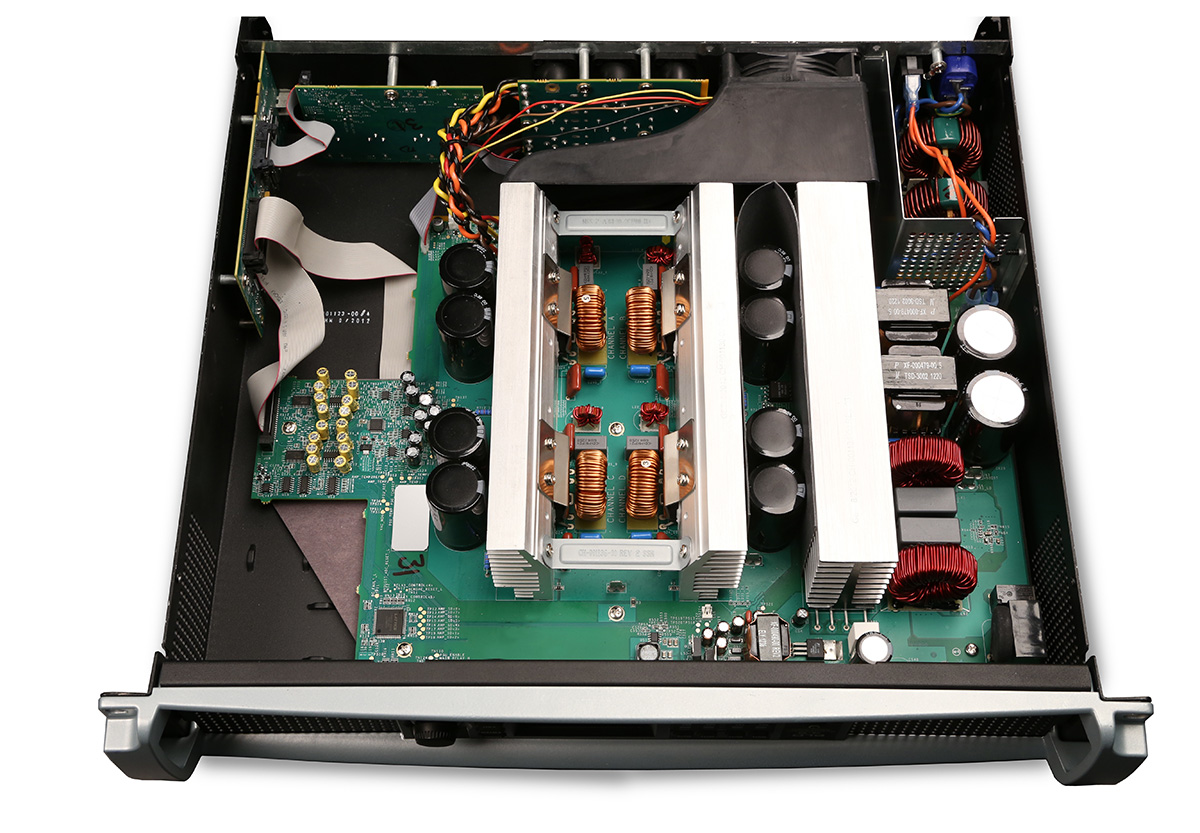 Power Trios
A perfect illustration of QSC’s “don’t worry about being first, just worry about delivering a solid take on a well-accepted technology” approach is a new pair of four-channel amplifier product lines, each line comprising three models with different power ratings (400, 625, and 1,150 W/channel into 8 ). The CXD line is intended for permanent installations (e.g., churches, conference centers, auditoriums, and public addresses). The PLD series amplifiers are essentially the same as their CXD counterparts, minus the 70- and 100-V output lines, and with standard XLR input and NL4 output connectors. The target markets for the PLD series are touring shows, DJs, and other portable applications. Both product lines have the same 2U form factor and use half-bridge outputs. 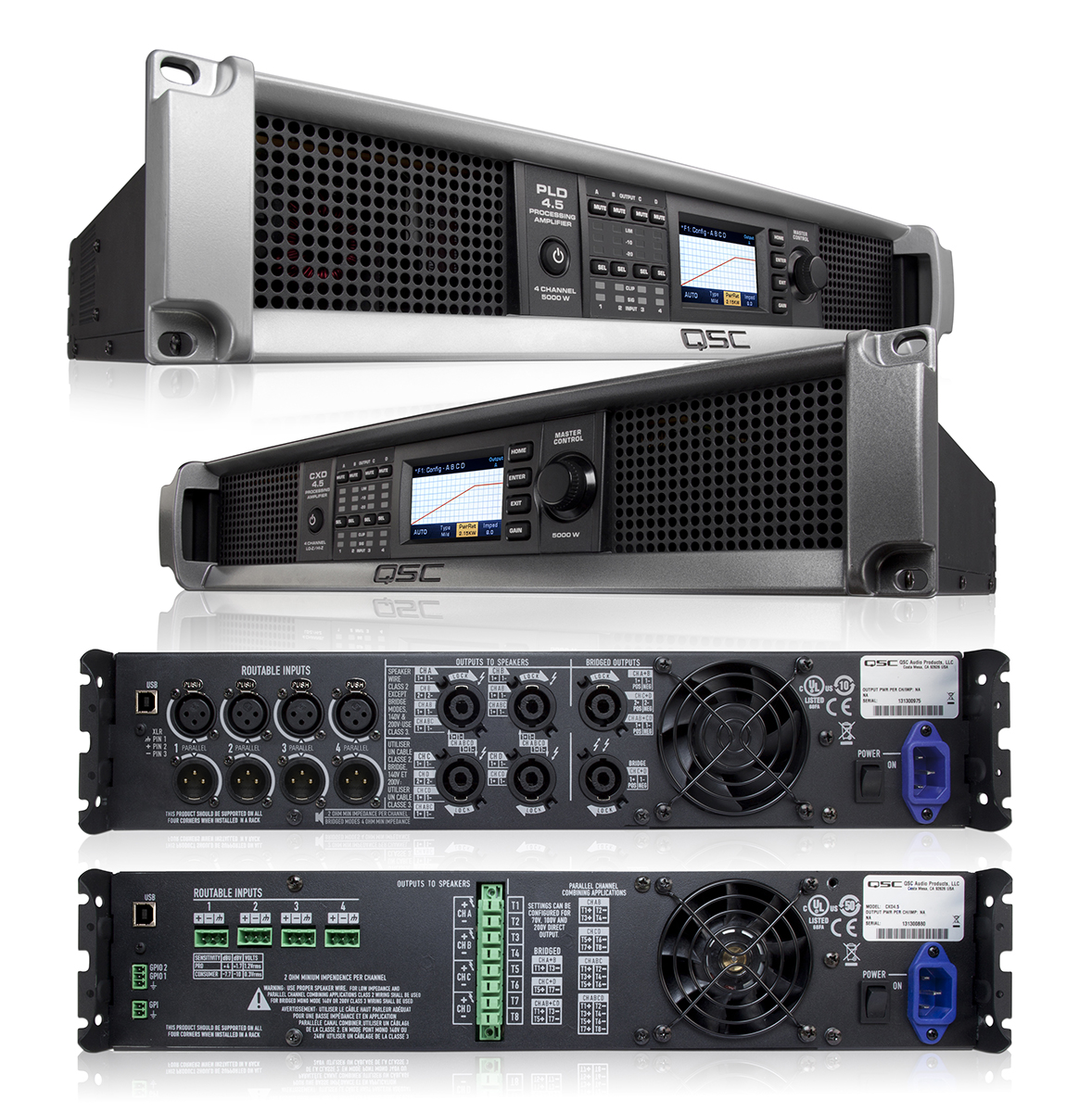 The PLD and CXD amplifiers are QSC’s first products to incorporate its proprietary Flexible Amplifier Summing Technology (FAST), a method that uses a multichannel amplifier as user-selectable sets of bridged, paralleled, or solo channels (see Photo 2). For example, a four-channel amplifier could be configured as four independent channels or as a two-channel amplifier with one side comprising two of the four channels in parallel (doubling the current capability) and the other side comprising the remaining two channels in bridge (doubling the voltage capability). It could also be used as a single amplifier with all channels in parallel, and or other permutations.