In this article series, Stuart Yaniger examines ways to create a low-cost system for lab-grade audio electronics measurements. The pieces of a powerful modern measurement system comprise a sound card, software, and a signal conditioning interface and, of course, the right computer. That’s where Yaniger delves in this third part, also sharing some of his first findings on available software. This article was originally published in audioXpress, August 2015.
In this third article of the series, we will consider the bigger part of the hardware equation: the computer itself. The options for Apple computers in audio measurement are limited. Despite Apple’s popularity for music production, nearly all the measurement software is designed for Windows computers (see Sources at the end of text for a list of available options for Windows and Mac). Over the years, I’ve used about half-a-dozen different computers with different Windows-based operating systems and have come to several conclusions.

Windows-Based Systems
XP, although commercially a dead issue, seems to be favored by people who have a good knowledge of operating systems. For those of us who don’t, it’s easy to spend hours wrestling with different menus to get the sound from where we want to generate it to where we want to measure it without molesting it too badly. As an OS, the support by different software and sound card packages is uneven. I don’t recommend it. At the moment, I have Windows 7 running on two different laptops and a desktop, and it’s been easy for even a computer novice such as me to get it to do what I want. Reputedly, Windows 8.1 operates nearly identically and is probably easier to find in a new computer. Windows 10 will be released shortly (as of the time of this writing) and it will be interesting to see if it makes the audio amateur’s experience easier or more difficult. :)

Audio Stream Input/Output (ASIO) drivers go a long way in helping you obtain top performance. They bypass the Windows layers between the sound card and the measurement software. Ensure that whatever software/hardware you use takes advantage of this!

Have a Separate Computer
A dedicated computer is a good idea. Having no interrupts or interference from wireless or antivirus or other unnecessary programs running in the background can save a lot of measurement frustration. If your computer needs to be used for other tasks, it may help to set up a dedicated boot profile which will disable any wireless or LAN adapters, and mail or antivirus programs on start-up.

If you’re using a laptop, the battery is your friend. Much effort in reducing noise and ground loops can be avoided if the computer has no connection to the mains. Get a good charge then unplug your power brick. 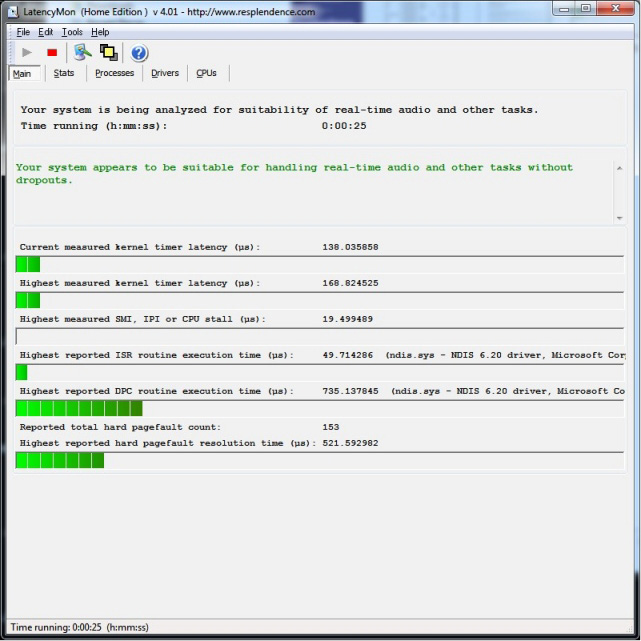 Avoid Time Delays
“Latency” is a big deal for music production. Think of it as a time delay while the computer is passing information from one place to another. That can certainly disrupt timing in overdubbing, for example. It’s a function of the computer’s speed and memory, as well as the specific software and hardware package used. It is generally not a big issue in most audio measurements, but if you have a measurement where synchronous operation is critical, you should at least be aware of it. There are various freeware latency checkers — I have been happy with LatencyMon (pictured here).

Software Options
Choice of software is likewise broad, with a wide range of trade-offs between flexibility, userfriendliness, and cost. As before, this isn’t a survey of all the available sound card-compatible software, but rather a sample of a few options that are representative of what’s out there. Full reviews of each of these could fill entire articles (and perhaps will!), but I’ll give you some brief impressions after spending some time with each of these particular packages. 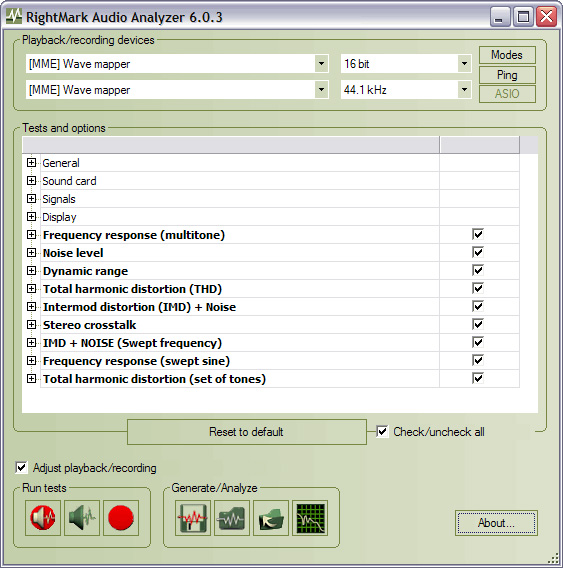 Rightmark Audio Analyzer (RMAA) is a popular freeware package, originally designed to benchmark sound card performance. It has a limited range of test signals, limited flexibility, and is not easy to customize. However, for minimal effort and expense, the user can perform a predetermined test suite—noise, total harmonic distortion (THD), intermodulation (IM), swept THD and IM, and crosstalk—in a few seconds with the press of a button. Because of its popularity, there’s lots of support on various audio and home theater forums.

RMAA freeware can be upgraded to a pro version that includes a mono mode (highly useful for those tests of circuits where only one channel is built up), variable Fast Fourier Transform (FFT) size, ASIO compatibility, and better control of display and plotting parameters. With the current favorable dollar/ruble exchange rate, the Pro version can be bought for less than $30. All in all, the freeware version is a nice choice for someone wanting to get started in audio electronics measurement. The trade-off for simplicity and ease of use is limited flexibility, and the inability to use ASIO drivers (which can lead to some wrestling with Windows MME to get good results). Any measurement of loudspeakers is pretty much off the table.

AudioTester is a much more versatile package, encompassing impedance, distortion, noise, speaker parameters, frequency response, impulse response, and spectral decay. It is easy to set up and use (though more complex than RMAA) and has good versatility. The various versions have had different degrees of bugginess, so if you’re trying to do a measurement that just won’t cooperate, you might try using a different version (the legacy versions are available on AudioTester’s website). True to Murphy’s Law, in the midst of writing this article, I updated to the latest build and it is buggier on my system than the previous version, making data acquisition a real chore. No doubt this will be fixed in the next build, but it can be frustrating. My advice is that if you get it working well, don’t be tempted to update! When it works, though, it works well, and the low price (about $47 at the time of this writing) is certainly attractive!

ARTA is probably the gold standard for measurement software packages, and seems to be the most popular option. It is actually a bundle of three programs: ARTA, which is an FFT-based spectrum analyzer; STEPS, which as the name implies uses frequency-stepped sine waves to perform measurements; and LIMP, which is a package directed toward loudspeaker measurement and has capabilities for impedance, frequency response, impulse response, and polar pattern. It’s quite a bit more expensive than AudioTester (about $90 at the time of this writing), but I haven’t actually screamed at my computer when using it. It only took an hour or two to figure out the features I needed for my basic measurements, and it has run smoothly thereafter. Given the large base of satisfied users, it’s hard to go wrong with this choice.

Virtins Multi-Instrument sports an amazing range of capabilities. Of all the software packages I tried for this article, it has the most features, the widest capability, the greatest flexibility, and the steepest learning curve. It is configured as a group of virtual instruments (thus the name), including a signal generator, a spectrum analyzer, a digital
oscilloscope, and a multimeter. Add-on modules include a data logger and a LCR meter, as well as 3-D graphing capability. One of the interesting features is the library of windowing functions (which I will discuss in next month’s article) in .wav format so that you can customize or add your own window if you’re so inclined. In the month or so that I’ve had the Virtins package, I don’t think I’ve exploited even a tenth of its capability. The price for the standard edition is about the same as ARTA ($99.95). It is a tough choice but I bet that a year from now, after I’ve gotten a greater comfort level, this will be my go-to choice for software.

All of these general measurement packages (except RMAA) are capable of measuring both electronics and loudspeakers. Some might prefer software dedicated to loudspeaker measurement, so I’ll mention a couple of those. For speaker and room measurement freeware, the outstanding examples are Room Equalization Wizard (REW) and HOLM Impulse.

REW is a remarkable piece of software, with acoustic measurement capability that includes (besides the usual frequency response and impedance) waterfall plots, spectrograms, polar plots, real-time analysis, SPL metering with selectable weighting, equalization, distortion, phase measurement and unwrapping. Basically, it has everything you need to perform comprehensive loudspeaker and room acoustics measurements. There is an active support forum available to help you past the rough patches and assist you in getting the most out of this remarkable software. Did I mention that REW is free? 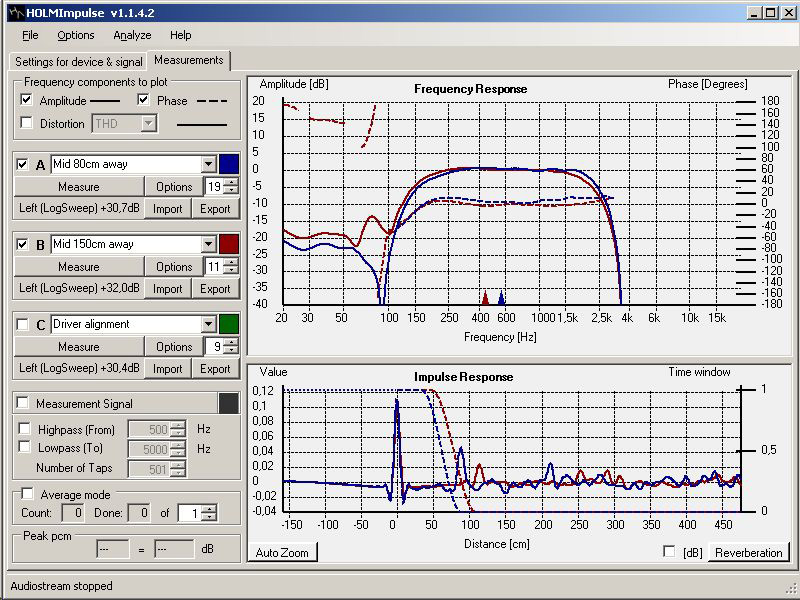 HOLM Impulse is a nifty piece of speaker measurement freeware capable of measuring frequency response using frequency swept sin waves, chirp signals (basically a sine wave with a rapid change in frequency), or MLS (a method equivalent to impulse response, but with better signal-to-noise ratio). While not as versatile as REW, it is exceptionally easy to set up and use. If I were approaching speaker measurement for the first time, I’d start here, then move on to a more sophisticated package as my needs and abilities warranted.

Anyone who wants to obtain and sensibly interpret useful loudspeaker measurements is strongly urged to read Joe D’Appolito’s superb book Testing Loudspeakers (Audio Amateur Press, 1998). An overview was given a few years ago in audioXpress and is available online. Likewise, Texas Instruments has helpfully outlined the basics of speaker measurement, featuring REW, and this review is also available free online.

Exporting Data
Most of the software packages enable users to export the data into a .txt file, suitable for importing into spreadsheet programs (e.g., Excel). Once the data are in Excel, you have a lot of flexibility in manipulating and graphing them. As an example, an interesting way of plotting impedance data is the Heyser plot. Heyser plots were a regular feature in speaker reviews in the late, lamented Audio magazine (examples are shown in figures 2 and 3 of the review reprint, see Resources), and I wish that other reviewers had continued this useful tradition.

The impedance, usually of a loudspeaker, comprises a real (resistive) and imaginary (reactive) part. If you plot the points of a frequency sweep on the complex impedance plane (resistance along the x axis, reactance along the y axis), you get a series of loops, each representing a resonance. In a Heyser plot, the large loops represent fundamental resonances (e.g., the bass resonances and crossover resonances). The small loops generally arise from things such as panel resonances, resonances in cavities inside cabinets, acoustic reflections, and flexure of cones. It’s a nice way of visualizing impedance data, and Excel will allow you to use your acquired data to do this with just a few minutes of spreadsheet manipulation.

After acquiring the complex impedance data, exporting to Excel, and plotting on the complex plane, I made Heyser plots for a woofer test (see Figure 1). The woofer in this example came from an NHT Super Zero loudspeaker and was mounted in a sealed cardboard test box. The large loop in this plot is the bass resonance (Fc) and the little pigtail loop results from the flexure of the cardboard. Figure 2 shows the test setup I used to acquire the complex impedance data. Photo 1 shows the actual M-Audio 192 PCI Sound Card. I’ll go into more detail about how to set up and perform these measurements in a later article of this series.

In my next installment, I’ll discuss the interface between the sound card and the device or system being tested. ax 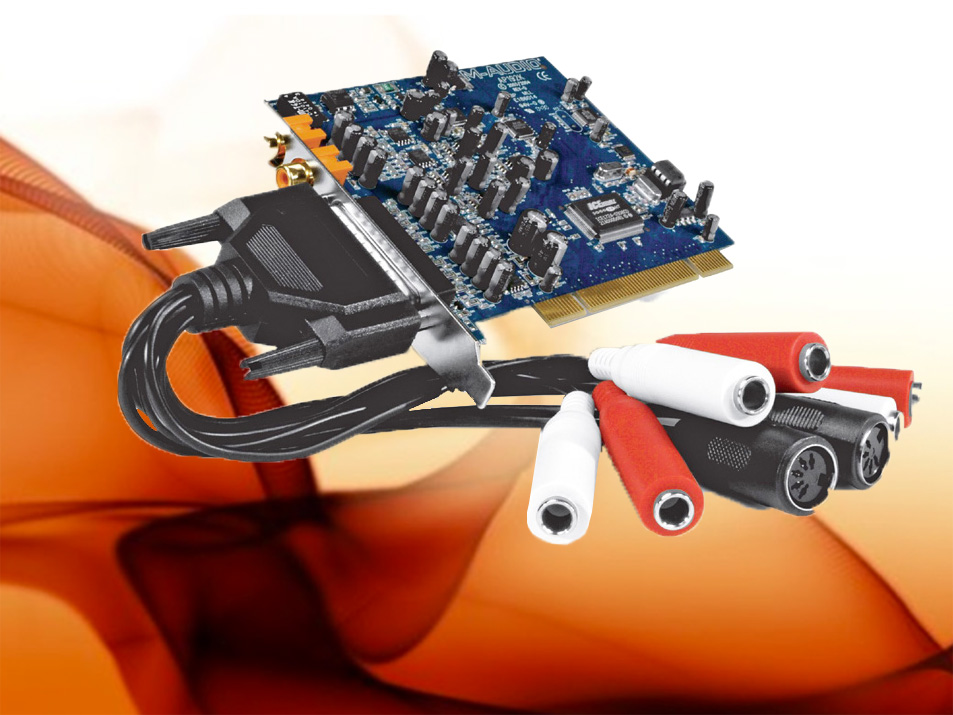 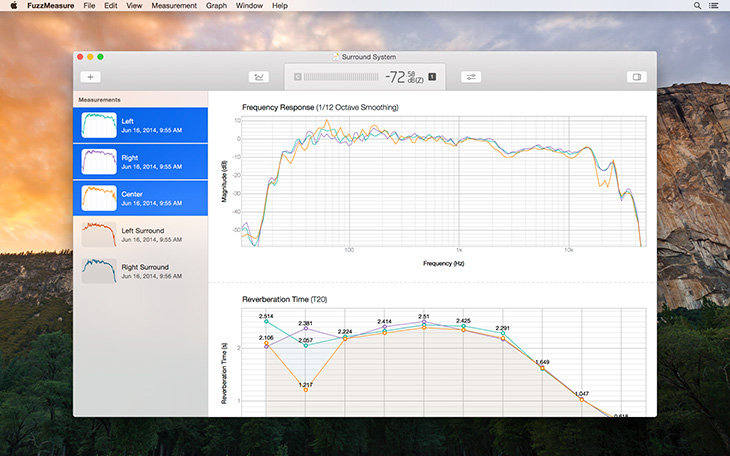 This article was originally published in audioXpress, August 2015.