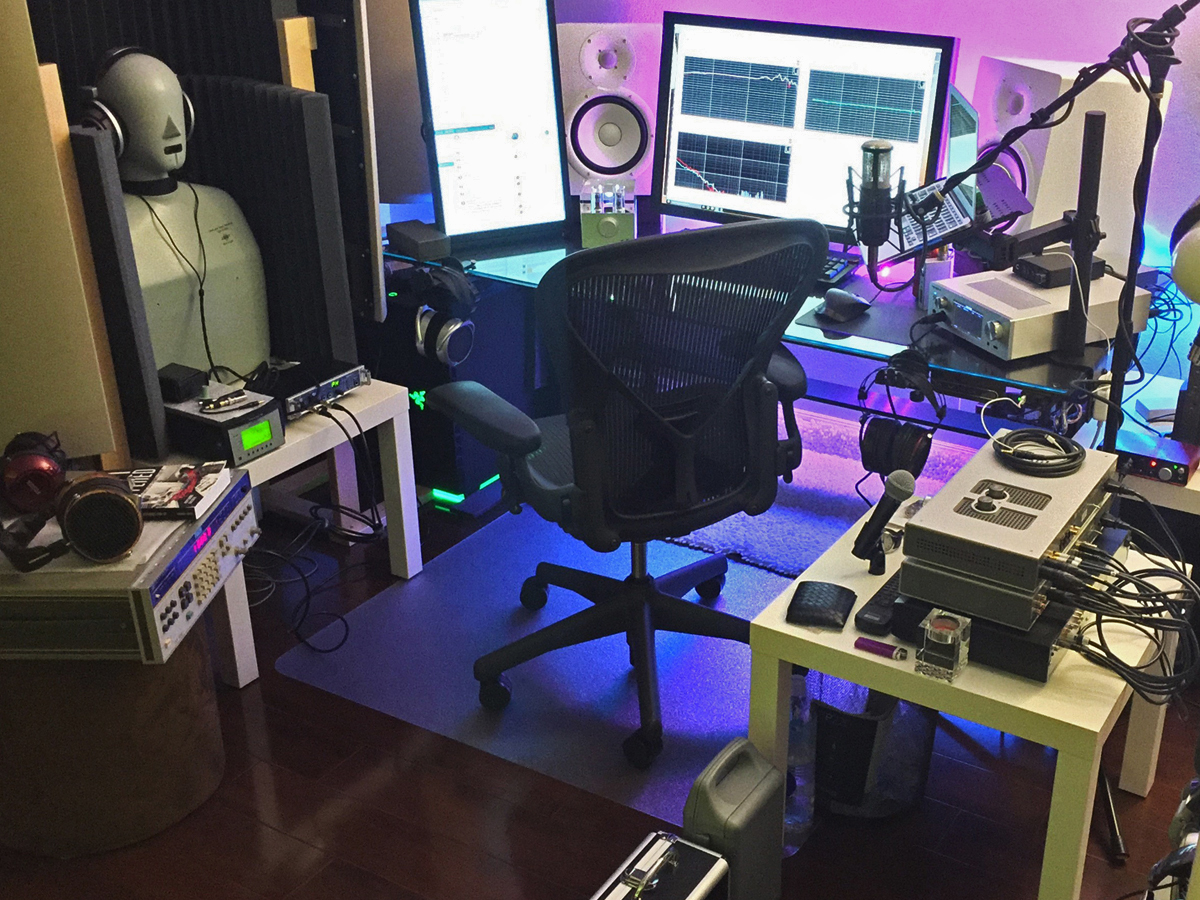 Closed Loop and Open Loop Testing
To begin, let’s define what we mean by open and closed loop testing. The test configuration for conventional headphone measurements, as seen in Figure 1, is what we term a “closed loop measurement.” This traditional type of audio measurement has been done for years with all types of transducers (e.g., loudspeakers, headphones, microphones, etc.), and audio measurement systems can make these measurements without problems. The test signal passes from the audio interface through the speaker/headphone where it is converted to sound pressure. Then, it goes through the microphone where it is converted back to voltage for analysis. The entire path from input to output is on the same interface, usually in the same domain (analog), and most critically, the analysis system’s input and output sample rate are perfectly synchronous. The entire measurement from signal generation to capture of the device response simultaneously occurs with just a small amount of input to output delay added by the speed of sound.

In headphones with Bluetooth, Lightning, or other unconventional digital audio interfaces, this loop is broken. The input and output are on two different physical devices, which do not share a sample clock, and the signal goes through one or more analog to digital conversion stages. The delay from input to output of the device is likely quite long, compared to classic analog headphones. In fact, the delay might effectively be infinite. In the case of Lightning-connected headphones, there is currently no third-party solution available for injecting a test stimulus into a Lightning port. In Bluetooth systems, the connection is intrinsically nonsynchronous.

However, SoundCheck makes it possible to measure all conventional parameters of a device, even when those devices are open loop devices, with a variety of tools including:
• Triggered acquisition—support for capturing measurements on playback devices
• File analysis—the ability to analyze signals captured by recording devices
• Resampling—conventional asynchronous sample rate conversion
• Frequency shift—the capability to align signals between non-synchronous systems

Let’s explore how these tools are applied in some typical test scenarios.

Bluetooth Testing
Figure 2 shows a typical Bluetooth setup. Since we are testing the Bluetooth headset using a Bluetooth interface, it is nominally a closed loop scenario. The audio signal comes out of the analog interface and is transmitted via the Bluetooth interface to the headset. It is then played by the headset and picked up by the ear couplers where it is returned to the analog interface and computer for analysis. However, what makes this an open loop test is that Bluetooth does not transmit a sample clock and, therefore, the receiver and transmitter are asynchronous.

When compared to a conventional test, only two changes need to be made. First, a short, stationary tone is pre-pended to the stimulus signal (see the Sidebar article). Typically 1 kHz for as little as 250 ms, this signal provides the frequency reference that the frequency shift step needs to align the stimulus and response signals in an asynchronous test scenario. Second, a post-processing, frequency shift step is inserted into the test sequence between the acquisition and analysis step.

The rest of the sequence is identical to a conventional headphone test sequence and all normal parameters including frequency response, THD, polarity, rub and buzz, and so forth can be measured.

Lightning Headphone Testing
Any device that does not provide an analog or digital input and output is intrinsically an “open loop” device from a test perspective. Headphones that use the Apple Lightning port for connection are considered open loop because Apple does not provide Lightning audio output adapters. The only device that can currently play audio into a Lightning headset is an iPhone. Measuring Lightning headphones requires an iPhone or similar Apple device to be used to store and play back the test signal (see Figure 3). This creates several open loop testing challenges. To test a Lightning connected headphone, we will use three specific tools: triggered acquisition, resampling, and frequency shift.

Again, our test sequence will use a short 1 kHz tone, pre-pended to the normal test stimulus but this time it serves two purposes. First, it triggers a record-only acquisition, so that the test is automatically triggered when playback of the test signal begins. It is also used as the reference tone for frequency shift. Also, if our playback device, the iPhone, is using a different sample rate to the audio interface, we may need to use a resampling step. Finally, frequency shift will again be used to synchronize the stimulus and response waveforms. After the response waveform is captured via a triggered acquisition step and has been resampled and frequency corrected, calculation of the desired measurement parameters can proceed as with any conventional headphone.

Pre-written test sequences for both Bluetooth and Lightning headphones are available at no charge from Listen’s website.

Lightning Headphone Microphone Measurements
Since most headphones now also include a microphone, it is worth mentioning how the microphone on a Lightning-connected headset is tested. The test sequence and method for this is a little more complex, although ultimately it is really just the converse of testing the earphones. Figure 4 shows a typical test configuration.

The preparation of the test signal and the use of resampling and frequency shift steps are identical to testing the earphones of a Lightning connected headset. The difference is that instead of playing back the stimulus through the earphones and using a triggered, record-only acquisition, the stimulus is instead generated using a calibrated speaker or mouth simulator and recorded on an iPhone. The recorded signal is then transferred back to the computer hosting SoundCheck and analyzed using a recall step to import the waveform into memory from storage on the iPhone.

Conclusions
Bluetooth and Lightning interfaces add an additional level of complexity to testing that is not there with their analog counterparts. However, because the SoundCheck test system is completely agnostic about where the stimulus and the response waveform are generated and captured, these tests can be carried out with relatively simple modifications to existing test sequences. In fact, it pretty much comes down to a simple modification to the stimulus signal and some additional post-processing steps prior to analysis—all of which are easily automated.

This article was originally published in Voice Coil, July 2017.
Next page 1/2
related items