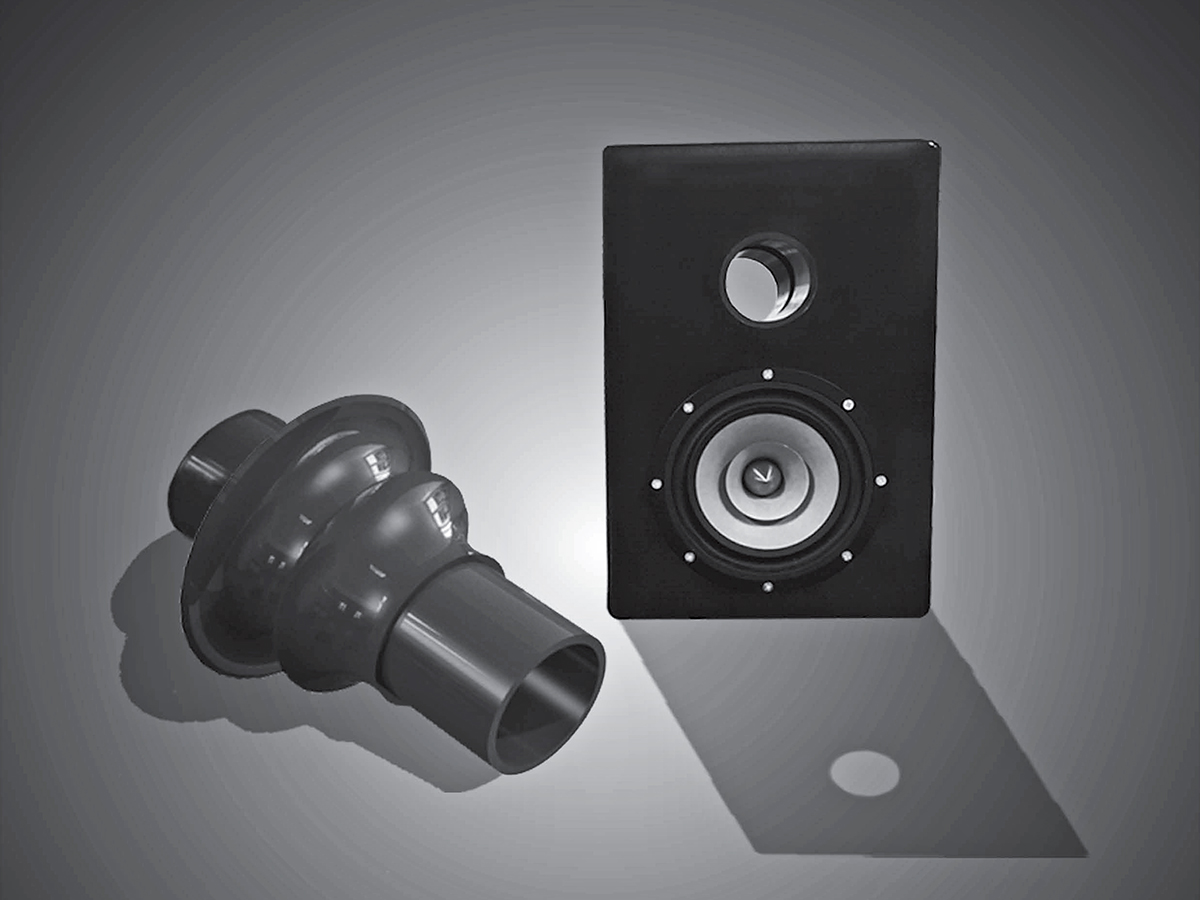 The Technology
The Stratified Stream Port technology developed by Quest Engines allows for visually appealing see-through ports (see Photo 1), while providing improved performance when compared with traditional vented enclosure ports. The newly invented port technology allows a clear and unobstructed line of sight from the front of the box to its rear as detailed in the patent drawing shown in Figure 1. It also provides dynamic full-range sound from what appears to be an empty space.

This varying path length in the initial, versus subsequent travel, allows the port to produce multiple frequencies efficiently while remaining in phase. It also enables design parameters to be tuned by adjusting the individual pipe lengths, pipe length ratios, overall port length, and wave guide parameters.

The swirling focusing action of the system allows high velocity pressure wave movement, as can be observed in finite element analysis (FEA) simulation depicted in Figure 3. The blue areas represent low relative velocity areas, while the red areas represent high relative velocity areas. Due to the focusing and phasing action within the system, these high velocities do not create chuffing, boom, or muddiness in the sounds produced. These combined effects also reduce the frequency-dependent loading of the system.

Testing
While computer-based simulations provide a good starting point and allow for a snapshot system analysis, functional prototypes always provide more meaningful test data. So, a test platform was designed (see Photo 2), which allowed the same driver and enclosure to be reconfigured as an open back, sealed, traditional vented bass-reflex port, and Stratified Stream Port enclosures. The test speaker system employed an aligned 3.5” hole in both the front and rear panels located above the driver.

The enclosure does not utilize any fill or other acoustic treatments. The traditional vented port and the Stratified Stream Port used a pipe with an inside diameter of 3.042”. The traditional vented port used a length of 3.225” pipe. The Stratified Stream Port had an overall outside length of 7.875” with the injection point located approximately midway between the enclosure front and back panels.

In terms of the test equipment used for this analysis, a new USB Scarlet Solo was verified to have a flat frequency response within ±1 dB. It was used without signal processing for test signal generation with several Windows 10 applications, including Arta, OmniMic, and Audacity. The line level output from the Scarlet Solo was set to 75% and connected to a new QSC GX3 amplifier with the volume set below one-quarter. Test signal responses were recorded with a new calibrated Dayton OmniMic. A consistent volume was determined to avoid clipping during testing and was consistently used for all tests. A new calibrated USB Dayton DATs unit was used for all the electrical testing of the system.

The test enclosure has an internal volume of approximately 0.79 ft3. The test system employed an 8” full-range Tang Band W8-1772 driver. The same serial number driver and the same enclosure were used for all tests. No passive compensation or crossovers were used, meaning that the driver is directly electrically connected to the terminals on the outside of the cabinet. The wave guides for the Stratified Stream Port were manufactured using FDM 3D printing.

It is interesting to observe that the front and rear of the Stratified Stream Port respond differently due to the shaping and directional behavior of the wave guides. This difference was audible during musical testing, but provided a pleasant difference that can widen the sound stage when used as a normal stereo speaker set and placed near an appropriate surface, such as a wall. It should also be noted that this trait also provides a wide and enjoyable area sound experience when used further from a boundary.

While it seems counter-intuitive, the directional nature of the pressure waves does indeed produce a slightly different response at each port face, while the pipe appears to be one continuous structure when observed from the outside. We further investigated this directionality by taking additional measurements at the center of the tube length from the front and rear port sides (mic located on the tube inside center entry area pointing toward the rear port and pointing toward the front port.

Conclusion
It should be stated that the Stratified Stream Port system is a different way to achieve the goal of quality sound reproduction, while offering several different aesthetics and options. The stunning visual aesthetic of see-through ports, which produce sound that appears to come from nowhere, plus our listening test that indicate a clear preference over standard port technology in terms of subjective sound quality, make the Stratified Stream Port a compelling alternative that offers something no other current port technology can provide. Quest Engines, LLC will, on request, arrange listening test so your company can observe these phenomena for yourselves.