Considering that China is, at least for now and the near future, the center of global speaker manufacturing, you should not be surprised that a strong infrastructure for production testing has developed. But it does not have much of a profile outside of Asia, which is one of the reasons why ISEAT became an invaluable event.

While the usual Western companies are well known by our readers and lead the pack for acoustic lab testing, the special class of automatic end-of-line test gear, such as for the mic and speaker sub-system, test of smartphones, headphones, tablets and laptops, have evolved predominately in China but are not a common sight in the West. That's why a brief tour of the exhibits at the recent ISEAT held November 9-10 in South China is is always interesting. 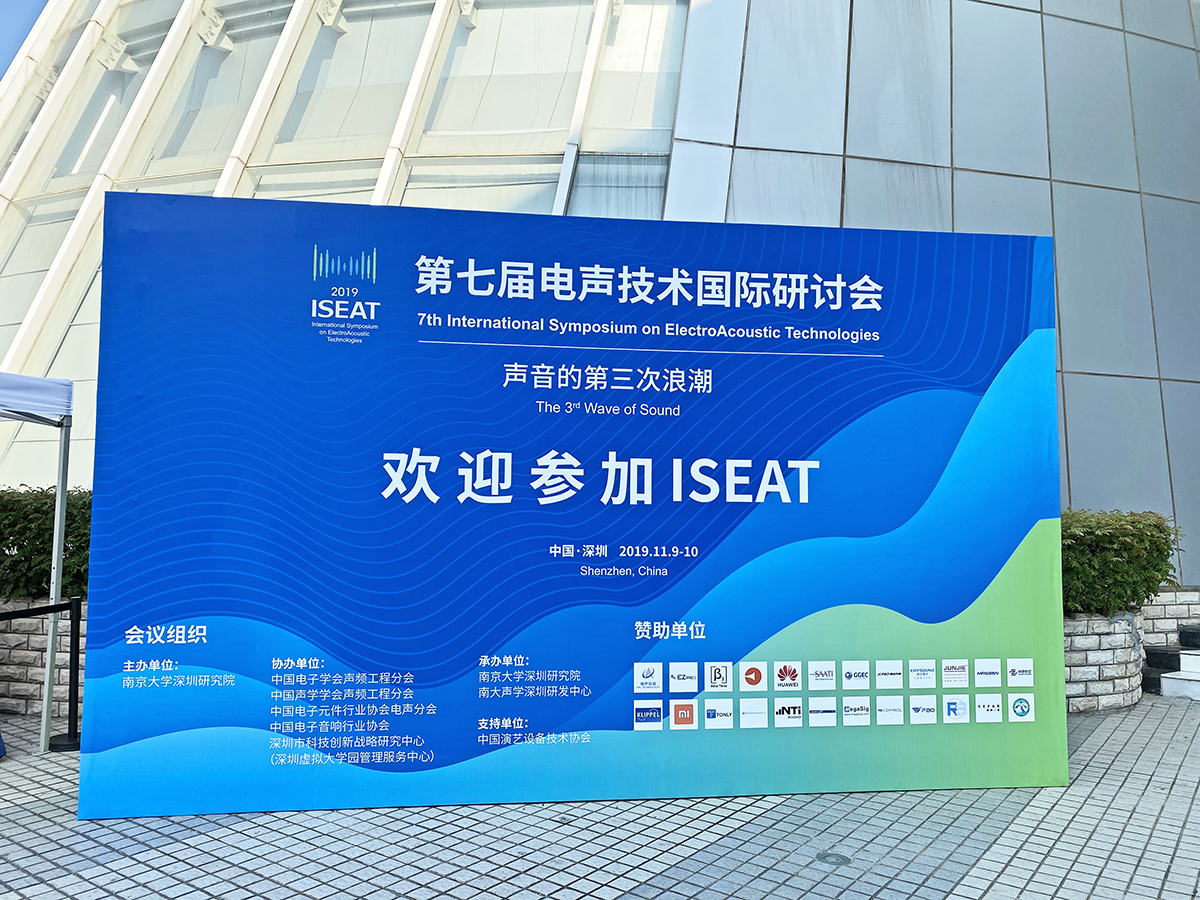 The theme of ISEAT 2019 was the challenge of the Third Wave of Sound. It is a window for Chinese people to understand the world's acoustic frontier technology. It is also a bridge connecting academic and business circles. It will help China win in the third wave of sound. "Humans have experienced three waves of sound so far. The new technology has already arrived, and whoever can accurately grasp the third wave will open the door to wealth in the new era. I hope that the Chinese acoustic academia and business community can work together to seize this historic and significant opportunity," Prof. Shen Yong states.

Detailing a little about this "Third Wave of Sound" topic, Prof. Shen Yong explains that in the first wave of sound, the Chinese acousticians were very advanced and were responsible for the 12-tone equal temperament used in the tuning of musical instruments research and first proposed by the Chinese Ming Dynasty acoustician Zhu Zaiyu. "Unfortunately, the Chinese did not understand the results of Zhu Zaijun's research."

"The second wave of sound occurred between 1862 and 1877, when a few landmark events occurred in Europe and America." According to Prof. Shen Yong, these followed the publication of landmark works by Helmholtz (Germany) and Rayleigh (United Kingdom), the telephone patent applied by Bell, and Edison's invention of the phonograph.

"The third wave of sound is going on at the moment," Prof. Shen Yong says. "143 years ago, Europe and the United States successfully grasped the great opportunity brought about by the second wave of sound, and created a new era of technology, and benefited from it. Now, the third wave of sound has arrived, and the countries of the world have once again returned to the starting line. Who will grasp this new and significant historical opportunity?" And he concludes, "ISEAT 2019 is just around the corner. It is a window for Chinese people to understand the world's acoustic frontier technology. It is also a bridge connecting academic and business circles. It will help China win in the third wave of sound."

My translation of this - there is always a gap between the scientists in the universities and the product developers with a budget, limited risk assessment, and time-to-market constraints. Getting everyone to talk to each other is the challenge. For me this sounds familiar - hey I have this enviable job!

I would also say that, as much or more than any other audio event, ISEAT contributes to this mixing pot of the visionaries to the production engineers and the inhabitants' in-between.
Presentations from leading audio experts, many whom our readers will recognize, included Wolfgang Klippel (Klippel), Steve Temme (Listen), Sean Olive (Harman), Peter Larsen (Loudsoft), Richard Little (Goertek), Ken Forsythe (EAW), Mark Dodd (Celestion), Gregor Schmidle (NTi Audio), and just about all of the Chinese leading experts of speaker engineering.

Some of the titans of mic elements and microspeakers had large booths, their presence at ISEAT as much for reaching customers as for harvesting recently graduated engineers. AAC Technologies, Shenzhen Horn, Mingseng, GGEC, but also new boutique guys such as VM-sound, whose focus is upscale microspeakers. Another exhibitor was TCL Tonly, which has become a major OEM/ODM force in headphones, Bluetooth speakers, smart speakers, as well as a leading brand in TVs and other consumer electronics. Recently, TCL acquired the Philips brand and you can expect to see TCL continue to strengthen its brand position in the West. After ISEAT, I enjoyed a tour of TCL ' s awesome industrial park and will provide a report for Voice Coil Magazine.

On the smartphone front, Huawei and Xiaomi were exhibiting and recruiting. And the major acoustic mesh companies, Saati from Italy and Swiss Sefar, were present in force. If you design the mic section for smartphones, headphone drivers, and specify acoustic resistance mesh then you know that mesh variations typically will account for more than any other variable. The Chinese audio industry has learned that if you want precision acoustic resistance mesh, you really have only two choices, Saati and Sefar.

The Western acoustic simulation and test contingent was well represented and for sure our readers know these established test instrument brands.
Klippel was showing its Analyzer System for both R&D applications and end-of-line testing. Most exciting is the introduction of the Klippel Controlled Sound Technology, a game-changing speaker correction system. As in previous editions, Wolfgang Klippel also gave a talk during the seminar program.
NTi Audio displayed its main audio test instrument product lines featuring the handheld XL2 Audio and Acoustic Analyzer and the desktop/rack-mount FLEXUS FX100 Audio Analyzer. NTi Audio's Product Manager Gregor Schmidle attended this edition of ISEAT and presented the company's approach to testing voice control systems and specifically digital microelectromechanical systems (MEMS) microphone arrays. NTi Audio's Microphone Test System enables users to measure the quality of each of the digital MEMS microphones as well as that of the microphone array as a whole in a quick and reliable way. At the core of the Microphone Test System is the FX100 Audio Analyzer, which connects to the microphones through the NTi Audio MEMS Mic Interface Box. Up to eight digital MEMS microphones can be assessed with configurable clock frequencies and operating voltages.

S&V Samford - the agents for GRAS Sound & Vibration, Listen (SoundCheck), and another dozen or so related electro-acoustic test brands - was another sponsor and exhibitor. At the S&V booth, GRAS showed its portfolio of ear simulators and couplers, acoustic test fixtures and the familiar KEMAR. The highlight was the company's new Hi-Res Ear Simulator, the GRAS RA0403/04, based on the standardized IEC 60318-4 Ear Simulator, but modified to improve its high-frequency response. The company's CTO, Peter Wulf-Andersen presented the new solutions, with a special focus on the wide-band high-resolution ear simulator.
Listen demonstrated the latest abilities of its SoundCheck audio test system and associated hardware for testing a range of audio devices including smart speakers, headphones and smart hearables, automotive audio, microspeakers, microphones, smartphones, tablets and more. Listen's founder, Steve Temme, presented a paper on "The Challenges of Testing Voice Controlled Audio Systems." In this paper, he highlighted the common factors in testing smart speakers, hearables, and automotive infotainment systems (e.g., open loop testing, measuring speech recognition), and testing in the presence of background noise, and explained how to correctly measure such devices. He discussed how their numerous connections from wired to wireless and the included signal processing, both on the record and on the playback side make them complex to test as their characteristics change according to real-world conditions of the environment that they are used in (e.g., background noise, playback levels, and room acoustics). A complete article based on this presentation is featured in the January 2020 edition of audioXpress. Recommended reading.

Loudsoft is perhaps the dominant provider of design software for the loudspeaker industry, and Peter Larsen was showing the latest enhancements to his FINE series simulation software. One really neat trick and (invaluable) function Peter just worked in was the ability to drag and adjust the cone or surround shape with a mouse and observe what your change did to performance. The FINE QC test system is also now gaining a lot of traction for fast and accurate end-of-line production while the FINE R+D lab system now can measure to 100 kHz.
Shenzhen MegaSig Measurement & Control Technology Co., Ltd. is a major Chinese sound and vibration test and measurement solutions company, located in the Chinese Silicon Valley of Shenzhen Nanshan. MegaSig's automated acoustic test systems are really impressive. During ISEAT 2019, MegaSig exhibited its AudioExpert, modular hardware PM series and U series, and a series of acoustic sensors. This platform is targeted for mass production quality control of smartphones, Bluetooth headsets, smart speakers, and more. MegaSig is also a local National Instruments (NI) partner and many of the company's solutions use NI interfaces and software. After ISEAT, I spent a week visiting various factories and had the chance to see MegaSig's automated end-of-line two-headphones-at-a-time test system in action - it picks up the headphones, dunks them into an isolation box, does the pass/fail test, and plucks them out before moving on to the next group.

Among the new products presented at ISEAT 2019 by CRY Sound there was a new "parallel" four Bluetooth headset audio test system. In the recent years of continuous development of Bluetooth testing, dual Bluetooth testing has become a standard and is favored for its higher equipment and staff efficiency. The four Bluetooth test system is an extreme upgrade to dual Bluetooth, with minimal hardware changes in exchange for maximum efficiency breakthroughs. From dual Bluetooth to "four Bluetooth," the test efficiency is doubled, and the units per hour (UPH) of a single device can reach 400. Test products cover Bluetooth PCBA, Bluetooth semi-finished products, and Bluetooth products. Recent CRY Sound test instruments and capabilities introductions also include Lightning and USB-C test, as well as ANC automatic calibration and test.  Other solutions included the CRY2304/2308 noise and vibration analysis system (4 and 8 channel versions). The frequency range is 10Hz~80 kHz, and the noise floor is as low as -110 dBV.
And RSTech may be new to our readers but the company was founded in 2006, has branches in six different Chinese cities, and offers complete electroacoustic test systems, including all the accouterments from artificial ears to artificial mouths, measurement mics, and more.

Between the always busy sessions, lunch break was at Yoshinoya, a beef bowl Japanese restaurant chain which I think many of our readers may have tried as they are popular in the U.S. and Japan as well as China. The dinner was a really nice buffet with a diverse range of food from Beijing duck to fish to fruit not to mention free flowing white and red wine. No one looked hungry toward the end of the banquet.

This was a dynamic event with participation from many exhibitors, international experts - both from research and universities to engineering development teams - all mixing together to form " The Third Wave." ISEAT 2021, in almost two years, promises to be a major event for the loudspeaker industry, and you do not have an excuse not to plan on attending! aX

Is Direct to Consumer the Future for Hearing Aids?