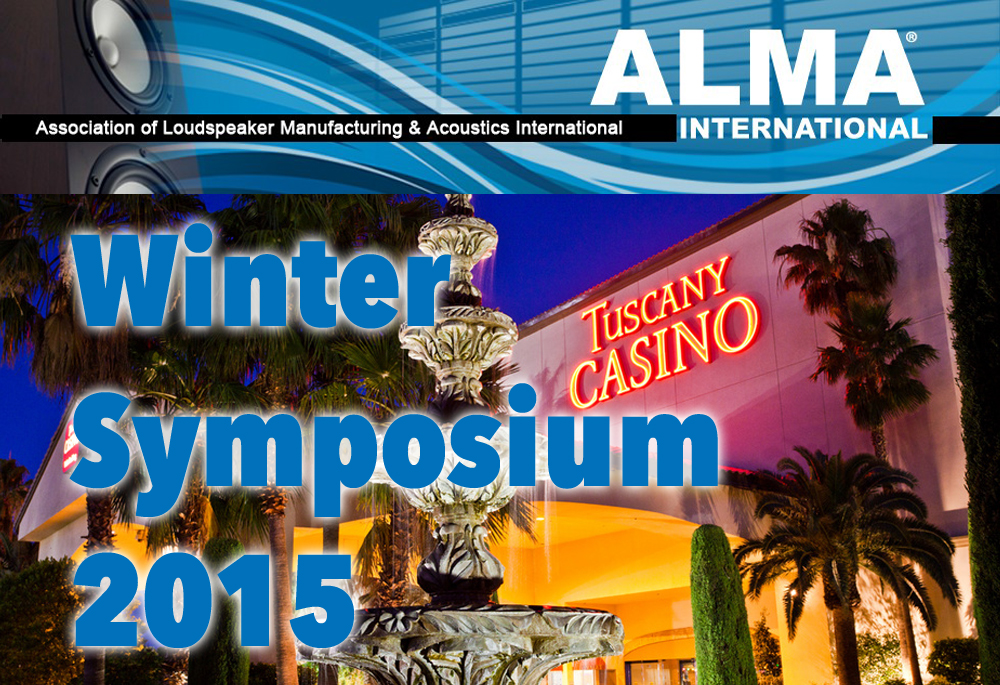 For those who have attended past Winter Symposiums, it’s important to note that this year’s edition will be a larger and more industry encompassing Winter Symposium experience. ALMA International is the only association in the world that holds an annual loudspeaker specific event for professional buyers, sellers, engineers, product planners, sales and marketing people, and management. Everything related to the loudspeaker industry in one single place and all in two jam packed days and plenty of networking opportunities.

For 2015, ALMA International’s Winter Symposium theme is “Digitally Driven Loudspeakers: A New Paradigm Demands New Designs.” There will be two focus areas. The Business Track has content for business owners, marketers, product developers, and sales professionals. The Technical Track contains the engineering and technical content for which ALMA is famous.

There will be a seminar on speaker science focused on what makes a speaker work, what are specs and how to use them, as well as a  panel discussion by the various groups involved in establishing standards and measures for the loudspeaker industry. “Is it possible to agree on a common standard?”

The added Business Tracks will give CEOs and sales and marketing professionals a good reason to get to Las Vegas the weekend before the International CES. There will also be a panel discussion by industry experts about the pros and cons of manufacturing drivers here or sourcing elsewhere, and “skills they didn’t teach in school” for engineers and designers.

Laurie Fincham will deliver the Keynote Address at ALMA International Winter Symposium Gala Baunquet on Saturday evening. As Senior Vice President of Audio Research and Development at THX Ltd., Laurie Fincham manages all audio direction and research for the company, in addition to designing and developing new audio technologies. Fincham introduced Steerable Line Array technology in early 2011, which garnered significant attention from the industry for its innovation, unique design and variety of applications. With more than 13 years at THX, Fincham continues to pursue a lifetime passion for designing speaker systems and associated electronics.
Fincham has spent most of his working career in audio engineering, specializing in the theory and design of loudspeakers. He has designed drivers and systems for professional, domestic and musical instrument applications. Prior to THX, he worked for Celestion, Goodmans Loudspeakers and KEF Electronics in the United Kingdom before moving to the United States to work for Infinity Systems. In 1971, while at KEF Electronics, Fincham co-developed the first FFT based measurement system for stationary signal analysis.
Throughout his career, Fincham has received numerous honors and accolades including Lifetime Achievement awards from HiFi News and ALMA, The International Loudspeaker Association; he was also inducted into Home Cinema Choice’s Hall of Fame. Fincham is a life fellow of the Audio Engineering Society (AES) and a current member of the Acoustical Society of America. He has held several positions in numerous industry organizations, including chairman of the British Section, and governor and vice president international of the AES.
Fincham holds a Bachelor of Science Degree in Electrical Engineering from the University of Bristol, United Kingdom. 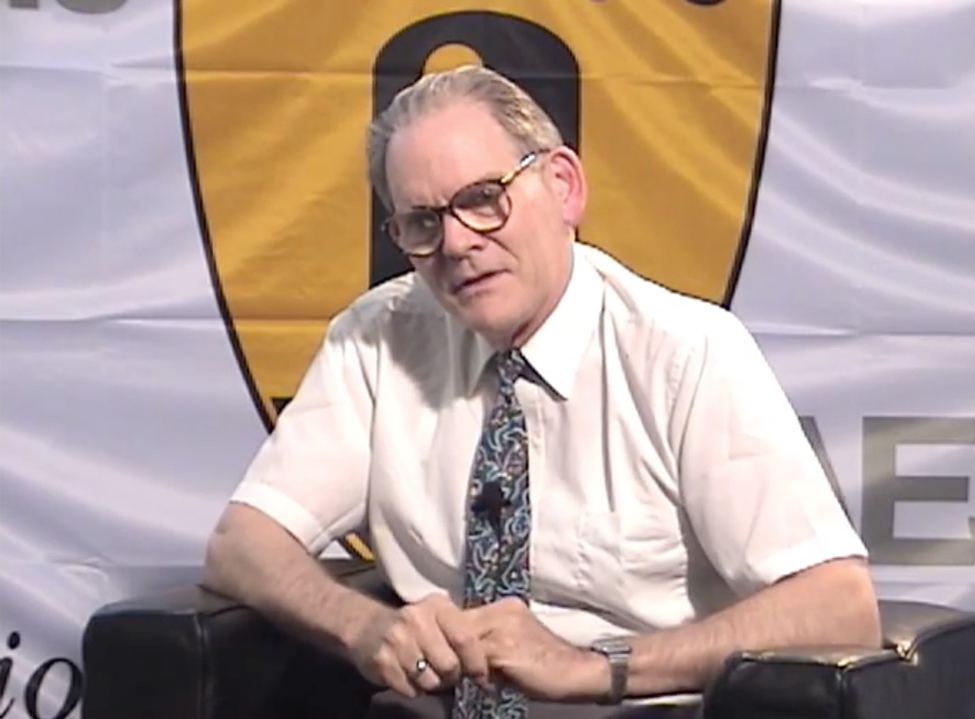 The Beryllium Driver Lifetime Achievement Award which recognizes significant and sustained contributions to the loudspeaker industry over the lifetime of a career will be presented to Dr. Richard Small.
Richard Small’s experience in electronic circuit design for high performance analytical instruments at the Bell & Howell Research Center in Calif. laid the foundation for his loudspeaker analysis and measurement work at The University of Sydney. Later, he was head of Research at KEF Electronics Ltd. in Maidstone, England. A Senior Member of the IEEE, Dr. Small is a member of the Institution of Engineers Australia. He is a Fellow of the Audio Engineering Society and has received the Society's Publication Award, Silver Medal and Gold Medal. He retired as a senior principal engineer for Harman/Becker Automotive Systems in Martinsville, Ind. 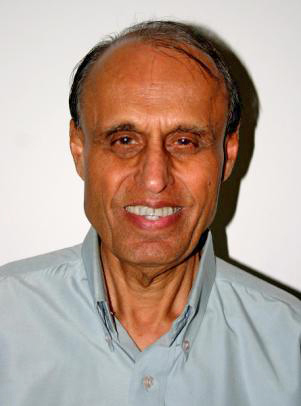 The Gold Driver Award recognizes contributions to ALMA International. This year the award will be presented to Dr. Kuldip Raj.
Dr. Kuldip Raj joined the technical staff of Ferrotec (USA) Corporation, formerly known as Ferrofluidics Corporation, in 1977. As an Engineering Fellow, he is responsible for developing new ferrofluids and products based on ferrofluids for many areas, including the loudspeaker industry. His research has resulted in many of the high stability, high reliability ferrofluids found in millions of speakers worldwide. APG Ferrofluids – 800, 300, 900 and letter series O, S, L, E and J were all a result of Dr. Raj’s research and development work. Most of these fluids are still in use today. Dr. Raj has also pioneered the use of ferrofluids in an ever-widening selection of speaker types, from Compression Drivers in public address systems to micro speakers in ear-buds and cell phones.
Prior to joining Ferrotec, Raj was a Postdoctoral Research Associate at the University of Connecticut from 1975-77, where he was involved in basic studies of amorphous magnetic materials using NMR, X- ray Magnetization and electron microprobe techniques. He received his PhD in Physics from Fordham University, New York in 1975, in hyperfine field studies of magnetic semiconductors europium chalcogenides. From 1974 – 1975 he was a Research Specialist at UConn, responsible for setting up and supervising a low temperature Pulsed NMR laboratory.
Before coming to the USA for higher studies, he was a scientific officer at the Atomic Energy Establishment in Bombay, India. There he designed and implemented experimental techniques for determining the abundance of stable isotopes.
Dr. Raj is an author/coauthor of dozens of technical papers and holds more than 50 patents.

Confirmed Speakers
Steve Temme (Listen Inc.) has been conducting some very interesting and revealing research into the audibility and inaudibility of distortion. Steve Temme will present his findings at the 2015 Winter Symposium titled “The Correlation between Distortion Audibility and Listener Preference in Headphones.” His paper starts by reviewing the well-known fact that the frequency response of loudspeakers and headphones has a dramatic impact on sound quality and listener preference. But, Mr. Temme dives deeper by asking, “What role does distortion have on perceived sound quality?” To answer this question, five popular headphones with varying degrees of distortion were selected and equalized to the same frequency response. Trained listeners compared them subjectively using music as the test signal, and the distortion of each head-phone was measured objectively using a well-known commercial audio test system. The correlation between subjective listener preference and objective distortion measurement is discussed.

ALMA is also pleased to announce that Viktor Gunnarsson, R&D engineer at Dirac Research AB, is presenting a tutorial titled: “A DSP Toolbox for Digital Control of Miniature Loudspeakers.” The tutorial ask, “How far is it possible to push the performance of miniature loudspeakers?” While speaker driver technology development seems to be reaching diminishing returns, attention has been shifting to the possibilities of digital control, of making a 'smart' speaker system where the speaker, amplifier, and signal processing are optimized together.
This tutorial is a case study examining Dirac’s signal processing technologies in the smartphone market, and presents a hands-on introduction to Dirac’s toolbox of signal processing technologies and sound tuning tools developed for micro speakers and equally applicable to speakers of all sizes.

Tom Lee of Wireless Speaker and Audio Association (WiSA) will also present at ALMA's 2015 Winter Symposium. The presentation will address wireless speaker protocols, Compliance Test Specification (CTS), the relatively unused 5.2 to 5.8 GHz UNII radio frequency spectrum, reliably transmitting uncompressed HD audio from 2-channel stereo to 7.1 surround, along with system configuration and calibration data. The goal is an interoperability compliance program for speaker brands and manufacturers of CE devices so that different brands can “talk to each other.”

Peter Larsen, founder of Loudsoft, will present a tutorial at the 2015 Winter Symposium detailing the improvements of their Fine R+D acoustic measuring software. One of the more interesting changes is the ability to connect a world class 1/4” GRAS microphone directly to the Fine R+D hardware without a mic pre-amp.

Tim Gladwin of Warkwyn Associates will be presenting “Mitigating Enclosure Resonances by Mapping Vibration Patterns” at the 2015 Winter Symposium. Mr. Gladwin investigates current techniques to measure, analyze, and minimize enclosure vibration and compares and contrast these techniques to laser scanning vibrometry which provides precise SPL data and reduces time to market.
If you are beset with customer specs which require you to minimize enclosure wall thickness, implement acoustically-challenged industrial design, and work with unfavorable lowest-cost materials, then this is a must see tutorial.

Dr. Wolfgang Klippel of Klippel GmbH will discuss the latest developments in active loudspeaker systems in his presentation entitled ”Acoustical Output Based Evaluation of Loudspeaker Systems". These active systems use an audio input signal generated by a high impedance source (XLR) or in a digital format and thus, require a new measurement technique which does need access to the transducer terminals to define the terminal voltage, input power or any other electrical reference values.
His paper reports on a draft for a new IEC standard proposal developed by the German committee TC 100 which may replace eventually the standard IEC 60268-5 limited to passive transducers and systems. The draft proposes using the maximal sound pressure level as stated by the manufacturer to attenuate the stimulus of the measurement system and to realize comparable measurement conditions and reproducible results. The draft also defines the next generation of new test signals such as sinusoidal chirp, burst and multi-tone complexes and new analysis of sound pressure signal to describe directivity, thermal compression, nonlinear distortion, rub &buzz and other loudspeaker defects.

Sean Olive, Harman, is presenting a paper titled, “The Influence of Listeners’ Experience, Age, and Culture on Headphone Sound Quality Preferences”, where he discusses double-blind headphone listening tests which were conducted in four different countries (Canada, USA, China, and Germany) involving 238 listeners of different ages, gender, and listening experiences. Listeners gave comparative preference ratings for three popular headphones and a new reference headphone that were all virtually presented through a common replicator headphone equalized to match their measured frequency responses. In this way, biases related to headphone brand, price, visual appearance, and comfort were re-moved from listeners’ judgment of sound quality. On average, listeners preferred the reference headphone that was based on the in-room frequency response of an accurate loudspeaker in a reference listening room. This was generally true regardless of the listeners’ experience, age, gender, and culture. This new evidence suggests a headphone standard based on this new target response would satisfy the tastes of most listeners.

Finally, Mike Klasco of Menlo Scientific will present a business-oriented paper about ”Doing Business in China”. In this session Mike Klasco will lead a discussion about working with OEM and ODM product development partners and product managers in how to successfully bring products to market. Projects can range from designing from a clean sheet of paper to brands that are in a hurry and are looking for how to pick an global vendor and grab something off-the-shelf. This will include discussions about best practices in working with: (1) Off-shore manufacturing and supply chain, (2) industrial design services, (3) Engineering services, (4) Off the shelf and semi-custom subassemblies. This paper is a must see to CEO’s, engineers, PA’s, consultants, spec writers, or anyone trying to navigate international sourcing.