For some years, Oberton has been conducting efforts in the development of a new composite fiber diaphragm, combining a low relative weight and a high damping factor as in beryllium, with mechanical characteristics similar to titanium. The article details the comparative study that took place directly within the research conducted by the famous loudspeaker manufacturer from Bulgaria. This article was originally published in Voice Coil, May 2020.
This article discusses the behavior of beryllium (Be), titanium (Ti), and CN fiber (a composite based on high-strength carbon fibers) diaphragms in 4” compression drivers in the 10 kHz to 20 kHz range, or more precisely, the area in which the II, III, IV, and so forth modes appear. 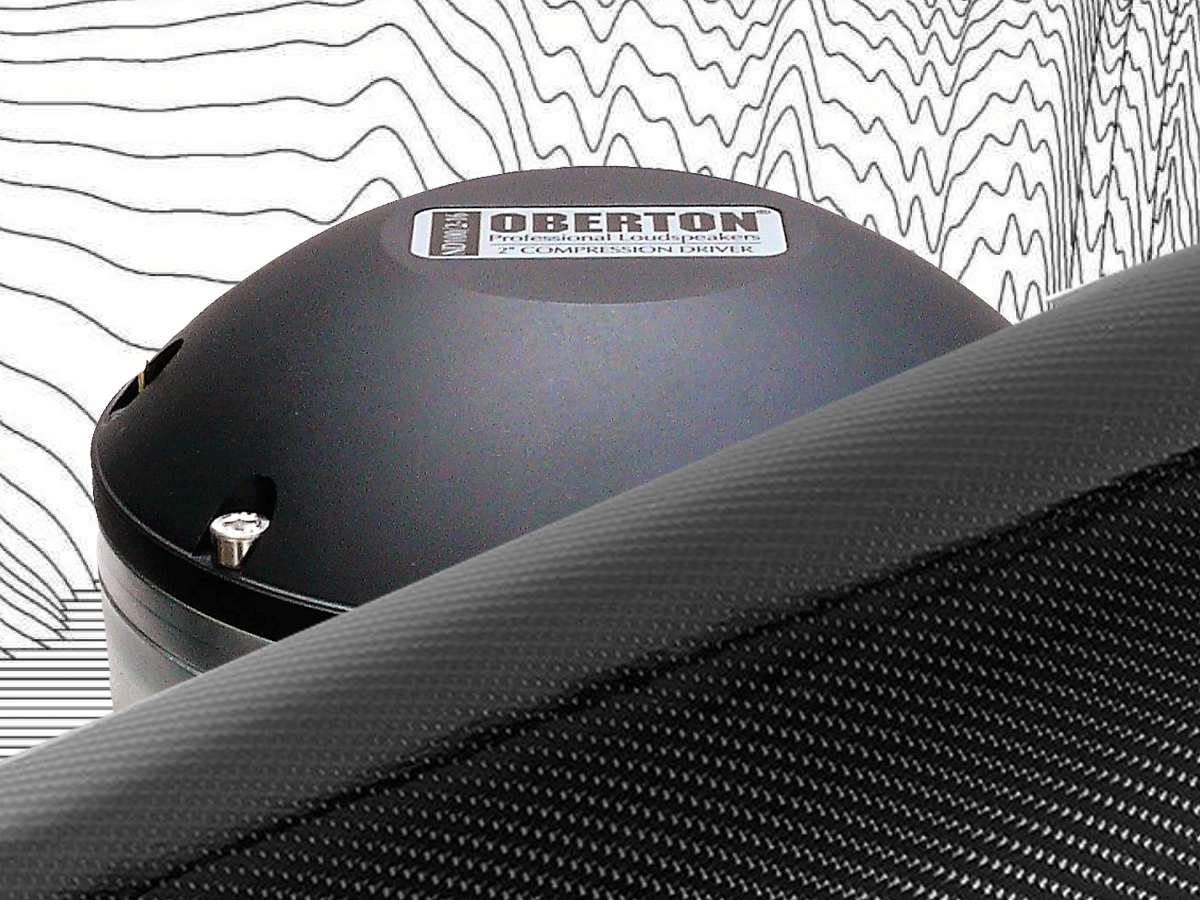 In the article “Extended Range Beryllium Dome Diaphragm Assembly for Large Format Compression Drivers” by Marshall Buck, Peter Andrews, Gordon Simmons, and Sam Saye, the behavior of the Aluminum (Al), Titanium (Ti), and Beryllium (Be) diaphragms have been examined in detail in this problematic area for each 4" coil driver (see Table 1). The conclusion that Be is the most suitable material for making such diaphragms is clearly imposed by its properties: the relative weight, the Young’s modulus, the Poisson’s ratio, and the speed of the sound in the material.

Regardless of all the indisputable qualities, the Be diaphragm has some disadvantages. At high load due to accumulation of defects in the crystal lattice (fatigue of the material), the diaphragm begins to break. However, this fatigue of material occurs much faster in aluminum and titanium diaphragms. Last but not least, high price is a primary factor limiting the use of Be as a diaphragm material for 3” and 4” drivers.

This jitter of the titanium diaphragm leads to an unnatural, metallic, dry sound of the compression driver, especially at high sound levels typical of professional sound systems. Although the Ti membrane suspension is made from PET, PEN, KAPTON, or PEEK films, it is not enough to dampen these vibrations.

CN Fiber
Efforts in the development of the Oberton CN fiber diaphragm were aimed at creating composite material combining a low relative weight (~0.99 kg/dm3) and a high damping factor as in beryllium and mechanical characteristics similar to titanium in order for this composite to replace the Ti diaphragms and at the same time, decay time close to those of beryllium diaphragms are achieved.

For this purpose, a composite material based on carbon fiber (CN fiber) was developed, as well as a suspension capable of quenching the jitter on the diaphragm periphery. Thus, the combination of CN fiber diaphragm, textile-based (polycotton) suspension and specific impregnation to increase the absorption of jitter have shown excellent results that lack of additional jitter or at least its amplitude is greatly reduced. The temperature range in which the vibrating system made by this technology maintains its working life is wide (-30/+110°C) due to the low coefficient of linear extension of the diaphragm and the suspension. Another feature of the composite diaphragm is the lack of fatigue of the material and associated bursting at high loads typical of Al, Ti, and Be.

Comparative Fast Fourier Transform (FFT) impulse cumulative spectral decay (CSD) waterfall plot measurements were conducted with three 4” compression drivers manufactured by different well-known compression driver manufacturers. Two with Titanium diaphragms are displayed in Figure 1 and Figure 2. A beryllium diaphragm is depicted in Figure 3, and is compared to a CN fiber diaphragm driver manufactured by the Oberton company as seen in Figure 4. (Editor’s Note: The brand names were removed for the purposes of this study.)

Subjectively, according to listening test performed by Oberton, the sound quality of the Oberton CN fiber diaphragm driver (e.g., the N72HB compression driver) was described as more detailed and soft compared to a Ti diaphragm driver. This is due to the low decay time of CN fiber, which is comparable to the decay time of Be. VC

This article was originally published in Voice Coil, May 2020.