For some time, bass shaker enhancements were the only way for the movie (or video gaming, simulation, or virtual reality) to reach out to the audience and touch them. But now when it comes to haptic components, many consumers are asking for more. While bass shakers can’t rock your world and deliver over-the-top fully immersive realism for acceleration or large motions, there is another class of devices that can.

Beyond the world of subwoofers and bass shakers lays motion simulation. There are products now on the market that use hydraulic or long-throw electrolinear actuators and outboard motion processors — previously popularized in “virtual reality” rides — for home applications. These products radically differ from tactile transducers in that they require the manual composition and synchronized playback of motion signals, in addition to the standard soundtrack the motion is meant to accompany. Not common (as of yet) but prized by committed home-theater fanatics, these motion simulators deliver the ultimate movie experience.

The majority of bass shakers cannot fully simulate gravitational forces. They are incapable of producing the motional cues required to trick the mind into thinking it is immersed in the simulated environment and experiencing kinematic changes in position, velocity, and acceleration. Very few power shakers can reach the necessary forces and have significant excursion when approaching the sensation of motion platforms.

Earthquake Sound’s Quake 10.0 is a high-excursion tactile transducer, which is designed to reproduce the effects of the lowest frequencies in music and movies. Quake 10.0 is sensitive, articulate, and renders even the complex low-frequency material in detail. It is so powerful that in terms of sheer force it can even replace traditional hydraulic platforms in some theme park applications (see Photo 1).

Linear actuators are related to bass shakers but feature additional capabilities. These piston-like electromagnetic devices transmit motion. Linear actuators directly and physically lift home-theater seating in the vertical plane rather than transferring vibrations (by mounting within a seat, platform, or floor). Motion platforms for amusement park rides, flight simulators for pilot training, and so forth have been around since the mid-1980s. These typically use hydraulic power (see Photo 2).

In some form or another, motion simulation has been around for a long time. One example is the merry-go-round with its moving horses. Motion is provided by rotating cams driven by some sort of power (e.g., electric, gas, or even steam). A motion simulator or motion platform creates the effect of being in a moving vehicle or some other motional environment. It can be anything from an elevator to a horse ride. Take for example, a coin-activated horse ride, which is really a crude motion platform. However, to be convincing and fool your senses, the movement needs to be synchronous with the visual image.

Motion simulators can also be classified according to whether the occupant is controlling the experience (e.g., a video game or real-world flight simulator) or whether the occupant is a passive rider (i.e., a simulator ride or motion theater). Examples of passive ride simulators include theme-park rides in which an entire theater system with a projection screen in front of the seats is in motion on giant actuators.

In the 1990s, Aura Systems was working on electro-actuator alternatives to hydraulics for the food industry (e.g., deep punching of aluminum into beer cans). Hydraulics are intrinsically messy and you really don’t want oil near your food containers. Other applications for linear-motion electric actuators include servo-controlled aircraft landing gears (great for smooth landings on aircraft carriers) and active vibration canceling for helicopter engines. However, more relevant to this month’s topic is the high-power linear motion actuators for motion platform rides.

When the Luxor opened in 1993, the glass pyramid hotel was a flagship for Las Vegas, NV. One of its features was a deep-mine archeological excavation ride in which visitors were lead into a mine elevator and told the lift “had some problems but were now fixed... sort of." The gate would close and you really felt (due to the Aura long-throw linear actuators) that you were moving downward. Then, the elevator began to jerk, slip, and rapidly descend. That sensation was produced by the long-throw linear actuators. In reality the actuator’s total "throw" was less than 2’, but it felt like far more and was quite convincing. Yet in the end, the actuator was replaced by hydraulics.

As to the future of hydraulics with the industry’s linear-motion actuators, the answer can be found in the new Boeing 787 Dreamliner, which was the first commercial aircraft to have all its control surfaces controlled by electrolinear actuators instead of hydraulics.

Motion Platforms and 4-D in Movie Theaters
When a theater combines 3-D film with physical effects beyond the motion that occurs in synchronization with the film, viewers receive a 4-D experience, which is the marketing term for this type of entertainment presentation system. Because these physical effects can be expensive to install, 4-D films are usually presented in custom-built theaters at special venues (e.g., theme and amusement parks).

However, some movie theaters have the ability to present 4-D versions of wide-release 3-D films. The films Journey to the Center of the Earth (2008) and Avatar (2009) are among the first films to offer 4-D treatment in certain theaters. Effects simulated in a 4-D film may include rain, wind, strobe lights, and vibration. Seats in 4-D venues may vibrate or move a few inches during the presentations. Other common in-chair effects include air jets, water sprays, and leg and back ticklers.

Theater effects may include smoke, rain, lightning, air bubbles, and even special smells. Examples include the fireworks smells at the London Eye’s Experience and gassy smells when a stinkbug sprays in It’s Tough to Be a Bug.

An early venture into smell information for theater-goers was in John Water’s 1981 film Polyester. The special effect was called “Odorama.” Each attendee received a scratch-and-sniff card with number-coded scratch-offs (see Photo 3). When a number appeared on the screen, you scratched the corresponding surface on the card. Posters for the film promoted it as being “Scentsational.” And, some of the smells were not for the faint of heart!

Things have come a long way since Odorama. Take for instance, the “surprise factor” during a Shrek cartoon, which was offered in a Disneyland theater in California. About half way through the cartoon, the donkey sneezes at the audience and on the back of each seat the tiny (well concealed) spray nozzles directed a water spray toward everyone’s face.

Now that we’ve provided a few concepts behind motion platforms and 4-D, let’s examine some of the systems used to control these effects.

D-BOX Technologies has its own control track. Much like a movie soundtrack, MFX (D-BOX’s name for motion effects) are created frame-by-frame by motion designers to become a motion-code track. Select international and North American movie theaters are equipped with D-BOX motion systems. The first feature film encoded with D-BOX was Fast & Furious, which was released in 2009. Since then, many releases have ranked first at the box-office.

4DX, developed by the South Korean company CJ 4DPLEX, enables a motion picture presentation to be augmented with environmental effects (e.g., motion, scents, mist, and wind) in addition to standard video and audio. 4DX made its debut in 2009 with the release of Journey to the Center of the Earth in South Korea. Due to the huge success of the film Avatar, the technology has globally expanded to more theaters, but not so much in the US.

4DX technology is available in more than 10,000 theater seats in 16 countries and 58 cities. A theater can be built or retrofitted with special equipment to support 4DX features, which include seat motion, tactile vibration, and jets of air or water. For a motion picture to make use of a theater’s 4DX features, a 4DX “track” needs to be programmed in parallel to the existing video and audio tracks. In other words, a 4DX movie is a standard movie with the addition of a 4DX track that controls the 4DX features during playback.

Motion Simulators at Home
For over-the-top movie enthusiasts who want motion simulation at home, there are a couple of motion systems including the home version of D-BOX, Odysee, and CKAS Thruxim.

D-BOX Technologies first introduced its motion-generating systems for private use in 2001 to the home theater and PC gaming markets. For existing seating, motion can be added with the help of a D-BOX Motion Platform. The motion-channel signal drives the actuators in the seating. As of 2013, the system supports more than 1,000 movies.

Gaming products are also available through one of its gaming partners. D-BOX also supplies motion systems to integrators in various sectors, which include racing and flight simulators, home-theater seating manufacturers, arcades, casinos, industrial, governmental, institutional, museums, and so forth (see Photo 4).

The Odysee Kinetic Home Entertainment motion simulator uses four actuators — one in each corner of the couch — which physically lifts and moves your couch around and up in the air similar to a hydraulic lowrider. The system includes CD-ROMs that contain motion cues for several popular movies on DVD (currently 30 to 40 movies). A D-BOX motion system is at the system’s core. 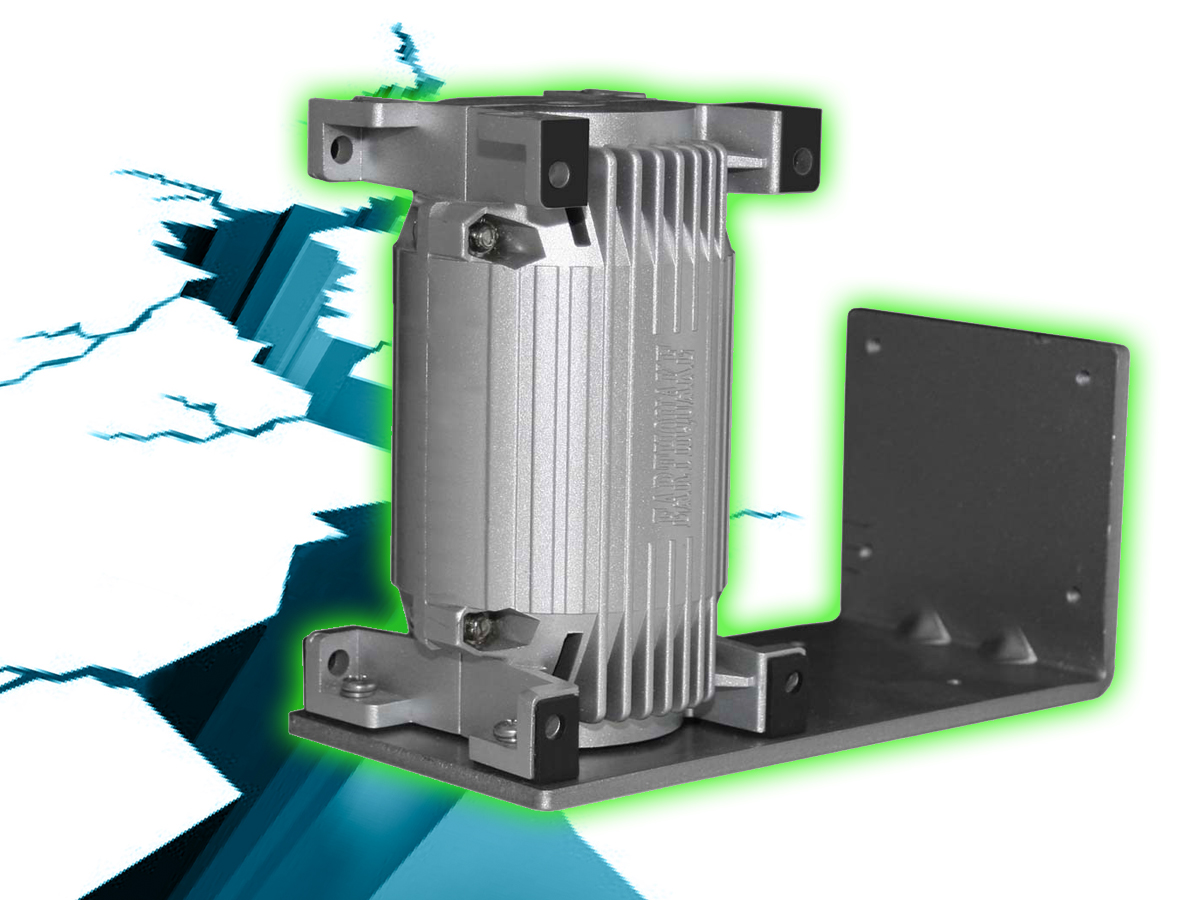 The CKAS Thruxim motion platforms are high-performance home-motion simulators for gaming, which come supplied with a “roll cage.” The Thruxim series are the culmination of CKAS’s professional experience in commercial simulators, which focus on priorities for private enthusiasts and thrill seekers (see Photo 5). aX