Horns are often used in loudspeaker systems for a variety of reasons. One may be to provide increased acoustical loading to the driver attached to the horn. This helps to increase the sensitivity/efficiency. Another may be to provide some control over the radiation pattern of the driver attached to the horn. Article originally published by Voice Coil, November 2010. 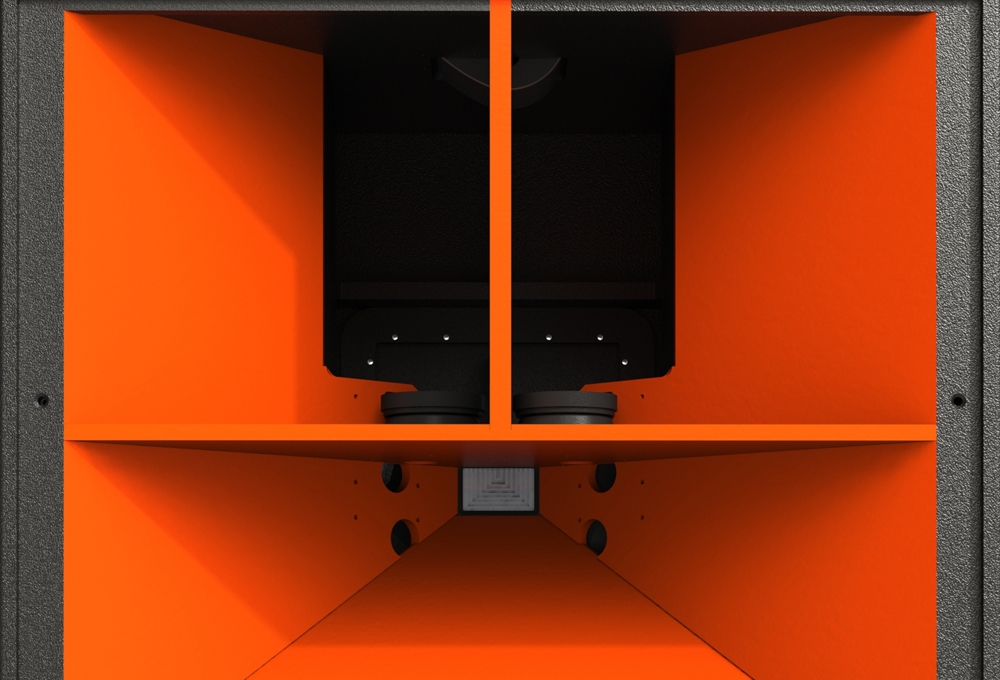 Horns are often used in loudspeaker systems for a variety of reasons. One may be to provide increased acoustical loading to the driver attached to the horn. This helps to increase the sensitivity/efficiency. Another may be to provide some control over the radiation pattern of the driver attached to the horn. It is this directivity control aspect upon which I will focus attention for this article.

In 1975 Don Keele presented a paper at the 51st Convention of the Audio Engineering Society that introduced the modern Constant Directivity horn. This new horn design (new at that time) combined an exponential throat section, to provide good loading at lower frequencies, with a conical or straight wall section that provided a more uniform coverage pattern in the higher frequency region than a pure exponential horn.

In this paper he noted the relationship between the coverage angle of the horn, the low frequency loss of directivity control, and the horn mouth size, so Equation 1 is d = K/(Θ × fΘ).

If you have a horn with a known coverage angle and you also know the mouth dimension, you can rewrite this equation to solve for low frequency loss of directivity control, which gives Equation 2, fΘ = K/(Θ × d).

Above this frequency the coverage angle, or beamwidth, should be fairly constant. Below this frequency, however, the beamwidth should increase as you lose directivity control. This is an extremely important point to keep in mind when evaluating potential loudspeakers for use in system designs where good directivity control is required.
Loudspeaker spec sheets all too often reference a nominal coverage pattern with little qualification as to the frequency region over which this beamwidth is actually maintained. As you will see later, omitting this information and an erroneous assumption on the designer’s part may yield less than desirable end results.

Graphing Equation 3 will indicate how the loss of directivity control progresses with decreasing frequency. This is shown in Fig. 1 for a hypothetical horn with horizontal and vertical coverage angles of 90° and 45°, respectively.

The horn has a 12″ (30cm) square mouth. A real horn might not be quite as well behaved in the region around the initial loss of directivity control frequency. This is intentionally not shown because its cause is beyond the scope of this article and to simplify the presentation of the relevant topic.

This would place the vertical loss of directivity control frequency at a bit over 1.35kHz. In order for the loss of directivity control frequencies to be the same for both the horizontal and vertical beamwidth, the more narrow coverage angle must have a mouth dimension that is larger by the ratio of the coverage angles. Let’s say that you want to modify the example horn for this to occur. The coverage angle ratio of 2:1 would mean the vertical mouth dimension, height, would need to be twice that of the horizontal mouth dimension, width. So you would now have a horn mouth that is 12″ (30cm) wide and 24″ (61cm) high.
This can be verified by employing Equation 1 to calculate the new required height dimension. With this new height, Equation 3 may again be used to graph the beamwidth (Fig. 3). The directivity balloons for this 24″ tall horn (Fig. 4) show the improved directivity control at 1kHz compared to the 12″ tall horn (Fig. 2).

What about a more commonly seen horn, one with a height much smaller than the width? For 90° × 45° horns from some manufacturers, mouth dimensions of 12″ (30cm) × 6″ (15cm) would not be out of the ordinary. Again, I will use Equation 2 to calculate the new frequency for the vertical loss of directivity control with the more commonly dimensioned horn. This turns out to be 3.7kHz. Using Equation 3 to graph the beamwidth yields Fig. 5.

Here you see something very interesting not present in the previous graphs. Below 2kHz the vertical beamwidth is actually greater than the horizontal beamwidth! This is sometimes referred to as “pattern flip.” The vertical coverage pattern of the horn, which is supposed to be narrower than the horizontal coverage pattern, is now the broader coverage angle. In other words, the horizontal and vertical beamwidth have flipped with respect to which is greater and which is lesser. This is particularly noticeable when examining the directivity balloons
shown in Fig. 6.
As mentioned earlier, if the spec sheet for a loudspeaker using a horn of similar dimensions merely gave the intended, or nominal, coverage angles with little or no information as to the frequency range over which the coverage angles were maintained, you might erroneously believe that the stated beamwidth is valid for a much larger frequency range than is actually possible. As such, the loudspeaker performance shown in Figs. 5 and 6 may not work well for applications requiring good directivity control in order to facilitate adequate speech intelligibility.

The intended vertical beamwidth of 45° is only achieved above 3.7kHz. Below this frequency quite a bit of acoustical energy could be put into areas where it is not desired. This will become noticeable when mapping the coverage of a loudspeaker using one of these types of horns in a room. The other item that may be observed is that below 2kHz the loudspeaker may perform better if it was turned on its side. This is also seen in Fig. 6.

As with most engineering exercises, there are several items that must be balanced when it comes to the directional performance of horns: narrow coverage angle, the desired low frequency for maintaining the coverage angle, and small horn size; pick any two. The two that you choose will dictate what the third must be. You can’t arbitrarily have all three at the same time.

I hope this has helped to explain a bit about how the frequency dependent directivity of a horn relates to its size. Small horns simply can’t yield small coverage angles at low frequencies. Beware of those that attempt to advise, or advertise, differently.
Author: Charlie Hughes
Originally published by Voice Coil, November 2010
related items