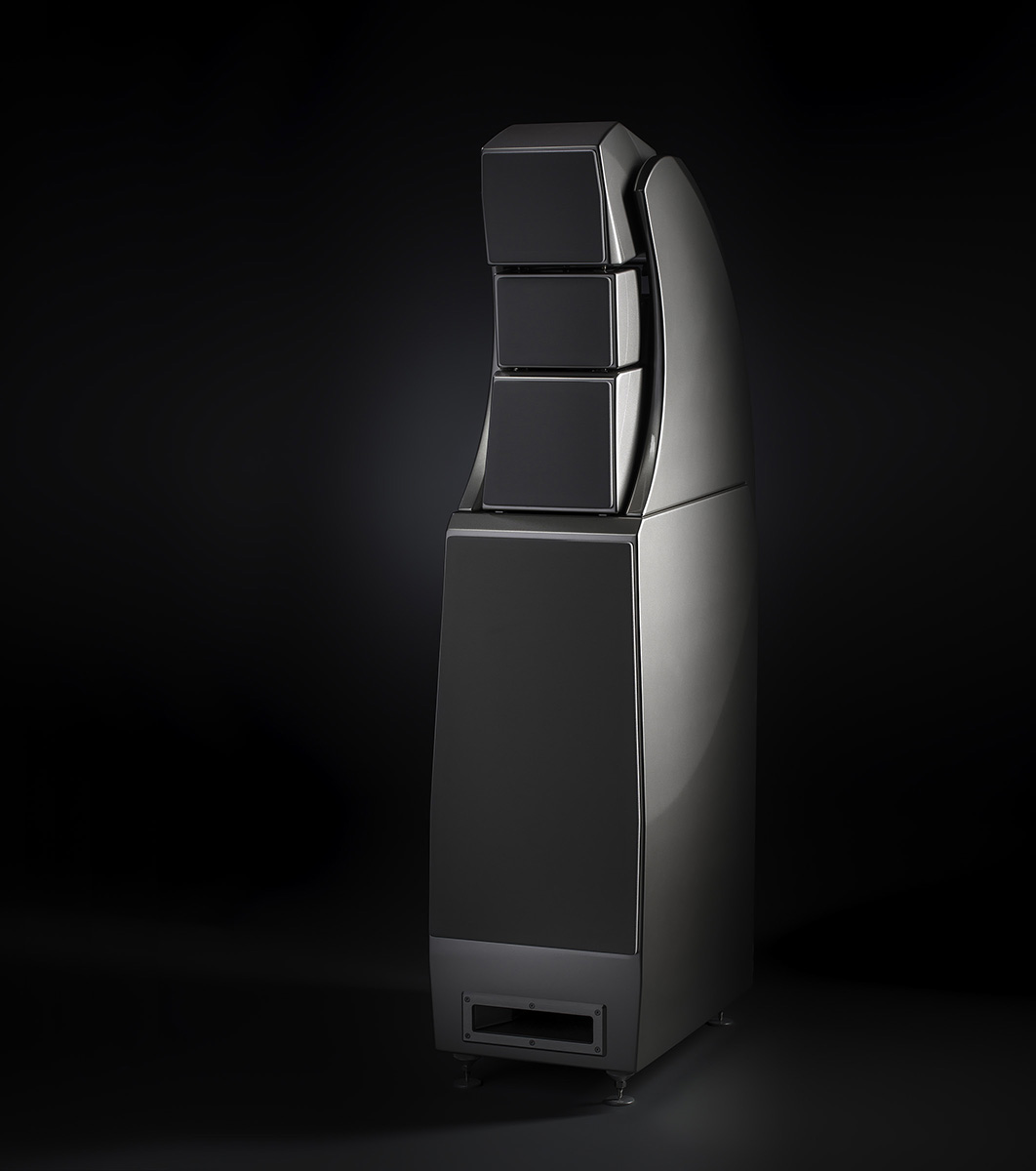 It may be intuitive to assume the Alexx replaces the venerable MAXX, in that it is Wilson’s latest entry into the large speaker segment just below the Alexandria, but, in reality, the comparison with the MAXX begins and ends there. Instead, the Alexx is an altogether more complex and sophisticated loudspeaker. Alexx incorporates Wilson’s latest thinking on loudspeaker design in the areas of time-domain geometry, driver configuration, and driver development.

Alexx is the latest beneficiary of Wilson’s ongoing analysis of low-resonance cabinet strategies via laser vibrometer. Alexx draws from both recent designs such as the Alexia and the Sabrina, as well as the WAMM — Dave Wilson’s up and coming Magnum Opus — with which it was developed concurrently. All-new “MTM” Driver Geometry: The “MTM” (Midrange-Tweeter-Midrange) geometry generally refers to a driver arrangement where two midrange drivers flank a tweeter vertically. This arrangement has several advantages, among which is greater dynamic range in the midrange portion of the spectrum. Wilson has employed various versions of MTM driver geometries starting with the X-1 Grand SLAMM. However, Wilson’s MTM configurations have always been far more sophisticated and complex than competing designs. 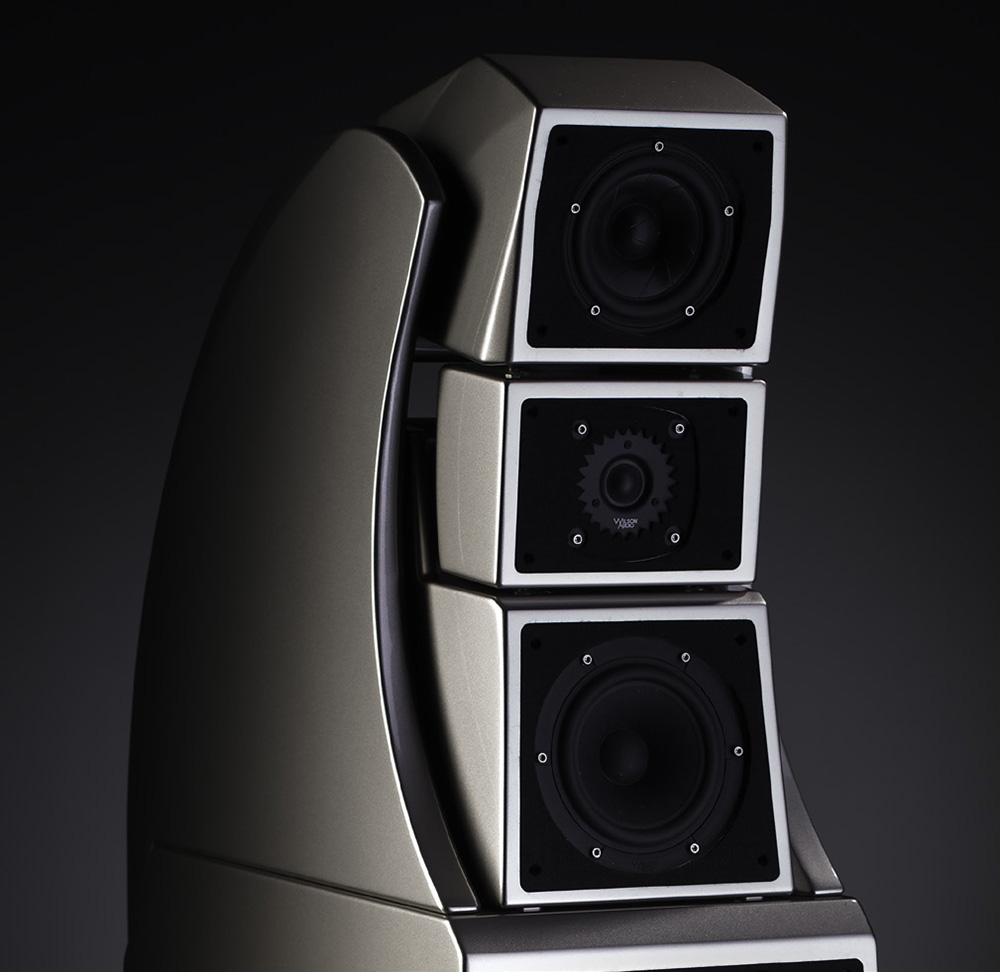 Rather than mounting the three drivers that make up the MTM in a flat baffle, Wilson has invariably employed a modular approach. This has several benefits, one being the ability to optimize the enclosure properties for each driver. Most importantly, in terms of Wilson’s unique technology, the separate modules in the MTM can be made to be adjustable—both in terms of the relative position of each driver module one-to-another in the time domain, as well as having the ability to optimize each driver’s dispersion characteristics within the array.

For the Alexx, Wilson’s engineering team has once again reimagined the MTM geometry. Drawn from technology developed in conjunction with the upcoming WAMM, the Alexx’s midrange is divided between two different drivers, each covering a portion of the mid-band area. The seven-inch is the celebrated Wilson mid, first introduced in the Alexandria XLF. The 5.75-inch is the midrange driver most recently found in the Sabrina. The frequencies covered by the two drivers are therefore expanded upward, the two together covering a broader portion of the vital midrange. Further, each of the two drivers is optimized for the portion of the mid-band best suited to their unique strengths.

The engineers at Wilson have blended the two drivers masterfully, ensuring that the two perform seamlessly and coherently together. The unprecedented combination of weight, speed, articulation, and authority can only be fully understood by listening to the Alexx. 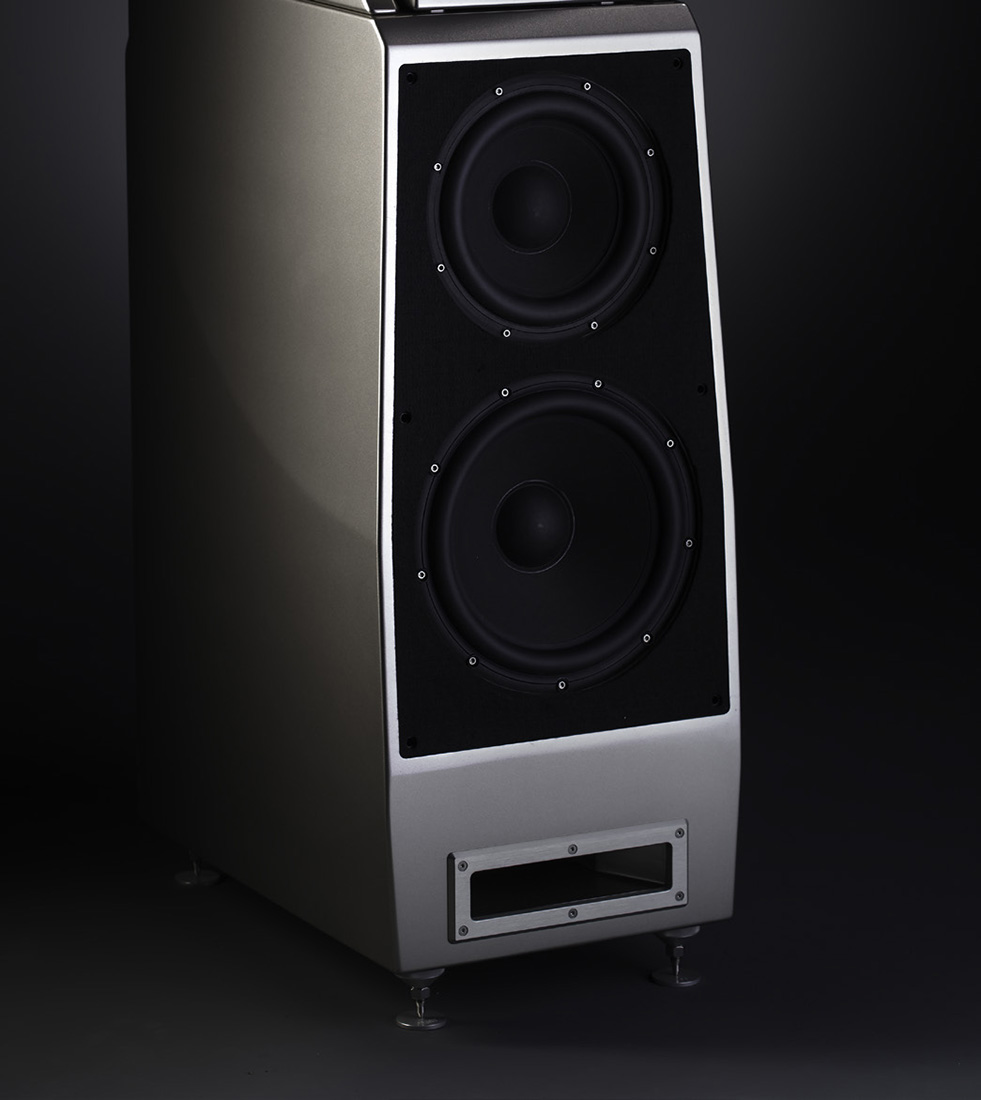 Developing Alexx simultaneously with the WAMM has resulted in other shared technologies. The all-new ten-and-half-inch and twelve-and-a-half-inch woofers incorporated into the Alexx were first developed for the WAMM project. In turn, the technology for these two new woofers evolved from the proprietary eight- and ten-inch models found in the Alexia. Thus, Wilson continues its tradition of systematically evolving technology across platforms, each new iteration building on the achievements of the previous projects.

These new ten- and twelve-inch woofers incorporate all of Wilson’s latest current thinking on accurate low-frequency music reproduction. Working together with Alexx’s ultra-low resonance woofer enclosure, which now features an angled baffle for even better time-domain integration, the new woofers raise the bar for bottom octave speed, authority, and musicality.

The Alexx builds upon the Alexandria XLF’s aspherical propagation delay correction for its upper three modules. For the first time, a Wilson array features two stair steps, one for each of the two midrange modules. This allows for minute and precise adjustment of both the proper time alignment of the drivers, as well as the optimal axis relationship of the driver to the listening position. 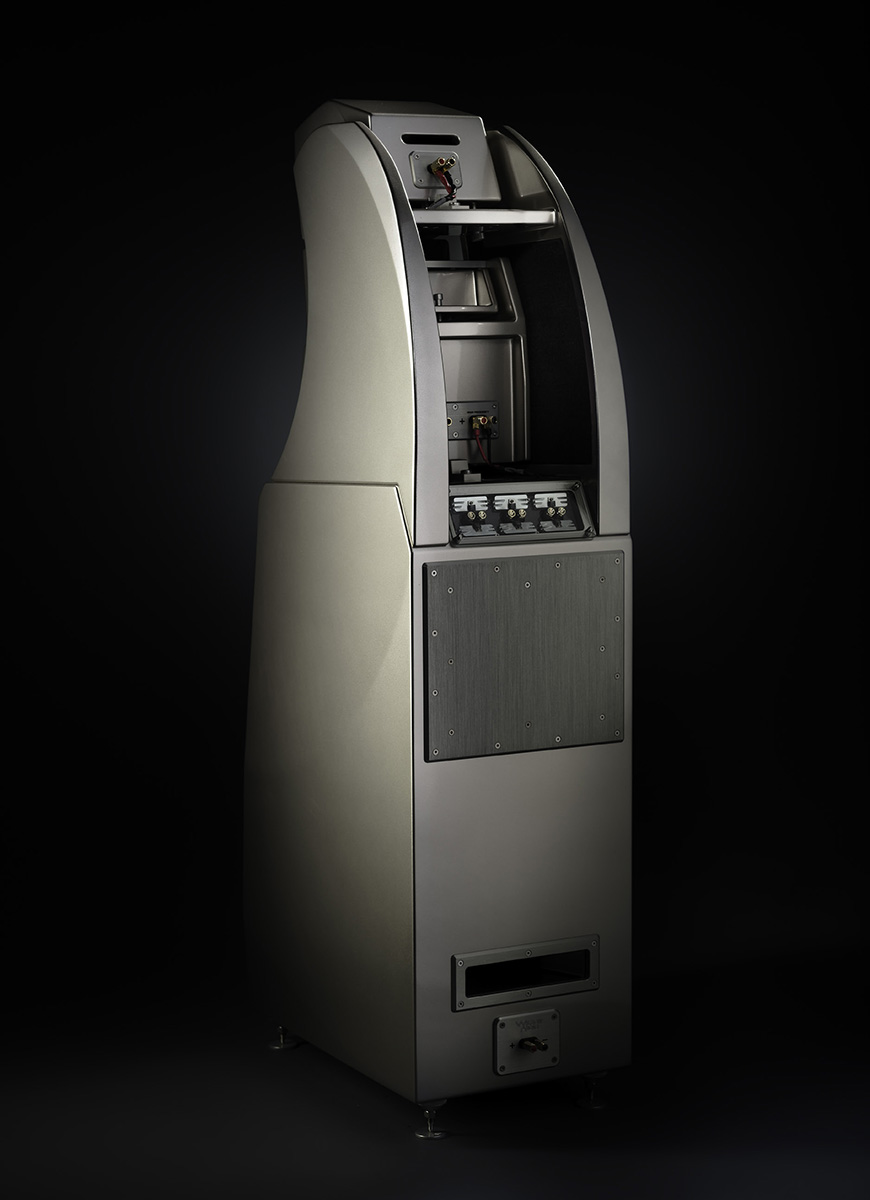 The adjustment mechanism of the lower mid module and the tweeter module and the tweeter is similar to what is found in the Alexia, and evolved from a similar system for the upcoming WAMM. The Alexx time-domain is among the most accurate ever built by Wilson, which means it is the most time coherent loudspeaker currently available.

Alexx also joins the Alexandria XLF with its ability to move the port to either the front or rear of the bass enclosure. While this does not change the anechoic behavior of Alexx in the deep bass, it does enable it to more seamlessly interface with a larger number of rooms. Typically, in bass-lossy rooms, the port will be located on the rear; within bass-heavy rooms, the port moves to the front of the enclosure.

Other important details in the design includes the latest version of the Convergent Synergy Tweeter. Already robust in the lower part of its frequency spectrum, the Wilson tweeter in this configuration is crossed over slightly higher as a direct result of the concentric two-driver mid strategy. The resistor plate, which contains the protection and tuning resistors, is now located on an upper bevel on the rear of the speaker enabling easy sight lines and access.
www.wilsonaudio.com/products/alexx 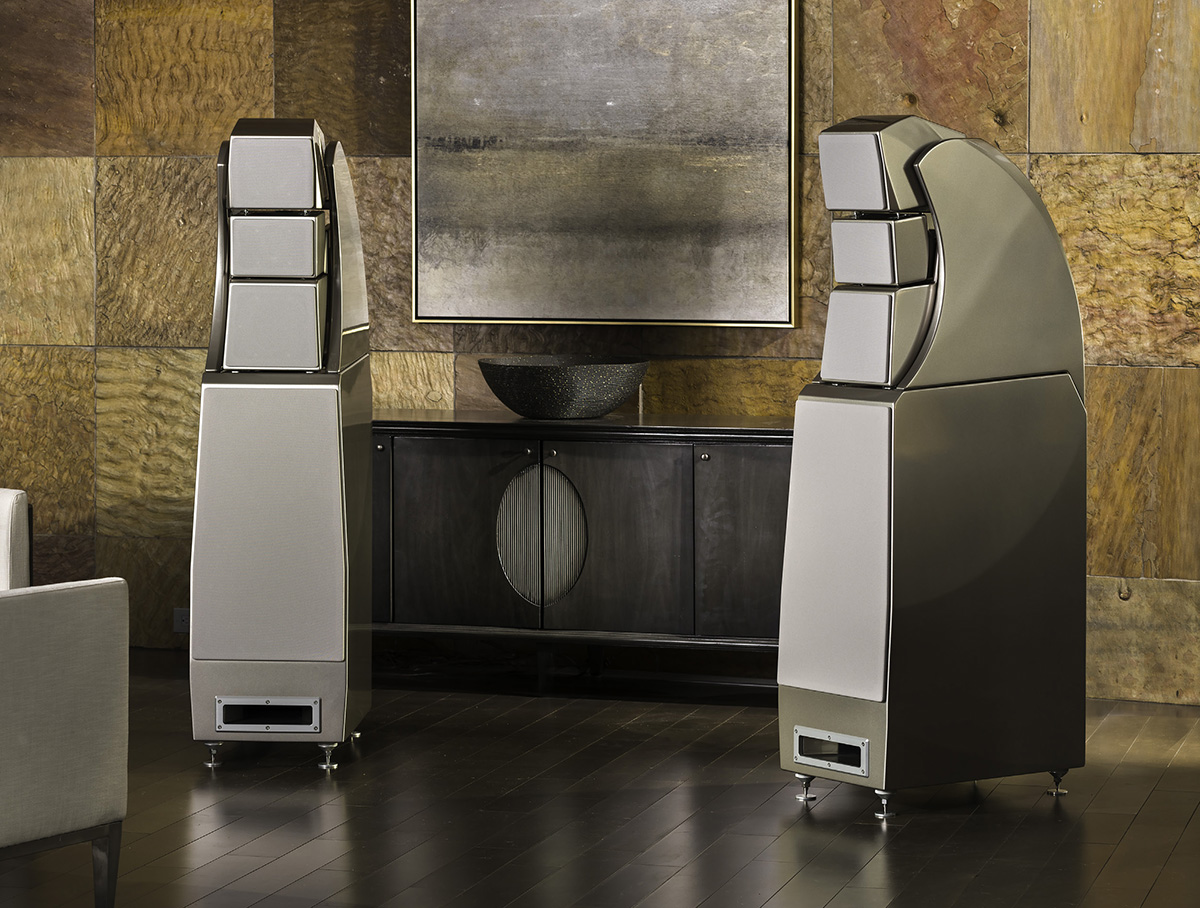