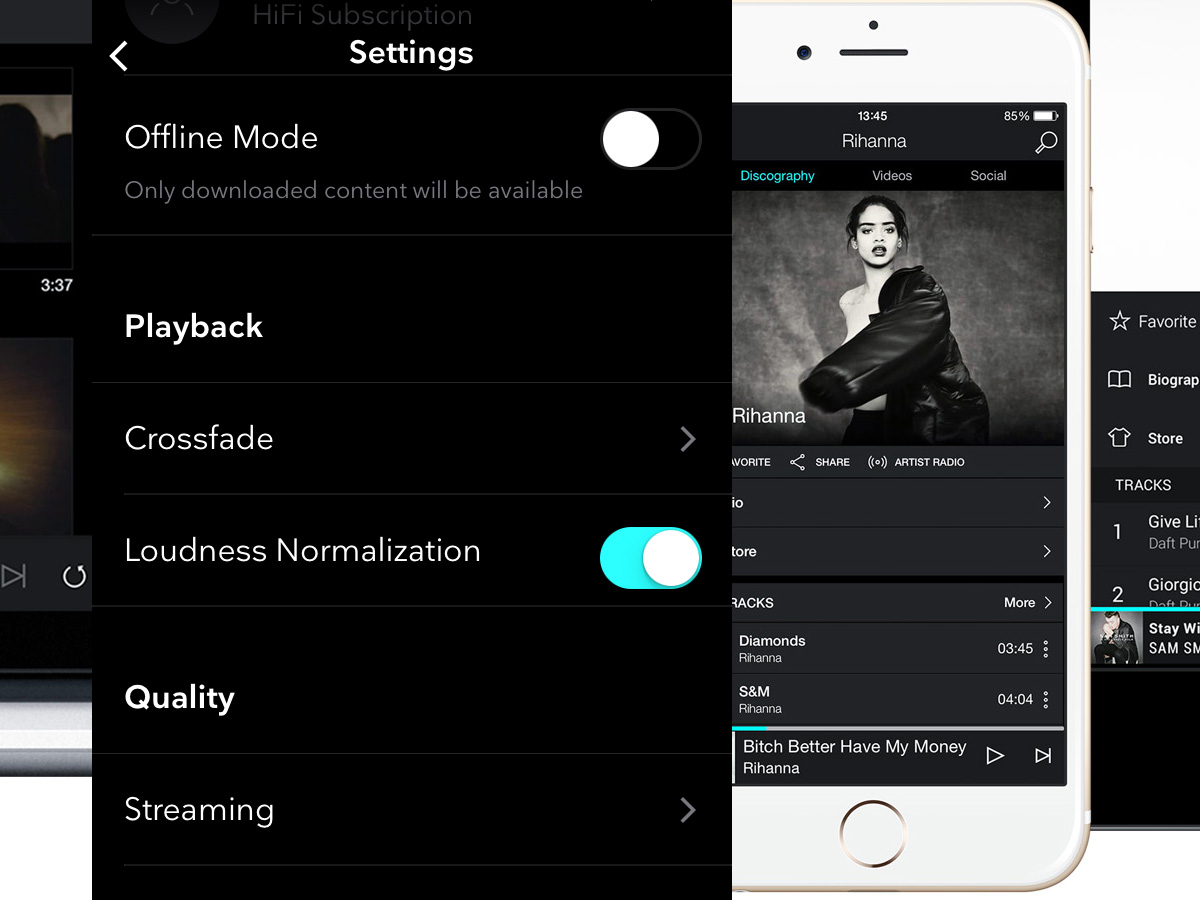 Tidal was the first music streaming service to offer lossless streaming and the first to also offer Master Quality Authenticated (MQA) tracks and albums, allowing users of streaming services to access higher than CD-quality audio. Next on the company's list was dealing with loudness normalization in a way that would be compatible with the demands of its audience. For that purpose, Tidal turned to Eelco Grimm, and the HKU University of the Arts Utrecht, The Netherlands, where they have conducted a vast research, surveying the 4.2 million albums in the company's catalog.

Based on this research, a proposal was developed to use album normalization where the loudest track of each album is normalized to -14 LUFS and the other tracks are aligned to the relative level they have in the album. These levels will then also be used when tracks are played in a randomly shuffled playlist with other albums’ tracks. This proposal was tested against track normalization in a shuffled playlist of 24 songs with 38 subjects. It turned out that 80% of the subjects preferred album normalization, even though the tracks were selected for an extreme difference in loudness, of up to 10 LU.

As Eelco Grimm explains: “Tidal wanted to offer their users an optimal listening experience by adding loudness normalization, but was concerned to interfere with the artistic intention of the producers. So I analyzed the loudness of 4.2 million albums from Tidal’s database and found that even with recent releases quite large loudness differences exist between soft and loud tracks of the album. By normalizing all tracks to the same level these differences are removed and the listener does not have the intended experience. A so called ‘album normalization’ method, where all songs are adjusted with the same offset, solves this problem. The research question now was if these level differences between songs would still be appreciated when the tracks are mixed with songs from other albums in a playlist. The outcome of my subject test was that the majority of users preferred album normalization always, even when soft songs from one album are played next to loud songs from another album. The database analysis further suggested that on mobile devices the loudest track of the albums should be aligned to -14 LUFS."

"Tidal adopted album normalization at -14 LUFS and followed my recommendation to turn loudness normalization on by default. This is not only convenient for the listener, but it also helps to end the Loudness War since there is no advantage anymore in squashing the life out of a master. Such a track will just be attenuated more in the Music Streamer’s app and make less impact than a dynamically mastered track. I am very excited about this development. The majority of music consumers world wide now listens to loudness normalized music. I hope that the few remaining streaming companies that do not offer loudness normalization by default will follow soon.”

"The second question is: what should the target level be for mobile playback? The current generation of mobile devices such as smart phones have a limited headroom to comply with governmental hearing protection laws (4) in the EU. Because of this, AES TD10045 recommends to keep the loudness of programs above -20 LUFS in mobile devices."

Based upon this, the following recommendations to Music Streaming Services are made:

2. Use the industry standard ITU BS1770-4 measurement so that mastering engineers can predict the result of their work for all services at once.

3. In mobile devices, use a target level of -14 LUFS for the loudest track of an album.

4. In a living room setting, lower target levels such as -18 LUFS to -20 LUFS are preferred. The advantage is that albums of more dynamic genres such as classical and jazz will also become loudness normalized.

5. To avoid clipping, only attenuate tracks, never apply positive gain. If the loudest track of an album is softer than target level, all tracks of the album will play soft.

6. In the preferences, loudness normalization should optionally be turned off, for people who are concerned about automatic changes to the data, or for research purpose.

7. Although it seems attractive to add the third option of “track normalization” in the preference to satisfy all users, this can potentially confuse many people. It is not recommended.

8. Provide playback device manufacturers with the option to merge loudness normalization with playback gain, since this offers the highest possible loudness normalization and sound quality. In this case the loudness metadata information of a track is sent downstream all the way to the final gain stage of the system. The playback device manufacturer then merges the normalization data with the user set playback gain and applies just a single gain change. (Mark that if the system is floating point throughout, both gains can also be set independently). The advantage is that over a large range of playback levels, both very dynamic and compressed albums will be perfectly aligned in loudness, and there is no need to select a ‘target level’ anymore.