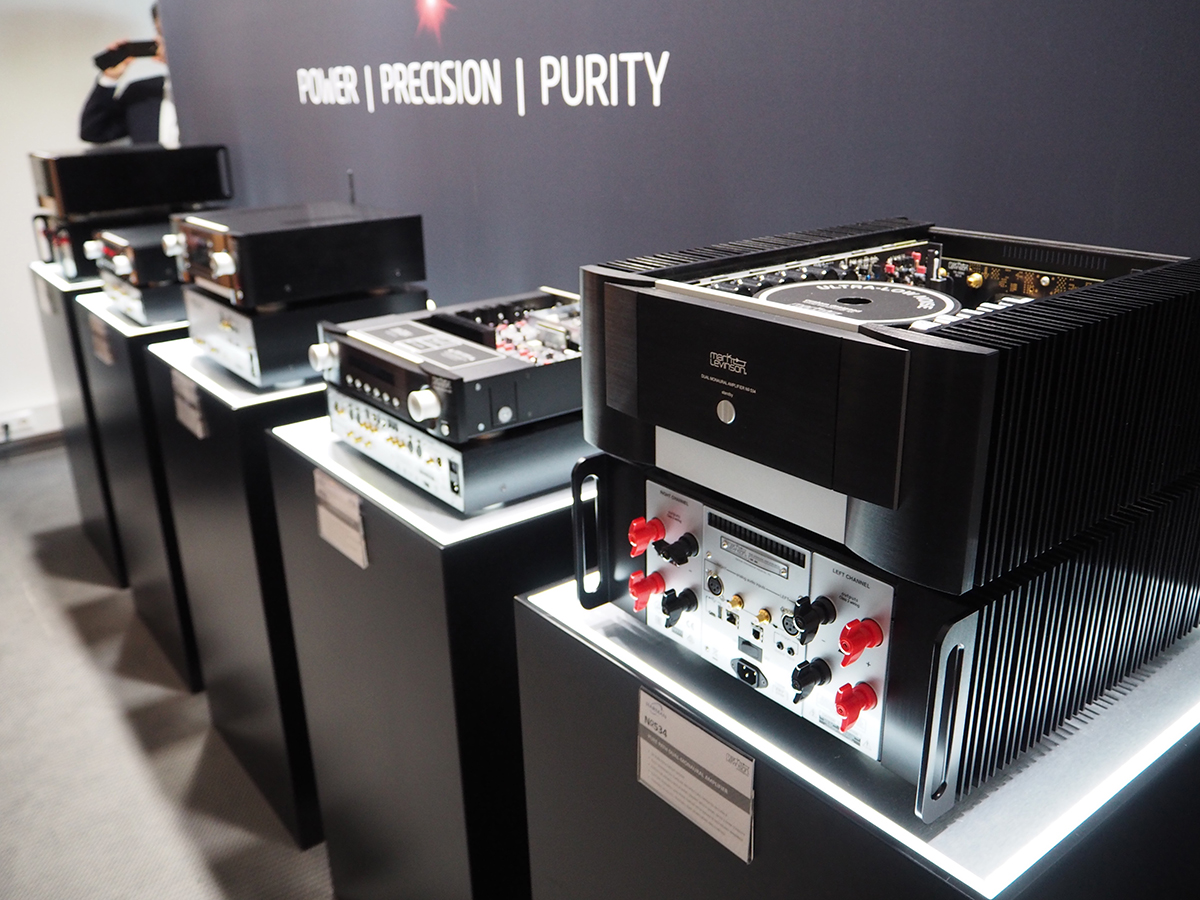 Expanding the brand’s tradition of meticulously engineered audio components, Harman’s Mark Levinson made a strong statement at the Munich High End show, with a complete display of its ultimate range of preamplifiers, amplifiers and new-generation audio players. Together, these new high-end components represent a superior and elegant approach for home audio, offering all the possible options and the simplest possible integration. In fact, with the options now available in the new Mark Levinson 500 range, discerning users will just need to add speakers - and that’s something Harman offers aplenty, starting with the jaw-dropping JBL Synthesis range. In the Munich audition room, the new Mark Levinson components were matched with a unique pair of Project Everest DD67000 speakers (metallic red finish) and the pure-beryllium compression drivers certainly helped to highlight the qualities of such a system. 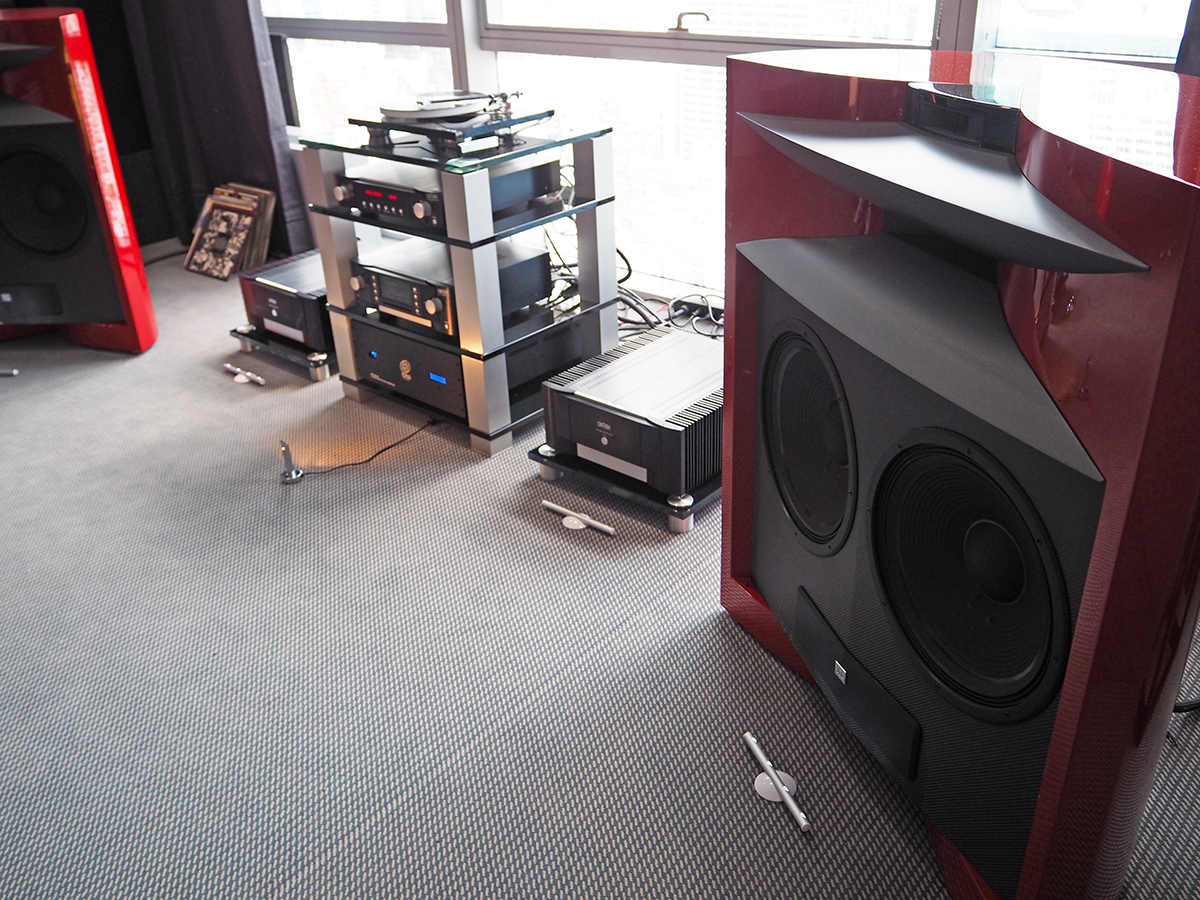 Harman has recently revitalized Mark Levinson as part of its new  luxury audio market strategy. They have hired an experienced engineering team, reinforced the R&D budget dramatically and have opened a new engineering facility in Shelton, Connecticut, (it’s ancestral home) with comprehensive R&D facilities and listening labs to serve as the center of all Mark Levinson product development. Harman also expanded the level of services provided to Mark Levinson customers, throughout its distribution network.

The products introduced in Munich are already the result of this new strategy, initiated around three years ago and clearly indicate a desire to combine the brand’s tradition with the most up to date technology and features. A fine example is the Mark Levinson Nº585 amplifier with integrated 32-bit Precision Link DAC, combining eleven analog and digital inputs with the brand’s proprietary Pure Path discreet, direct-coupled, fully balanced, dual-monaural signal path. This 200W per channel, fully-differential Class AB integrated amplifier housed in a 6000-series aluminum chassis, was in fact the first product to be fully designed and engineered in the new Connecticut facility.

But the 534 also features modern system integration capabilities, with Ethernet, RS-232, and USB for monitoring and network control. The balanced and single-ended inputs allow the combination with virtually any preamplifier or source player with variable output. For connection to loudspeakers without needing tools for a secure link, the № 534 features four pairs of gold-plated binding posts with Mark Levinson Hurricane terminal knobs to support either standard or bi-wired loudspeaker connections. It is scheduled for availability worldwide in Summer 2016 (the 536 is available now). 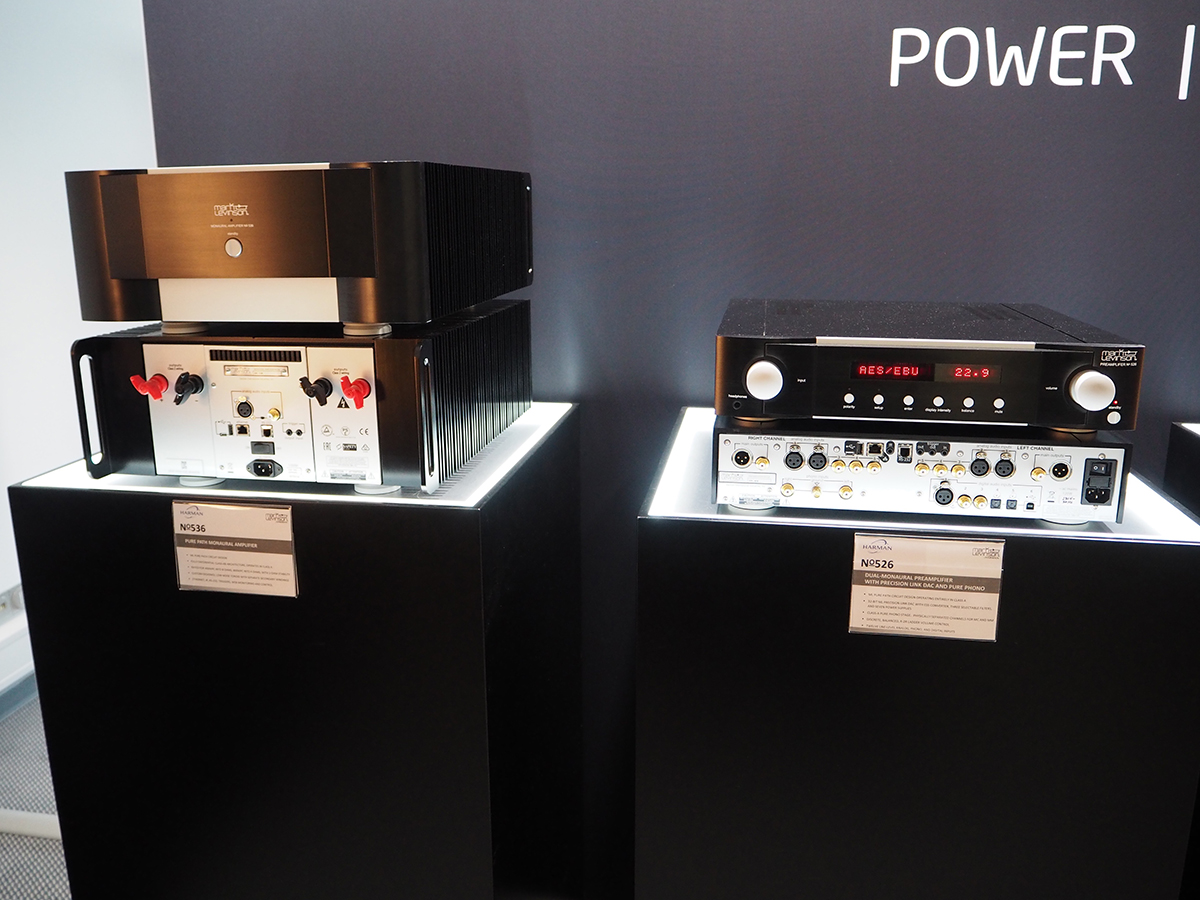 For the 523, Mark Levinson engineers replaced analog potentiometers with the R-2R Ladder circuit architecture. A string of resistors, all with identical resistance (R), form the side of the ladder, with another set of resistors forming the rungs, all identically with double the resistance (2R). An R-2R Ladder is a highly accurate device and has no mechanical contacts to wear out. Because the № 523’s R-2R Ladder uses low-value, precision resistors throughout and operates in current-output mode, the bandwidth and transient response of the volume control are almost perfectly ideal and consistent regardless of the volume setting.

System integration connectivity includes Ethernet/IP control, RS-232, USB for monitoring and configuration via web page, plus DC triggers and an IR input. An included machined metal remote delivers the robust feel and precise control befitting of a component of the preamplifier’s caliber. 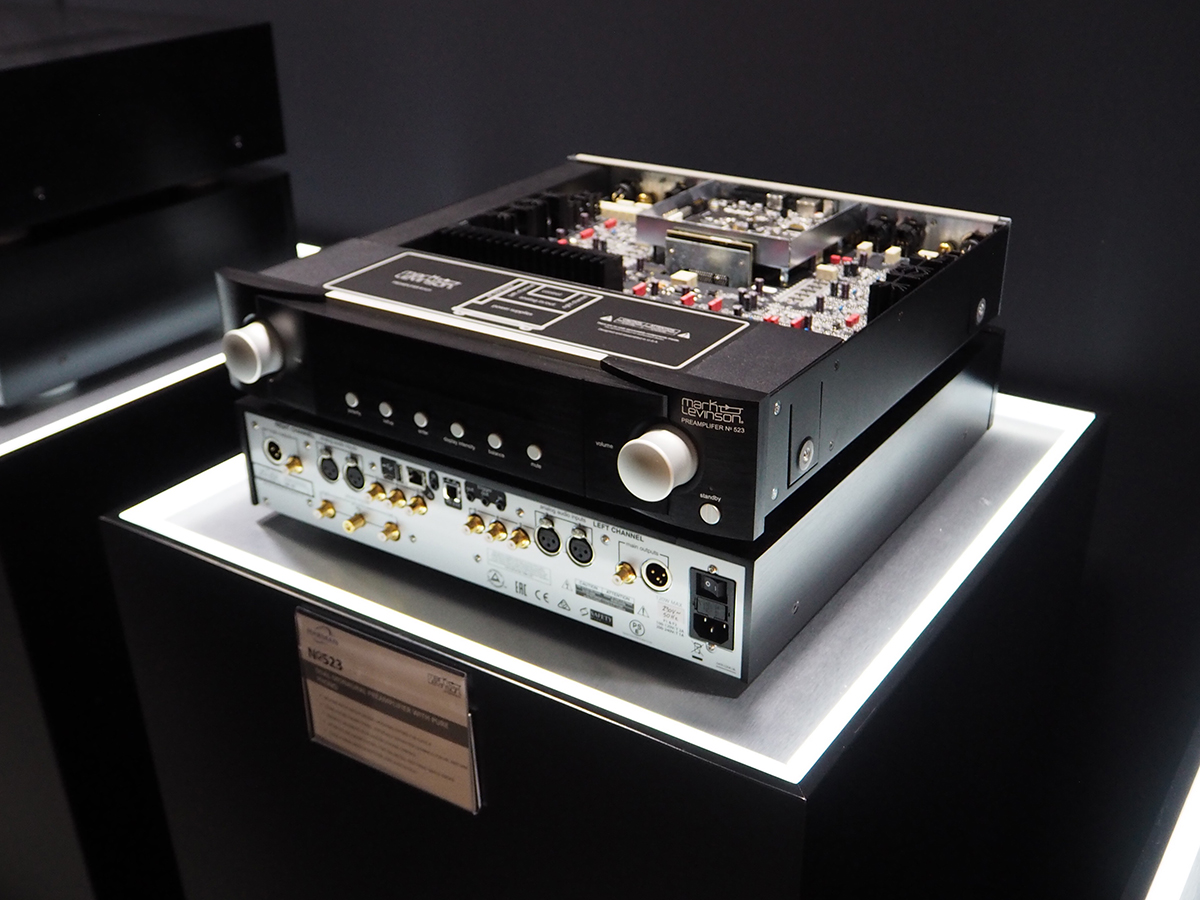 The 526 offers connectivity to accommodate all analog and digital music sources. Its ultra low-noise phono stage accommodates low-output moving-coil as well as moving-magnet cartridges and has selectable gain and resistive and capacitive loading settings as well as a selectable high-pass filter for reducing infrasonic rumble. The 526 also has two balanced analog and three single-ended analog audio inputs. It offers high-resolution digital decoding up to 24-bit, 192kHz from PCM and double-speed DSD. Its DAC incorporates an ESS Sabre32 Reference converter for the six digital audio inputs including asynchronous USB, AES/EBU balanced, Toslink optical and coaxial. The 526 provides both balanced and single-ended analog outputs, which can be configured with optional low-pass filtering for integration of subwoofers. Adding to its versatility, the № 526 features a front-panel headphone output with the ability to directly drive high-performance headphones.

Mark Levinson audio source
Also previewed at CES 2016 and now officially launched at the High End show - scheduled to be available in July 2016 - was the new Mark Levinson 519 Audio Player, a versatile ultrahigh-end source component designed to accommodate every digital audio format. The 519 has the ability to play back virtually any audio format from streaming music services to networked storage, to CD to high-resolution digital inputs and even convenient Bluetooth wireless. In addition, it includes high-performance headphone connectivity and integrated digital volume control allowing it to serve as a fully integrated digital music source. 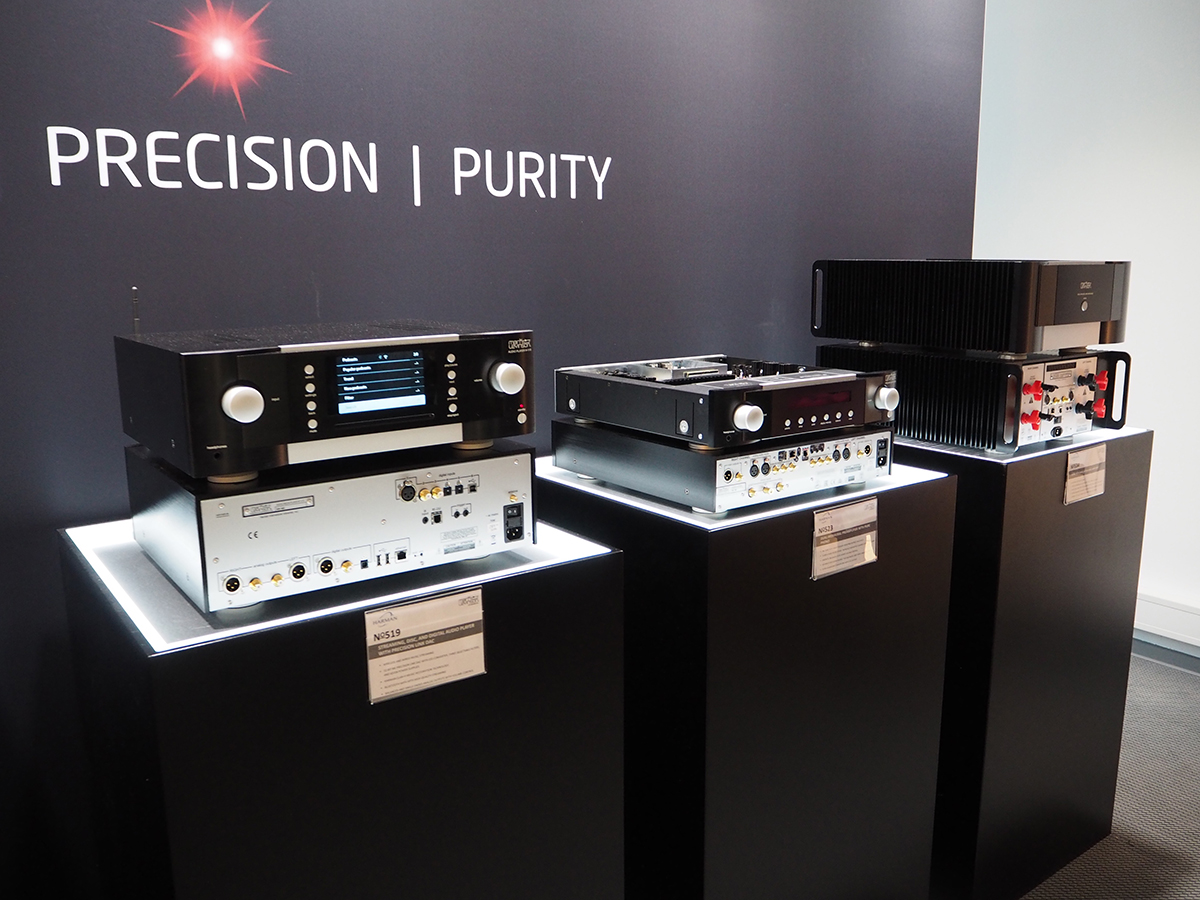