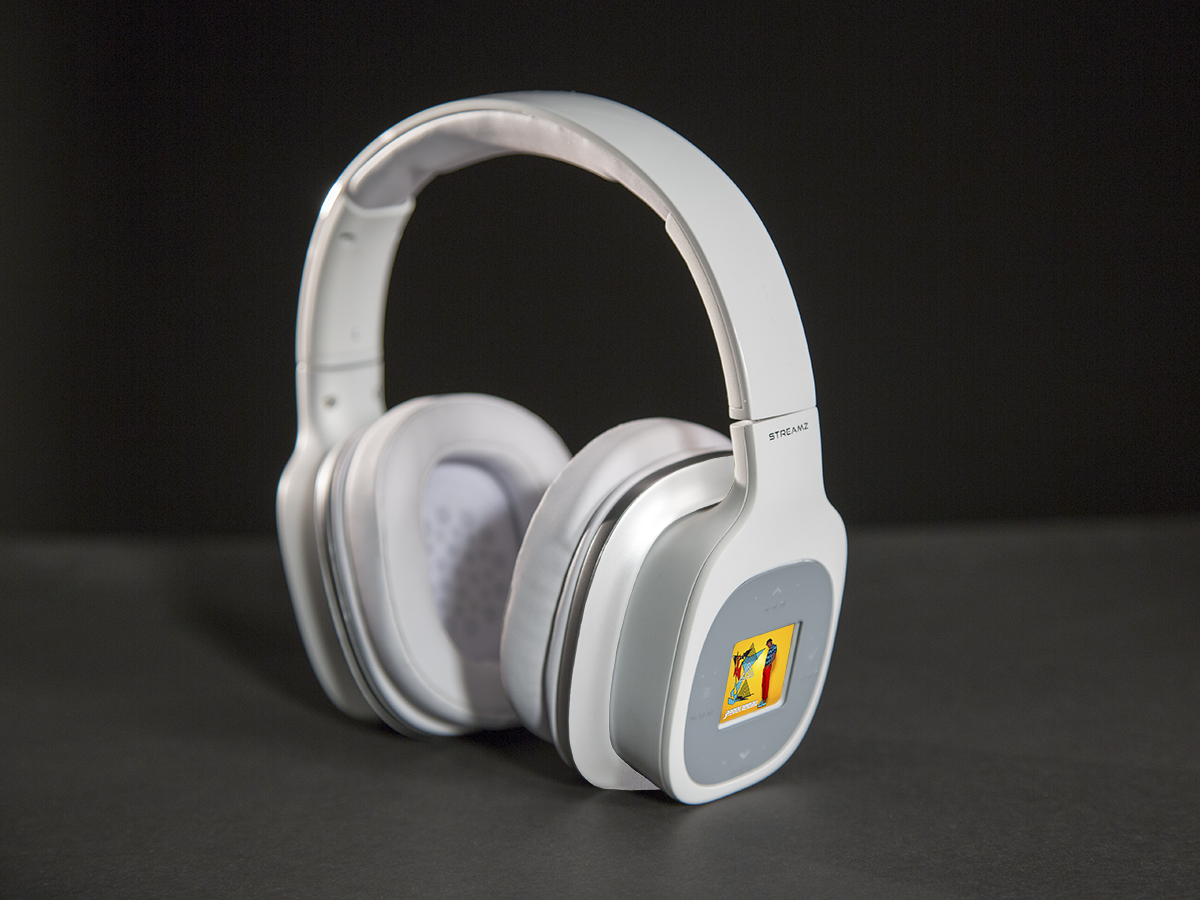 Streamz is promoting "the world’s first voice controlled smart headphones that play stored and online music without the use of a smartphone" - and now also features voice control. The idea was launched on Kickstarter June 12, 2017, but in reality it has been some time in the works. In fact, the Streamz team has been around since 2010, when they promoted the Bluwavs 7.1 Surround Heapdhone and didn't make it, but they started immediately working on the Streamz concept in 2013.

Inside the Streamz there's basically a 1.6 GHz Quad-core ARM processor running Android, supporting Wi-Fi streaming, a built-in music player, and a color display. As an extra selling argument, its built-in player can support hi-res audio formats, aside from being able to stream music from multiple online streaming services including Pandora, Spotify and others, without being connected to a smartphone. To keep the asking price lower, Streamz comes with only 4GB of internal memory, but it is expandable with an SDXC Card up to 256GB. Not a lot, if you store uncompressed high-quality WAV files, but still enough for a nice FLAC playlist.

The Streamz concept seems to be an ambitious undertaking, while at the same ignoring all current consumer trends, including the fact that consumers already understood that managing huge libraries of "precious" digital files and transferring them to a portable device is not that convenient, while at the same time smartphones are getting much better at doing audio, including using latest-generation high-end DA converters.

Still, Streamz have done some "reverse-thinking" and tried to avoid the limitations of standard Bluetooth ((no pairing, low quality or phone call interruptions), and target directly the potential of integrating Wi-Fi capabilities and a built-in 24-bit/96kHz DAC inside the headphones (an ESS Sabre ES9023). And since they needed a small computer to do that, while not implement a dedicated player as well? One that could play the absolute highest quality music available in the market today including FLAC, AIFF, WAV and HD music from PONO and other online HD music stores... directly to our ears? 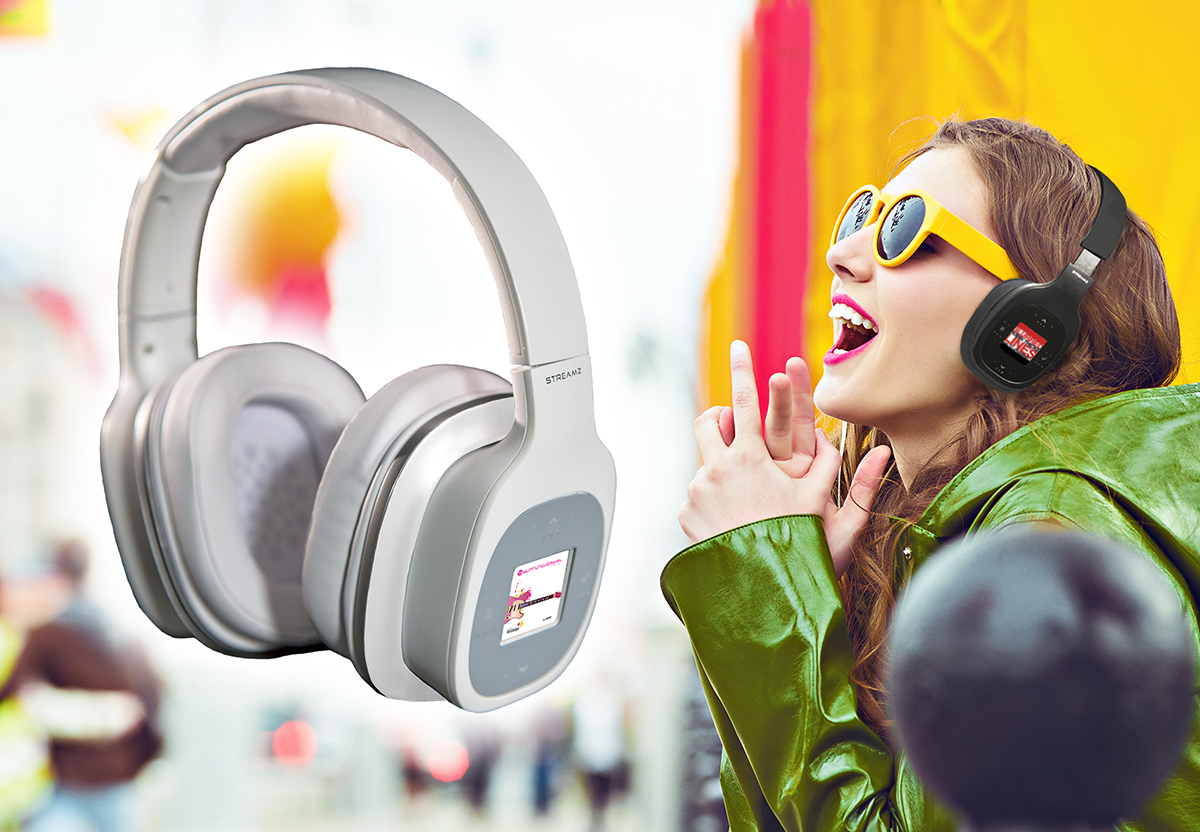 Of course, Streamz also plays standard formats including MP3, AAC, audiobooks and Podcasts, and by supporting Wi-Fi it also allows users to stream higher quality music over a range of 100 meters, which is over three times greater than Bluetooth's current range... And since there's built-in Wi-Fi and an internal computer, there's no reason for Streamz headphones to ever become obsolete. As the company explains, "Unlike traditional headphones, Streamz will be periodically updated with new online App features, thereby making them obsolescent (sic) proof."

But since the project took a few showings at CES to promote it, and over the years also the trends have changed and available development platforms gained more features, Streamz decided to implement voice control, which they call “VOXXI” - also the trigger word. According to their Kickstarter campaign page, the voice control part is the only key development still being perfected.

All because "no one want's to mess around with their smartphones" for listening to music, right? While you can simply select a song, album or range directly in the tactile controls and built-in 128 X 128 pixel color OLED display on the side of the Streamz headphones - and proudly show the cover art to your friends while you're listening - voice control offers a simple and safe alternative to listening with sight and hands free while biking, jogging or just hanging out.

Still, just in case you have a smartphone around, Streamz implemented a unique Auto-Sync feature that makes managing and listening to music incredibly easy by automatically and wirelessly transferring music that a user has saved on their iOS or Android smartphone, MAC or Windows PC onto Streamz via Google Drive’s cloud based storage service.

As Douglas Kihm, CEO and founder explains, “Most music lovers, audiophiles, commuters and athletes just want to listen to their music without having to mess with their smartphone, apps, cables and Bluetooth pairing. We’ve created a solution that provides you complete freedom to instantly and easily listen to online streaming and HD quality music without the need for a separate phone or music player.”

Not yet satisfied with the degree of innovation - and because no one knows what will be the killer selling argument for these things will be - Streamz also implemented a unique 10 band Equalizer (EQ) that allows users to adjust their preferred audio frequencies and personalize their listening experience (no need for Harman target response curves here...). Of course, to do that users will need an app running on a smartphone - a minor inconvenience - but once you've done it, it's set and the user can finally enjoy the freedom of just using their Streamz headphones. 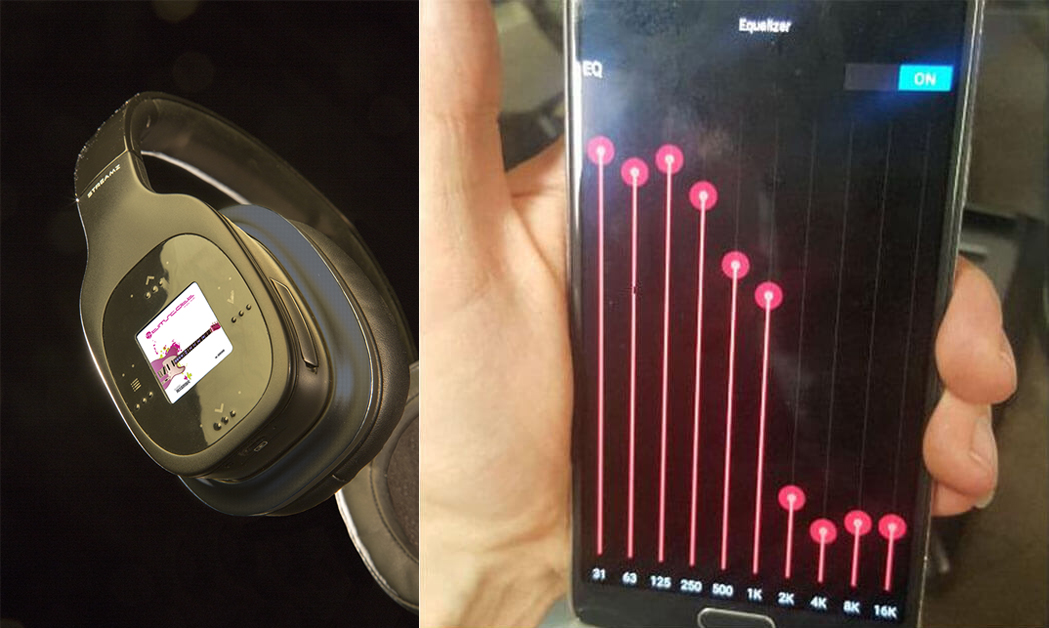 Finally (we think), even though Streamz have been designed for mobile use, since there's a built-in player and computer inside the headphones - and of course there's a rechargeable battery powerful enough to drive the whole system, including Wi-Fi and a display - the company decided also to add an analog out 3.5mm jack, in case you want to listen to music on your desktop or home, and you are too tired of wearing it on your head. When placed in the optional headphone stand, users will be able to enjoy "a complete voice controlled home or office HD quality stereo system by attaching them to an amplified stereo speaker system or an Audio Video Receiver." There's even an audio input jack to connect an external source, in case you want to listen to your old CDs or tapes.

Additional info from Streamz includes the over-ear leather cushions, which should make the headphones "extremely comfortable," if you don't mind the extra weight. Considering all the built-in technology, it's important to highlight that the reported weight stands at only 13 ounces (368 grams) - that's a little more than a conventional high-end headphone, but still less heavy than Audeze LCD headphones. According to the company, the Streamz will initially be available in black and white with more colors to be considered (no rose gold, since this is an Android player after all.) The integrated rechargeable lithium polymer battery should run at least 6 hours and we assume it's already included in the reported 13 ounces.

Streamz is now on Kickstarter, starting with an early bird price of $199.00 (no storage card), but still a bargain, considering the estimated MSRP will be priced at $449.00. Shipping should begin in September 2017. Unfortunately, judging from the campaign status with just a few days to go, it doesn't seem they're going to make it. But maybe with all this development experience the Streamz engineering team will be quickly hired by one of the big names.
www.streamzmedia.com
related items