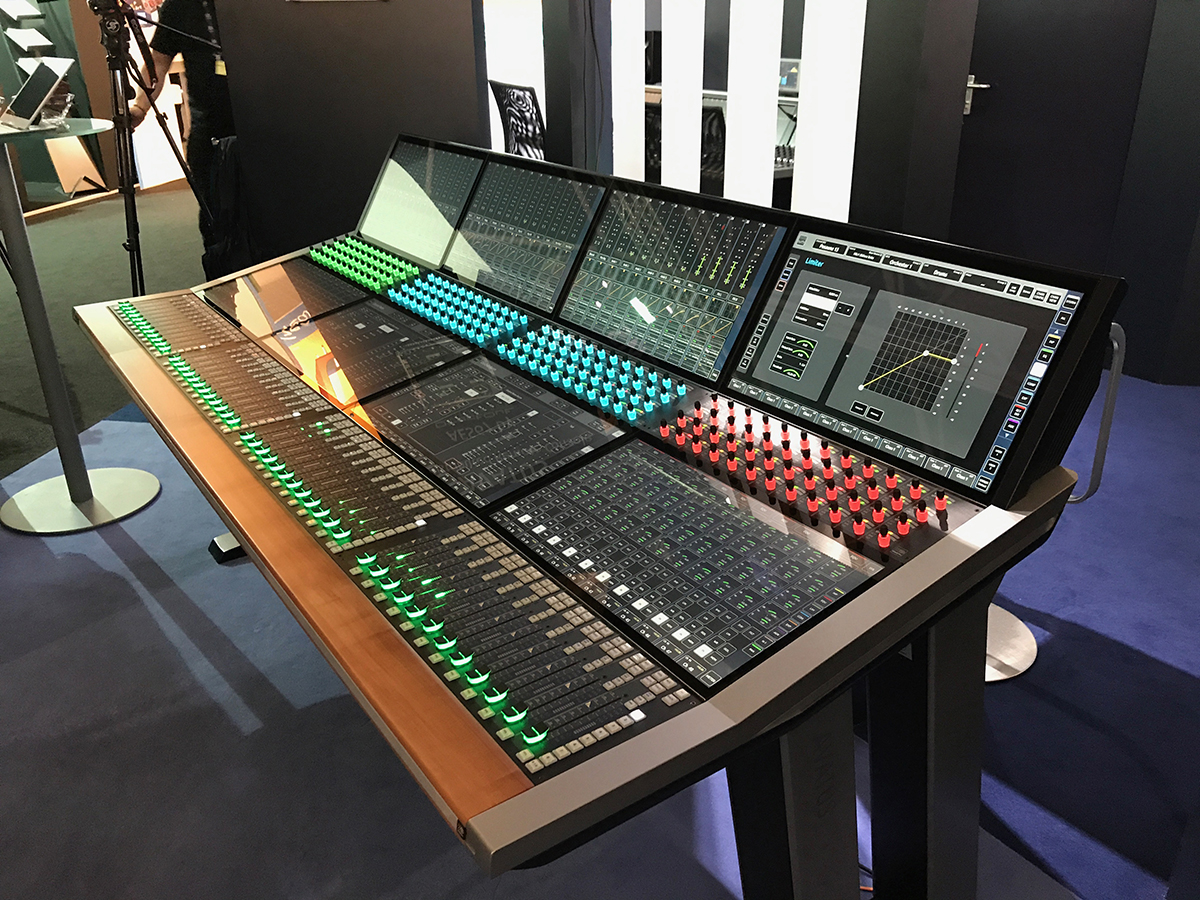 "We have developed our AVATUS mixing console concept to meet our customers' requirements for IP-based technology, open to standard protocols. In line with their wishes, the AVATUS is extremely flexible. Customization of the user interface and its features has been greatly simplified, enabling AVATUS to be adapted individually to each customer's requirements in the broadcast, theater and live entertainment fields," comments Helmut Jahne, StageTec managing director.

With the AVATUS, IP-based connections provide new possibilities for the development of infrastructures. The term “mixing console control surface” is completely redefined. Where previously modules were arranged relatively rigidly, in AVATUS each module is a network node. Each component recognizes its position in the mixing console and is configured and supplied with parameters accordingly. The modules can be removed from the surface, freely configured and installed anywhere within the network at any location. This creates a distributed system, which enables remote productions.

The AVATUS control surface will consist of just three different types of modules. There will no longer be a centre section, enabling multiple users to operate a console from different locations. The decentralized operating principle is supported by multi-touch screens, each of which allows access to all audio processing parameters and central functions. A new UI/UX design has been developed for the multi-touch screens, to ensure convenient user operation, while a web-based Remote UI allows for display and operation of parameters via a web browser.

The color coding is the immediate way for the operator to identify the current configuration for each module. The color coding in each LED-illuminated rotary encoder and faders, indicates the current function and provides a quick overview of the console for large projects. The control surface itself physically supports between 12 and 96 control strips.

In terms of I/O, the AVATUS console provides more than 800 input channels and 128 sum buses. The channel format width ranges from mono to 7.1. Features such as the de-esser, implemented as an audio channel module, loudness metering and the StageTec automixer are integrated. Like all StageTec consoles, the AVATUS is integrated into a NEXUS audio network rack, and offers a wide range of interfaces already available. 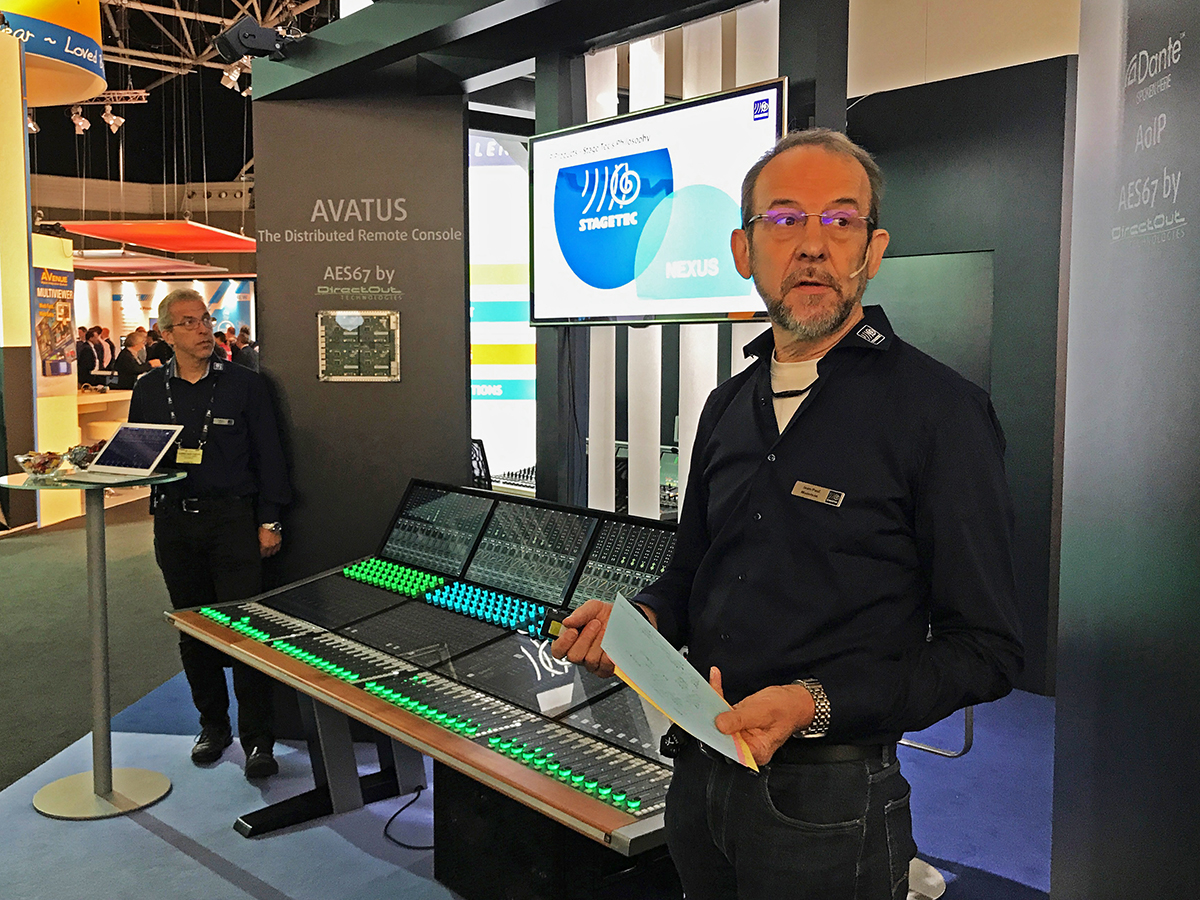 According to StageTec, the AVATUS was designed as the company's first attempt to create a new-generation mixing console totally based on standard technologies and protocols, increasing the possibilities for control and integration of external devices. Apart from supporting audio-over-IP according to the AES67 standard, StageTec stated that connectivity to and from other systems will be further enhanced by implementing also the new AES70 standard.

"With its flexibility, the new console has the potential to face future challenges. AVATUS continues the tradition of StageTEC products and is backwards compatible. Users with an AURUS in a NEXUS audio network can make a gradual progression to AVATUS. AVATUS is still in the pre-production model phase, and the developers still have to navigate several pitfalls until it becomes as reliable as other StageTec products. The first production version of AVATUS will be available in 2018."

"There is a period of upheaval in the industry. Just as in the transition from analogue to digital technology when the basic concepts of mixing consoles and control systems were changed completely, we now see this through IP networking and the development towards remote productions," states Helmut Jahne. "The near future will be exciting!" 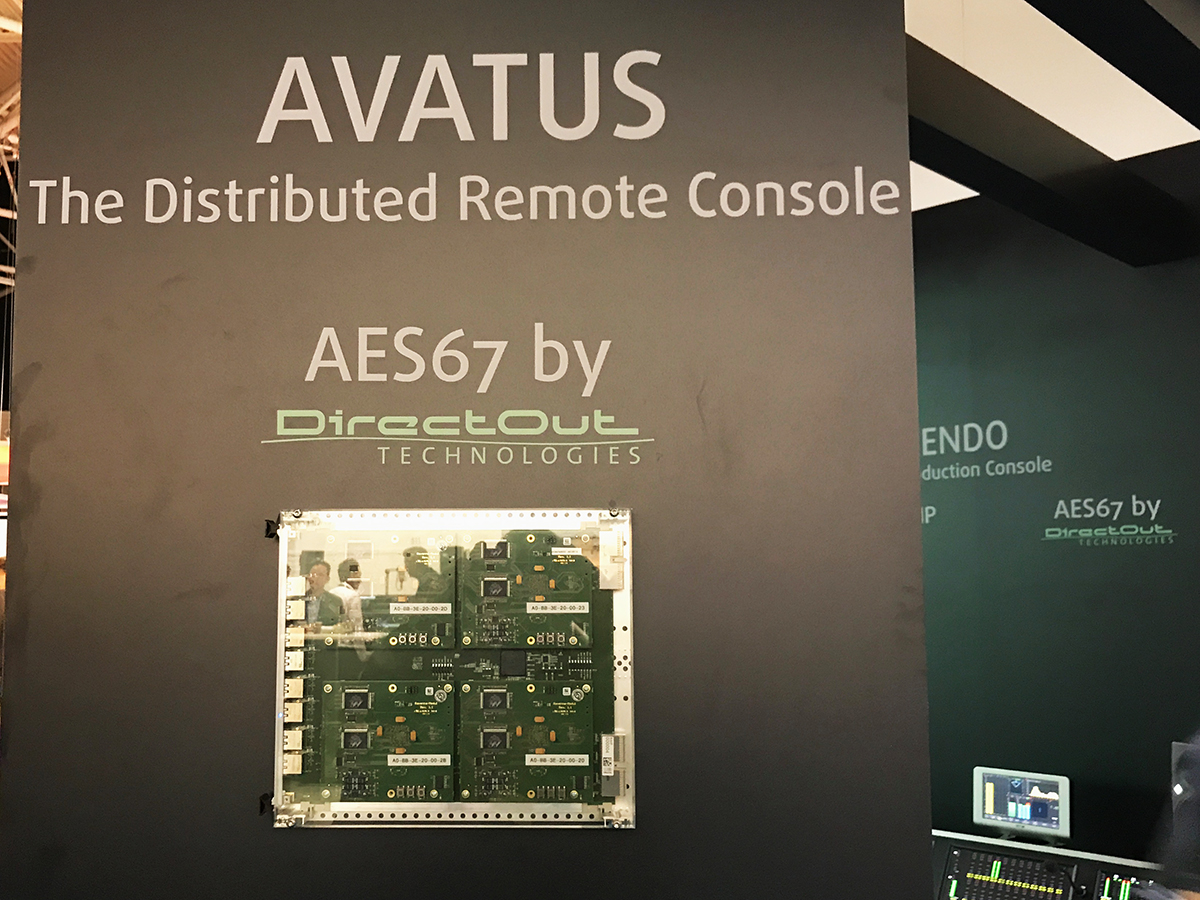 Cooperation with DirectOut
Directly supporting the AVATUS and other systems from StageTec, the company introduced also at IBC 2017 the latest NEXUS interface board: the Router InterFace AES67 (RIF67). This expansion board for the NEXUS STAR is the first result of cooperation with another German company, DirectOut Technologies, which was only agreed this same year, at Prolight+Sound 2017, in April.

The DirectOut AES67.IO module has a full AES67 implementation and supports non-proprietary audio and control networking, enabling powerful solutionsvia an audio over IP connection. The RIF67 can send and receive up to 1024 AES67 audio channels. It supports up to 128 streams in each direction. The module provides a capacity of 256 channels in the router. It can manage up to four physically separate IP networks per board.

"I am delighted that we have already been able to demonstrate a result of our joint undertaking with DirectOut," explains Jahne. "By developing the RIF67 router board, StageTec is following recommendations for the standards-based AIMS roadmap with the objective of SMPTE ST 2110."

Redundant audio transmission according to SMPTE 2022-7 is also planned. RIF67 is configured using a web interface, with status monitoring via NEXUS. The RIF67 is plug-and-play which means that networks detect and configure it for use automatically. Like all StageTec products, the RIF67 is backwards compatible and can also be used in legacy NEXUS systems. StageTec has been offering IP-based equipment with the NEXUS XDIP Dante board since 2012. The XDIP supports up to 64 bidirectional audio channels and is also compatible with AES67.

The new RIF67 board will debut in a new, fully IP-based UHD-1 outside broadcast truck belonging to Swiss broadcaster and TV service provider tpc. The RIF67 cards will be available from spring 2018 onwards.
www.stagetec.com | www.directout.eu
related items