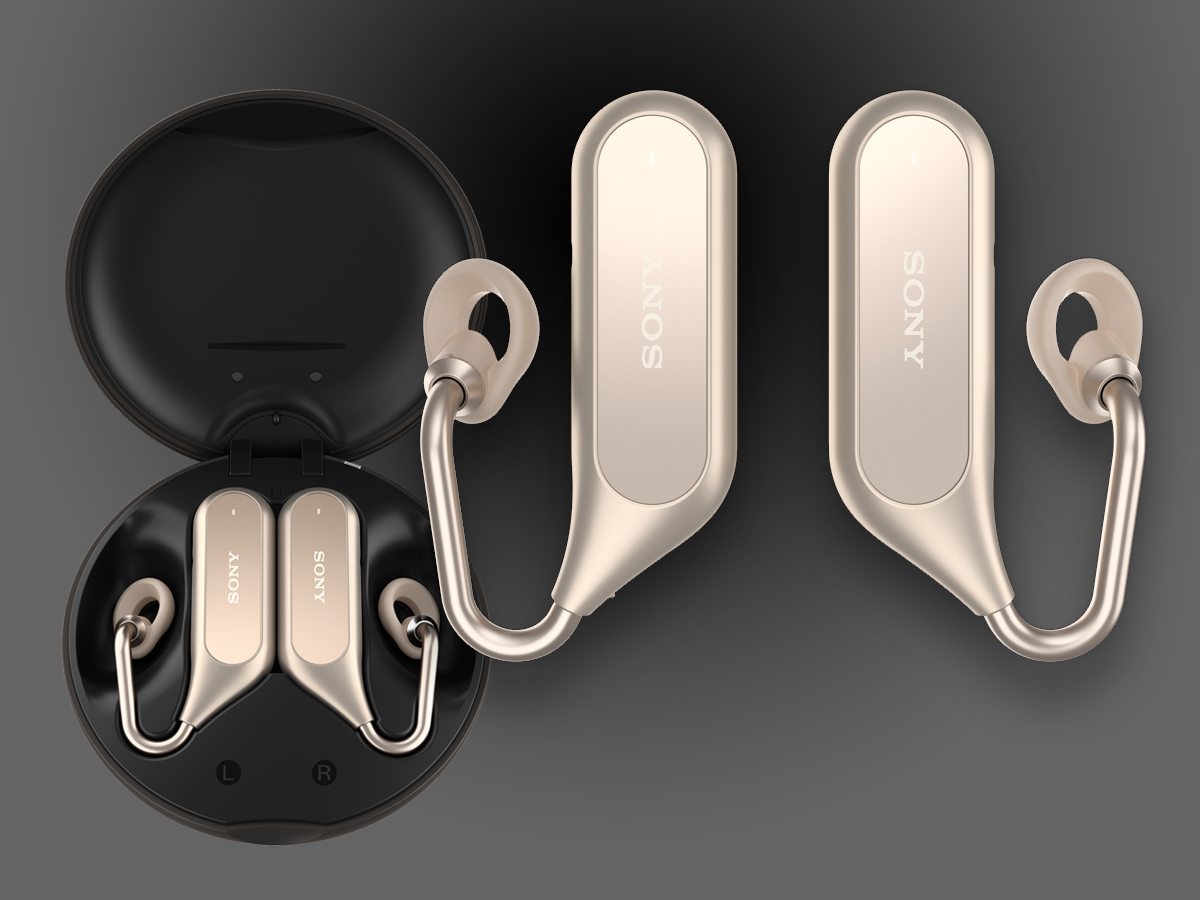 During Mobile World Congress 2018, Sony was showing a completely new concept for wired and wireless earphones, introducing an "open ear" design, with the drivers and electronics contained on a back-of-pinna unit (resembling a hearing device), and the sound simply conducted on a tube to the users ear, ending on a soft silicon/rubber ring that sits comfortably on the outer ear. The result provides very little passive isolation while still allowing music listening, even if not with the full extended range normally provided by conventional in-ear earphones. But the concept focuses precisely on the balanced "environmental awareness".

“Xperia Ear Duo represents what we’ve learned from audio and acoustics research” says Hiroshi Ito, Deputy Head of Smart Product Business Group at Sony Mobile Communications. “Ear Duo is the first wireless headset to deliver a breakthrough Dual Listening experience – the ability to hear music and notifications simultaneously with sounds from the world around you.” 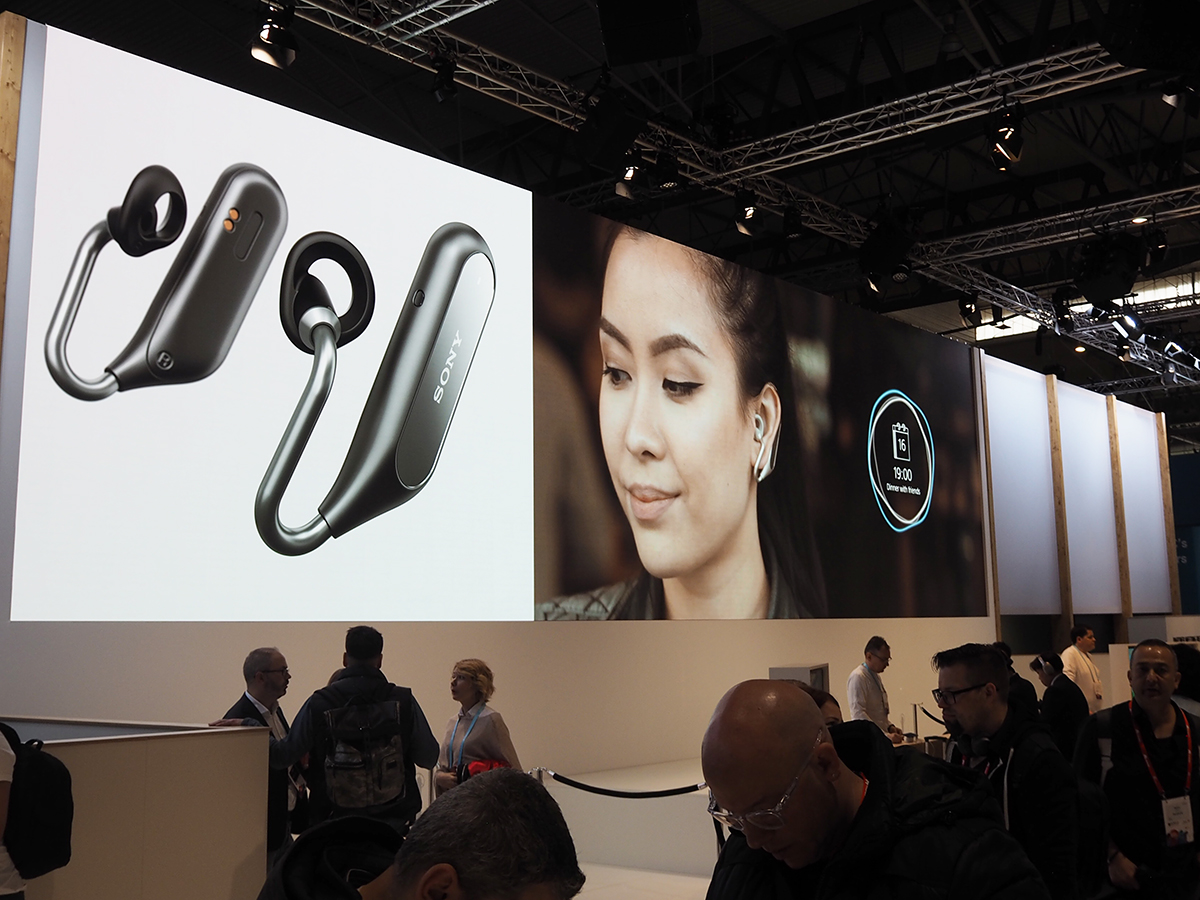 The new Xperia Ear Duo earphones feature Dual Listening technology, so users can listen to music and receive notifications, whilst simultaneously hearing environmental sound or conversation. The Spatial Acoustic Conductor, developed by Sony’s in-house technology incubator Future Lab Program, allows the sound generated behind the ear by the unit´s driver to be transmitted directly into the ear. The specially designed ring supporter surrounds the ear canal so the music can blend seamlessly with sounds from the user's environment.

The volume intelligently adjusts based on the surroundings and background noise, with Sony’s Clear Phase audio technology eliminating sound dispersion. This is driven by Sony’s ultra-low power consuming “CXD5602” chip and a sophisticated multi-sensor platform, the “Daily Assist2” feature, which the company says it will recognize time, location and activities to offer relevant information throughout the day – reminding users of the time for a meeting when reaching the office or narrating the latest news headlines. 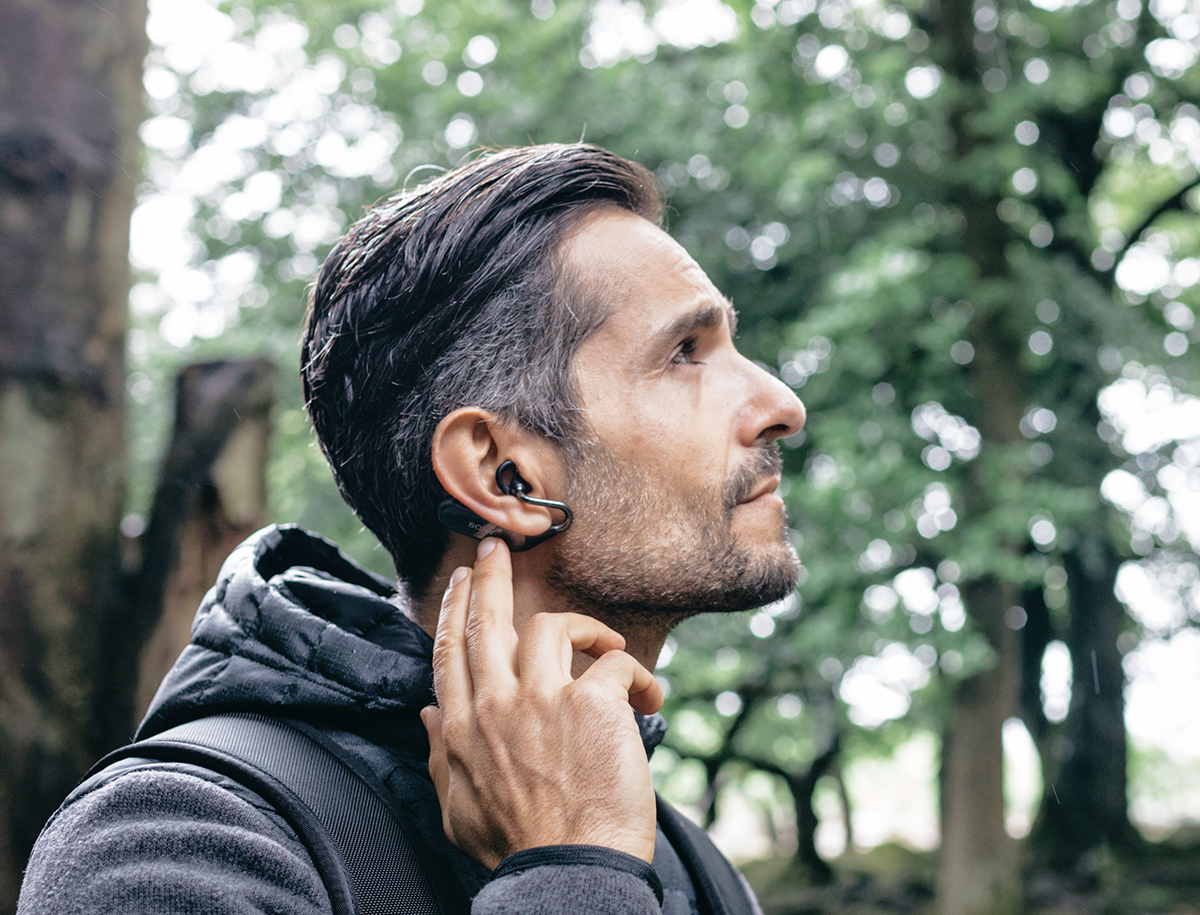 The Xperia Ear Duo also responds to head gestures – the advanced sensors allow users to answer or decline incoming calls by shaking or nodding their head, or skip through music by shaking the head left and right. Users can also control music and volume by simply tapping and scrolling on the back of the device.

Voice control is also built in with flexible access to the personal assistants like Google Assistant or Apple's Siri. Quad microphone beam-forming isolates the sound of the user's voice, filtering out external noise to help set reminders, send messages, make calls or launch an application, all hands-free.

Made from durable stainless steel and soft rubber, the Xperia Ear Duo sits under the ear to avoid interference with glasses or accessories. The open-ring supporter comes in three different sizes, and IPX2 splash proofing means it’s comfortable enough to wear all day, every day. 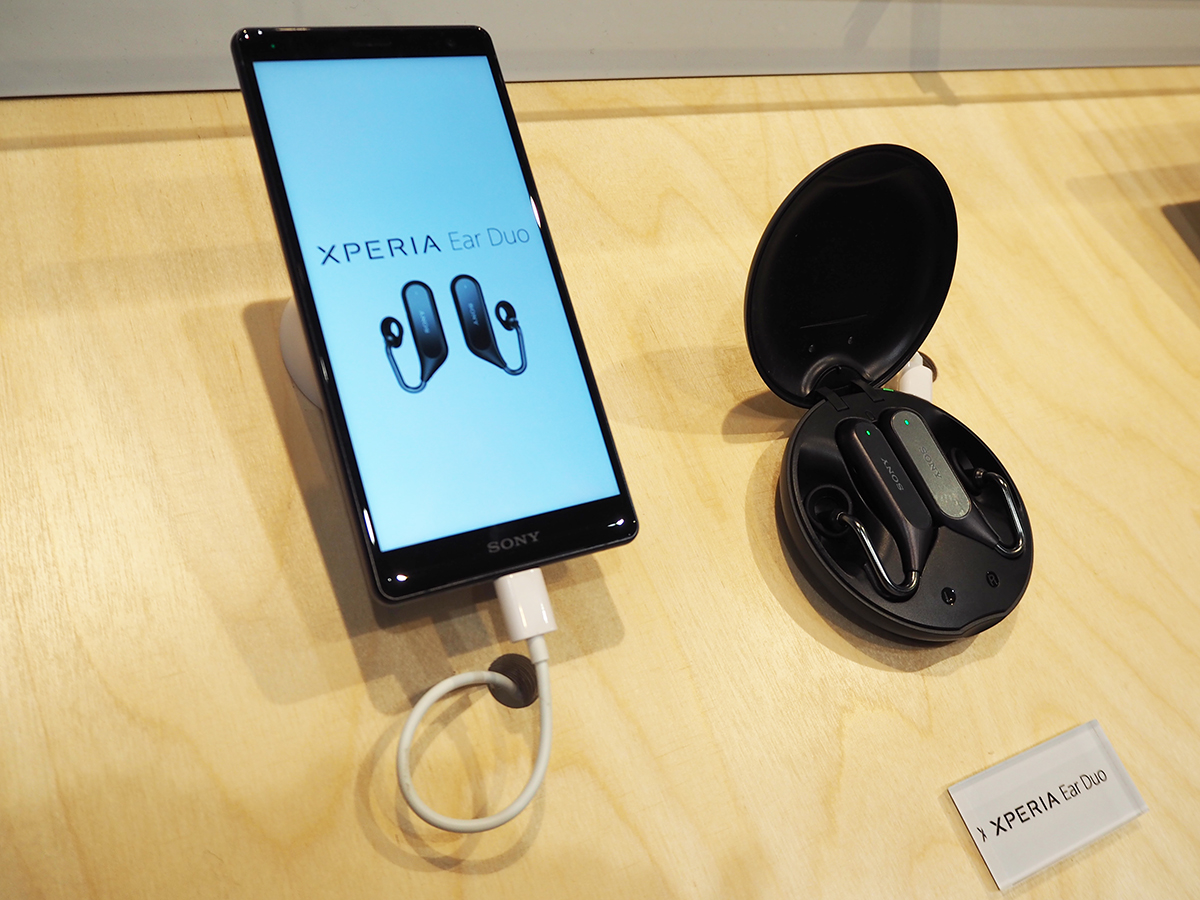 For the truly wireless experience, the Sony the Xperia Ear Duo provides up to four hours of listening on a single charge, with the compact case and charger providing up to three times more power. The case also offers a fast charging feature, giving users one hour of extra listening with just seven minutes of charging. Available in black and gold styles.

The wired version
Together with the Sony Xperia Ear Duo truly wireless stereo model, Sony was also showing a new wired and more affordable model, which follows a similar philosophy and design. The Open-ear Stereo Headset STH40D, allows users to listen to their favorite song and order a coffee, or participate in a conference call and hear the track number for the train with the same dual listening style of the Xperia Ear Duo, in a much lighter version. Fitting comfortably around the ear, the Open-ear Stereo Headset STH40D doesn’t block the user's ear canal, allowing listening to music and the sounds of the surrounding environment simultaneously.

The Sony Open-ear Stereo Headset STH40D features an easy access remote control to manage music and calls with simple multi-function keys on the wire. Plus, once the user activated voice controls at the touch of a button, it allows interaction with Google Assistant or Siri. The design fits comfortably around the ear - after we learn how to place it correctly - and is so small and lightweight that we will forget we are even wearing it. Of course the sound is bass-poor and it sound thin until we press it against the ear, which in a normal usage situation means that users will be forced to increase the volume on their player or smartphone. So, clearly not for enthusiasts of high fidelity and total music immersion. 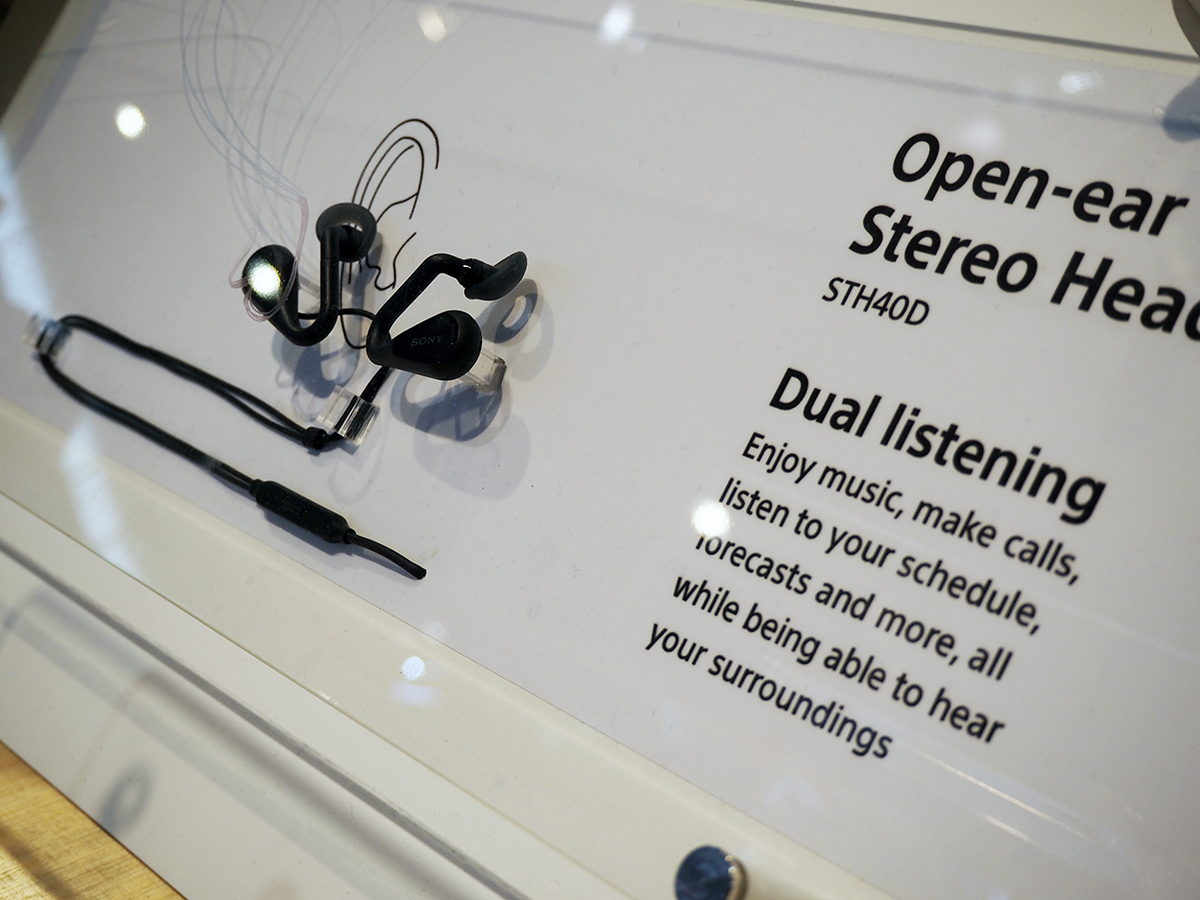 In compensation, Sony offers a nice selection of colors that complement the latest Xperia smartphones, in grey, green, black and pink and a safety carrying pouch is included.

Both the Sony Xperia Ear Duo and the Sony Open-ear Stereo Headset STH40D roll out from Spring 2018, and the companion application will be available for free download at the Google Play Store and Apple App Store.
www.sonymobile.com
related items