Solid State Logic has taken a leading role in the successful broadcast trials at the European Championships athletics competition in Berlin. The event was a major step forward for both Next Generation Audio (NGA), and Ultra High Definition (UHD) and High Frame Rate (HFR) video.

The trials covered two track and field events each day for four days in August 2018. A number of broadcast engineers were invited to take the helm and mix individual events, producing immersive 7.0.4 beds and four object channels: English and French commentary, and English and French Audio Description.

Field sources were a combination of the Schoeps ORTF-3D microphone (4.0.4), mh acoustics' 32 element em32 Eigenmike array, plus a variety of spot, crowd, and ambient microphones (both mono and stereo). The SSL System T environment consisted of the new 32-fader S300 control surface and the T25 Tempest Audio Engine.

To cope with the high channel counts and complex routing requirements, SSL Network I/O was deployed, alongside Dante AoIP I/O from other manufacturers, including Audinate's own Dante Virtual Soundcard. This was all connected to a redundant CoTs network with two Cisco SG500 and two Cisco SG300 switches, providing a 1024 x 1024 audio routing system.

I/O management, creation of logical devices, and network-wide routing were managed directly from the System T S300 GUI. This meant real channel numbers and varying channel orders could be hidden from the operators, who instead simply routed complete 7.1.4 and 4.0.4 logical devices.

SSL's Tom Knowles, Product Manager – Broadcast Systems, was present at the trials, guiding engineers on System T and its new immersive features. "The operators coped really well," he notes. "It was gratifying to see them get to grips with the console, the routing, and the NGA features so quickly. We weren't telling people how to mix, we were facilitating their preferences.

"With the mix of sources and formats we were dealing with, the console's 3D panner was essential. It was instrumental in building the ambient beds and moving a big variety of source material in the 3D space without having to use aux channels for height, for example.

"It was a great pleasure collaborating with all the companies involved this event. On the audio side, we worked directly with B-com, Dolby, EBU, Fraunhofer IIS, Junger, and Qualcomm to prove that we are already delivering immersive, next generation audio." 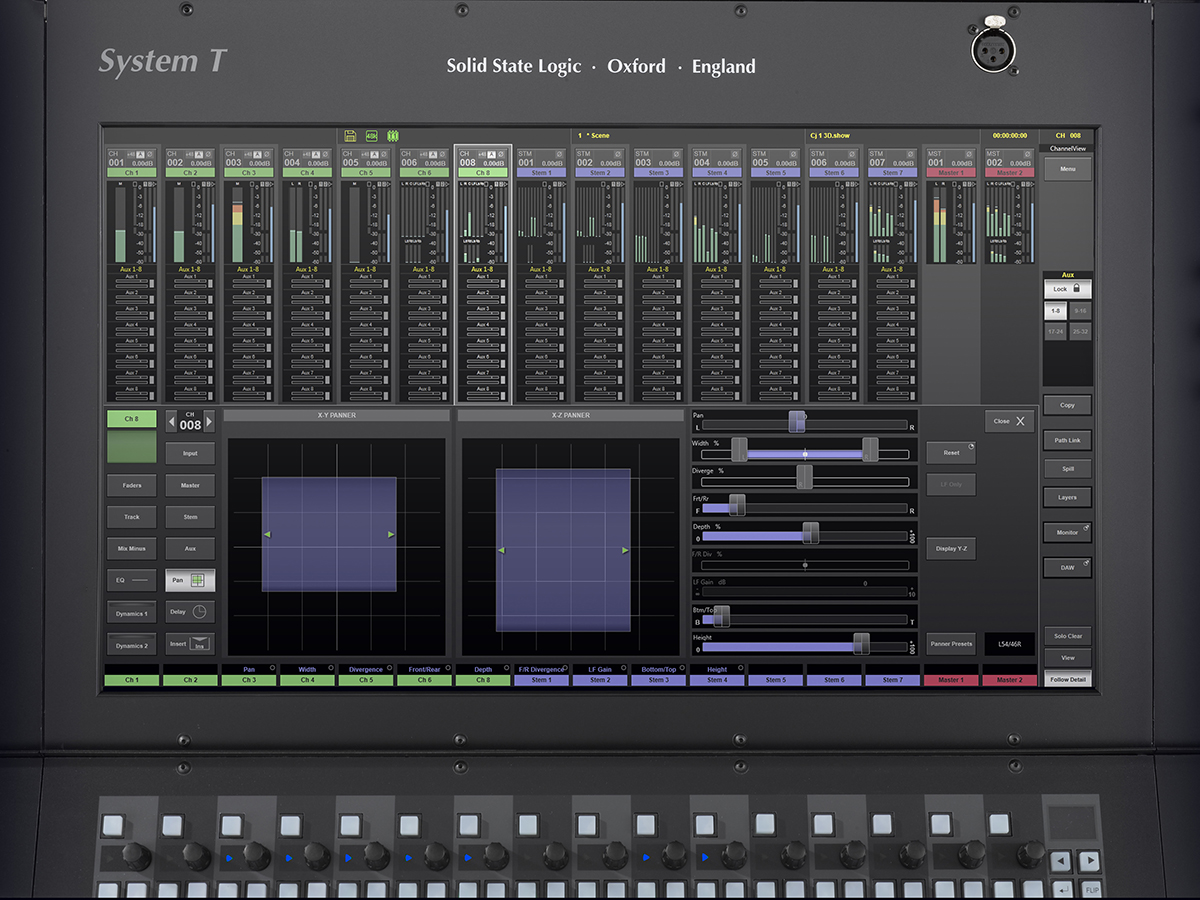 SSL responded to broadcaster demand with a major new feature set that places support of immersive audio for ATSC 3.0, Dolby Atmos, and MPEG-H at the heart of the System T's software architecture.

With the emergence of 3D Immersive Audio in broadcast as well as in film, SSL’s new 3-axis co-ordinate panning for System T incorporates 2- or 4-channel overhead speakers into the available channel and bus formats. As well as positioning mono and stereo sources in a 3D sound field, System T can accept multichannel 3D sources and fine tune their spatial components as they are added to the final production mix. This is essential in multilingual sports productions where effects and ambience multichannel 3D ‘beds’ will be used extensively as the basis of the individual program mixes.

Supported formats include 5.1.2 and 5.1.4, 7.1.2 and 7.1.4 (with side channels as well as rear channels). A novel 4.0.4 format designed primarily for beds and stems ensures that the centre channel remains exclusively available for dialogue and commentary. The 4.0.4 format is also ideal for the output of the new generation of VR mics that capture a 4-channel ambisonics scene representation. This can then be rendered in a multichannel format for incorporation into an ‘object/bed’ based immersive mix.

Intelligent downmixing means that conventional 5.1, stereo, and mono mixes can be created simply by routing a 3D channel or stem to a suitably formatted master bus. Downmix coefficient control of the overhead (top) to floor (bottom) mix and the side channels to front and rear, permits user adjustment of the system derived defaults. An elegant unified approach to divergence processing eliminates the complexity often found in the panning solutions offered on workstations and other digital consoles, which require multiple parameters to determine the balance between the discrete and phantom components of the centre and side channel signals.

Partnering the new 3D channel and bus formats is a 12-channel monitoring section. This includes 49 12-channel monitor inputs, configured as a primary monitor input and two 24-channel preselectors, together with a 12-channel AFL monitor bus, and a pair of 12-channel insert points for external processing and rendering engine returns, offering all the monitoring tools required in a 3D production environment. An additional secondary main monitor output allows use of both conventional monitor speakers as well as a secondary sound bar or other domestic style monitor setup for real-world quality checking. A further two stereo Alt outputs can be used for nearfield monitors or for simultaneous secondary program monitoring in multi-language productions. Independent channel level and delay adjustment is available for both main monitor outputs.