In a few short years SSL Live consoles have met widespread praise from many of the world’s leading live engineers and conquered their place on arena tours, at festivals, and in prestigious installations and houses of worship around the world. At Prolight+Sound 2017, SSL is expanding the range with the L200, a new mid-scale console - available now - that makes the outstanding sonic performance, accelerated workflow and advanced feature set of SSL Live available to a much wider audience.

The L200’s unique inverted T chassis design is driven by ergonomic considerations. It keeps all essential console controls within easy reach and brings sprung arm mounted external screens/devices closer to the centre of the console. Arms can be mounted on either or both sides of the console. Arms can be specified as screen mounts or laptop/utility trays. External screens can be used to display the Console Overview screen, Automation screen, or other system devices.

The new L200 also features a row of three 12-channel Fader Tiles, providing a total of 38 faders including the Master and Focus Faders in the Master Tile. A centrally-located 17” multi-gesture touchscreen gives access to all of the consoles’ functions, and combines with Quick Controls in the central Fader tile to provide intuitive, immediate hands on hardware control. The Master Tile, located alongside the screen also provides Mute Group, Solo/Talkback, Assignable keys, and Automation controls. 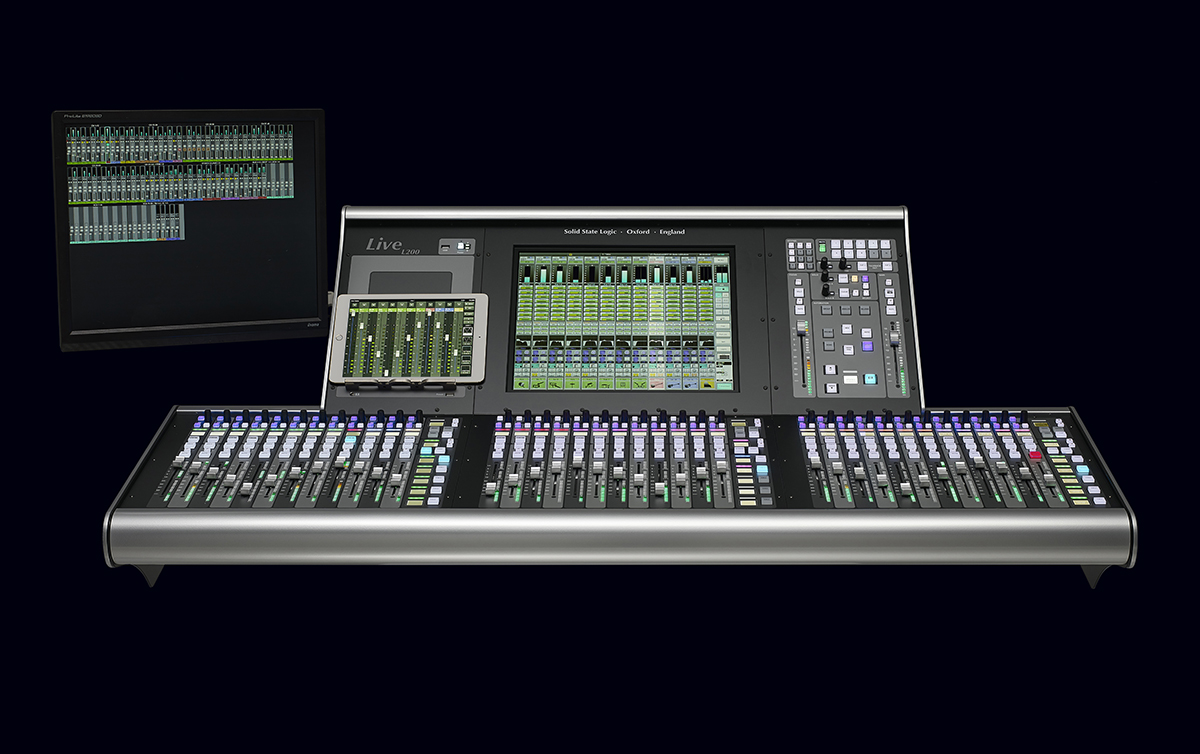 Vital statistics for the new console include 144 processing paths all of which have full processing. These paths can be configured as up to 96 input channels, up to 48 aux sends, up to 24 stem groups and 6 masters. A 4 x 32 input, 24 output Matrix is provided in addition to this. Like all SSL Live consoles, the L200 has a flexible architecture that allows console configuration and surface layout to be easily configured to suit the demands of each production.

Otherwise, the onboard FX processing and FX offers the same wealth of superior quality processing options as the more powerful L300 and L500 models. 48 instances of FX processors are available at any one time on L200. The L200 also features showfile compatibility with L300 and L500 consoles. Showfiles written on any SSL Live console will load directly onto another console in the Live range (within system limitations). SSL’s SOLSA PC app can be used for online control and offline editing.

New Dante Stagebox and More Dante Networking
At Prolight+Sound 2017, Solid State Logic is also announcing new products and developments that clearly demonstrate a fully networked console strategy for live and broadcast applications, as the British company has been promising and implementing.

At Prolight+Sound 2017, SSL is also announcing the BLII-Dante HC Bridge, a 1U unit that provides a bi-directional bridge between SSL’s proprietary ‘Blacklight II’ high bandwidth optical format and a single Dante HC connection, delivering 256 channels of ultra-low latency 96kHz (512 channels @ 48kHz) audio in and out of a Dante network for SSL Live consoles. SSL’s System T broadcast consoles already offer up to 3072 input and output connections to a Dante network via up to six Dante HC cards per Tempest engine delivering 512 channels of I/O per card at 48kHz. 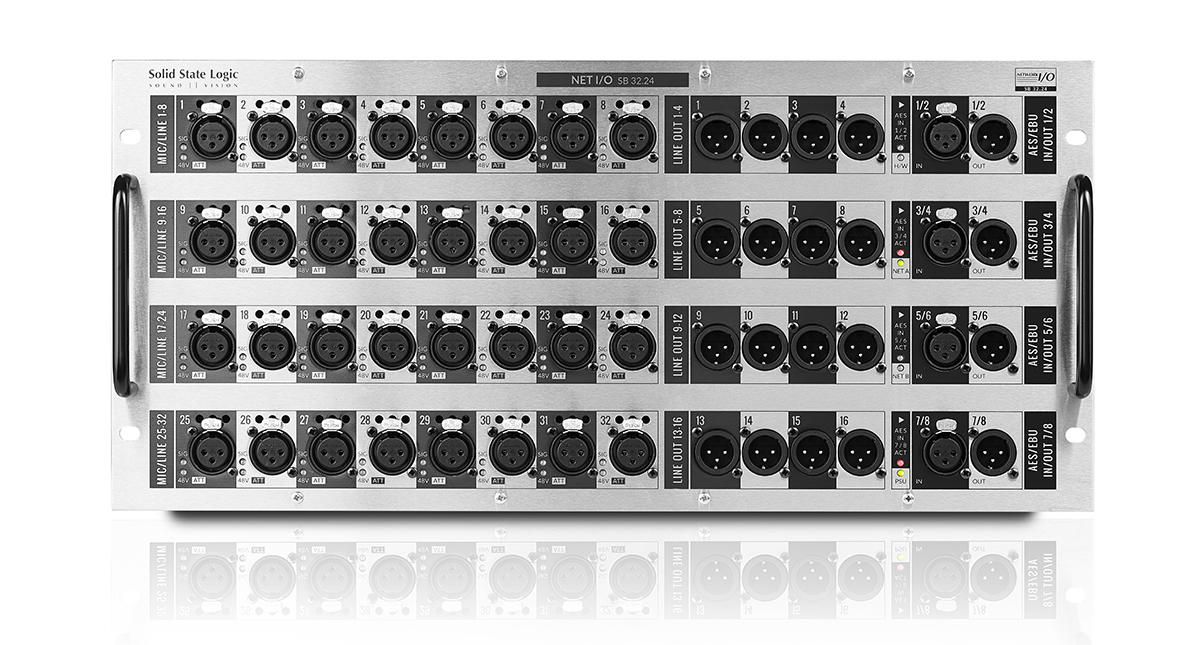 SSL Network I/O Stageboxes offer SSL’s renowned SuperAnalogue preamp design with its superior audio performance available for a wide range of Dante network applications. The Network I/O SB32.24 is a 5U fully ruggedized enclosure featuring dual redundant power supplies, 32 mic/line inputs, 16 analogue line outputs and 8 digital inputs and outputs on 4 AES3 input/output pairs. It has a pair of redundant RJ45 Dante network connections in addition to a user configurable SFP port that can be fitted with RJ45 or optical connectors.

The SB 32.24 has on-board gain-compensated Dante “split” capability, and all network connections can be used for network extension or for connection to a second independent Dante network. It has individual signal present, clip and phantom power LED’s as well as global indication of PSU, Network A and B and Hardware status. The SB32.24 can also operate at 96kHz or 48kHz sample rates. 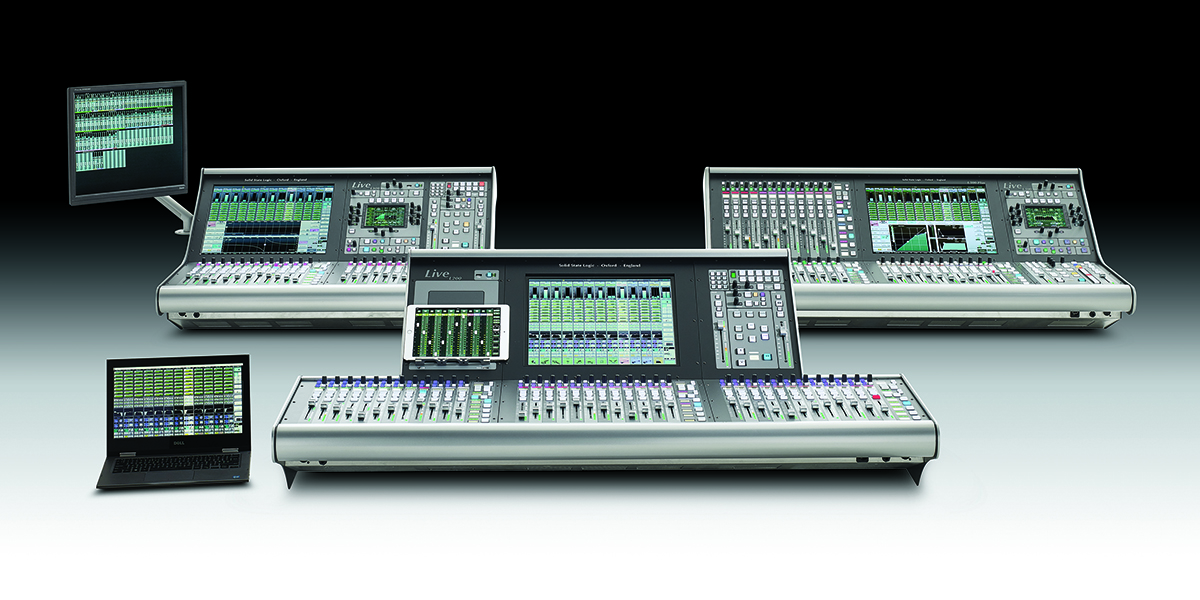 A significant core functionality addition with V4 is the introduction of direct gain compensated I/O sharing for SSL Network I/O Stageboxes. Existing SB 8.8 and SB i16 models and the new SB 32.24 can all now be controlled directly from any SSL Live console and can also be shared between SSL Live and System T broadcast consoles in a single installation.

The features included reflect dialogue with the growing community of Live users. Highlights include; Automation Recall Protect which adds a dedicated Recall Protect button in the Channel view and as a hardware button in the Quick Controls. Recall Protect operates above the Global Recall Filter meaning all Recall scope parameter settings are saved when “Automation Recall Protect” is disengaged.  A new XY Routing page replaces the old Fast Route with a full X/Y routing interface where multiple assignments can be made simultaneously, and there is a one-click option to implement a 1:1 patch.  A powerful four filter sub bass harmonic synthesiser plug-in called SubMonix has been added to the Effects Rack. Showfile creation is now streamlined with a smart CSV import/export feature and auto-renumbering. A new Path Linking feature allows offset compensated adjustment of control parameters across selected channels or across all channels.

V4 will be free to all SSL Live console owners and will be available in May 2017.
www.solidstatelogic.com
related items