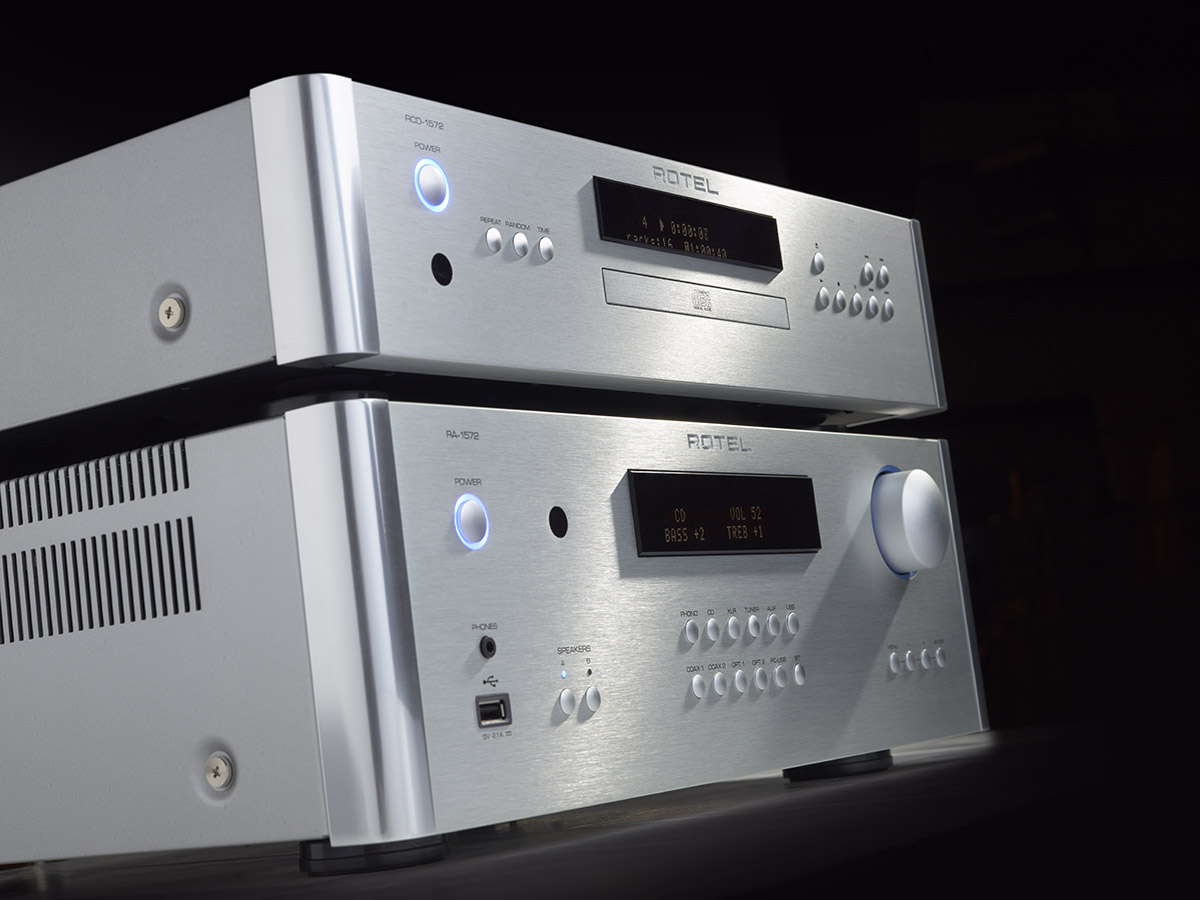 With the market for traditional stereo hifi components shrinking dramatically over the last two decades, manufacturers still designing and regularly introducing new products to market actually need to have strong reasons to differentiate any announcements. Japanese manufacturer Rotel is one of those companies, always recognized by excellent electronic engineering and build quality, and introducing products at reasonable prices. The three new stereo components that are now part of Rotel's 15 Series, introduced in 2009, continue that tradition, with updated specifications that might be exactly what the few remaining clients for those products need.

RA-1572 Integrated Amplifier
Long recognized as a central component in cost-effective music systems, the integrated amplifier’s job has evolved substantially as many music-lovers have migrated to digital sources. The new Rotel RA-1572 (suggested retail USD $1699.00) is one of the best examples of melding classic analog design with contemporary digital circuits to bring all sources to life with surpassing fidelity. 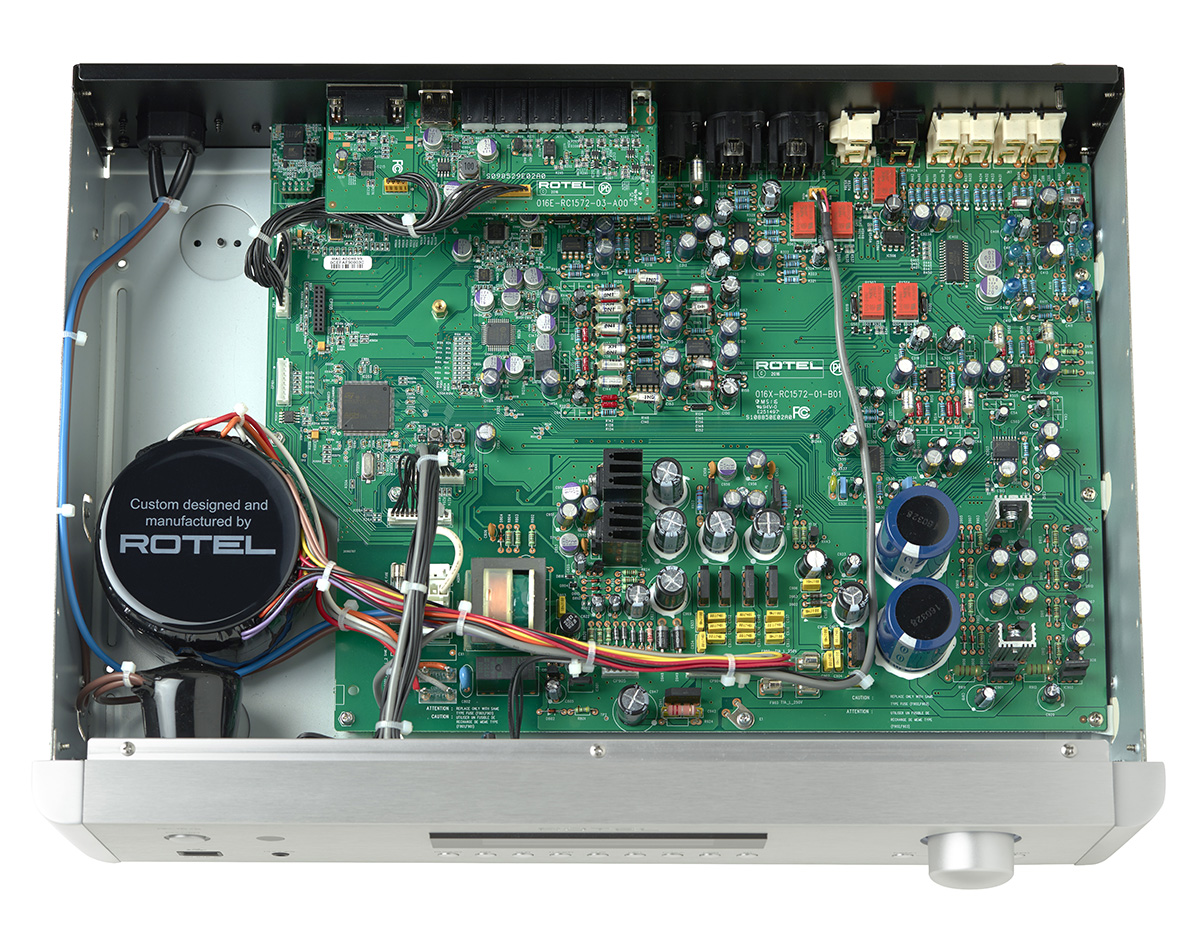 As typical of Rotel amplifiers, the RA-1572’s circuitry draws on a high capacity power supply based on a Rotel custom designed and in-house manufactured oversized toroidal transformer. In addition to providing an abundance of voltage and current for all operating stages, the transformer’s toroidal shape helps prevent stray radiation patterns from corrupting audio signals as they pass through adjacent circuit stages. Subsequent power supply segments built with tight-tolerance parts including T-Network capacitors provide the exact voltage and current requirements to ensure stress-free signal reproduction.

The RA-1572’s input section is substantially more flexible than that found in most integrated amplifiers. In recognition of the predominance of digital sources available today, the RA-1572 has a built-in state of the art 32-bit/768kHz AKM digital-to-analog converter (DAC) and analog stages of the highest quality. The DAC and surrounding circuitry supports a vast array of source inputs including DSD capable PC-USB (32-bit/384kHz). A front panel USB input is provided for easy connection of a wide variety of music storage devices including Apple iPhones, and laptops. There's even a Bluetooth input with aptX support for superior performance with compatible devices. In addition, two each coaxial (RCA) and optical (TOSlink) inputs provide easy connections for LPCM music sources including popular streaming devices with up to 24-bit word lengths sampled at 192 kHz.

Very usefully, it is possible to fix the level and set an auto-on option with digital inputs for use with devices that provide their own volume control for convenient “hands-off” use. Analog inputs include a pair of balanced XLR connectors in addition to conventional RCA jacks and MM Phono input.

The Class AB output stage uses discrete devices to ensure precise reproduction of all signals regardless of origin with virtually any loudspeaker. The power output, conservatively rated at a robust 120 watts per channel into 8 ohms, is substantial as it is a continuous “both channels driven simultaneously” rating fully in keeping with real-world requirements and Rotel’s tradition of providing extraordinary value. A mono subwoofer output is also provided.

RC-1572 Stereo PreAmplifier
The heart of an uncompromising audiophile stereo “separates” system is the preamplifier. Given that the typical user of separate components has most-probably already invested in good-quality amplifiers, Rotel introduces the new RC-1572 stereo preamplifier (suggested retail USD $1099.00) leveraging the design of Rotel's flagship RC-1590 preamplifier including its 32 bit/768kHz AKM stereo digital-to-analog converter to handle critical signal conversion. Among many refinements, the RC-1572 utilizes relay switching for analog sources instead of an IC based switch to maintain the integrity of the signal path for RCA, phono and XLR inputs. 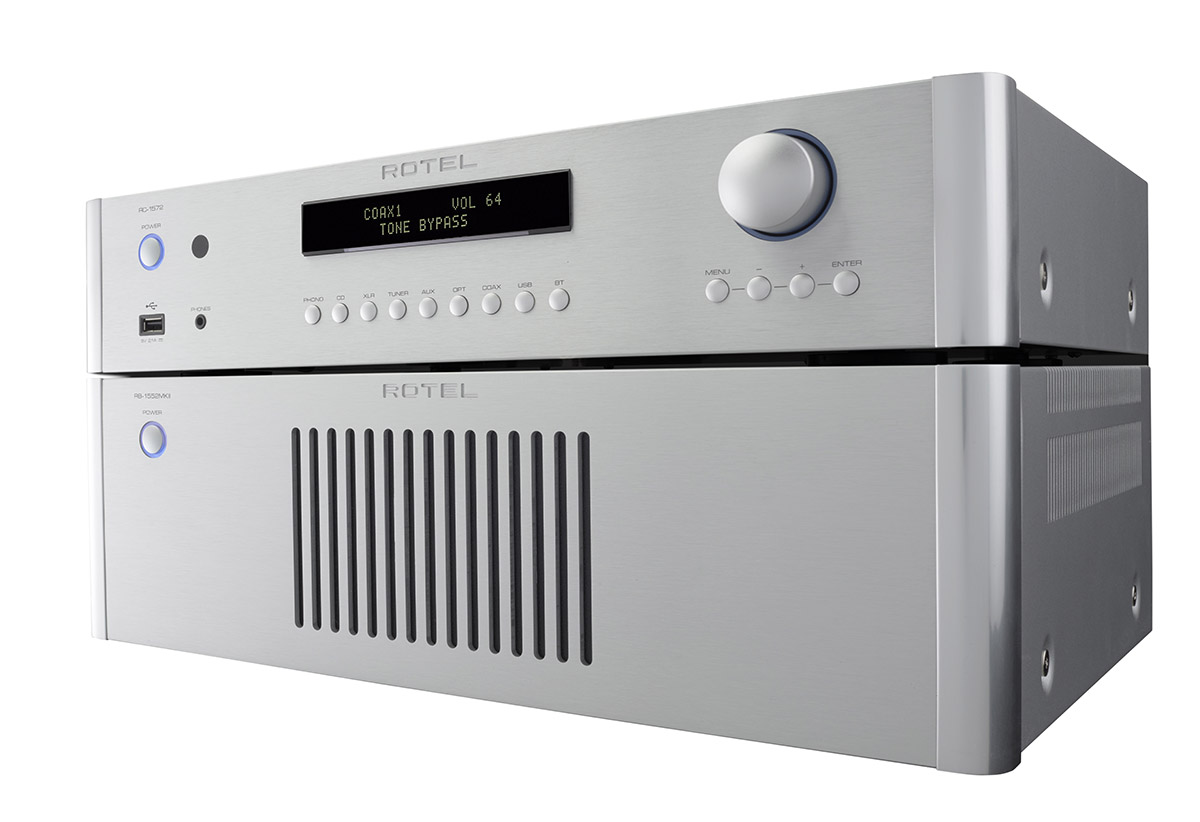 Beneath the clean lines and user friendly fascia of the RC-1572 lies highly sophisticated engineering. Both analog and digital sources have been given equal consideration as today’s listener often has several digital sources, but may also enjoy legacy formats like vinyl LPs. A large toroidal transformer and regulated power supply ensures stable current and voltage requirements to all stages under dynamic conditions. Premium circuit components have been selected only after extensive listening evaluations. Careful routing of all low level signals has been practiced to ensure impressive signal to noise levels. The result is effortless musical dynamics, impressive detail and scale.

The RC-1572 stereo preamplifier is also extremely flexible. Four digital inputs (2 coax and 2 optical), support up to 24bit/192KHz audio, plus the rear PC-USB handle digital sources up to 32/384 resolution. The 4 inputs are designed for sources such as TV set-top boxes, flat panel TVs or Blu-ray players for stunning playback. It is also possible to fix the level and set an auto-on option on these sources for use with devices that provide their own volume control. The PC-USB input supports DSD signals, and integrated Bluetooth aptX is also provided. Analog inputs include balanced XLR connectors, perfect for connecting the RCD-1572 via its XLR outputs, in addition to four pair of conventional RCA inputs. A moving magnet phono stage rounds out the source capability. XLR and single ended outputs are provided along with a mono subwoofer output, as are two 12-volt triggers to control on/off operation of an amplifier and/or other components. For custom integration, control options include RS232 on a standard DB9 connector, as well as an Ethernet port for IP control and software updates. In short, the RC-1572 is a tremendous value and the perfect upgrade for owners of older analog-only preamplifiers.

RCD-1572 CD Player
Since 1982, when the CD was introduced, Rotel has been refining technology and evolving circuitry to bring extraordinary sound from the familiar silver disc. As most music lovers have a substantial collection of compact discs, Rotel believes that a high quality CD player is still an important part of most music systems - and there might be a market for those users that might be thinking in investing in a "the last CD player." The RCD-1572 (suggested retail price USD $899.00), focuses on every single area of refinement, starting with a new purposely designed and built CD mechanism.

One of the RCD-1572’s most important features is the Wolfson WM8740 digital filter/stereo digital-to-analog converter, originally developed for high resolution sources, and supporting digital signals up to 24-bits in length at sampling rates from 8 kHz to 192 kHz. While those word lengths and sampling speed may seem excessive for CDs delivering data at far lower rates, Rotel says this adds reserve capability to ensure proper reproduction under all circumstances, enhancing the crucial link between a CD’s digital data and the analog world in which we listen.

The post-converter analog circuitry benefits from Rotel‘s decades-long experiences in crafting the finest sounding pathway from the DAC’s internal output to RCA and XLR rear panel connectors that bridge the gap between the RCD-1572 and down-stream components. All circuit components – resistors, capacitors, inductors – are chosen only after their positive contribution to sound quality were quantified and verified qualitatively by extensive listening sessions.

All of these circuits draw on a power supply based on an oversized custom Rotel-designed and precision-manufactured toroidal power transformer that, in turn, feeds precise rectifiers, tight-tolerance voltage regulators, and advanced Slit-Foil low-ESR storage capacitors, all globally sourced to ensure musically accurate operation under even the most demanding conditions. This is all part of Rotel’s long-proven Balanced Design Concept, and another way of assuring that the RCD-1572 will remain a reference-level music system for years to come.
www.rotel.com
related items