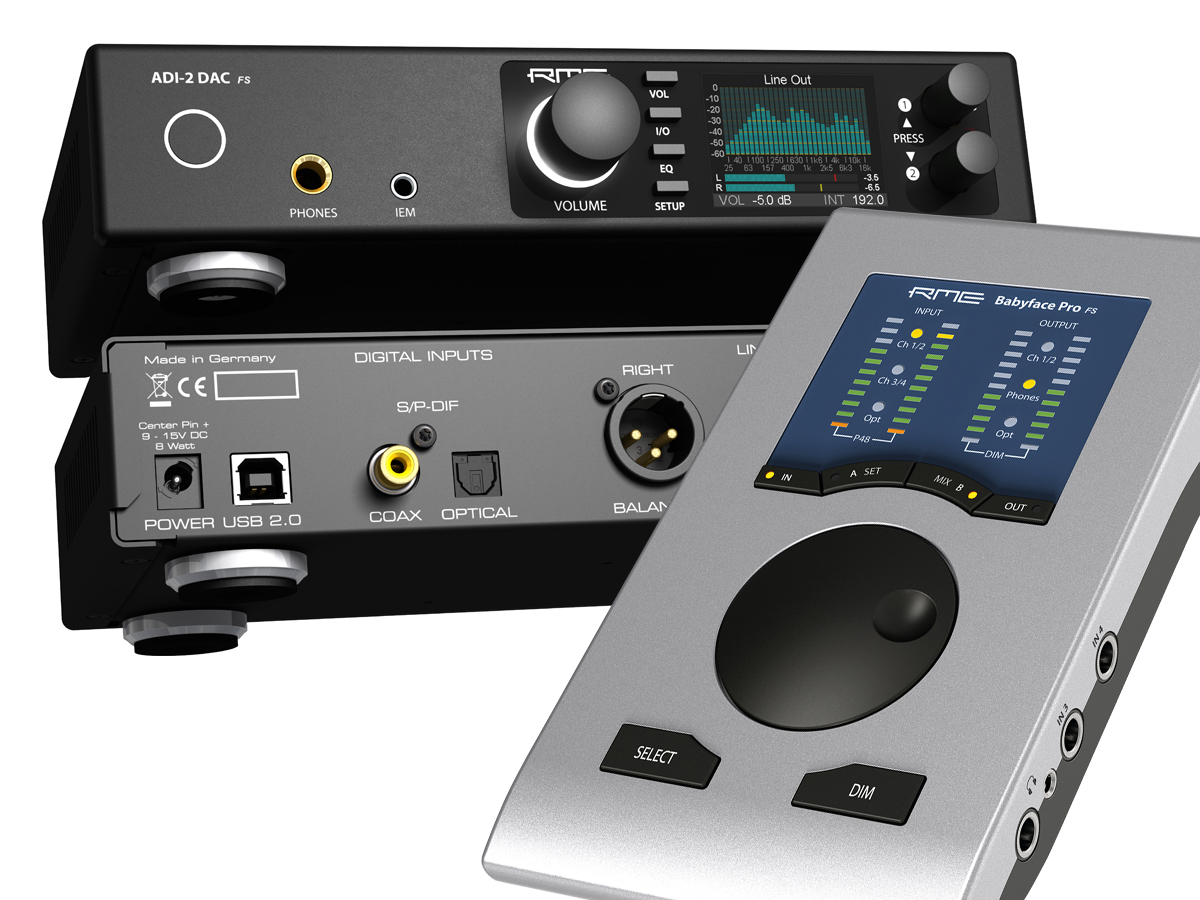 With the ADI-2 DAC, RME has created a high-quality and flexible stereo digital-to-analog converter that has taken the hearts of home users and the hi-fi scene by storm. The device is now available in a slightly revised version. The use of an AK4493 (previously 4490) improves the signal-to-noise ratio from 117 dB to 120 db (123 dBA). At the same time the distortion decreases by about 10 dB, to a fantastic -120 dB at full digital level.

The sensational -118 dBu, which resulted in complete freedom from noise at the IEM output, is now even better at -120 dBu. On top there is now an additional headroom of 2.5 dB for the analog outputs XLR, RCA and IEM, which also raises the undistorted intersample peak limit to a generous +4 dBFS. While the basic features and functions of the ADI-2 DAC remain unchanged, the device comes with an extended infrared remote control, the MRC (Multi-Remote-Control) which can remote control up to 4 different future RME devices. Currently only the ADI-2 DAC is supported. 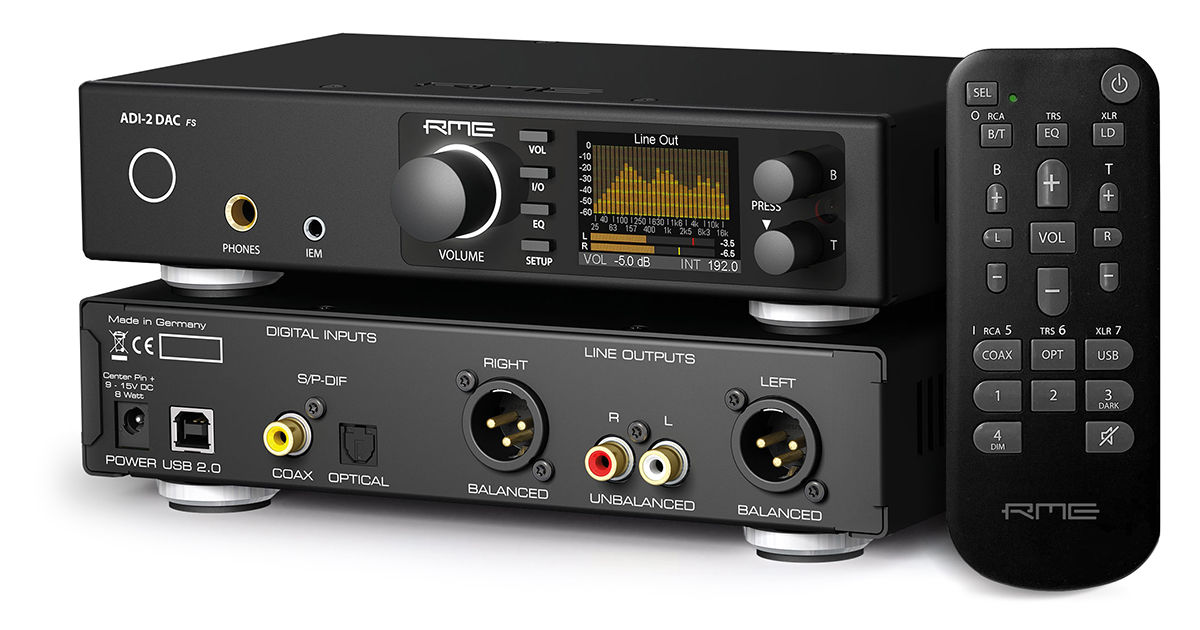 The remote control is an extended version of the previous one, with additional buttons designed for the most commonly used functions, namely switching loudness, parametric EQ, and bass/treble on and off. In addition, there are keys for direct control of bass, treble and balance. With these additional keys, all typically used functions of the device are now directly accessible. The four programmable buttons 1 through 4, a unique feature already of the original remote, can still be programmed with a personal selection of 32 commands/actions.

Babyface Pro FS
The new RME Babyface Pro FS is a completely refreshed 24-channel, 192 kHz, bus-powered USB audio interface of the model introduced four years ago, and which demonstrated RME’s absolute commitment to superior craftsmanship, not only in audio circuits and driver development, but also in mechanics. Created with the highest precision from a block of aluminum, this high-end portable interface incorporated newly designed analog and digital circuits. Its innovative energy saving technologies provided supreme fidelity with no compromises in level, noise or distortion.

In the new Babyface Pro FS even more improvements were implemented, including a +19/+4 dBu switch on the bottom that adds a direct way to reduce the output level, thus improving SNR for sensitive active monitors, avoiding distortion/overload, and helping to keep TotalMix FX faders near 0dB instead of high attenuations. The full SteadyClock FS circuit, as in the ADI-2 Pro FS, allows for lowest jitter and highest jitter immunity, while the 3.5 mm TRS phones output power rises from 70 mW to 90 mW. THD of both phones outputs is improved by up to 10 dB using the same output op-amps as the ADI-2 Pro. Output impedance of the 3.5 mm TRS output was also lowered from 2 Ohms to 0.1 Ohms. 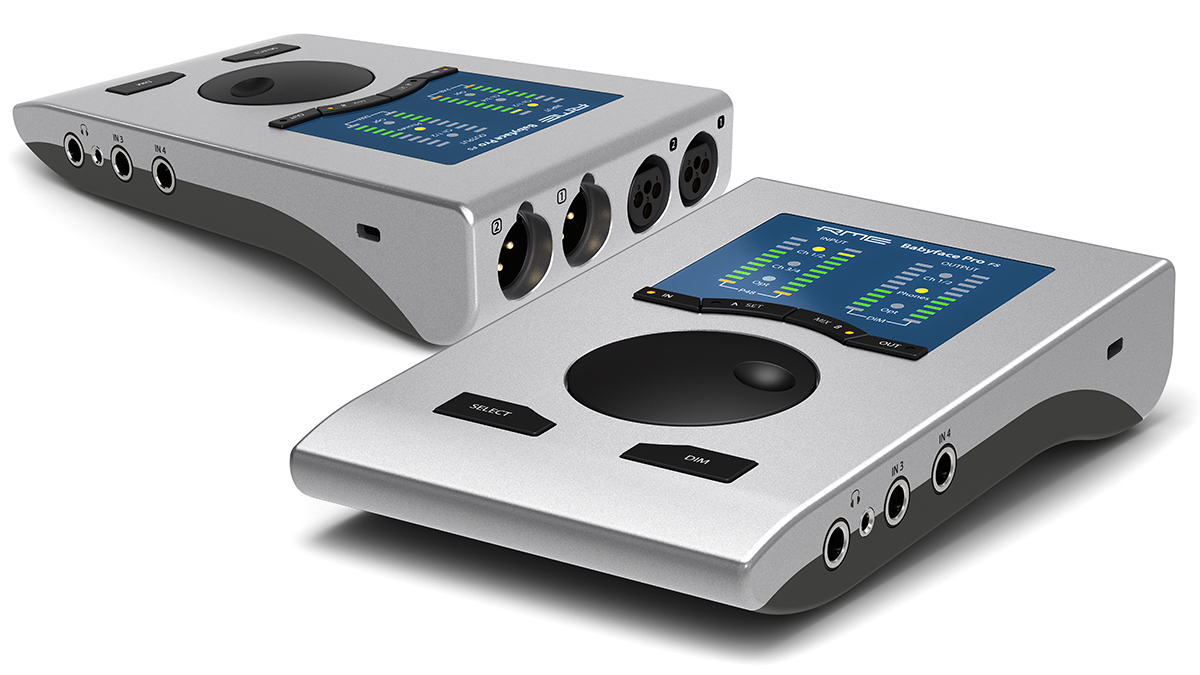 For recording applications, the microphone inputs SNR on the Babyface Pro FS was improved from 112.2 dB to 113.7 dB, while the TRS Line inputs SNR was improved from 114 dB to 116.3 dB (120 dBA). THD Line inputs were also improved by 8 dB. Another key improvement was 6 samples less latency on the AD side (with 5 samples in the AD stage, and 7 samples on the DA, it won't get quicker...). All these improvements were achieved without raising the units power consumption, and the new Babyface Pro FS interface now also includes a K-slot (Kensington Lock) for theft protection.

Drivers and OS Compatibility
Meanwhile, RME has been highlighting the fact that its interfaces are already compatible with the latest macOS Catalina 10.15.x. Since RME drivers are written in-house and not outsourced to third party developers, RME’s users are able to update their firmware immediately and continue working without interruption or delay. This, while several pro-audio manufacturers and interface manufacturers have issued warnings to users advising not to upgrade their operating software, presumably due to compatibility issues with the new Apple macOS - something that is increasingly seen in the industry, unfortunately. Some manufacturers even have issued announcements referencing possible delays in supporting the new operating system, or even loss of data, when Apple provides manufacturers with ample time for updates and beta testing, and offers all the necessary technical support and development tools for free.

"One of the cornerstones of our company has always been customer support and dependability,” commented Derek Badala, Director of Sales, Americas, for Synthax, RME’s U.S. distributor. “We are proud to say that all of our drivers are written in house — unlike many of our competition. Further, updates are automatically handled by FPGA technology, which is present in all our interfaces. The combination of these things — along with our known product dependability — means that our customers will continue to experience superior performance without interruption.”
www.synthax.com
www.rme-audio.de
related items