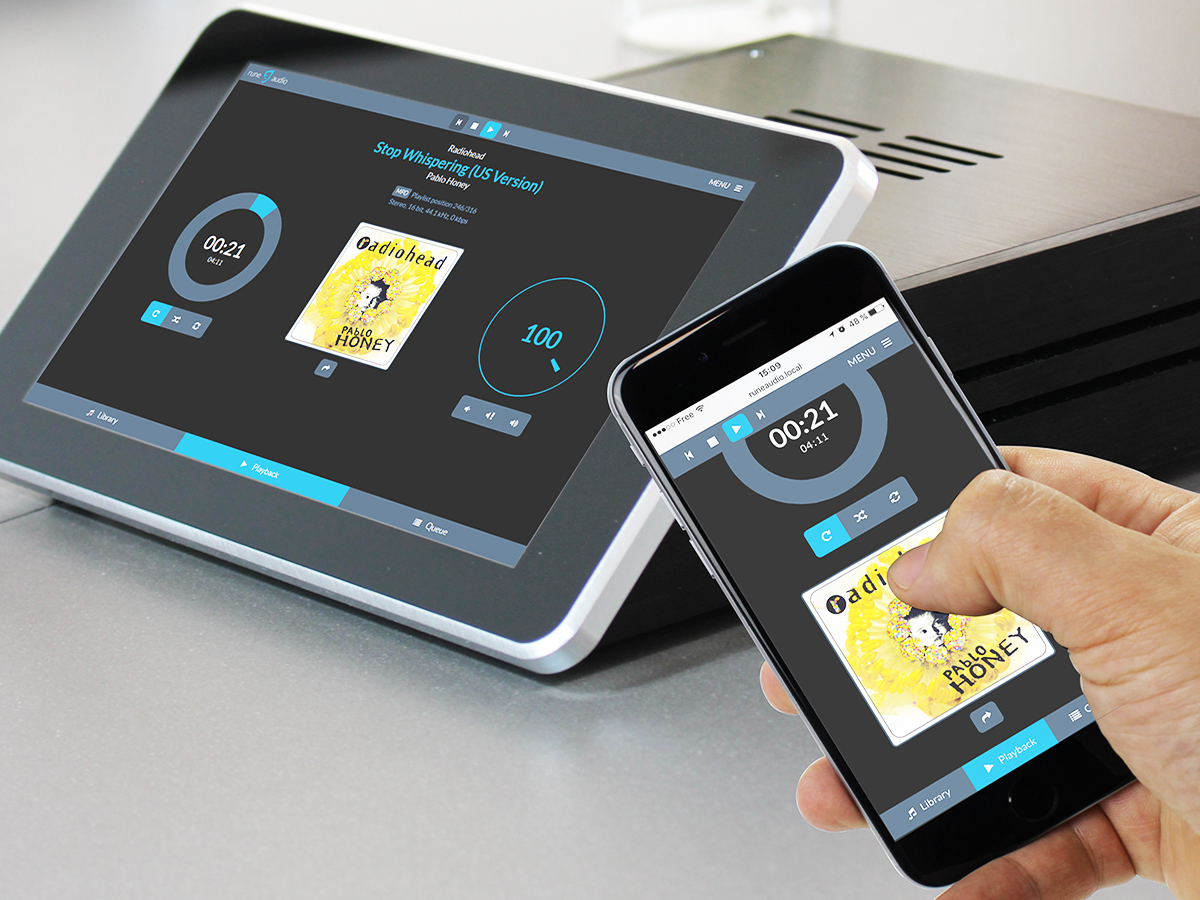 Audiophonics is a 10 years old French company making and selling Hi-Fi products and parts with established partnerships with several suppliers to design and produce high quality module boards and chassis. In September 2014, the company decided to build a hardware audio player based on the Raspberry Pi open platform to play and manage personal music libraries. In October 2015, the company designed its first RaspDAC, a simple and fully functional device, followed short after by its RaspDAC (R)Evolution, combining a new aluminum chassis, OLED display, and ESS Sabre based DAC.

Following the release of the official Raspberry Pi Touchscreen, Audiophonics decided to evolve the concept, designing a new audio player with a touchscreen. In April 2016, they finally had a working prototype and the company decided to go for the crowdfunded route, launching the project on Kickstarter on June 22, 2016. On July 4, the campaign was successfully funded and the RaspTouch is now on target to become a reality.

As Audiophonics explains, the RaspTouch was developed to offer a simple, stylish, affordable and, above all, High-Res compatible solution for audio and electronics enthusiasts, completely based on Open Source solutions. By using Raspberry Pi, Audiophonics allows users to choose the software solution that is best adapted to their needs. Open source solutions like piCore Player, KODI, Raspbian and Rune Audio, have been tested and they work with RaspTouch. However for those looking for a ready to use product, the RaspTouch player can be ordered pre-configured with the Rune Audio player (www.runeaudio.com) - a free and open source software that turns embedded hardware into Hi-Fi music players. 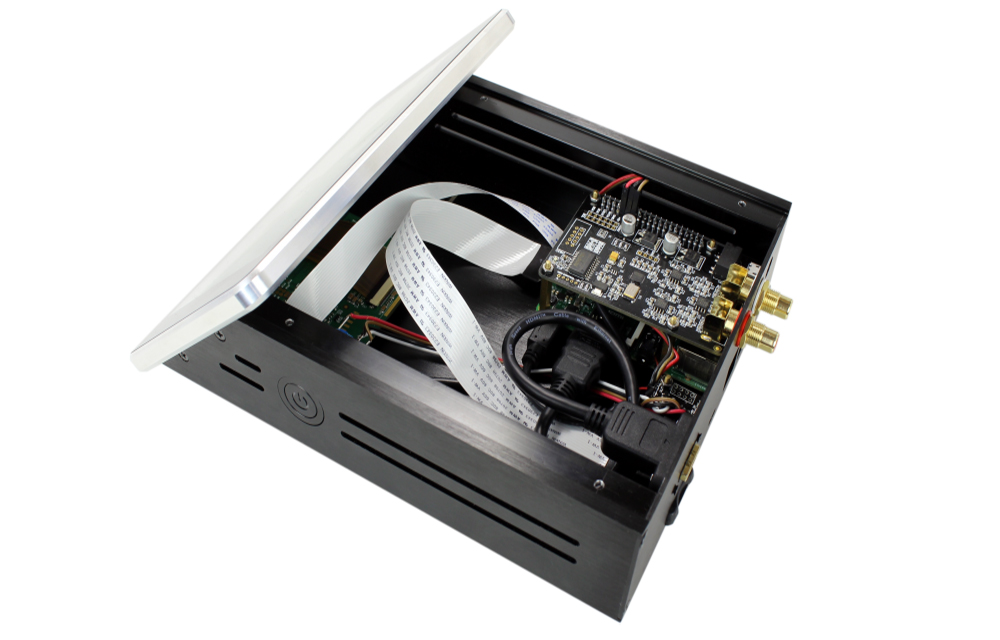 All the different RaspTouch options were designed for DIY enthusiasts in mind, allowing those who wish to experiment freely with all the open source player options, including those wishing to use the software solution of their choice. On the pre-configured RaspTouch options, there is a choice between a more affordable ESS Sabre ES9023 or the ESS Sabre ES9018K2M digital to analogue converters, the first being an ”all in chip” and “direct output” DAC with integrated linear regulator, but limited to 2A / 4 peak, or the ES9018, with an analog filtering output stage and +/-12V linear power, using separated linear regulation, able to reach 3-4A continuous / 5A peak.

The RaspTouch CNC chassis, available as a separated part, allows users to create experimental projects of all sorts, with or without a touchscreen display, using available official Raspberry Pi parts. The capacitive touch screen interface is also an ideal solution to experiment with Open Source software like Rune Audio, piCore Player, Kodi, and others, including experimenting with home automation control. 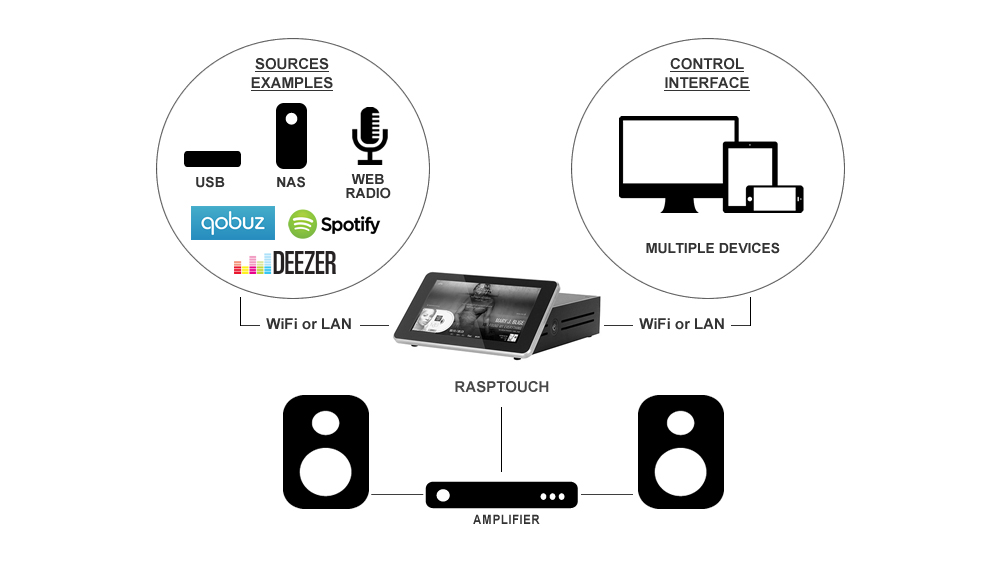 The RaspTouch was designed to work with most music-streaming services, including support for Apple’s AirPlay, DLNA, Chromecast, and Squeezebox, and the ability to play FLAC / ALAC lossless audio files up to 32-bit at 768kHz, uncompressed wav files, and H.264/MPEG-4 AVC video. Hardware specifications are based on the Raspberry pi 3 model-B board, using a Quad Core Broadcom 2837 1.2GHz CPU with 1GB of RAM, supporting Wi-Fi, Ethernet LAN, HDMI out and with four USB 2.0 ports.

Go to the Kickstarter campaign.