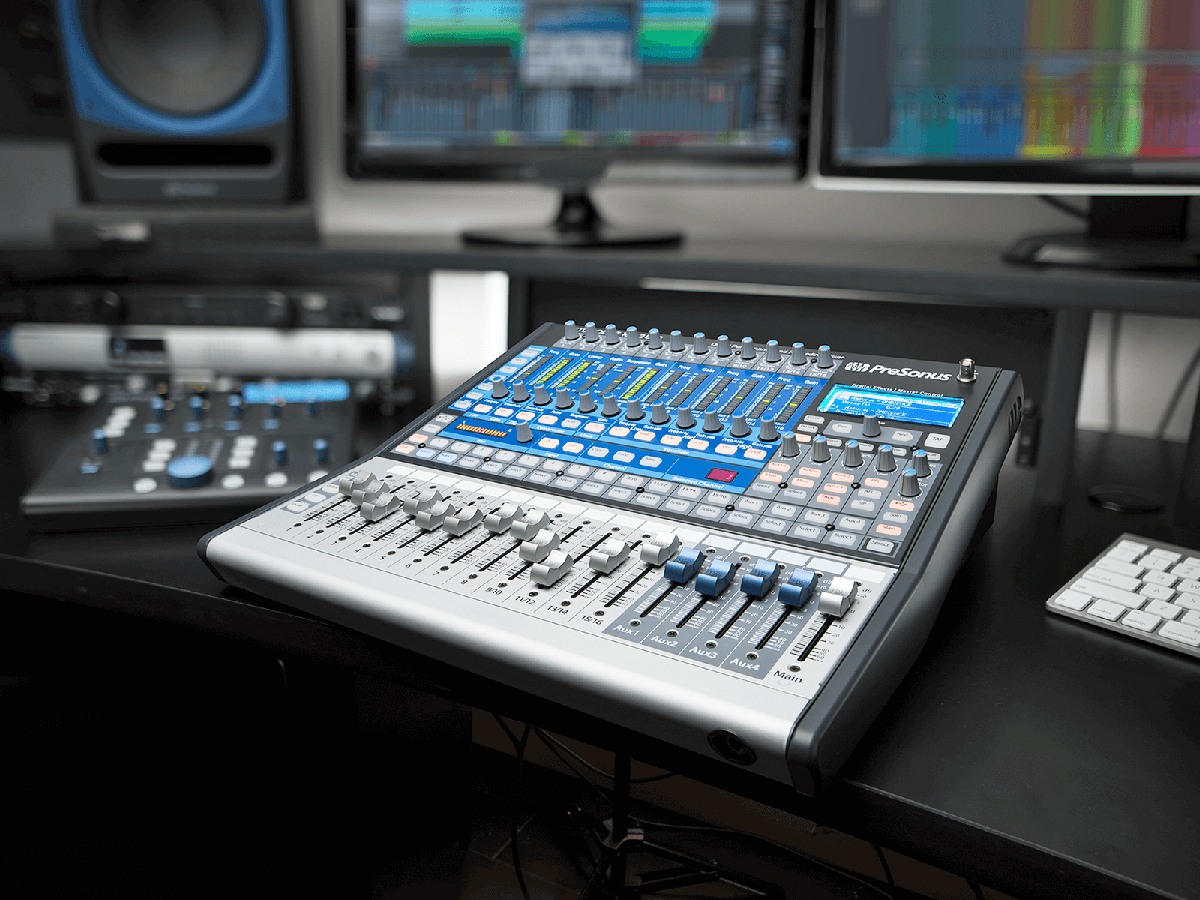 Following up on the success of its popular, award-winning Firewire-based StudioLive 16.0.2 digital recording and performance mixer, PreSonus now announced the new StudioLive 16.0.2 USB, which effectively is a big step back in terms of performance, but makes it possible to offer a compact, portable, and rack-mountable (optional), very affordable mixer. At a U.S. street price of $1,099.95, the new 16-channel StudioLive 16.0.2 USB is so affordable, that it can compete even with analog "utility" mixers, while answering the needs of both studio recording and live sound applications.

This makes the PreSonus StudioLive 16.0.2 USB ideal for small bands, personal studios, intimate clubs, small churches, community organizations, rehearsal spaces, and other applications where a compact, live-mixing and recording system at a bargain price is needed, and users don't really need the advanced features such as mixer subgroups and channel inserts, and can perfectly live with "good old" USB 2.0 data rates.

Otherwise, the new StudioLive 16.0.2 USB offers the same audio quality as the original StudioLive 16.0.2, including 32-bit floating-point processing; XMAX Class A mic preamps; and 24-bit, 48 kHz Burr-Brown digital converters with 118 dB dynamic range. Its feature set and familiar, analog-like mixing surface are virtually the same. However, the new mixer replaces the older unit’s FireWire 400 recording and control interface (limited to 400 Mbit/s) with an 18x16 USB 2.0 interface (480 Mbit/s) that works with any Mac or Windows audio software that supports Core Audio or ASIO. For the PreSonus StudioLive AI range, like the comparable StudioLive 16.4.2AI mixer, PreSonus had already adopted faster Firewire 800 interfaces (and which can easily be connected to Thunderbolt ports using a simple adapter).

Without investing in a completely new USB 3.1 Gen 2 platform (which can go up to 10Gbps), with USB-C connectors, or compromising with a time-limited, discontinued alternative of USB 3.1 Gen 1 at 5Gbps, which uses the familiar USB-A or USB-B connectors instead of the new "universal" USB-C connector, PreSonus was able to release a fully featured digital mixer at a very affordable price, while benefiting from wider compatibility with current products. 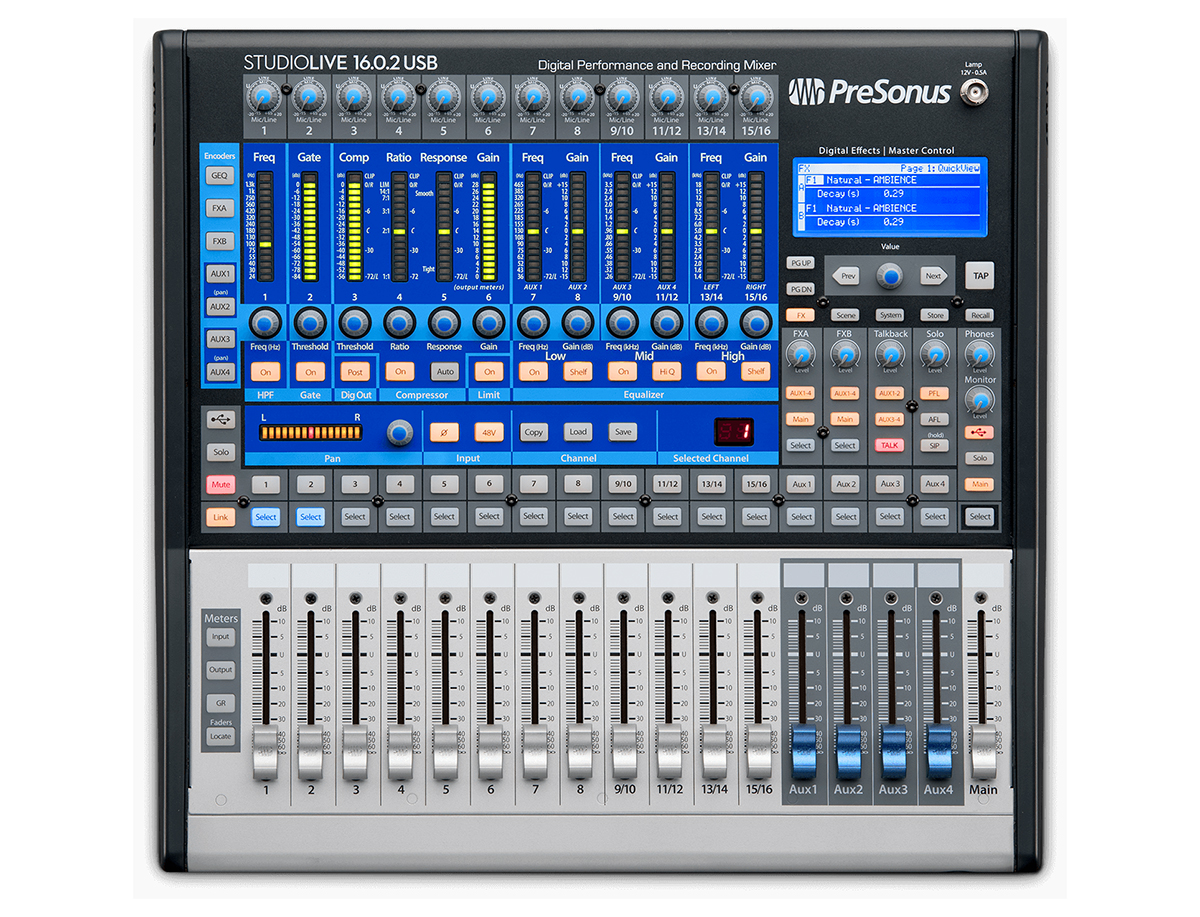 With the StudioLive 16.0.2 USB users can still get four aux sends — enough to handle monitors for a small band or event — and the adjacent channels and aux buses can be stereo linked. A stereo, 31-band graphic EQ serves the main bus. And the 16.0.2 USB's Fat Channel processing section provides a full complement of processing, including a, compressor, limiter, downward expander, and 3-band semi-parametric EQ available on every channel, every aux bus, the two onboard effects outputs, and the main bus. The Fat Channel also offers extensive LED metering; mixer save/recall; and channel-strip save/recall/copy/paste. The new mixer also sports a pair of programmable, stereo, 32-bit floating-point effects processors, loaded with reverb and delay presets and assigned to dedicated FX buses. For the price, it is a really great value.

Standard 5-in DIN MIDI In and Out provide MIDI control over key mixer parameters. With the tap of a toe, users can recall over-all volume settings, effects settings and assignments, and global mixer Scenes, including individual channel levels and all 130 Fat Channel signal processors.

Connected to such state-of-the-art recording and control software, and with its tightly integrated USB 2.0 interface, the new StudioLive 16.0.2 USB delivers everything needed for small-scale studios and small combo live applications. The mixer is expected to ship in late summer with a U.S. street price of $1,099.95, bringing high-quality mixing and recording capabilities to musicians who, until now, could never have afforded them.
www.presonus.com/products/StudioLive-16.0.2-USB
related items