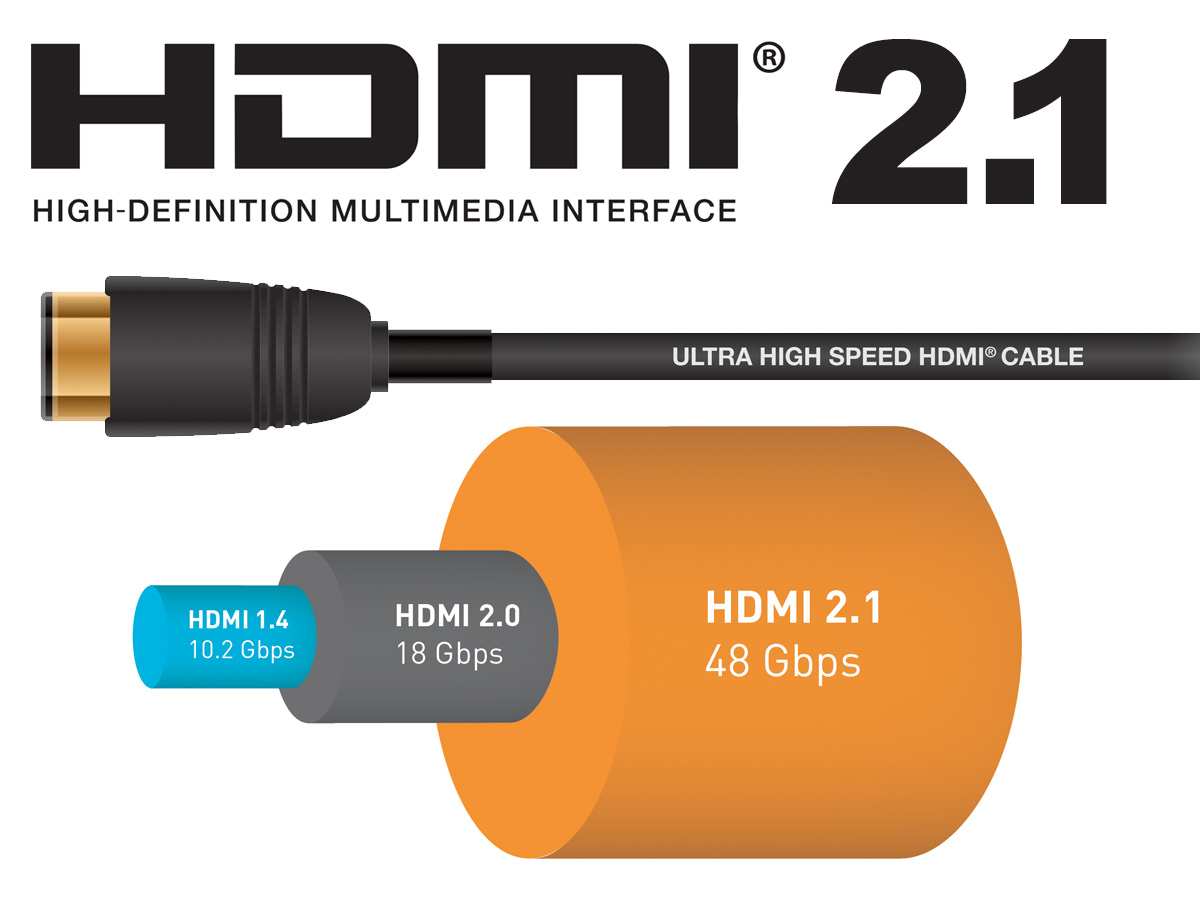 The HDMI Forum released Version 2.1 of the HDMI Specification on November 28, 2017 which is now available to all HDMI 2.0 adopters. This latest HDMI Specification supports a range of higher video resolutions and refresh rates including 8K60 and 4K120, and resolutions up to 10K. Dynamic HDR formats are also supported, and bandwidth capability is increased up to 48Gbps.

Supporting the 48Gbps bandwidth is the new Ultra High Speed HDMI Cable. The cable ensures high-bandwidth dependent features are delivered including uncompressed 8K video with HDR. It features exceptionally low EMI (electro-magnetic interference) which reduces interference with nearby wireless devices. The cable is backwards compatible and can be used with the existing installed base of HDMI devices.

HDMI 2.1 includes a home theater feature called eARC, or Enhanced Audio Return Channel, which will ensure forward compatibility between audio devices such as a Sound Bar, A/V Receiver (AVR) and TV. eARC is designed to deliver forward compatibility because it removes the audio device from the video path. Ultra High Speed HDMI Cables are designed to support the new eARC feature in addition to the highest resolution video modes. The Standard HDMI Cable with Ethernet and the High Speed HDMI Cable with Ethernet will also support eARC.

With a conventional AVR, both the audio and video flow through the AVR and onto the TV. With eARC, the TV sends an audio-only eARC signal to the AVR. This keeps the AVR out of the video stream, which dramatically extends the lifetime of AVRs in today’s home theater systems.

HD and 4K/UHD TVs let consumers create a home theater with immersive video and surround sound, which can fully reproduce the movie theater experience. Until now, configuring and using these systems has been complicated and often inconvenient. Mixing and matching audio and video devices from different manufacturers doesn’t always work smoothly, often requiring the use of two remotes in order to switch inputs, control volume, and so forth. The HDMI 1.4 Audio Return Channel (ARC) feature improves this somewhat, but it does not offer the full audio performance of HDMI.

eARC technology provides a dedicated audio link within the HDMI cable, which substantially improves compatibility, simplicity of use, and audio performance. This audio link utilizes the two pins used for the HDMI Ethernet Channel and ARC feature: a dedicated differential pair providing a “system within a system,” specifically for high performance audio. The eARC pair has its own dedicated discovery and control functions, enabling it to operate independently of the HDMI version in use, and providing a “green field” for creating compatibility among products from different manufacturers.

The differential signal used in eARC can transmit the full bandwidth of HDMI audio, up to 8 channels of 24-bit, uncompressed 192 kHz audio. This can enable up to 32 channels of audio as well as all of the well-known compressed audio formats, including Dolby Atmos and DTS:X. The dedicated control signal also transmits lip sync information to ensure that audio and video work together seamlessly in a home theater. A heartbeat signal is continually transmitted by the audio device to the television. This heartbeat signals the television to mute its own speaker automatically, and un-mute in case of signal loss.

Version 2.1 of the HDMI Specification is backward compatible with earlier versions of the specification, and was developed by the HDMI Forum’s Technical Working Group whose members represent some of the world’s leading manufacturers of consumer electronics, personal computers, mobile devices, cables and components.

Higher video resolutions support a range of high resolutions and faster refresh rates including 8K60Hz and 4K120Hz for immersive viewing and smooth fast-action detail. Resolutions up to 10K are also supported for commercial AV, and industrial and specialty usages.

Dynamic HDR support ensures every moment of a video is displayed at its ideal values for depth, detail, brightness, contrast and wider color gamuts—on a scene-by-scene or even a frame-by-frame basis.

The Ultra High Speed HDMI Cable supports the 48G bandwidth for uncompressed HDMI 2.1 feature support. The cable also features very low EMI emission and is backwards compatible with earlier versions of the HDMI Specification and can be used with existing HDMI devices.

eARC simplifies connectivity, provides greater ease of use, and supports the most advanced audio formats and highest audio quality. It ensures full compatibility between audio devices and upcoming HDMI 2.1 products. 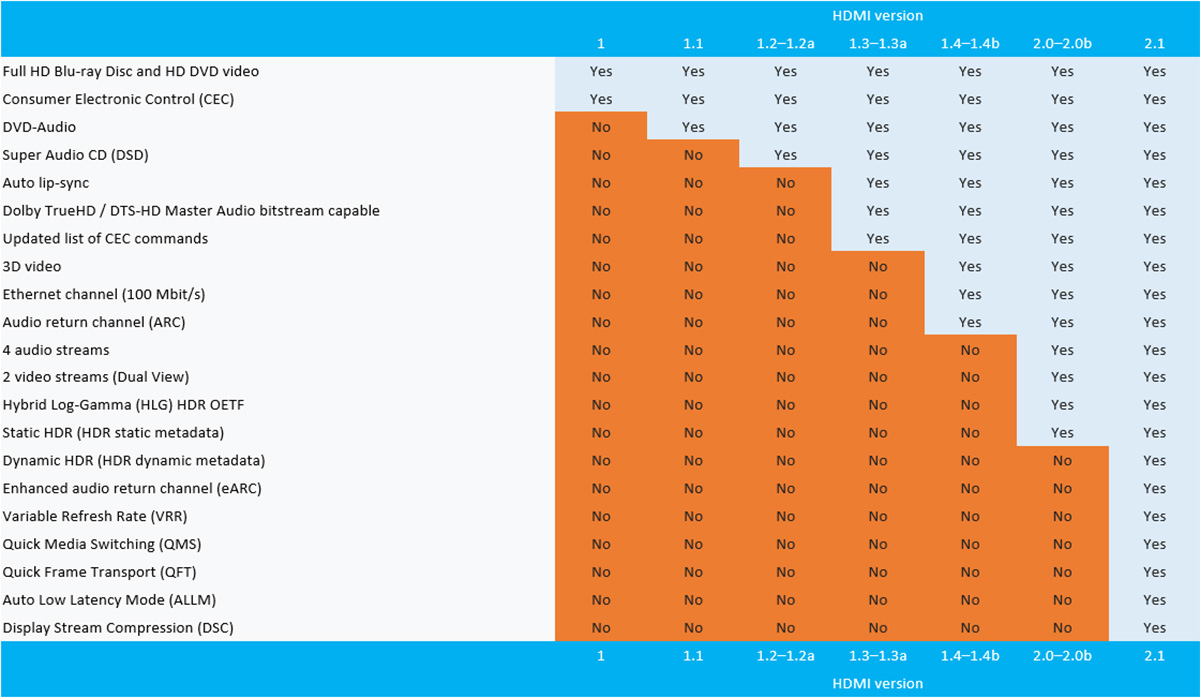 Enhanced refresh rate features ensure an added level of smooth and seamless motion and transitions for gaming, movies and video. They include:

Variable Refresh Rate (VRR) reduces or eliminates lag, stutter and frame tearing for more fluid and better detailed gameplay.
Quick Media Switching (QMS) for movies and video eliminates the delay that can result in blank screens before content is displayed.

The HDMI 2.1 Compliance Test Specification (CTS) will be published in stages during Q1-Q3 2018, and HDMI adopters will be notified when it is available.
www.hdmi.org | www.hdmiforum.org
related items