NBASE-T Alliance and Ethernet Alliance to Unite Through Merger 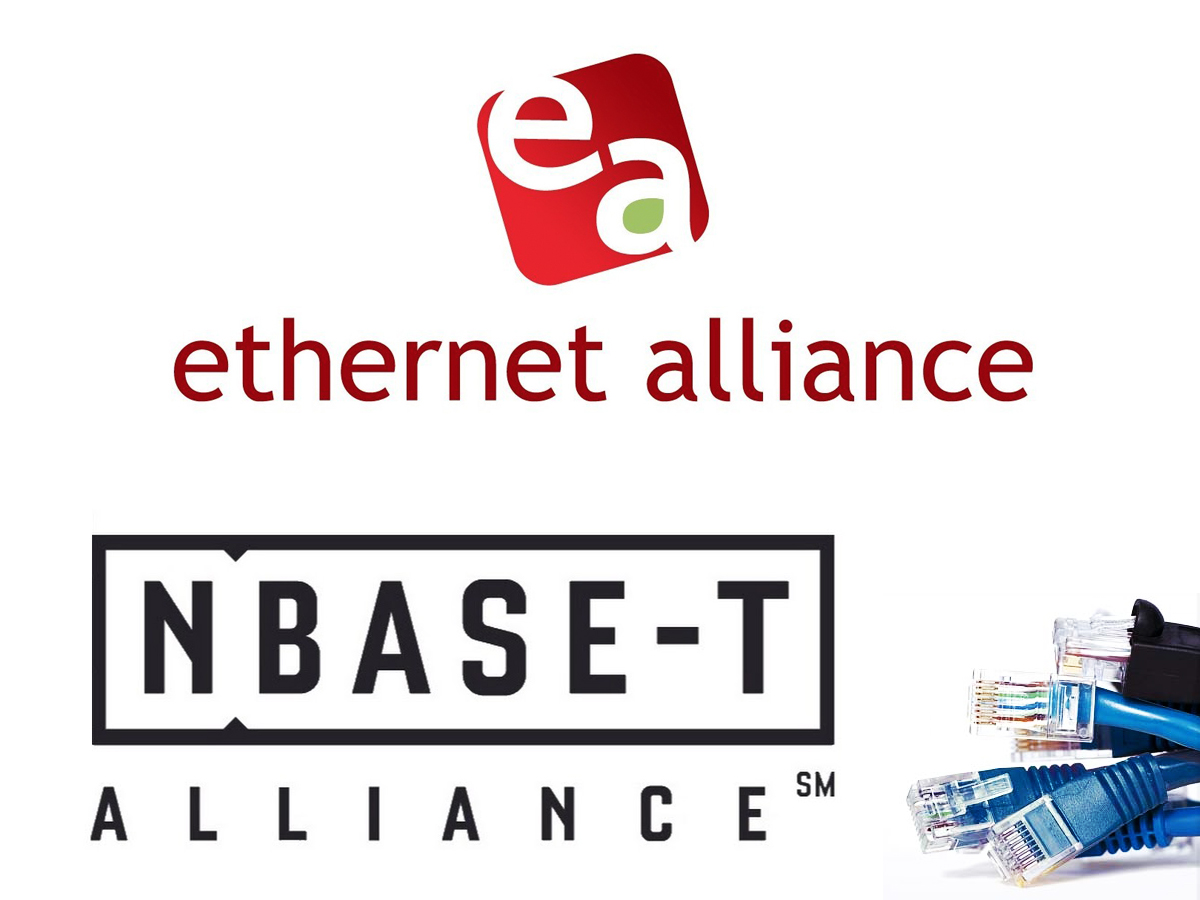 This merger is a significant milestone for the Ethernet community. Due to the rapid growth of ever-more powerful mobile devices and richer content like video, networks are struggling to keep pace with rising bandwidth demands. Adoption of advanced wireless connectivity technologies, such as 802.11ac WiFi, small cells and powerful workstations that handle large data files, means that network-access speeds would benefit immediately if they could move beyond their designed limits of 1 Gigabit per second (Gbps), at least to 2.5 Gbps and 5 Gbps. NBASE-T technology supports these faster speeds without requiring a cable upgrade.

NBASE-T technology defines a new type of Ethernet signaling that boosts the speed of installed based twisted-pair cabling well beyond the cable’s designed limit of 1 Gigabit per second (Gbps) for distances up to 100 meters. Capable of reaching 2.5 and 5 Gbps using the large installed base of Cat5e and Cat6 cabling, NBASE-T solutions enable users to accelerate their networks in the most cost-effective, least disruptive manner.

The NBASE-T Alliance was founded in 2014 to build consensus and help streamline the development of a new 2.5G/5G Ethernet standard. That standard, IEEE 802.3bz, was approved in September 2016 and is compatible with specifications published by the NBASE-T Alliance. With hundreds of products shipping, the alliance was now focused on publishing optimizations to the specification, facilitating interoperability and educating the market about the multiple applications of the technology.

The Ethernet Alliance serves as the premier global repository for all things Ethernet, helping keep everyone with an interest in Ethernet aware of advancement and innovations in the technology. The merger agreement with the NBASE-T Alliance serves as a significant growth milestone for the Ethernet community and represents four years of collaboration between the organizations, including joint market research, member plugfests and support of the IEEE 802.3bz 2.5GBASE-T and 5GBASE-T Ethernet standard development.

"Ethernet has become the world’s most popular networking technology, and the Ethernet Alliance has been busy fulfilling its mission of advancing and promoting the family of IEEE 802 standards that will carry Ethernet forward today, tomorrow, and into the future. As the Ethernet roadmap expands, NBASE-T technologies focused on 2.5GBASE-T and 5GBASE-T have become an integral part of the industry ecosystem, and we consider this merger a natural, evolutionary step,” says Greg McSorley, Ethernet Alliance President. “The demand for faster, more reliable high-speed connectivity is exploding across many market segments. We can better meet this growing need by combining our resources, membership and expertise.” 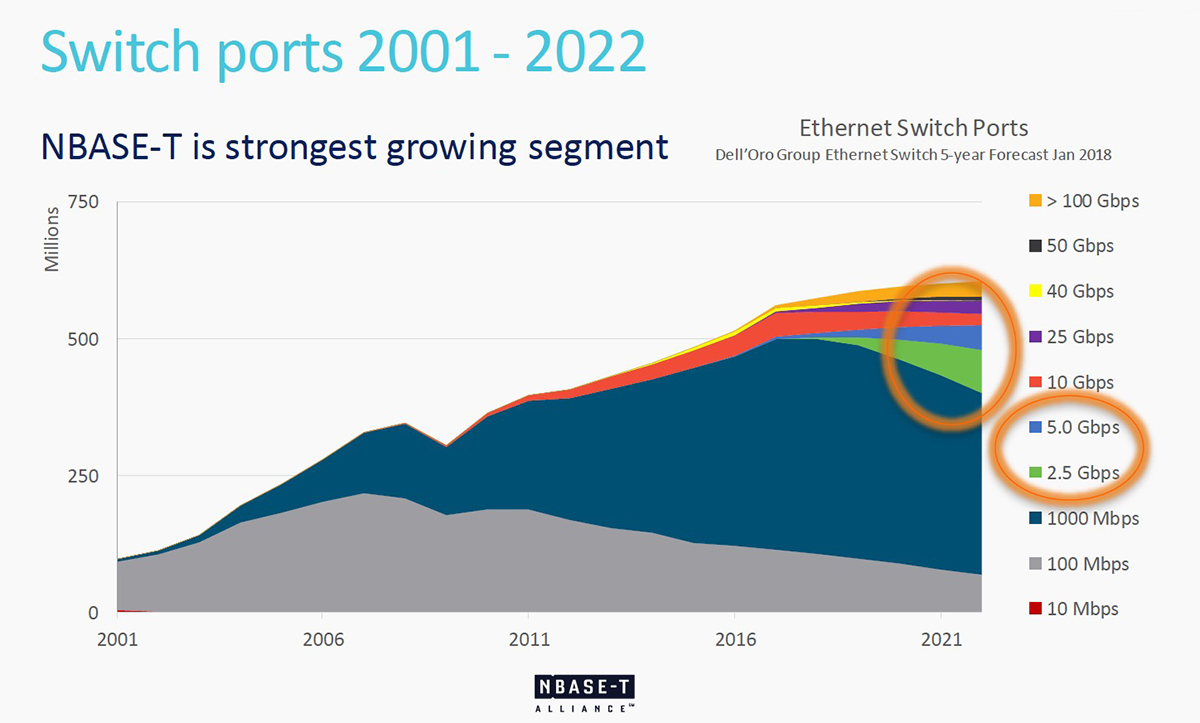 Delivering up to 2.5 Gbps or 5 Gbps to the 1.3+ billion installed base of Cat5e and Cat6 outlets, NBASE-T solutions can transform networks in the most cost-effective, least disruptive manner. A complement to the IEEE 802.3bz 2.5GBASE-T and 5GBASE-T standard, the NBASE-T specification includes NBASE-T Downshift that dynamically selects the maximum sustainable speed for a particular cable. Flexible silicon solutions can auto-negotiate the optimal network speed, be it the new NBASE-T rates, slower 100 Mbps and 1 Gbps rates, or — if the network infrastructure supports it — 10 Gbps.

“In just over four years, the NBASE-T Alliance member companies helped build consensus within the IEEE 802.3 Ethernet Working Group, enabling approval of a new 2.5G/5G Ethernet standard, and deployed the technology so it is now entrenched in multiple markets well beyond our target industries. With the momentum growing stronger every day, the time is right to consolidate the strength of our members with the Ethernet Alliance, the leading voice of Ethernet technology, to ensure NBASE-T, and all Ethernet technologies, continue to best serve the needs of the market,” says Peter Jones, NBASE-T Alliance Chairman.

“NBASE-T technology is significantly impacting the market with the biggest transition we’ve seen in campus switching since 2000,” adds Tam Dell’Oro, Founder and CEO of Dell’Oro Group. “We see 802.11ax driving the continued growth and expansion of NBASE-T adoption in a vast range of markets and, across the industry, NBASE-T technology is clearly powering a major inflection point in campus networking. The merger of the NBASE-T Alliance into the Ethernet Alliance is a smart way to utilize resources and member company strengths to bolster the success of NBASE-T technology, and all Ethernet technologies, into the future.”

Through this merger, NBASE-T Alliance resources, activities and members will be consolidated into the Ethernet Alliance, increasing the focus on mainstream BASE-T Ethernet technology. All NBASE-T technology specifications and the alliance’s library of resources will continue to be publicly accessible.
https://www.nbaset.org | https://ethernetalliance.org
related items