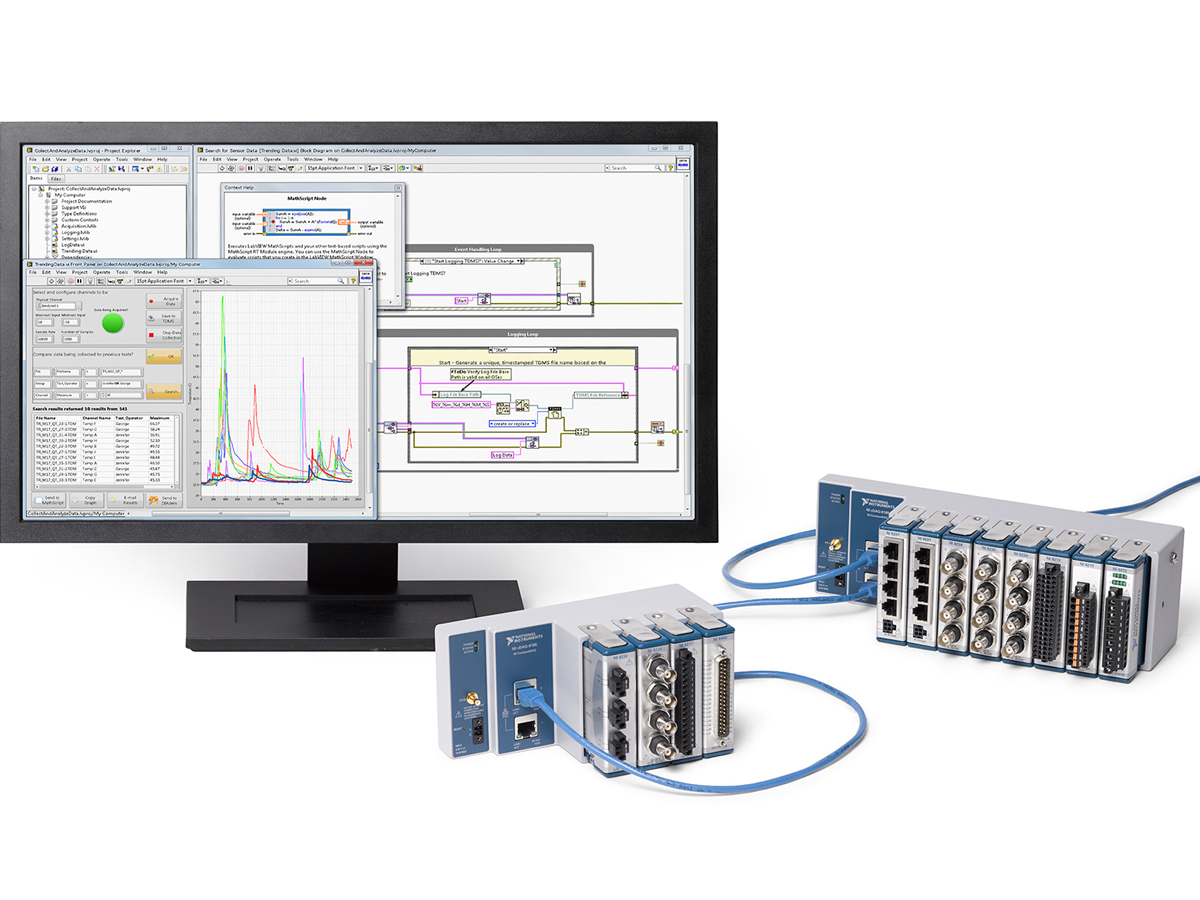 The nature of physical systems test is rapidly changing as measurement systems migrate from the control room to closer to the device under test. While this shortens installation time, reduces the cost of sensor wiring and improves measurement accuracy, it creates challenges with synchronization and systems management, especially using today’s industrial networking technologies. NI is actively working to help define TSN, the next evolution of the IEEE 802.1 Ethernet standard, to deliver distributed time synchronization, low latency and convergence of time critical and general networking traffic. The cDAQ-9185 and cDAQ-9189 provide tight time synchronization with TSN to simplify and improve scalability of synchronized, distributed systems.

Features and benefits include precise synchronized timing over the network, which eliminates the need for lengthy, physical timing cables and ensures tightly synchronized measurements for accurate analysis. Simple daisy chaining through an integrated network switch allows for quick setup and expansion in distributed applications. More importantly, reliable operation in harsh environments with -40° to 70° C operating temperature range, with shock resistance up to 50 g and vibration resistance up to 5 g. As National Instruments highlights, software abstraction through the NI-DAQmx driver automatically synchronizes multiple chassis for simple programming.

For more than a decade, engineers have used CompactDAQ with LabVIEW to quickly customize DAQ systems to meet their application needs. With NI’s investment in the latest technologies for synchronization and communication, the new CompactDAQ chassis are equipped to meet the current and emerging needs of distributed test and measurement applications, delivering high-performance, rugged DAQ systems that can acquire data from highly distributed sensors.

Next Generation of LabVIEW
On the software front, National Instruments announced LabVIEW NXG 1.0, the first release of the next generation of LabVIEW engineering system design software. LabVIEW NXG bridges the gap between configuration-based software and custom programming languages with an innovative new approach to measurement automation that empowers domain experts to focus on what matters most – the problem, not the tool. 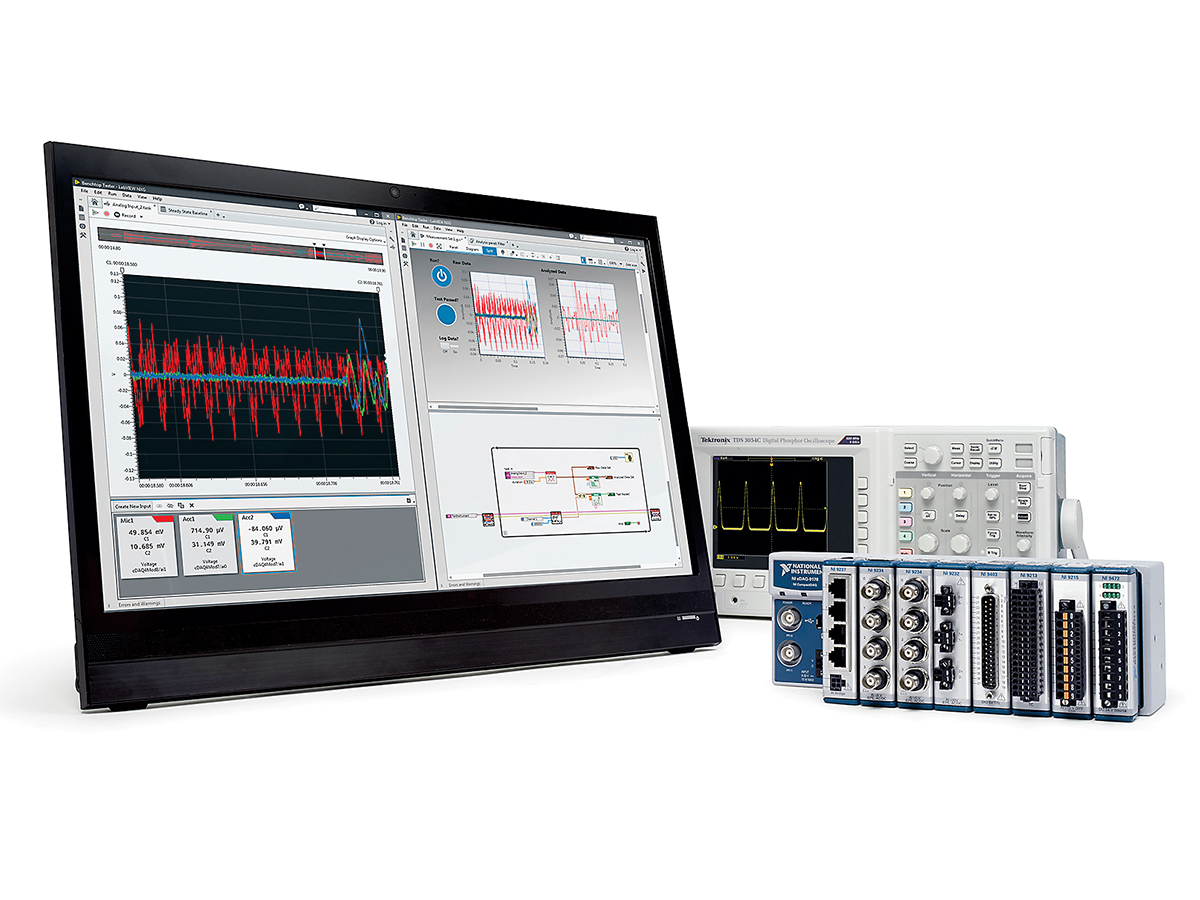 "Thirty years ago, we released the original version of LabVIEW, designed to help engineers automate their measurement systems without having to learn the esoterica of traditional programming languages. LabVIEW was the ‘nonprogramming’ way to automate a measurement system," said Jeff Kodosky, NI cofounder and business and technology fellow, known as the ‘Father of LabVIEW.’ "For a long time we focused on making additional things possible with LabVIEW, rather than furthering the goal of helping engineers automate measurements quickly and easily. Now we are squarely addressing this with the introduction of LabVIEW NXG, which we designed from the ground up to embrace a streamlined workflow. Common applications can use a simple configuration-based approach, while more complex applications can use the full open-ended graphical programming capability of the LabVIEW language, G."

The 1.0 release of LabVIEW NXG helps engineers performing benchtop measurements drastically increase their productivity with new nonprogramming workflows to acquire and iteratively analyze measurement data. These nonprogramming workflows simplify automation by building the necessary code behind the scenes. For instance, engineers can drag and drop a section of code equivalent to 50 lines of text-based code. This is just one of the many ways LabVIEW NXG helps engineers focus on innovation rather than implementation.

LabVIEW NXG introduces a re-engineered editor with functionality that experienced LabVIEW users often request, but it still offers a user experience similar to complementary software in the market. The refreshed editor further extends the openness of LabVIEW to integrate with a broader set of languages. The modernized editor improves programming productivity by streamlining the editor micro-interactions, user interface objects based on vector graphics and zooming capabilities.

As LabVIEW NXG 1.0 improves benchtop measurements, new capabilities in LabVIEW 2017 target the development, deployment and management of large, complex and distributed test and embedded applications. These include features that enhance interoperability with standard IP and standard communications protocols such as IEC 61131-3, OPC UA and the secure DDS messaging standard.

As NI builds on its 30+ year investment in software, LabVIEW NXG 1.0 and LabVIEW 2017 demonstrate NI’s continued investment in the productivity of engineers developing applications that require test, measurement or control with rapid access to hardware and data insights. The first release in the next generation of LabVIEW is planned as the first in a series of fast-paced releases that will expand engineering capabilities from design to test.
www.ni.com/labview | www.ni.com/compactdaq/whatsnew/
related items